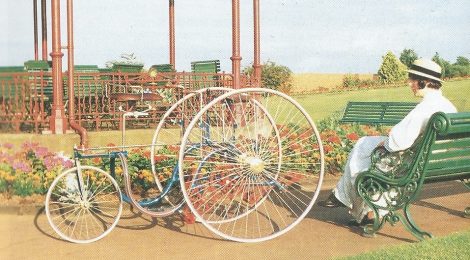 More Than Two Wheels and/or Seats by Ian Bean

As you will have seen in parts 1, 2 and 3, cycling in the early days was mainly the domain of the young and agile.  If you were not in either of these categories, the alternative could well be the tricycle. This could be in single or two-seater versions.

Two seaters came in two forms, the sociable, with riders sitting side by side and tandem, riders one behind the other.  Sociable bicycles were manufactured and ride reasonably well once you get used to the novelty!   During the reign of the Ordinary a tricycle was the only option for women.  The pneumatic tyred safety generally signified the end of the tricycle apart from some specialised delivery versions.

Tricycling could also be a social experience particularly on a two-seater!  The tandem safety bicycle took over this role of social machine.  The tricycle, being more suited to those of a less confident disposition, became popular with older ladies and gentlemen as well as being an introductory mount for the youngster.

James Starley’s Coventry Lever Tricycle of 1877 was developed with chain drive and pedal gear to become the Rotary and gained great popularity.  The Salvo Quadricyle, again by James Starley, followed and incorporated some notable innovations such as lever brakes and a balance gear (differential).  This design, which was really a tricycle as the fourth wheel was intended to only touch the ground in the event of the machine tipping, came to the attention of Queen Victoria who ordered two.  Although it is very unlikely the Queen rode the tricycle it did result in a name change to the Royal Salvo.

Prior to World War 1 the larger tricycles, and multi rider two wheelers, tended to be the reserve of wealthy owners.  The cost of purchasing the machines was one reason, but also the space required to store them, although some manufacturers offered folding machines to allow them to pass through doorways and be easier to store.  The cost of transporting a tricycle by train was much greater than a bicycle.

Some notable individuals were enthusiasts. The Hon. C S Rolls was a keen cyclist and in 1897 became Captain of the Cambridge University Cycling club.  This interest possibly led to his early death, aged 32, in an aeroplane accident.  He got to know the Wright brothers through their cycle making business and purchased a Wright Flyer aeroplane from them.  Rolls rode tandem and a four-seat bicycle, the Cambridge Duad, whilst at university.  Sherlock Holmes could reputedly, identify the impressions left by 42 different cycle tyres and this must surely be due to his creator, Sir Arthur Conan Doyle, being an ardent cyclist and tricyclist.

Some examples from the Beamish Collection – 3 wheels

On closer examination it became apparent that one seat and a complete set of pedals and drive were missing.  The wheel hubs were twisted, and the bearings so worn it would have been impossible to ride.  We speculate that it may have been used as an “invalid carriage” following WW1, possibly pulled by a pony.

Research resulted in a catalogue image of the machine when new.  It was priced at £26, lined in two colours, and advertised as being of especially low weight. Its actual weight is 122 pounds so this would seem a dubious claim!  Fortunately, the missing set of cranks and gears was an exact duplicate of the remaining one, so it proved possible to remake the crank, pedals, and gears.  The intermediate drive gears are a clever arrangement using rollers allowing this gear to act in a similar way to a chain reducing noise and friction.  The two riders power individual front wheels, but there is little tendency for the tricycle to wander.

The forward seat is supplied with spade grip handles one of which allows the rack and pinion steering to operate.  Only one grip was left, and the other three brackets had been broken off, so the two rear brackets required repair and the front bracket and pinion gear were remade.  The frame has a dropped section for the rear rider suggesting a woman’s dress could be accommodated.  This is unusual at this period, social convention considering it unseemly for a lady to face an exercising gentleman’s back.  Perhaps the alternative, the lady steering, was considered unsatisfactory!

Our machine has an unfinished set of teeth on the steering rod adjacent to the rear seat so perhaps steering from the rear seat was being considered.  Braking is provided by two external contracting metal bands, lined with leather operating on drums integral with the front wheel hubs.  A front wheel rim had broken during the tricycle’s hard life and a patch had been rivetted over the break made from a piece of cycle rim.

We tried to weld this break using every technique available to us at the time without success.  In the end, the original patch was re-riveted to the rim which is perhaps the best solution as it tells an interesting story.  The frame was carefully rubbed down revealing two paint schemes under the coat of tarry black.  Both schemes were recorded before the original cobalt blue scheme was re-applied.

Our tricycle is single speed and fitted with pneumatic tyres, although many carried solid rubber “cushion” covers.   To cater for the considerable weight which can be carried the machine has drum brakes on the front wheels and a lever operated rubber block stirrup brake on the rear.  The box and forward part of the frame are attached to each other, allowing the rider to steer using the handlebar affixed to the back of the box.  The hub brakes are operated from a lever on the bars and a locking device allows the brakes to be permanently applied when the tricycle is stationary.

The original design suffered from an unarticulated frame which on rough ground could allow the centre, driving, wheel to be left in the air.  Later machines had a hinge point added to add a degree of flexibility.  The post office became interested in the design and they were issued to post men in the Horsham area.

The pentacycle was (is) difficult to steer, and very hard work in hilly areas so its popularity was short lived.  Fitted with a simple spoon brake and fixed wheel it takes a lot of stopping on an incline. The replica (as far as known no originals survive) at Beamish is used during transport events and is always popular with visitors.

Trailers and Sidecars – In the days when only well-off people could purchase cycles the lack of carrying capacity was not a great problem.  If luggage, or goods, needed to accompany the rider, they could be forwarded by rail and collected on arrival.  By 1900 the towing of a trailer was being thought of as a possibility.

Manufactured trailers were marketed by 1903 and the Graham Brothers patented a sidecar suitable for bicycles or motorcycles in the same year.  Sidecars and trailers could be used for carrying goods and passengers and removed when not required.  The “chair” was often made from wicker this being light and strong.  The early sidecars were mounted to the cycle in a rigid manner restricting access to storage sheds or alleyways and causing strain to the cycle frame.  The bicycle sidecar lost out to its powered equivalent during the 1920s.

Two things caused a resurgence in its popularity.   Fred Watson, of Watsonian Sidecars patented a pivoted connection which allowed the frame to fold up for storage and the rider to bank over on corners.   This flexible mount, utilising a much smaller wheel, appeared after the depression of the early 1930s and became popular with those families that were unable to afford, or did not want, a motorised vehicle.

1930s BSA Tandem – This cycle, made by the Birmingham Small Arms Co., is nearing the end of a long and meticulous restoration.  It is fitted with hub brakes and a 3 speed Trivelox, derailleur type gear.  This design became popular in Britain as British riders expected chains to last a lifetime!  In the usual derailleur system, the chain is moved from gear to gear which can result in it running at an angle reducing its working life.

In the Trivelox design the gear cartridge is moved instead maintaining the chain in a straight line.  The disadvantage is the width required, meaning the width of the rear hub is also increased.  Because of this, Trivelox systems were generally 3 speed as any more width was difficult to accommodate.  Several years ago, a Sandem cycle sidecar body was collected.  The fabric covered body is in excellent condition and still carries its screens, hood cover and cushions. The donor recollected that it had originally been attached to a BSA tandem.  Very shortly afterwards we were offered a BSA tandem!

Although the two are unlikely to have met before, it is appropriate for us to combine the two donations.  Unfortunately, the chassis did not come with the Sandem but we have been able to purchase a Watsonian frame to use.  We also have a Watsonian sidecar body for a bicycle in the collection so this may also be fitted to a suitable machine in the future.  These family orientated machines remained in common use throughout the 1950s making them very suitable for the under construction 50s area at Beamish.

Restoration – A major challenge on the Excelsior tricycle restoration was the replacement of the spokes.  These are double butted, which means the ends of the spokes are enlarged at the ends.  The outer ends are rivetted over where they pass through the wheel rim and the inner ends are threaded to screw into the wheel hubs.  The hub holes were damaged so all had to be filled with new metal and then drilled and re-tapped using a special tap made in the workshops.  The gun metal hubs are quite soft so extreme caution needs to be exercised when tightening spokes to make the wheels true.

On Your Bicycle – an illustrated history of Cycling by James McGurn

The Sidecar: A History by Geoff Brazendale