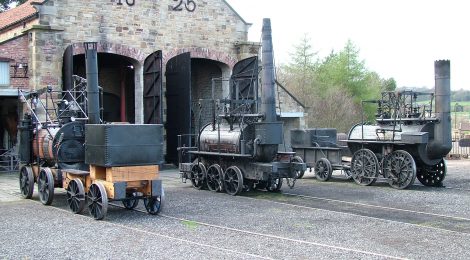 Beamish has a long association with the railway preservation phenomenon of ‘new builds’ – the term used to describe replicas or recreations of locomotives that no longer exist in any material form. The description had broad connotations, and there are any number of ‘original’ locomotives at work today that have very few components, if any, that originate from the working life of that locomotive – the Talyllyn Railway’s No.1 and No.2 are good examples of this, both having been substantially reconstructed since 1951, when they became heritage artefacts.

There is, in my view, absolutely nothing wrong with this, and recent informal discussion around what makes a locomotive authentic was an interesting exercise in considering whether the actual material, or the spirit of the design and working guise, is the more important factor in determining authenticity (rather than originality, which is material based).

There are many reasons for creating a new build. Often it is to recreate a lost class, motivated by nostalgia. Others have been built to understand a lost technology (as in the case of the Beamish trio) or recreate something that has a modern purpose (as is the case for Samson). The revived Hunslet Engine Company at Statfold sought to establish whether there was a market for new Quarry Hunslets, and having erected two, they still have a considerable number of parts in stock ready for any further orders to be fulfilled.

Looking back through the visiting engines gallery of this blog, it soon becomes clear just how many new builds there are and how many of these are either based at Beamish or have visited. I therefore thought that a saunter through these would be an interesting exercise and a good topic for a blog post…

It is perhaps not suprising that there have been a good number of narrow gauge locomotive new build projects completed, given the smaller nature of the project and the ability to hide such projects in garages and workshops across the land! Two of those listed here are arguably not new build, rather a continuation of their original builders range, albeit with something of a gap in production (in the case of Statfold and Jack Lane).

It is also harder to define new build in some narrow gauge contexts, for instance the Ffestiniog Railway’s continued production of locomotives needed for traffic – including the latter Earl of Merioneth (‘The Square’), Taliesin, Lyd and now James Spooner. They are new, but arguably again they are better defined as being constructed within the heritage era. We have also seen another Lynton & Barnstaple locomotive, Lyn, replicated (to an improved and enhanced design) and there are several other projects underway including two more L&B prairies, the North Wales Narrow Gauge Railway’s Gowrie single Fairlie and the Southwold Railway Trust’s ‘Southwold’, being built in Darlington for them.

These are a few of the projects underway or planned. Others include a new build recreation of the 1863 locomotive Mountaineer (the original was used on the Ffestiniog Railway), one of the Crewe Works Tramway 18″ gauge locomotives (Nipper – some of the parts are on display in Bury Transport Museum I believe).

We might, at this point, also consider what new builds we might see at Beamish in the future. There is a long-standing invitation to bring the replica of Catch Me Who Can (the original was built by Richard Trevithick in 1808) and which is nearing the end of its construction at the Severn Valley Railway, where its owning group, the Trevithick 200 Charity, are based. I would hope that we will see any future early railway new build projects operate at Beamish in the future – the Waggonway being the perfect setting for them. Certainly the project proposed by the Friends of Darlington Railway Museum to build a 21st Century version of Royal George is an interesting one.

There will probably always be a steady stream of new build narrow gauge locomotives. I would love to see the new Mountaineer project visit Beamish, this being a recreation of the Festiniog Railway (one F in the 1860s) 0-4-0T+T (the original was built in 1863 and was not rebuilt at the FR as the other George England-built locomotives were, but was withdrawn in 1879, some of its components being reused on the other locomotives).

We also have our own aspirations to recreate one of the two foot gauge Crewe Tractors (based on a Model T Ford) used in the First World War, for which the road vehicle element has already been created (and is in regular use, as blog readers will know). This will certainly be Beamish’s next new build, and probably the last for some time to come.

That makes quite a list – 13 in total to date. This must be something of a record for one location?!

NB: Apologies for the misalignment of the galleries – they look fine when I create them, then move to the right when I publish the post. Straightening them out is beyond my IT ability!

Some links to other websites may be of interest: