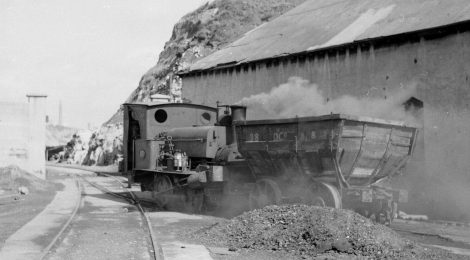 Regular readers of the blog will no doubt be aware that wherever possible, I try to obtain (by donation or purchase) images of the collections at the museum, taken during their working lives. Those same readers will also know that Seaham Harbour holds a particular fascination! The museum is custodian of the well-known Stephen Lewin 0-4-0ST No.18 as well as the older vertical boiler Head Wrightson 0-4-0VBT No.17 plus a collection of ex Londonderry (Seaham) chaldron waggons.

The collection also includes a counterbalanced coal drop and a stationary engine used on the quayside. I was therefore pleased that a collection of negatives, taken by George Marsh, appeared on an online auction site recently. They were grouped into threes, and whilst the museum hasn’t the funds at present to purchase them, I couldn’t let them pass so bid for them myself.

I was able to secure three of the four lots which I have included below, and would love to hear from the person who won the fourth lot, as this included a superb image of No.18 crossing the North Dock, between the two tunnels en route to or from the beach to the north of the harbour (which allowed access to the breakwater and also onto the shingle beach for the collection of material used in the manufacture of concrete blocks – these being used as part of the breakwater defences). In due course the negatives will be re-scanned and I’ll pass them to the archive to include in what is now a fairly substantial body of Seaham Harbour related material – much of which has featured on this blog over the years.