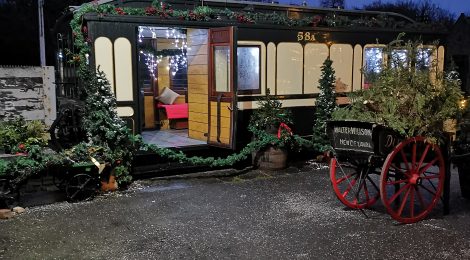 This will be the last general news post of 2020, with a review of the year to be posted next week. Depending on time, I may be able to publish an article or two for the Christmas period as well (subject to be confirmed – I’ll see what takes my fancy!).

There was a great response to the request for assistance with the transport stocklist, and in the end I drew names from a hat to give everyone a fair chance. I have contacted everyone who so kindly offered their services with this work and hopefully we will see the fruits of this little project in the new year.

Matt, Zoe and I spent a few hours engaged in the soemwhat energetic task of hand-shunting the Duke of Sutherland’s saloon into position in readiness to take up duty as Santa’s grotto from this coming weekend. As I mentioned in the last post, we cannot have indoor grottos, but Santa can be undercover if the setting is outdoor and the visitors are not undercover with him. This hugely limits our offer, but does at least mean that we can include a visit to see Santa for some visitors – tickets did sell out in four minutes for this weekend however!

Santa, through his own magic and mystery, will also continue to appear around the museum in the Armstrong Whitworth replica car at weekends and during the school holidays, this proving to be very popular last weekend. In addition to this, the WAV is out on-call, for visitors who require it.

The progress within the workshops is currently limited to inspection/repair of vehicles in operation over Christmas, including the AW car, WAV and period vans. The S&N ‘replica’ van appeared at the weekend with a broken spring. This vehicle does a high-mileage in the service of the period food team, but is also notorious for being ‘well-used’ and so the broken spring was an unwelcome occurrence at a time we have only one member of staff working two-days per week. Owens Springs were contacted for a replacement, with the decision being taken to replace both springs and place the old, unbroken, spring into stock as a spare.

The maintenance team worked wonders in preparing the site for reopening post-lockdown 2, with Christmas decorations and lighting attached to buildings and trees (themselves harvested from around the museum premises by the garden team) in the usual arrangement. I haven’t any photos of them at work, but here are a couple showing the installations of lighting and stalls halfway through the process. The Town staff carried out the low-level decorating and also turned the show windows around, to reflect the season, in a remarkably quick time. Since then, a new food kiosk has been installed at the Fairground and the lighting and decoration of the grotto at Rowley Station has been completed. With tickets for weekend days booking up quickly, we anticipate being busy – this is very gratifying given the restrictions imposed upon us and therefore the forbearance required of visitors, but also the rather lacklustre weather!

Photo of the week

For this week’s photo we look back to April 7 – 10 2016, the weekend the Great North Steam Fair became the Great War Steam Fair, to reflect the theme we had established for including First World War equipment in the event lineup. This extended from the railways to the roads, with a sizeable number of First World War road vehicles attending, alongside a collection of internal combustion locomotives, waggons (plus one steam locomotive) on the narrow gauge railway. The image below, by Eric Garrod, is a firm favourite and shows one of the evening photo sessions created using as many of the centenary-old vehicles as we could muster. These then cavalcaded around the site, giving opportunities for photographers to capture a convoy of road transport from that era.

The event also included many other veteran vehicles, as well as the ever-popular working display of sawbench and traction engine (complete with suitably uniformed prisoners of war). It is certainly one of our most memorable events in recent years.