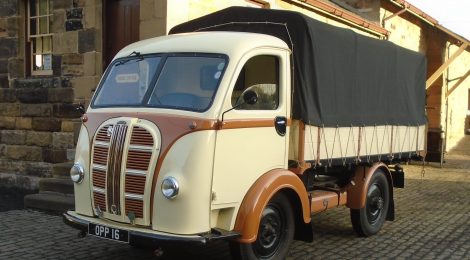 Below: No.18 has been relocated to Rowley Station in order to carry out the shunting associated with Christmas (grottos once again being assembled in the station goods yard buildings).  It will remain at Rowley, being used in the new year to reverse the shunt, before being prepared for long-term storage out of use.  It is seen here propelling the Tranship Van into the RMS, having placed the Duke of Sutherland’s saloon into the goods shed (to act as a grotto). 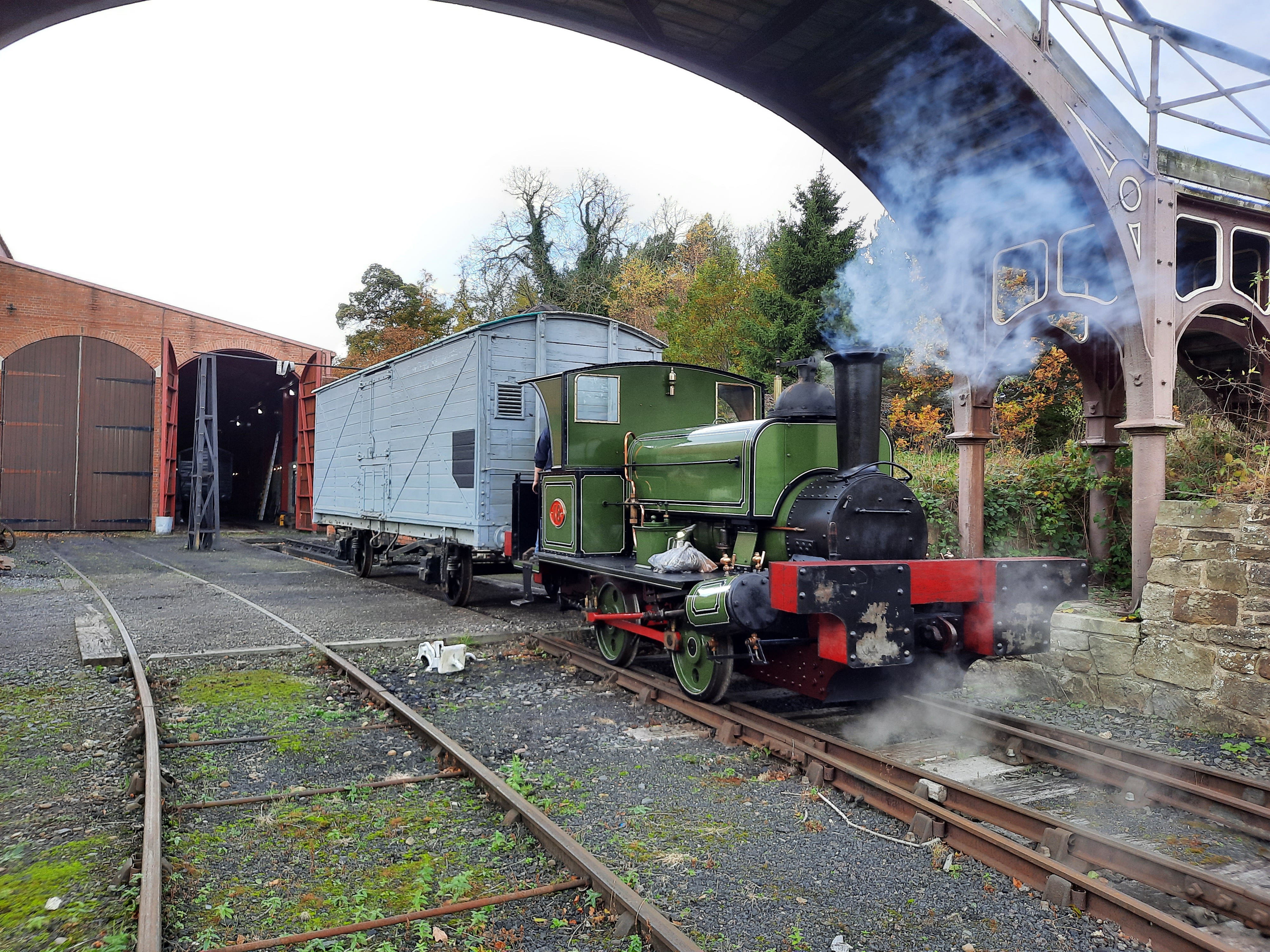 Below: The museum has been the fortunate recipient of a very nice donation of two restored commercial vehicles suitable for use on site and around the 1950s developments in particular.  The first of these is Austin K8 dropside lorry OPP 16.  The Austin is seen here heading to the RMS where it will initially be stored.  The Morris Commercial (an earlier donation, and a vehicle that is in daily use around the museum site) is seen in the background. 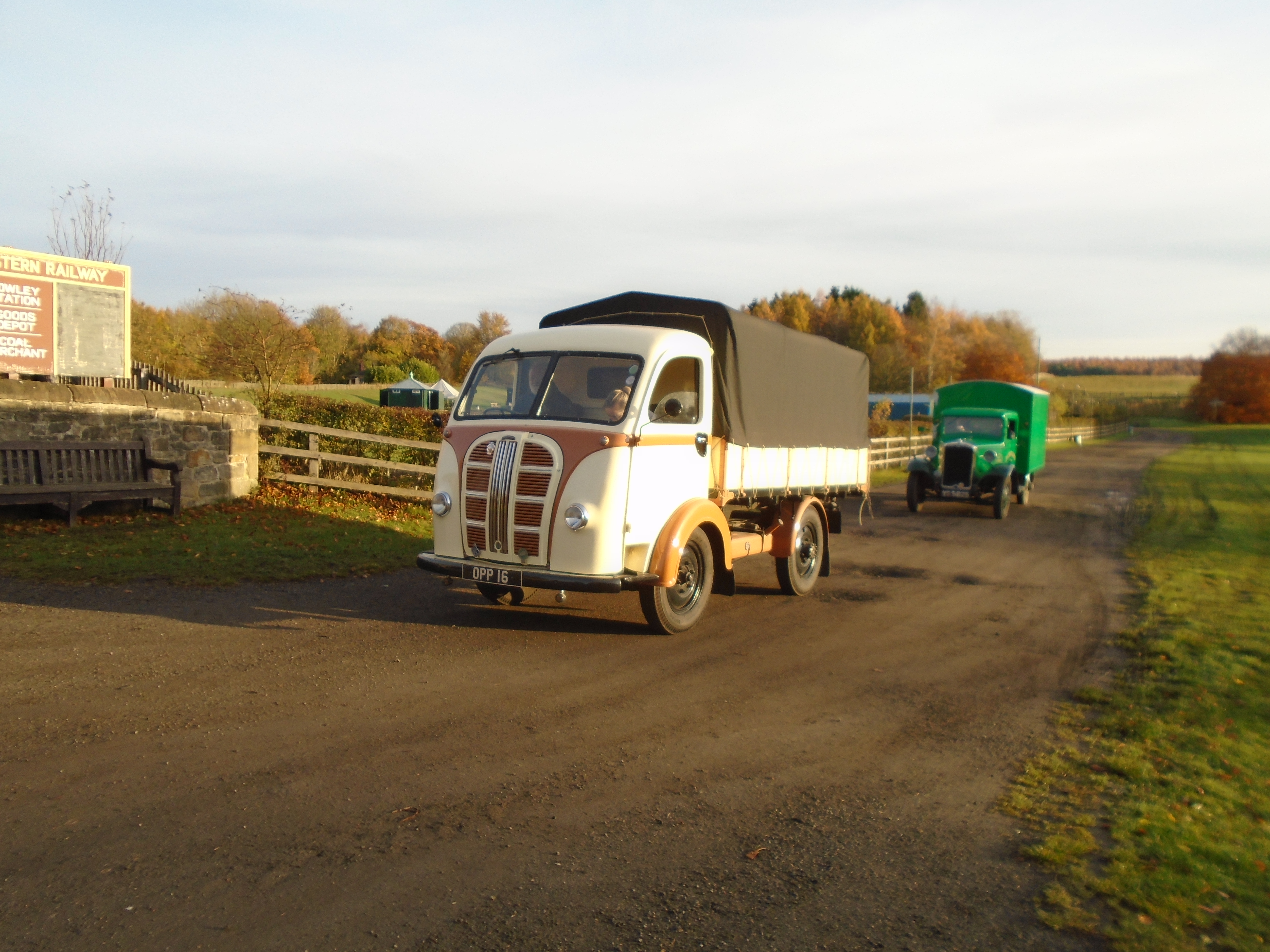 Below: The K8 dropside is a rare survivor.  It was first registered in 1951 in Buckinghamshire, to Ralph Eames of Bletchley.  He was a greengrocer and used the Austin to collect produce from the old Covent Garden market in London.  The short length and manoeuvrability was considered an asset when carrying out such work in the busy confines of central London.  The K8 was later stored in a field, before being sent for breaking in the mid-1980s.  It was later rescued for restoration and passed through the hands of a number of owners before passing into the ownership of our donor, who carried out an extensive restoration, this being completed in the autumn of 2014.  For now, we will operate the K8 as part of the special collections, as it is simply too nice to put into general use.  The covered back will be a particular advantage for setting up events and mobilising some of our transport-related equipment.

The Austin is fitted with a 2199cc OHV petrol engine (the same as was fitted to the Austin 16 car), and has a payload capacity of 25cwt.  The driving position was noteworthy for its excellent visibility and the type was probably better known for its use as a basis for commercial vans and ambulances.

The full story of the restoration can be found in the October 2015 issue of Classic Vintage Commercials. 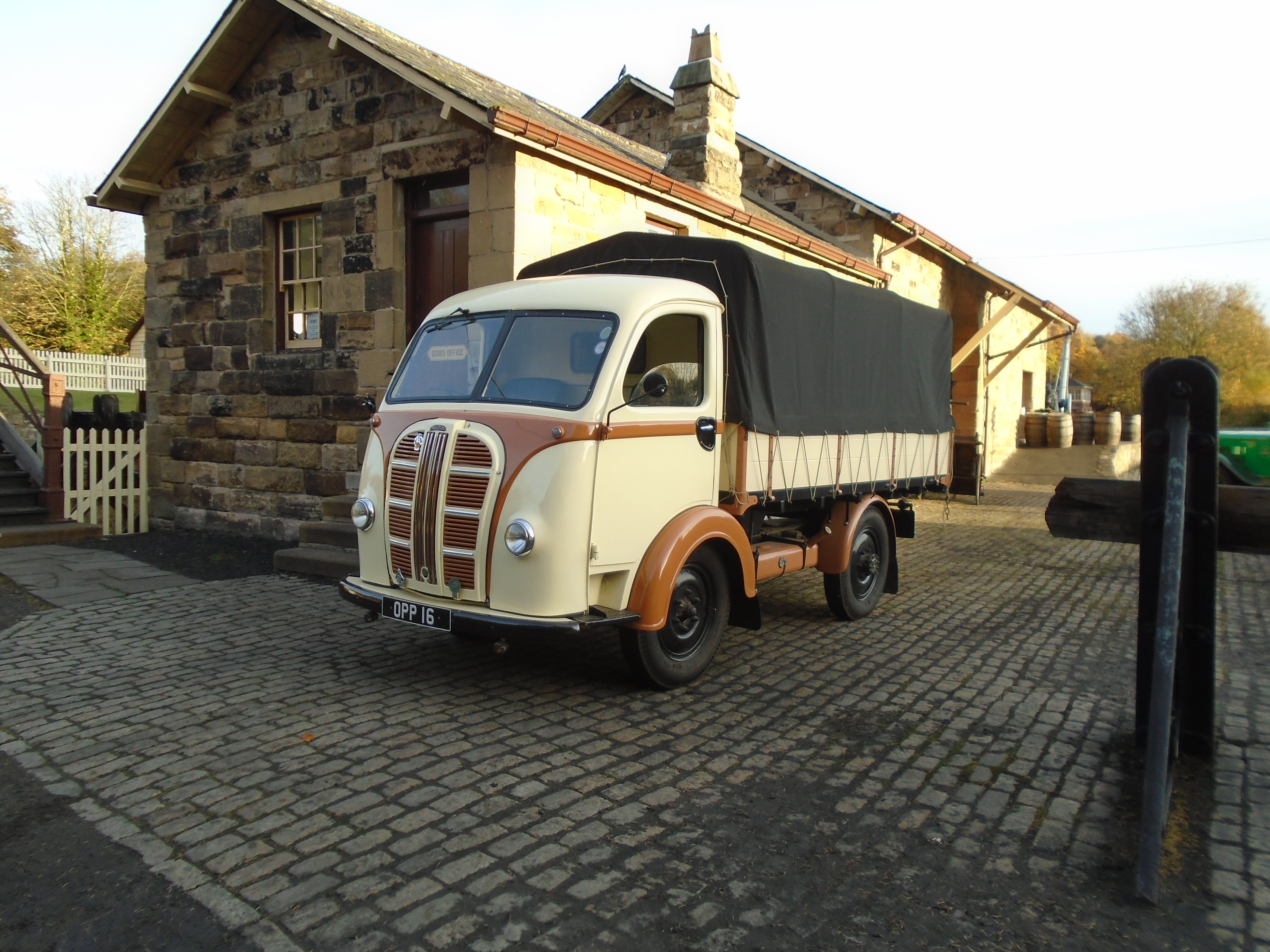 Below:  The second vehicle is an Albion Chieftain, JTC 893, which has also been restored to operating condition.  Both vehicles came with a large number of spares and we will be sorting through these as well as looking at the commissioning of the two commercials in due course.  We are very grateful to the donor for considering us as a suitable museum for the future of these two vehicles.  It is also a reminder to me to progress the revised transport collection stocklist, that has been a work in progress for some time now and which will usefully record many of the changes and additions to this collection for those seeking information on on the museum’s transport artefacts. 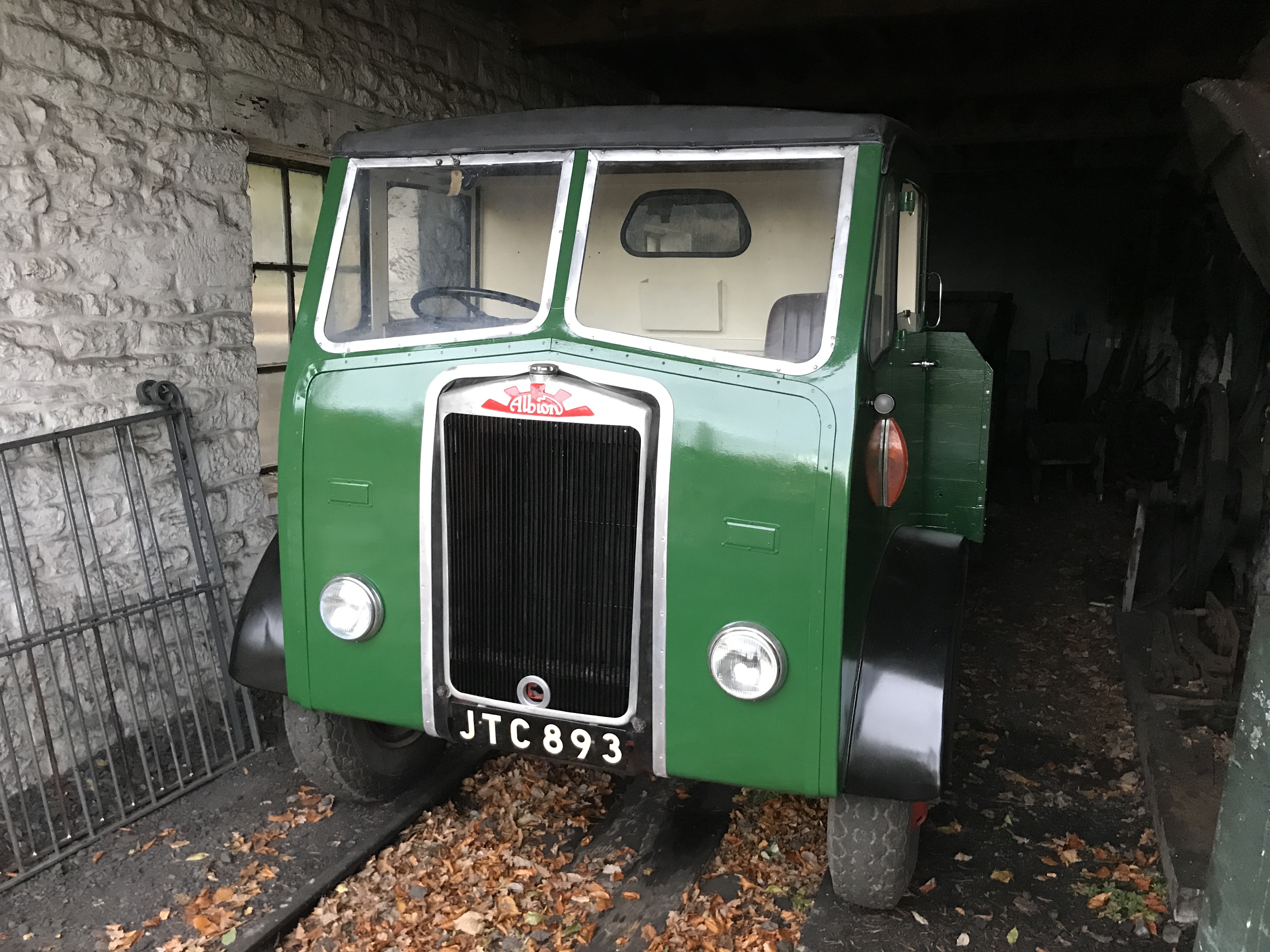 Below: In the machine shop, the stripping of Kerr Stuart 721 continues, with the valve gear and motion stripped from the (still) rolling frames.  The significant wear to the tyre profile is clearly evident here! 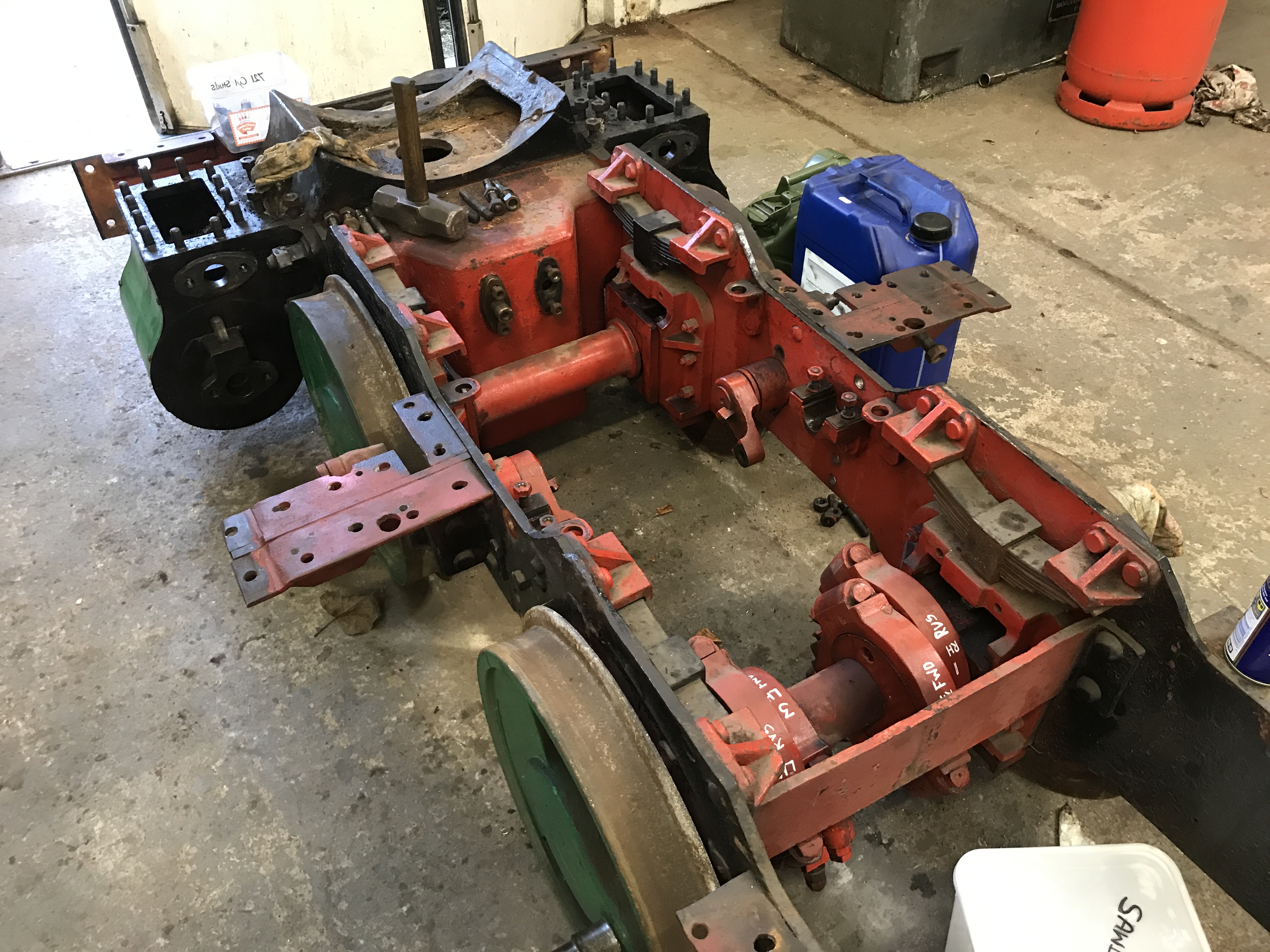 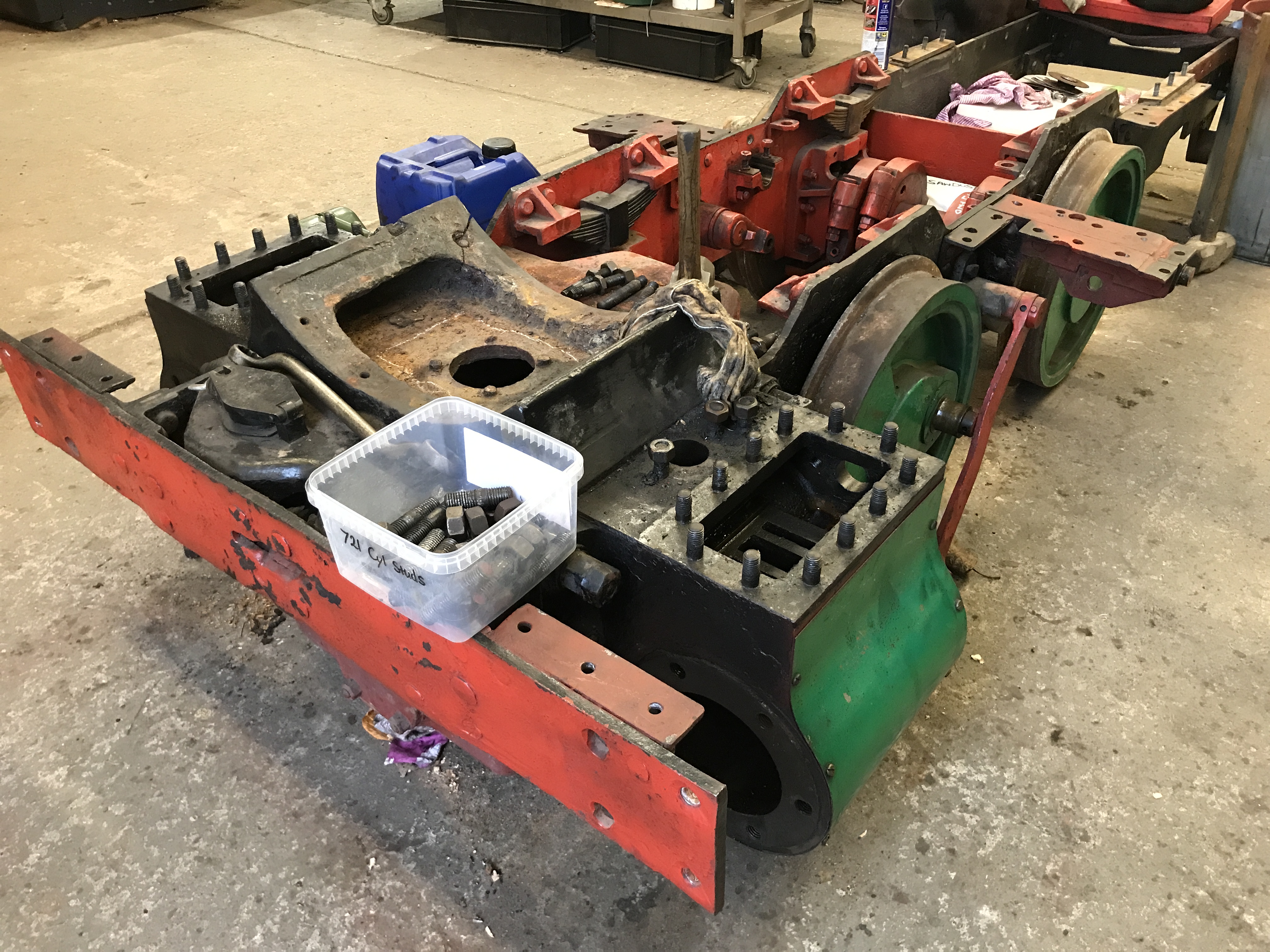 Below: In the bus depot workshop, a number of routine jobs are underway.  One of these is the preparation for MoT of the Nissan Navara, used on the construction site (and which is beginning to show its age!). 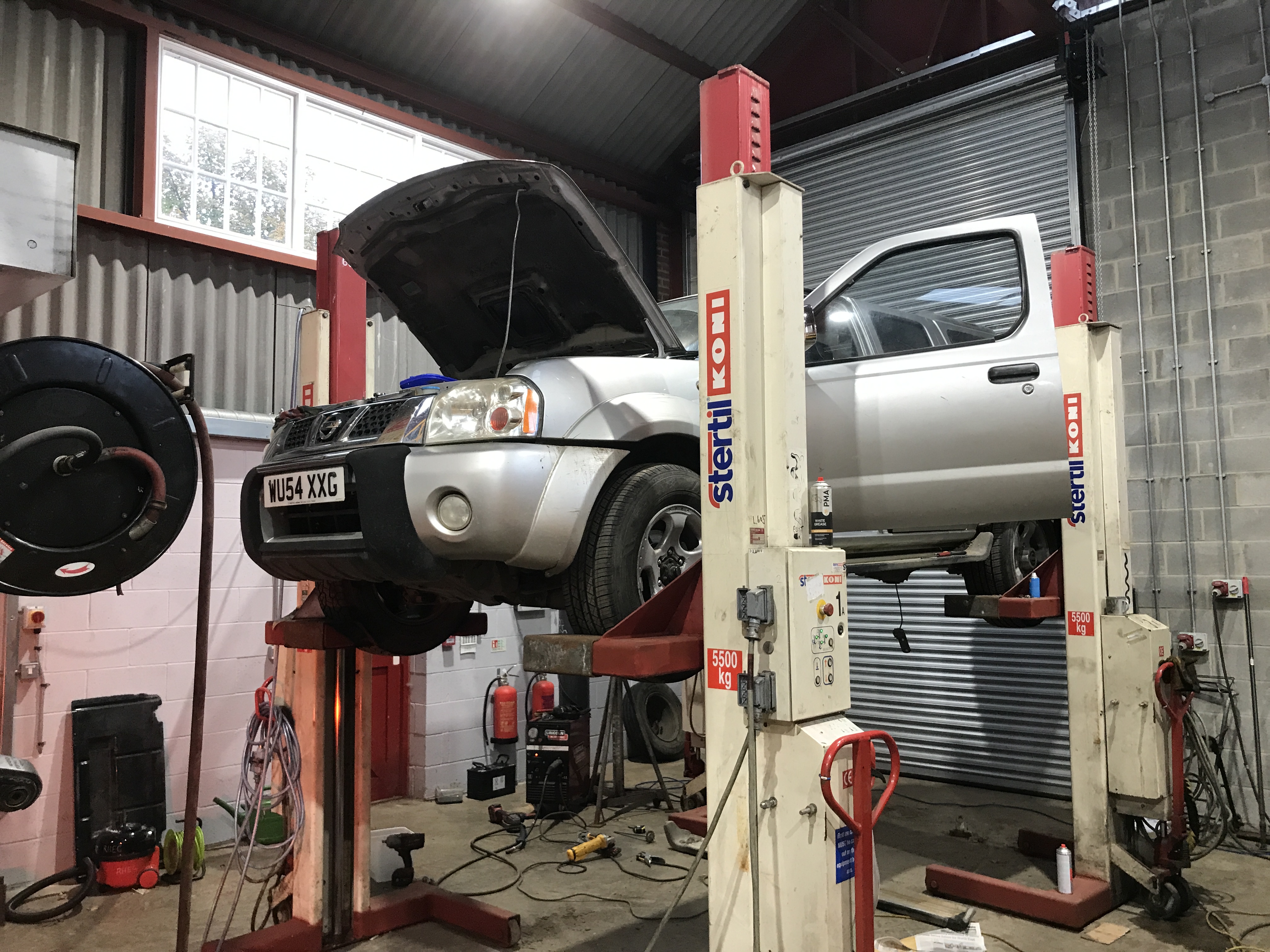 Below: The second vehicle in the workshop is J2007, which is receiving some attention ot the electrics, as well as its routine inspection. 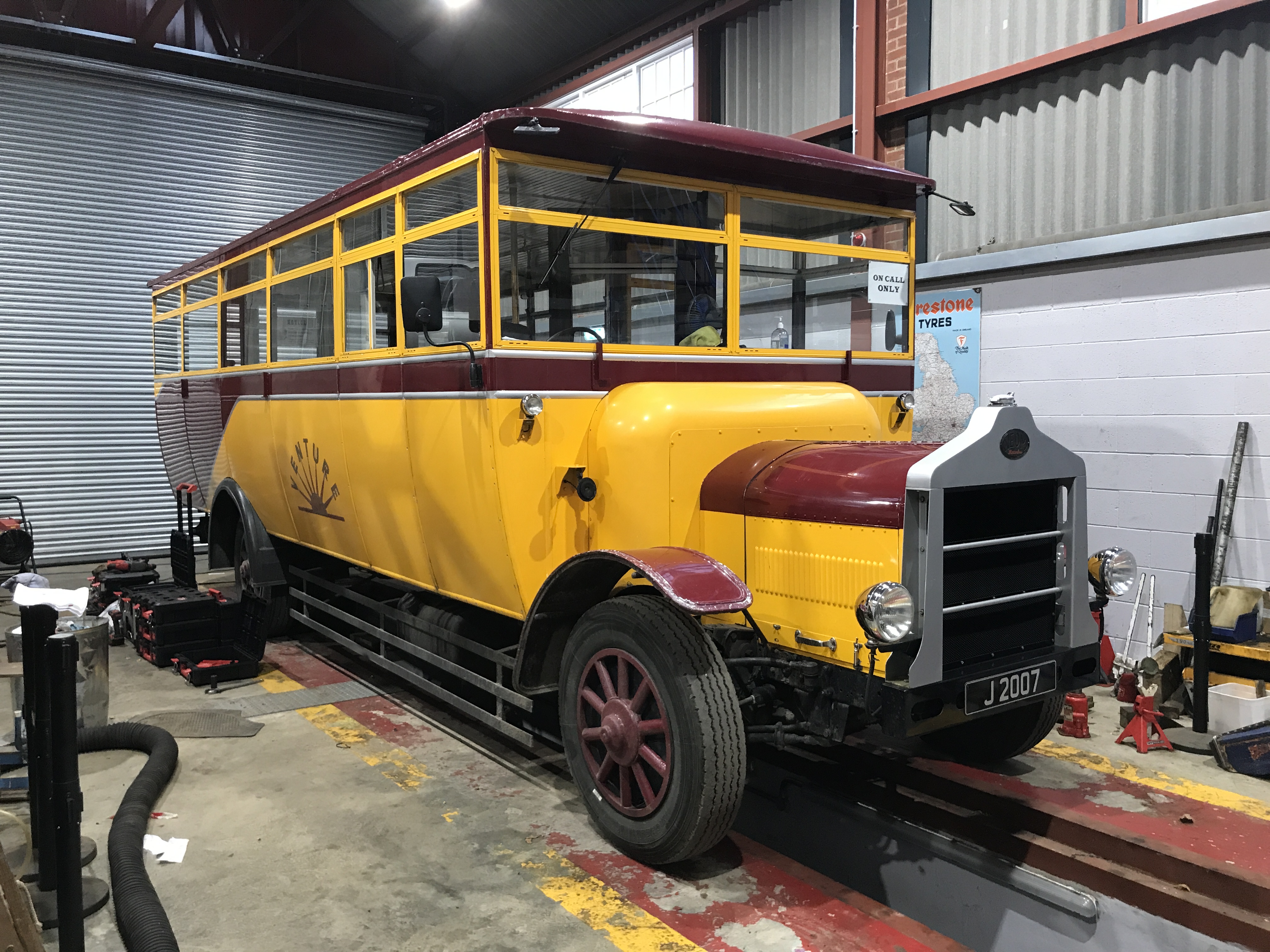 Below: The Armstrong Whitworth replica car has moved to the depot, sans roof, in readiness to operate as Santa’s internal combustion sleigh during the Christmas season (which commences on the 27th November).  I always prefer its appearance as an open limousine, but this clearly brings challenges when operating during the winter! 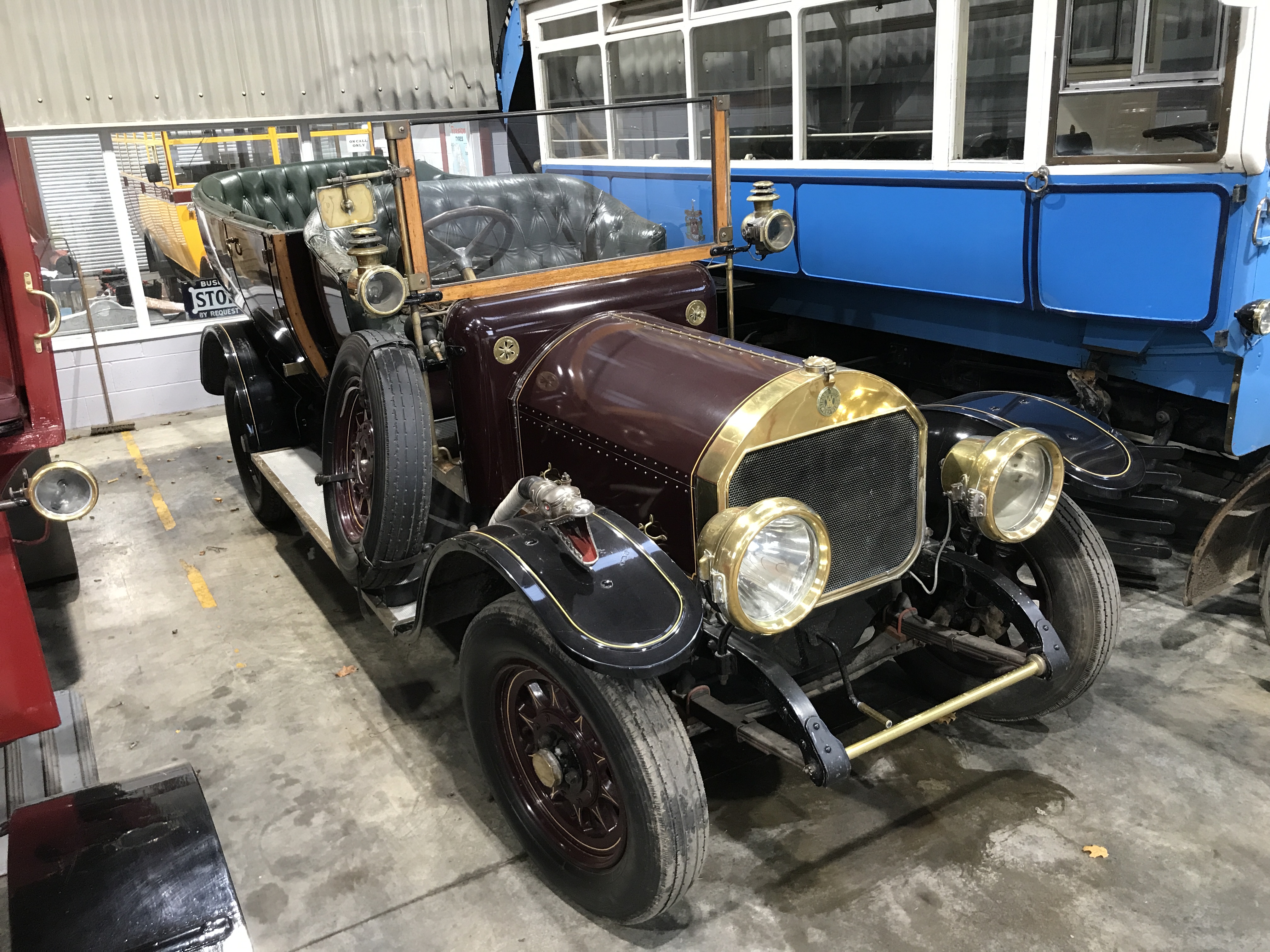 Below: Something I haven’t featured before, but which may be of interest, is the bus availability board, recently installed in the depot.  This shows vehicles, their inspection dates and an at-a-glance indicator of whether they are available for duty.  Space has been left to add further vehicles in the future – the Dodge bus and SOS being likely candidates to occupy these. 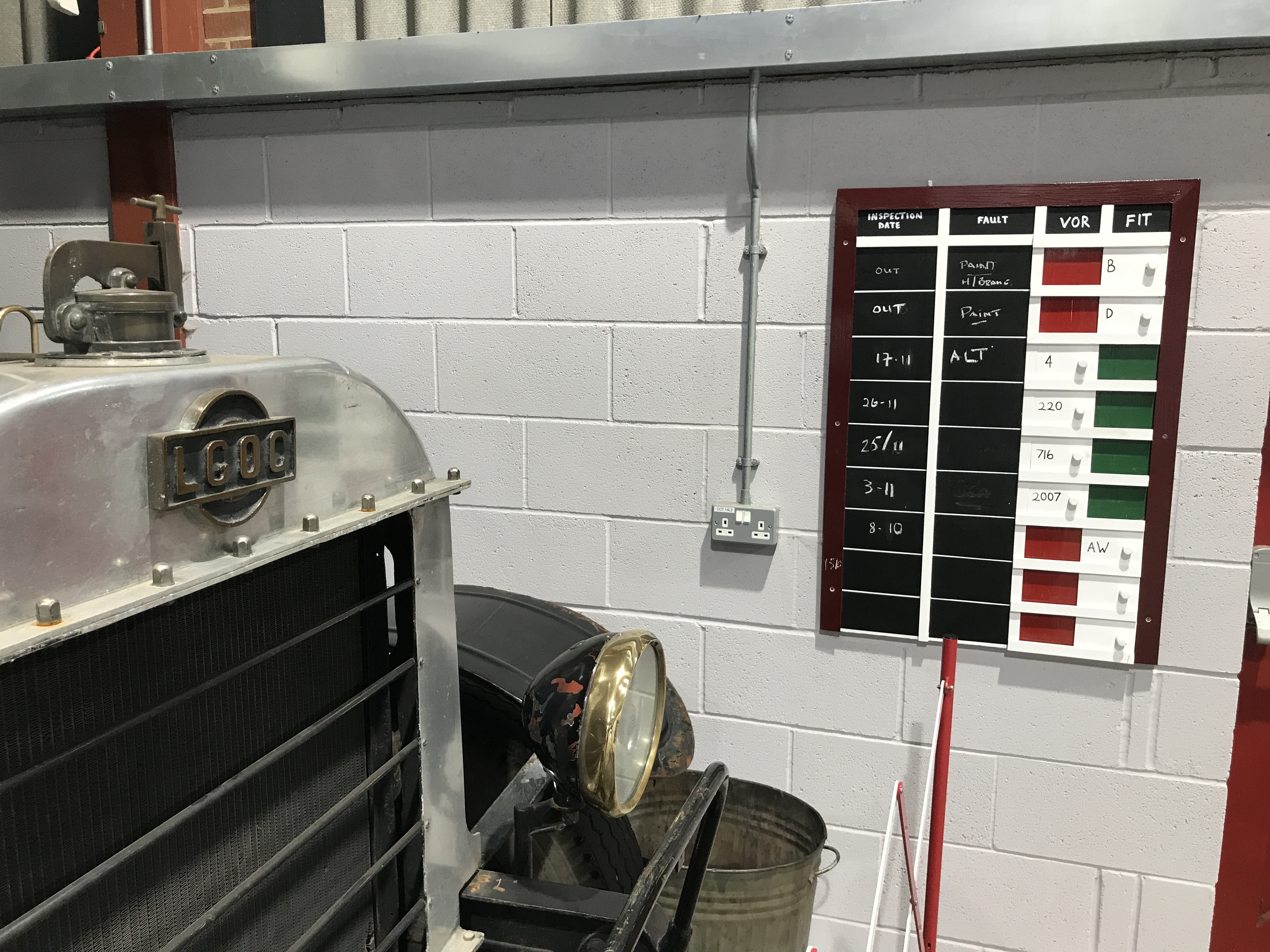 There is likely to be a short break for the blog, but it will return in three or four weeks, with a lot of news, no doubt, to report by then…