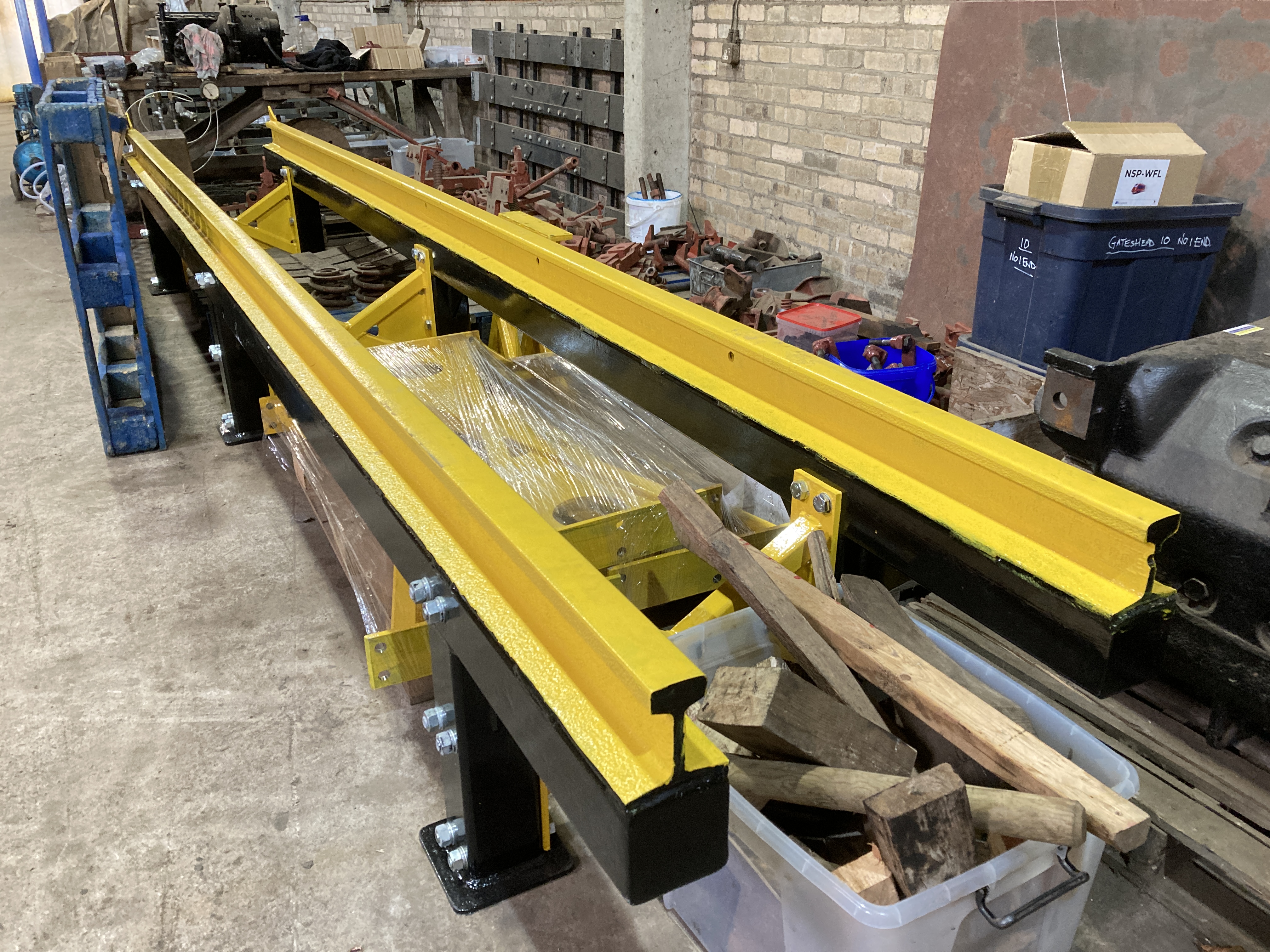 Here is a short update this week, to keep news posts ticking along…

Below: The two portable ‘pits have arrived from North Bay Railway Engineering Services in Darlington.  These can be gauged to either two-foot or standard gauge to suite the work being carried out and enable a much more comfortable working height for staff as well as access beneath the subject receiving attention.  They can be moved, and loaded, using our new gantry cranes.

Below: The lighter weight short-beams, seen here set to standard gauge, will suit narrow gauge subjects, and initially will be used under Kerr Stuart 721. 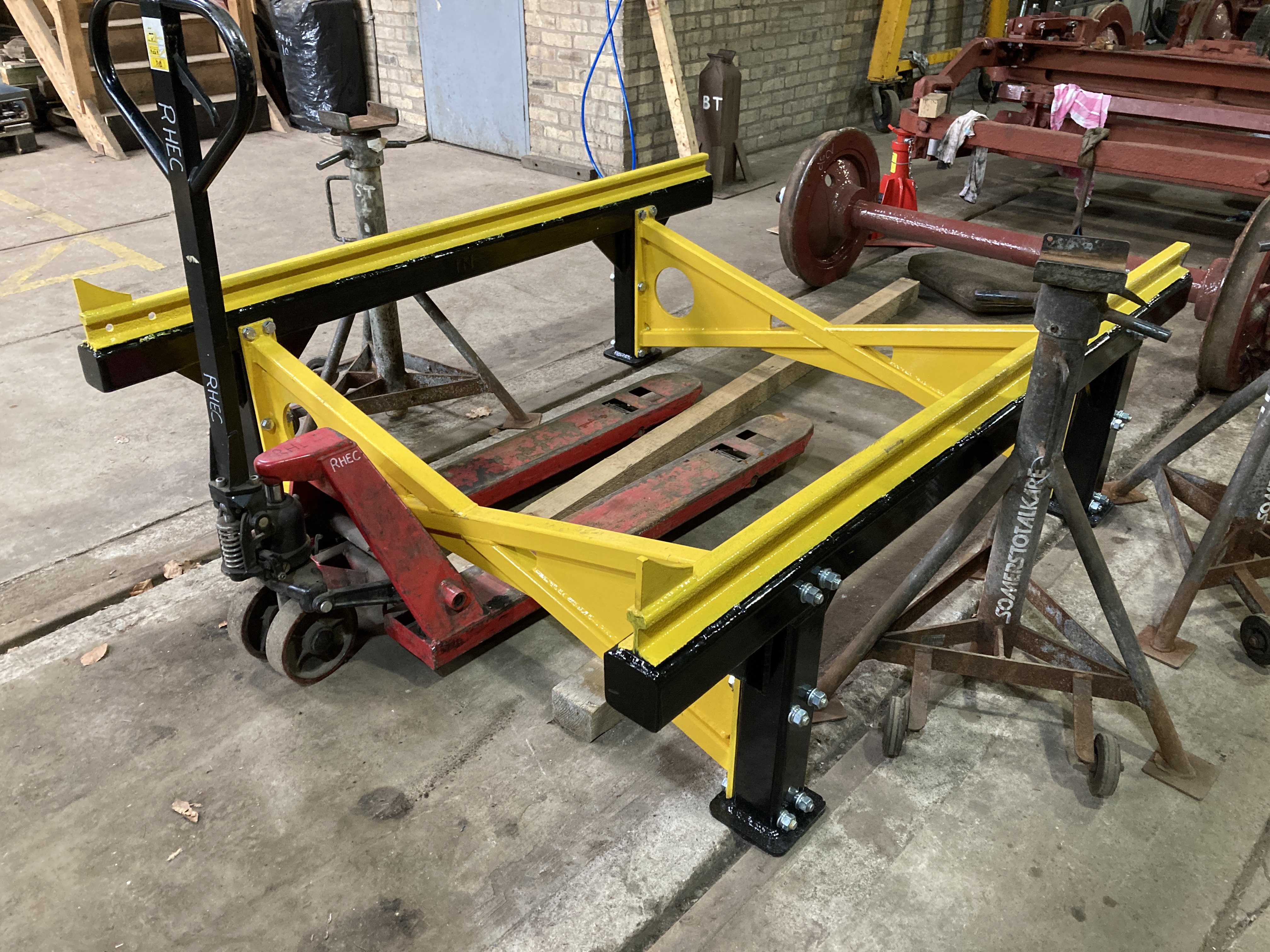 Below: The longer standard gauge beams are seen here, set to narrow gauge for movement.  They will be used for Gateshead 10’s bogies shortly.  For flexibility, cross-members of both gauges can be fitted to both sets of beams simultaneously (see second photo). 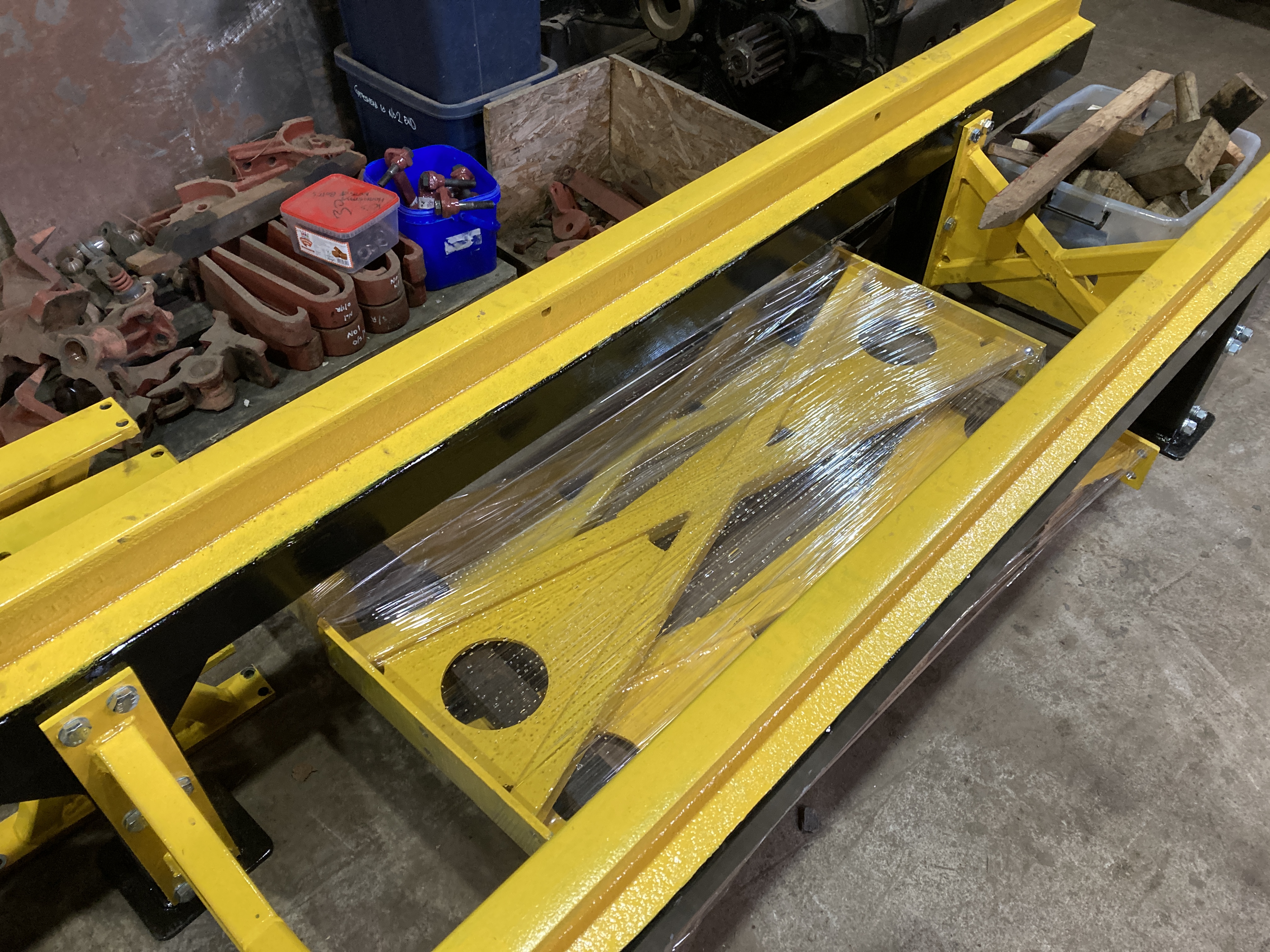 There are various other improvements underway within the engineering department, including a new partition wall to reduce draughts (and prevent the area used for lifting being used as a thoroughfare).

Below: Down at NBRES’ workshop in Darlington, the vehicle we know as the S&N van (a Fleur de lis creation, and now very much dated) is receiving cosmetic improvements to the bonnet.  As readers will recall, it is no longer really a vehicle, rather, a van-shaped catering outlet!  All means of it propelling itself has been removed and it will form part of the catering/food outlet offer on site.  The horrible louvres below the windscreen are also going to be improved, to create a rather more sympathetic look.  Whilst it is clearly not a Leyland, it is is hoped that these improvements will make the thing rather less jarring when out in use, in the museum.  The radiator is an accurate replica, though I may remove the Leyland badge to remove any confusion about what it is. 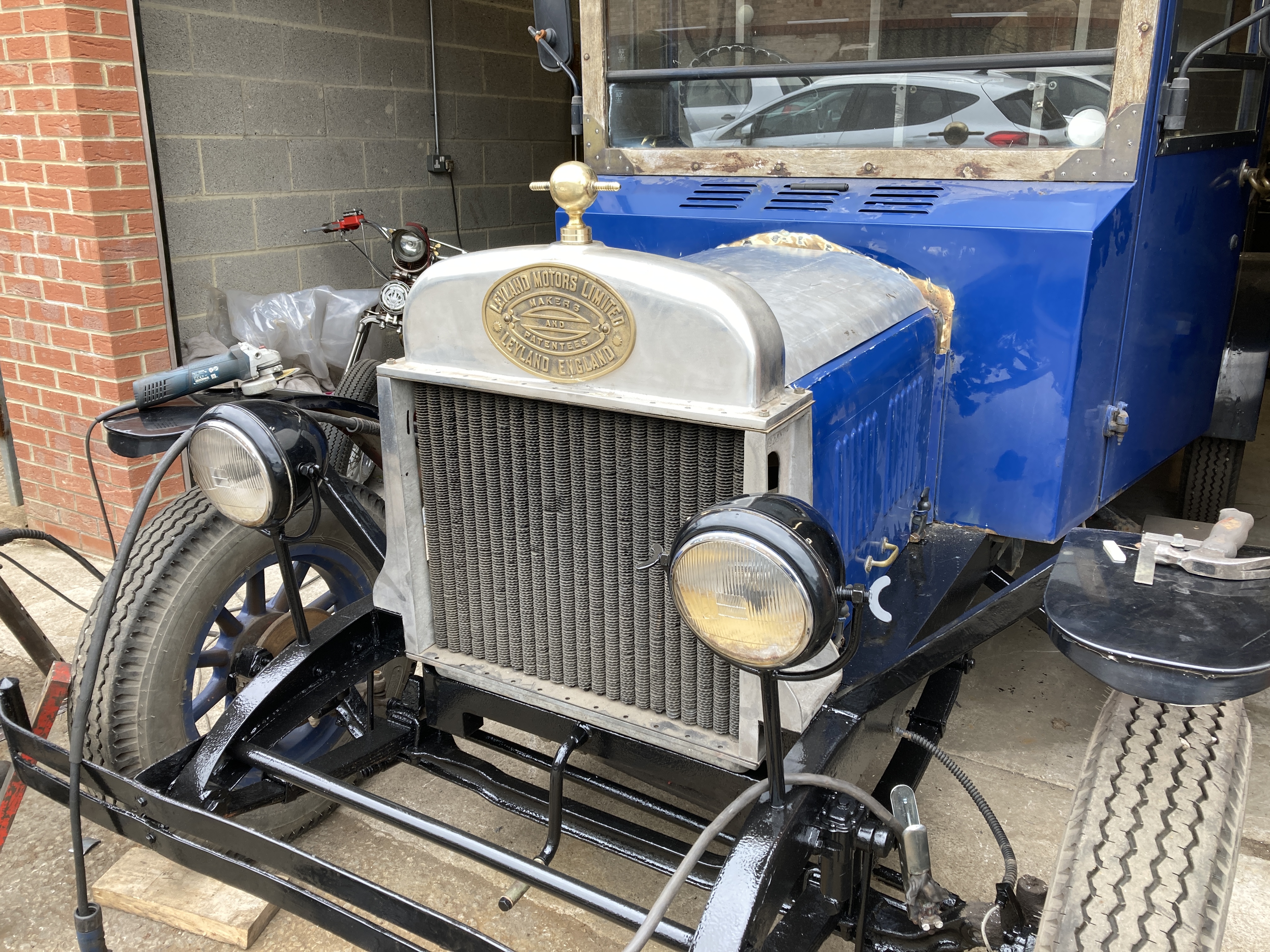 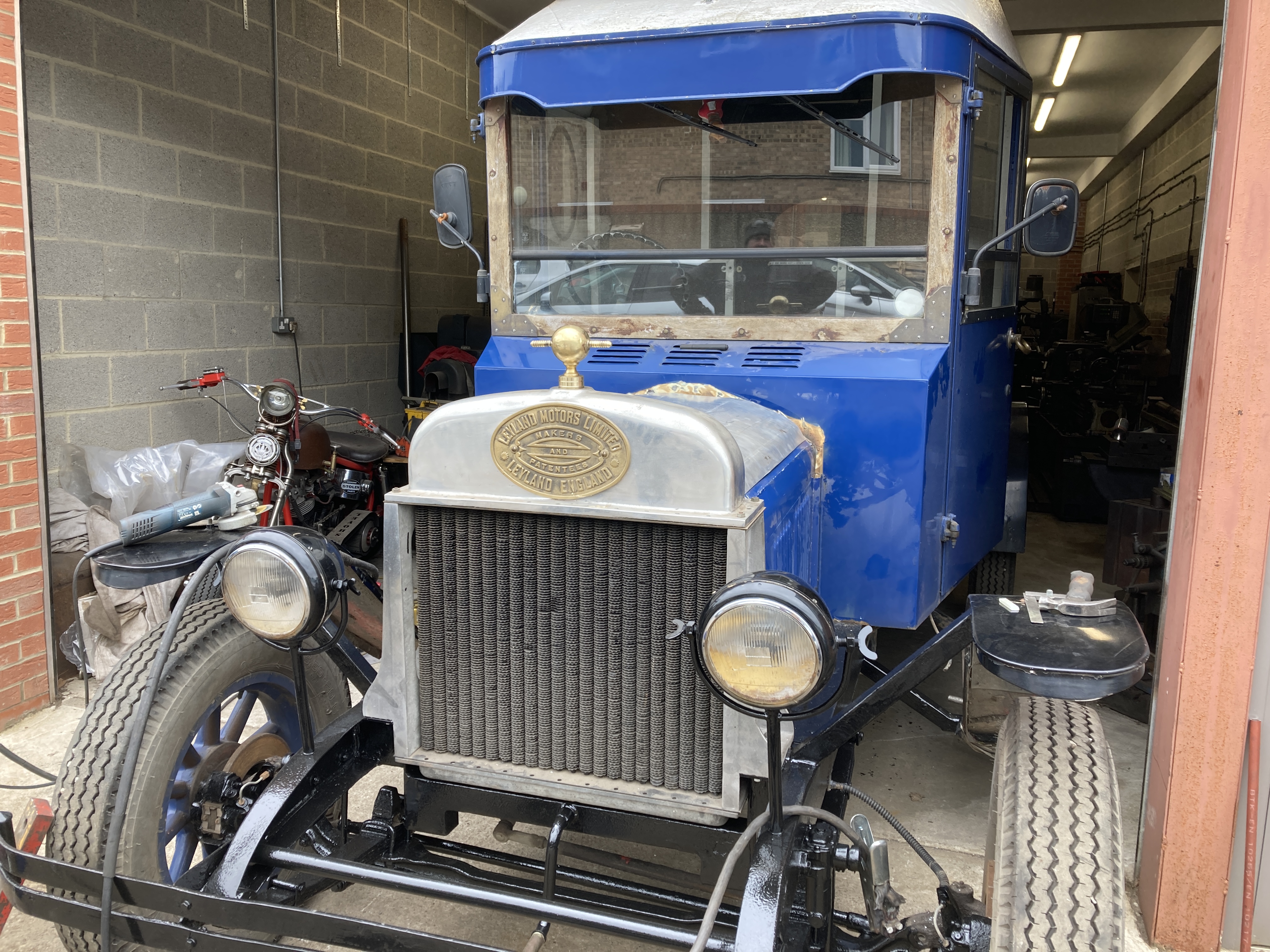 Below: From one slightly uncomfortable ‘replica’ to another…  WAV J2007 has had it’s structural work completed and the interior reinstated.  It is seen in the workshop last week, undergoing examination in order to put it into service over the busy Bank Holiday weekend.  Crosville 716 will then be pulled in for inspection and some adjustment to its steering mechanism. 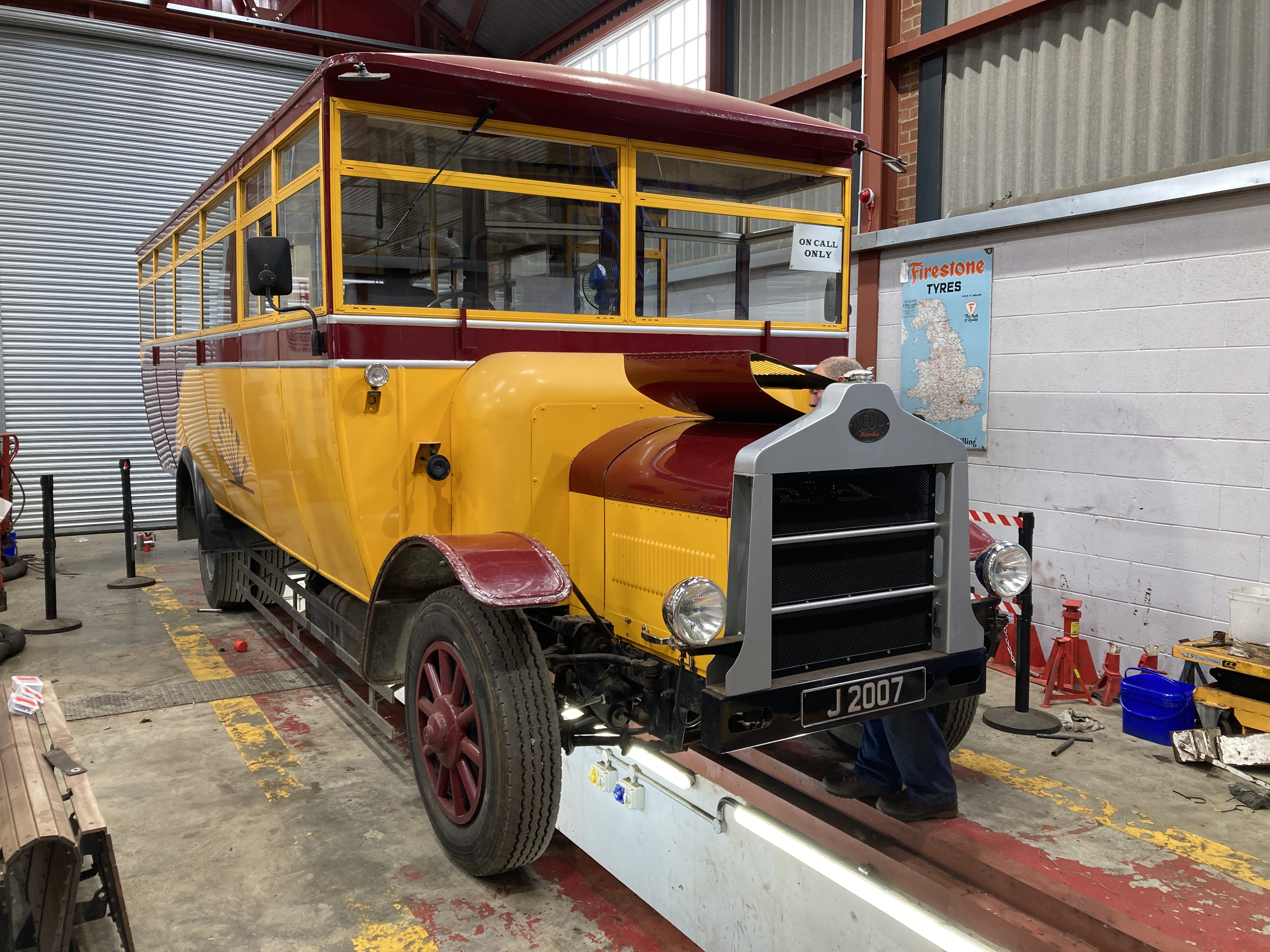 A photograph came to light last week showing the roof of the shelter, whilst in situ in Cockerton, far more clearly than we’ve seen before – and revealing that there was roof ridge cresting fitted.  I’m now looking for either suitable salvaged cast cresting, or a means of reproducing something suitable for the shelter in order to add further to the quality of the restoration.  More on this in due course…