This week has certainly been a warm one!  Looking at some of the track on site, we’ve had a fair bit of distortion in the heat, as indicated by gaps at sleeper ends.  As we aren’t running most of the railways, this hasn’t required attention, but has been noted for future observation and reinstatement of ballast shoulders etc.  We are still looking at the tramway with a view to opening later this year.  The key area needing attention is the track, with a backlog of work from 2019 to be tackled.

It may be that we open the tramway in sections, though operationally this is not particularly desirable and a full-circle would be the easiest to manage.  If we do open a horseshoe route, say from Foulbridge to Town East, then we may not run the circular tours as planned, but instead a pared down service.  We also know from visitor feedback that they are relieved at the ongoing social distancing and face mask wearing measures in place, and so we have actually reinstated the distancing on the buses. We will review this throughout the summer holidays, with a view to finalising our autumn operational format in time for September.  Recent experience has taught me that whatever plan we make, it is unlikely to be implemented without at least some change!

This weekend has also seen Crosville 716 enter service, and I’ve included some views of this here too.

Below: Whilst other work has taken precedence over Kerr Stuart 721’s overhaul, some small jobs have been progressing.  Dave Young has overhauled the axlebox lubricating oil-pots, including manufacture of two new lids with knurled edges. 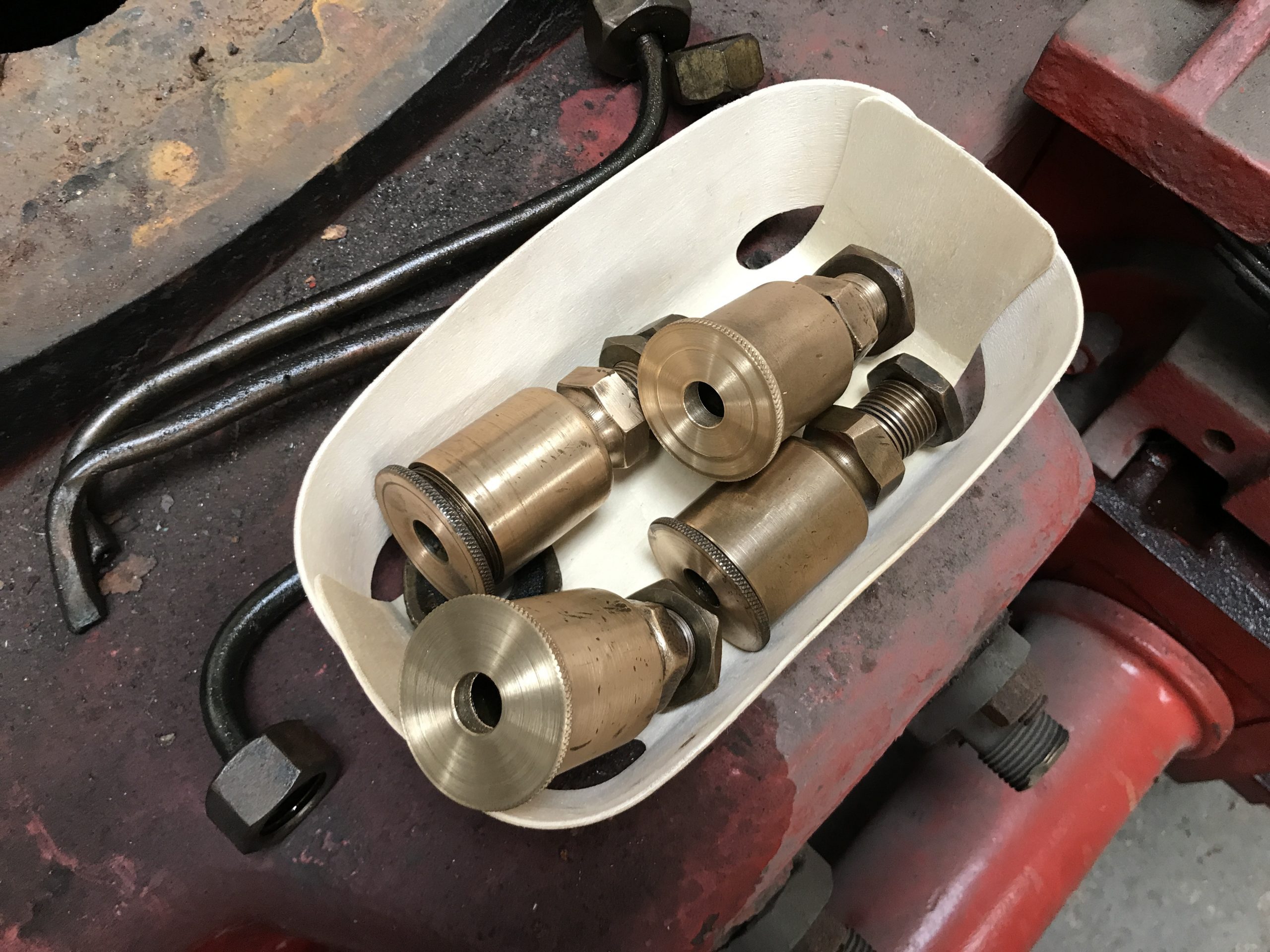 Below: One of the lubricating pots is seen here adjacent to its location on the frames – seen just above it.  Next week should see the arrival of the sandboxes (which haven’t been attached to the loco since it was cosmetically restored) and we can then assess the level of work needed on these plus what is required to replicate any missing components.  I am also hopeful that some original paintwork remains for future colour-matching purposes. 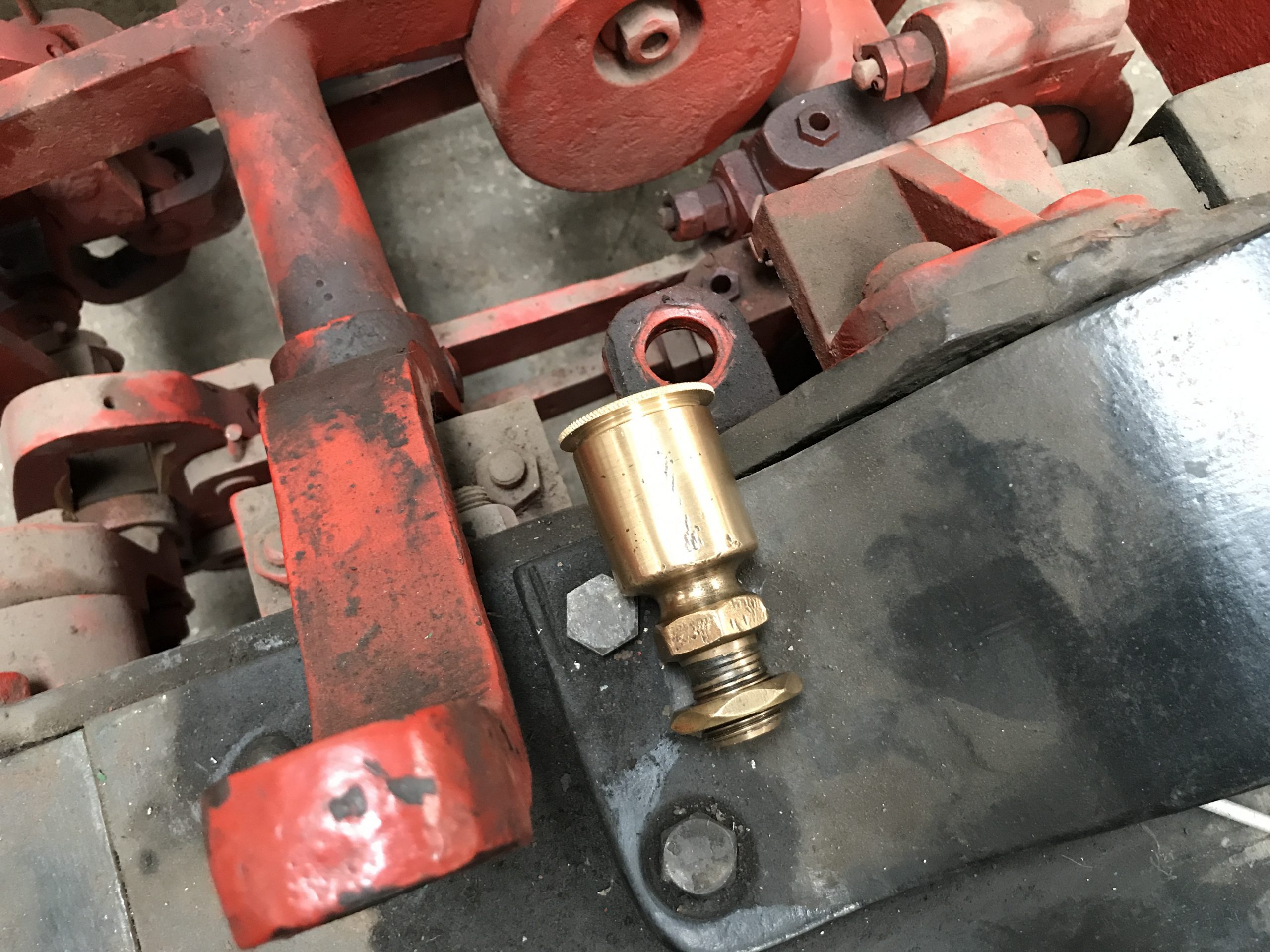 Below: Chris and Dan have begun to machine the components of the Fordson N radiator tank.  Here is the drawing that they have produced, showing the locations of the mounting holes. Their first job is to face the mating surface, for which the casting is mounted on the milling machine.  They can also use the digital read-out to locate all of the holes that need to be drilled. 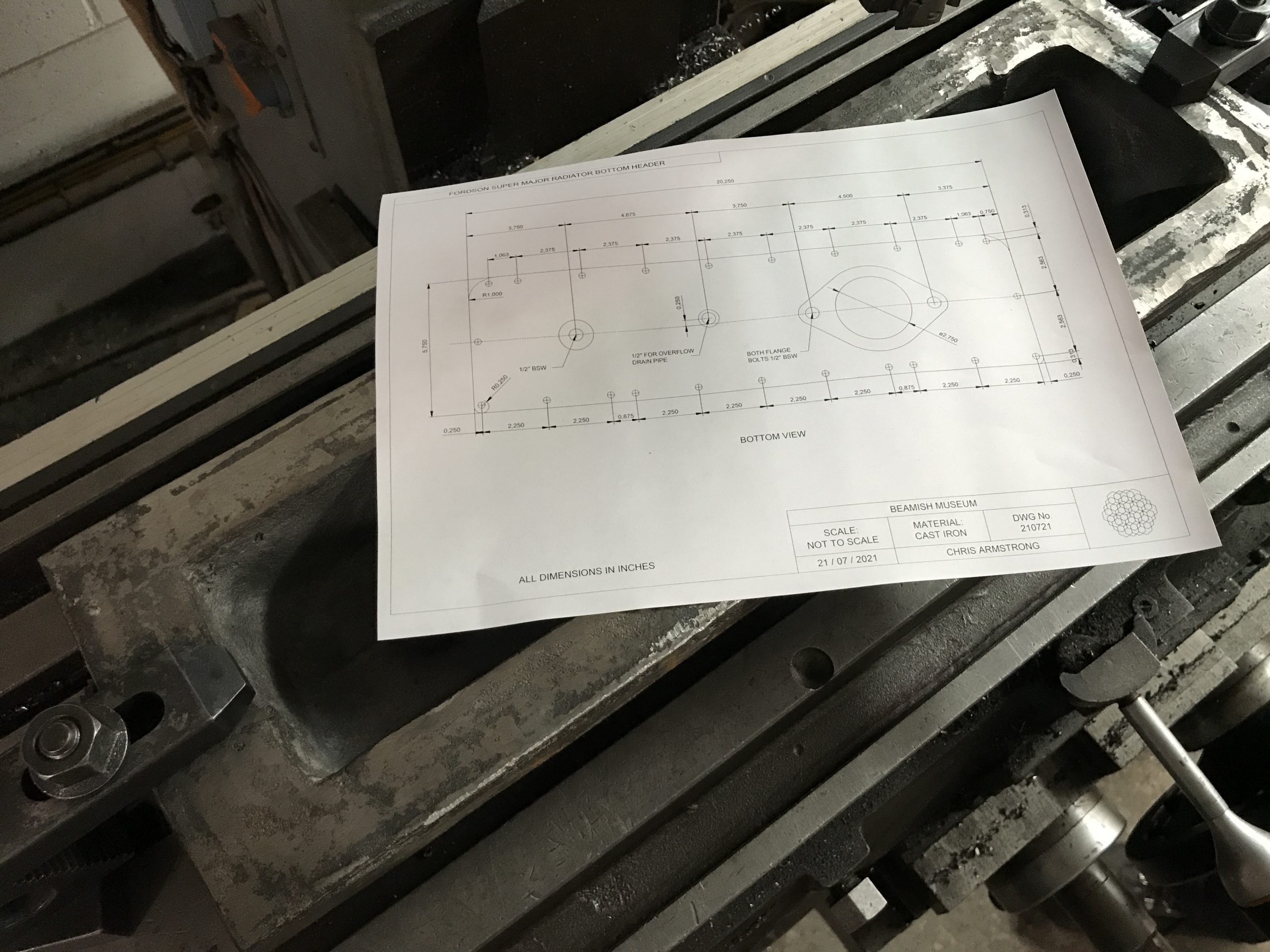 Below: Rebecca has been making good progress on the repaint of the Waggonway coach.  It has now been moved to the Waggonway, where painting will be completed in the next few days, so that it can re-enter service next week.  It will also have a new fitness to run exam as part of its preparation for use. 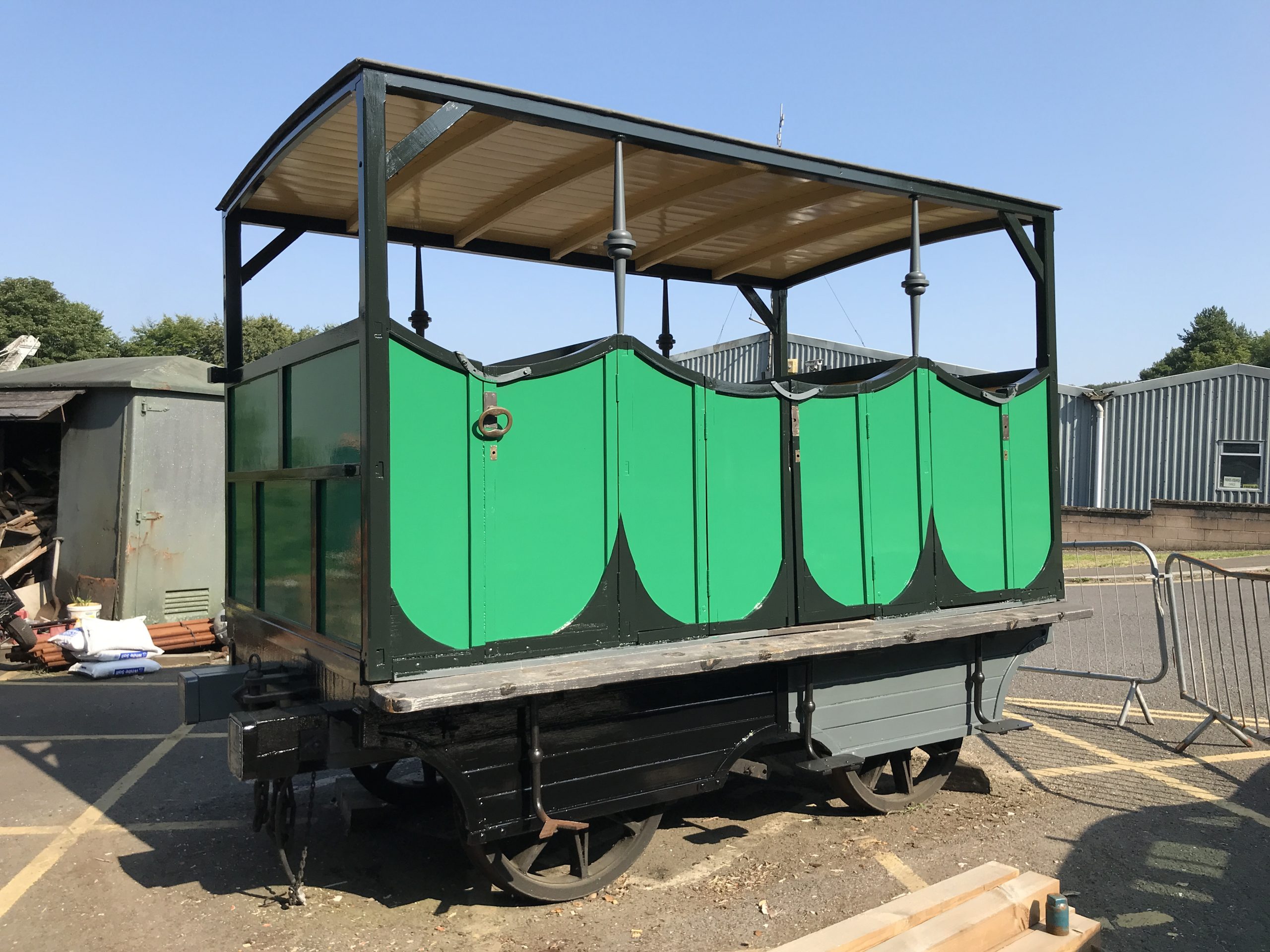 Below: I haven’t talked much for some time about the trolleybus route development.  A substantial amount of design work has been undertaken on the infrastructure, whilst the construction design team are currently reviewing some of the road layouts.  Discontinuity of those involved had created some pinch points, over the original spec, so these are being reviewed – very usefully data is available from a 1953 planners handbook – from which the extracts below are taken.  These have been converted to allow overlaid swept paths for six-wheel buses at the junctions around the 1950s town.  The design aim is to keep the bell-mouths of the street entrances to a minimum (to reduce the length of crossing for visitors on foot) whilst still enabling the buses to negotiate the junctions from any direction. 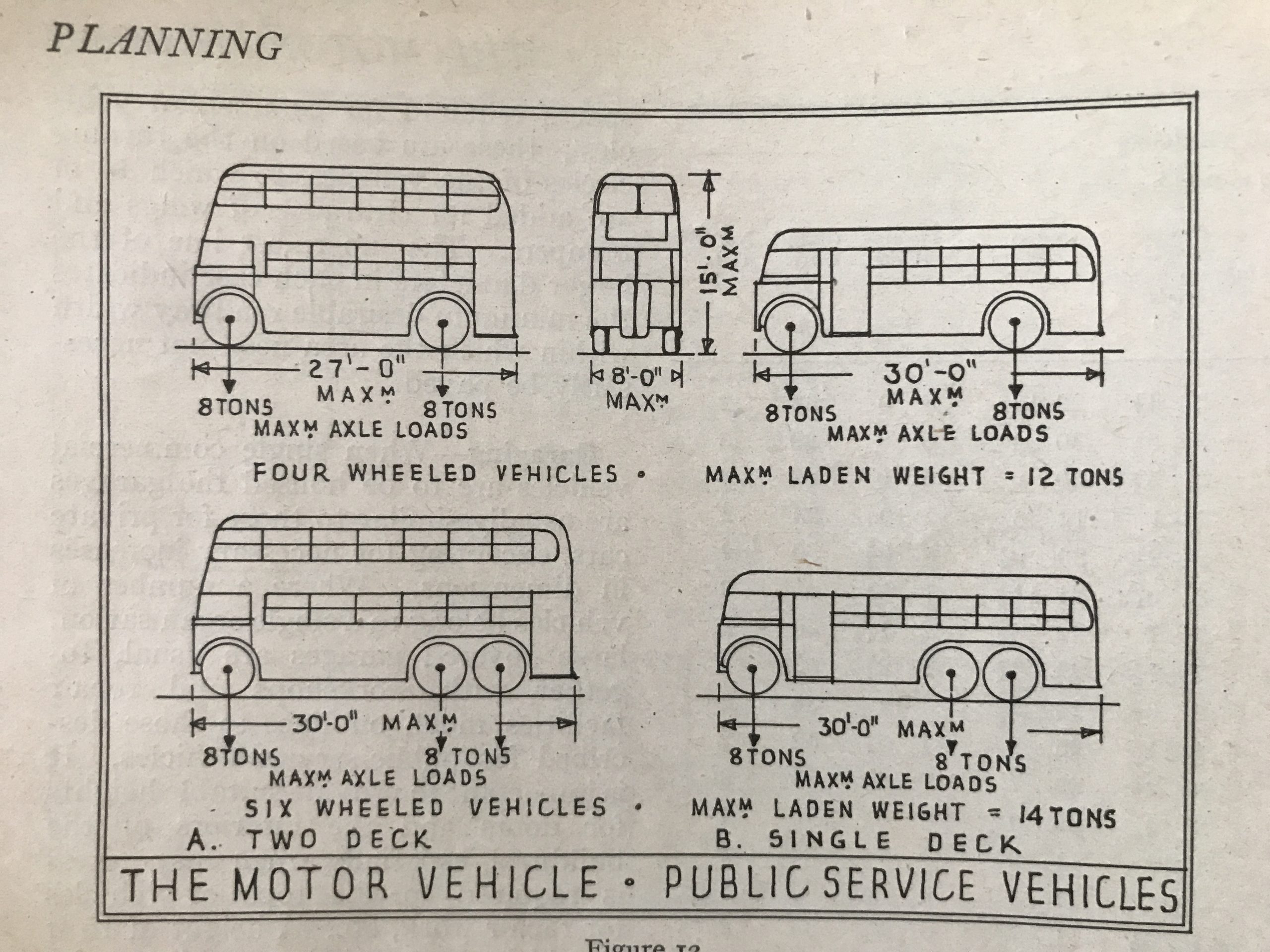 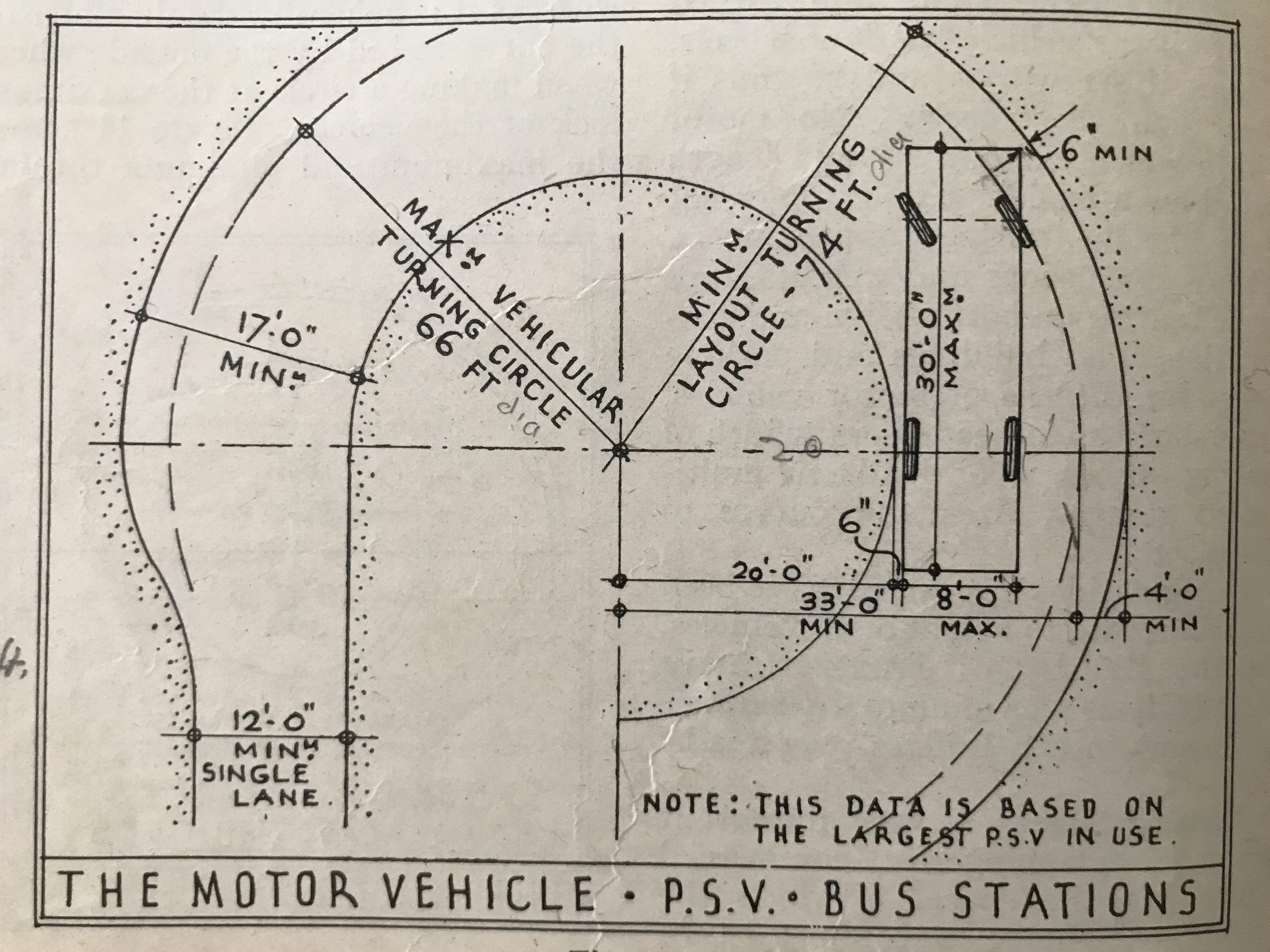 Below: This view is a sample from our base plan (albeit showing the cinema in its original location – it has now been rotated 90 degrees and reduced in footprint).  The R12 indicates the route of a six wheel trolleybus, coming from the Front Street and turning left onto Pockerley Road and also turning right out of (or left into) Front Street. 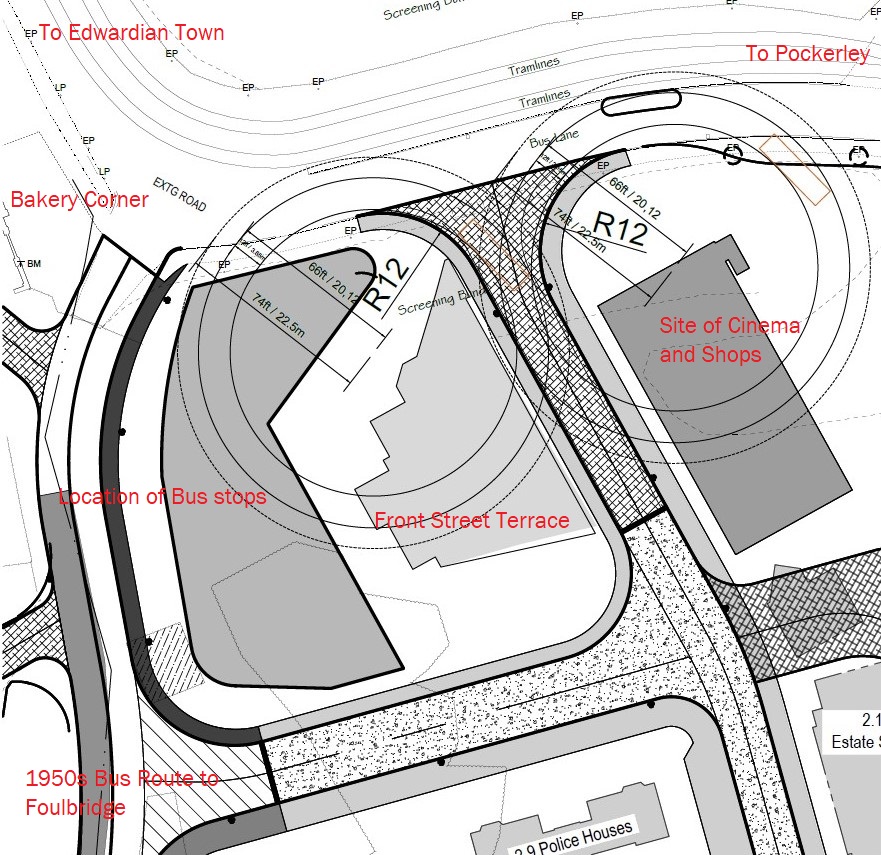 Below: One of the cooler places on site this week was the Colliery Engine Works, where 1370, 1 and 18 are seen resting.  No.18 was due to be in operation on Friday, as part of our ambition to run the Colliery railway once a week in the summer, but staff sickness thwarted this intention, for this week at least. 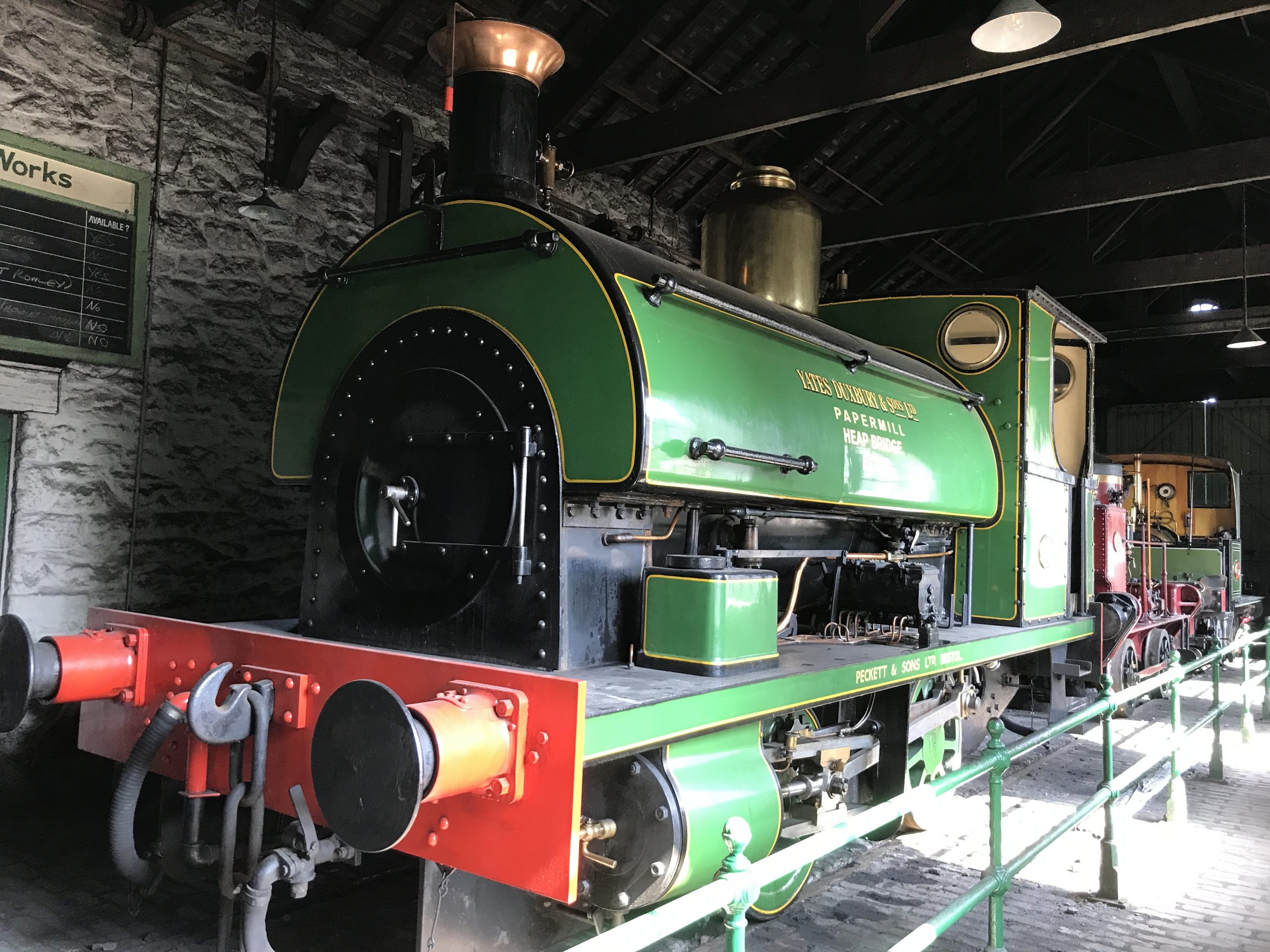 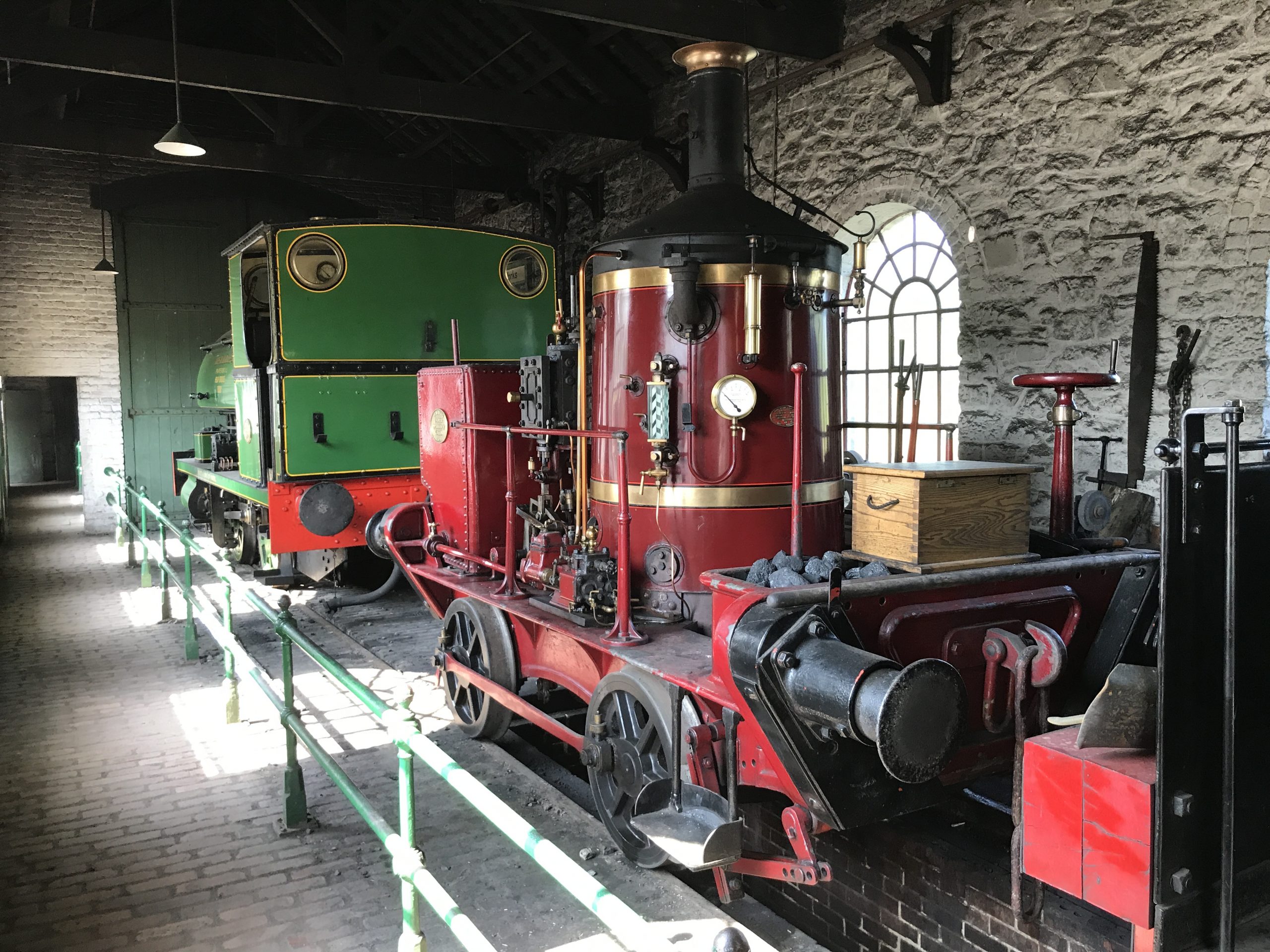 Below: Over on the other side of the Colliery yard, the new public viewing area for the narrow gauge has been prepared and opened.  The fencing, which has been noted as very yellow (it was what was available!) will fade to grey in time – if not, we’ll paint it.  The white gates will be removed into storage, as there is a plan for these in due course… 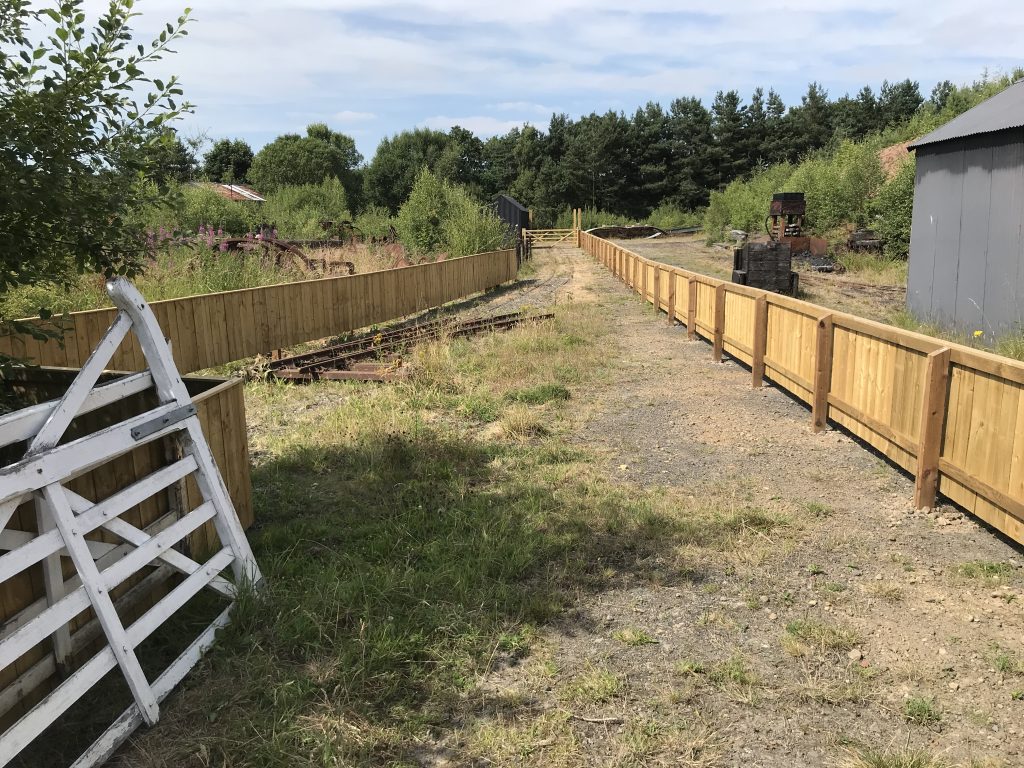 As I mentioned in the introduction, 716 entered passenger service today (for the first time since the late 1940s, or 1950 at the latest?), and the first passenger was presented with a selection of gifts from the shop to mark the occasion (as depicted in the header photo, with Terry, myself and Kieran plus visitors).  The bus will now operate in service, alongside J2007 (as and when required), and will, I hope, give visitors using 716 every bit the same experience as those who are using the other motorbuses around the site.  We are still looking at the possibility of a bus running-day in the autumn, which will give enthusiasts and visitors a chance to take a trip on 716, with J2007 covering the accessibility duties on the day. 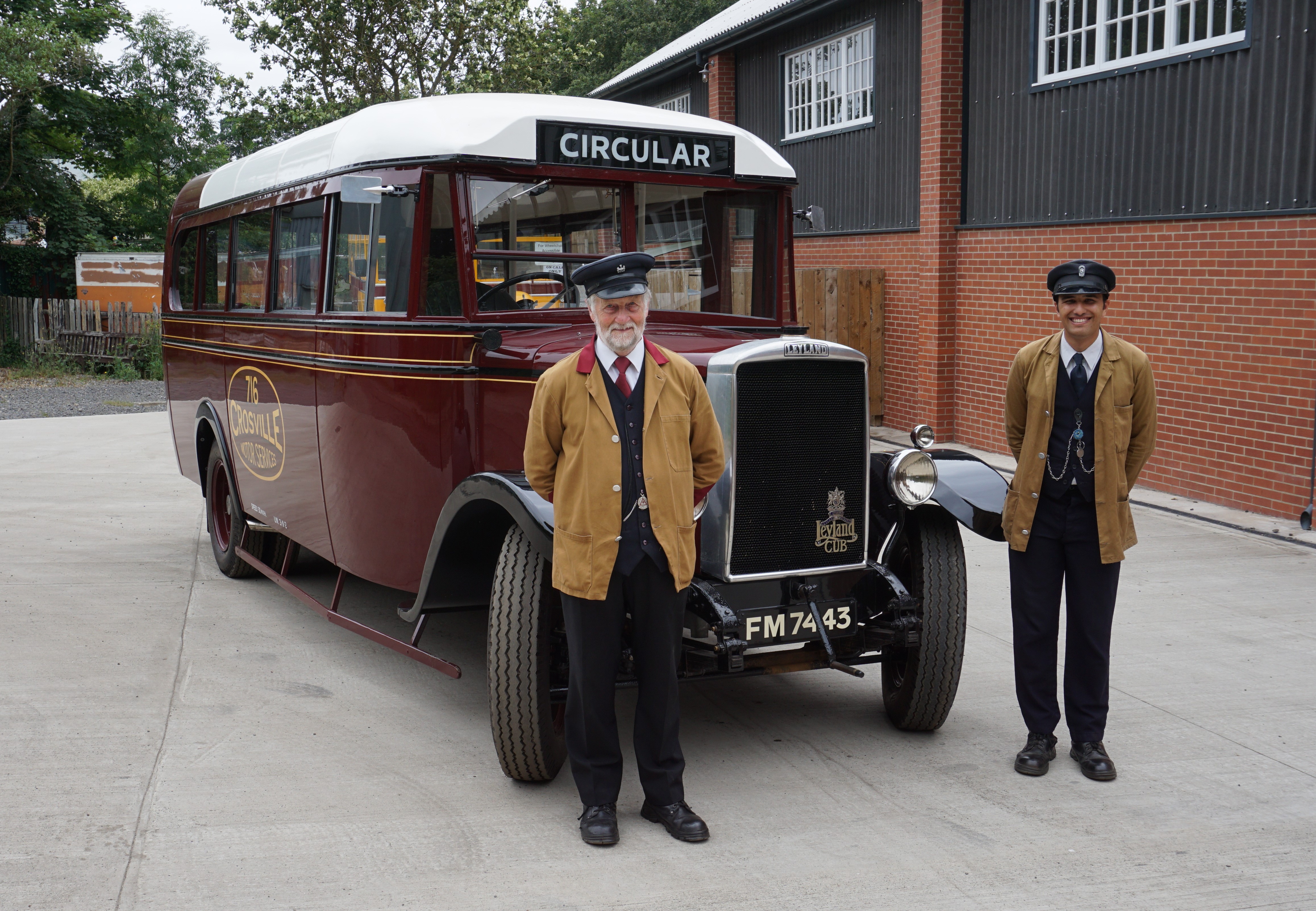 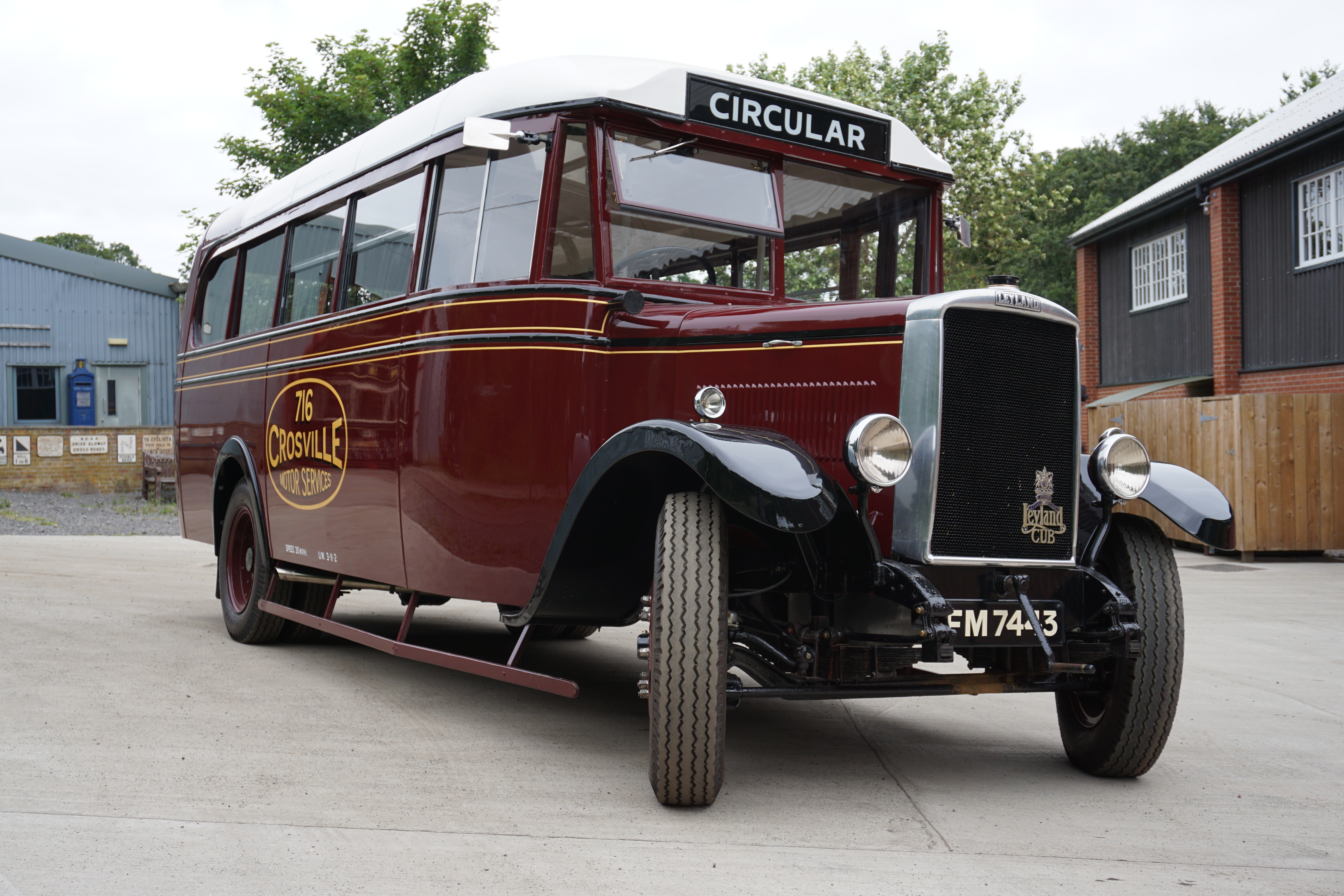 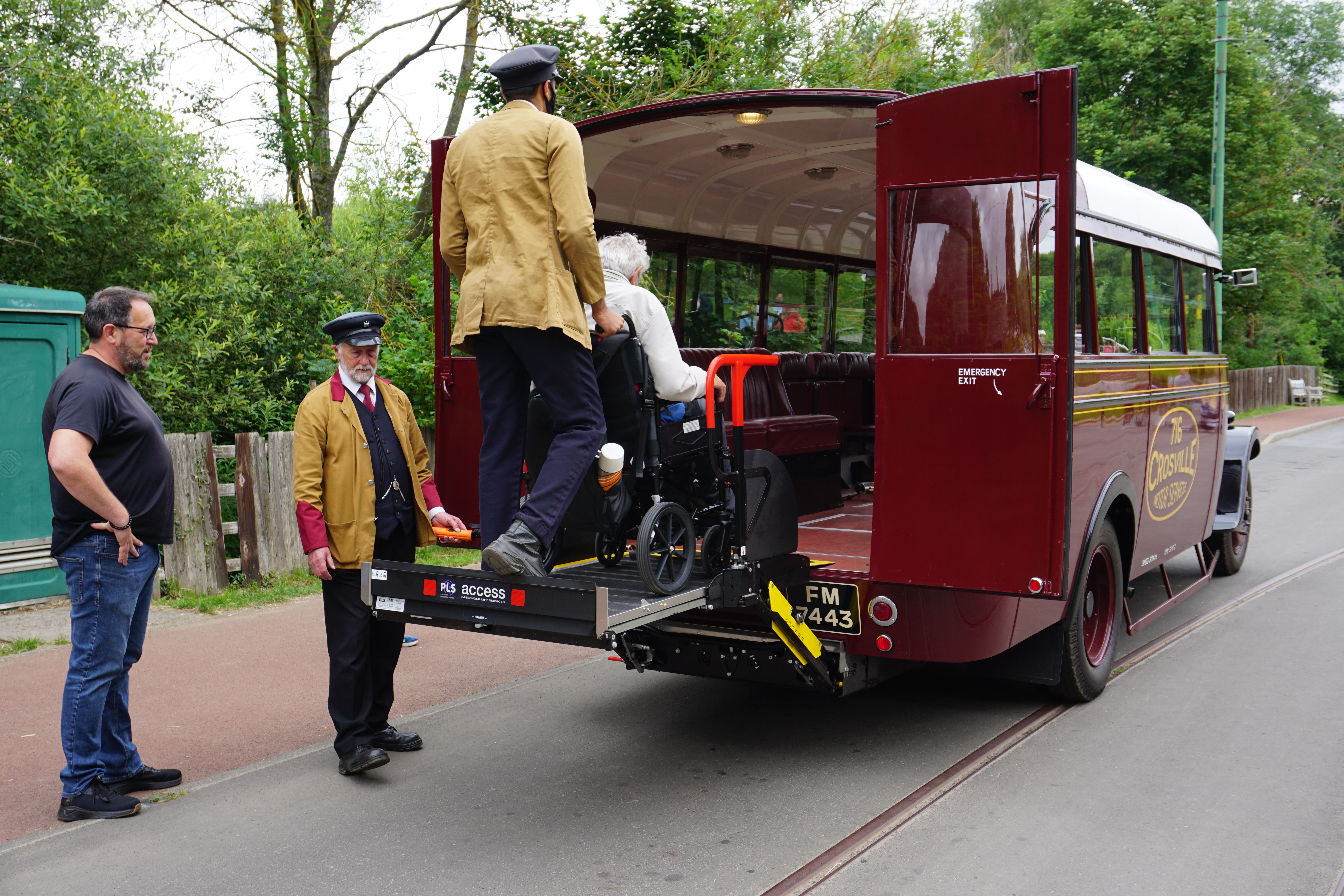 In other bus news, we are being joined next Monday by the Northern General Routemaster currently operating as part of the Go North-East fleet.  This will provide additional capacity until Darlington 4’s brake servo has been re-fitted following contract overhaul (it is being collected tomorrow).  The B-Type will then be focus of attention, to complete the paintwork and complete some mechanical work, enabling it to enter service after a long spell out of traffic.

Below: The Daimler D-Type has been placed back onto its solid-tyred wheels, and today (Saturday) was sharing the circular service with Rotherham 220. 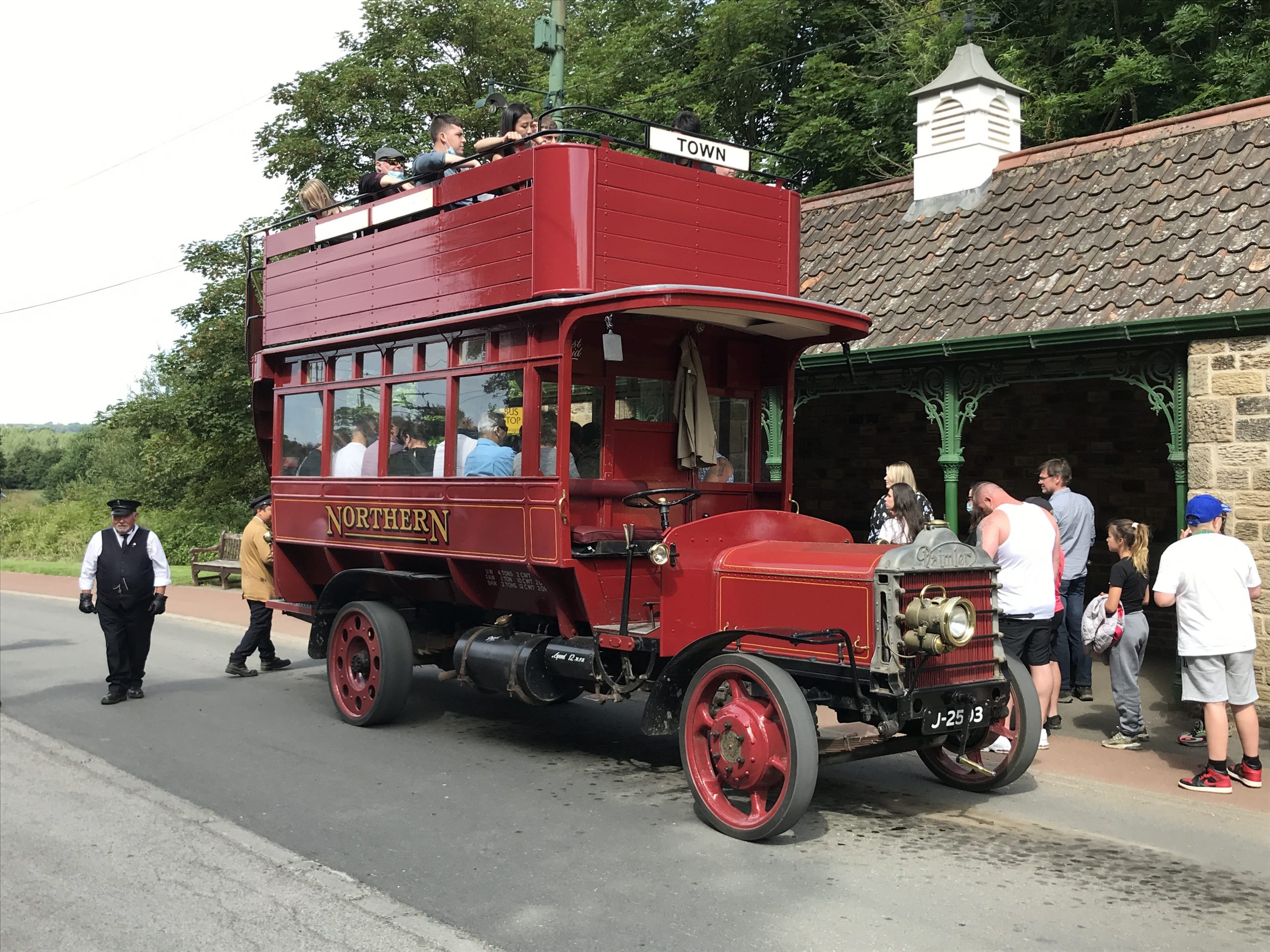