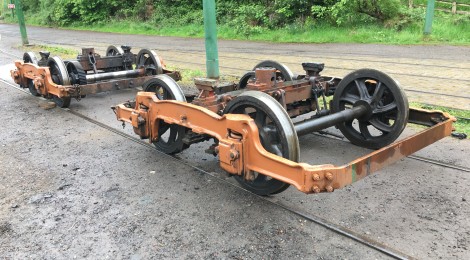 There has been a bit of a quiet spell on the blog lately – partly as not too much ‘new’ news occurred to report and also as a lot of what is underway tends to repeat what has appeared here before.  However, in the interests of keeping things up-to-date, here is a quick summary of what we have been up too…  As I spend much of my time now involved in the Remaking Beamish project, the blog may a little less frequent than it used to be, but I will try and ensure I keep it up to date as I know the transport and industry news is appreciated by readers.

What is very evident to us on the maintenance side nowadays is the sheer usage and resulting wear and tear on the working collections and infrastructure we now see.  The trams are obvious in this regard, but the steam side is not far behind, likewise the fairground, waste disposal infrastructure and other vehicles.  Our year-round operation is meaning that we are adjusting intervals for planned maintenance to take this into account – we no longer have lengthy winter down-time available as often some of our busiest days occur in this period – which is amazing when you think back ten years to the very sleepy semi-open state an average winter or spring day would reflect.  It is also something at the forefront of our mind in terms of future developments and their ongoing ease of maintenance to ensure their availability for the visitor engagement for which they, after all, exist.

Below: Our present tramcar situation is somewhat stretched, with four trams available but some days requiring four in service.  The on-going overhaul of Gateshead 10 has had to take a back seat of late, but now a renewed push is underway to progress the extensive mechanical works needed on the bogies.  To this end we are contracting a large amount of the work needed, including extensive welding on the bogie frames themselves and the overhaul or replacement of  numerous components from the suspension and brake systems.  10 was always known to be mechanically tired, and incorporated numerous Gateshead, British Rail and even Beamish modifications as a result of this – our aim is now to remove as many of the make-do repairs and return to first principles wherever sensible, in order to ensure the tram is fit for another 40+ years of Beamish service.  We have already spent £30,000 on this work so far, and this has seen some of the major lumps of expenditure completed (motor overhaul and re-tyring).  The electrical overhaul is progressing very slowly as an in-house job and this too will be accelerated. 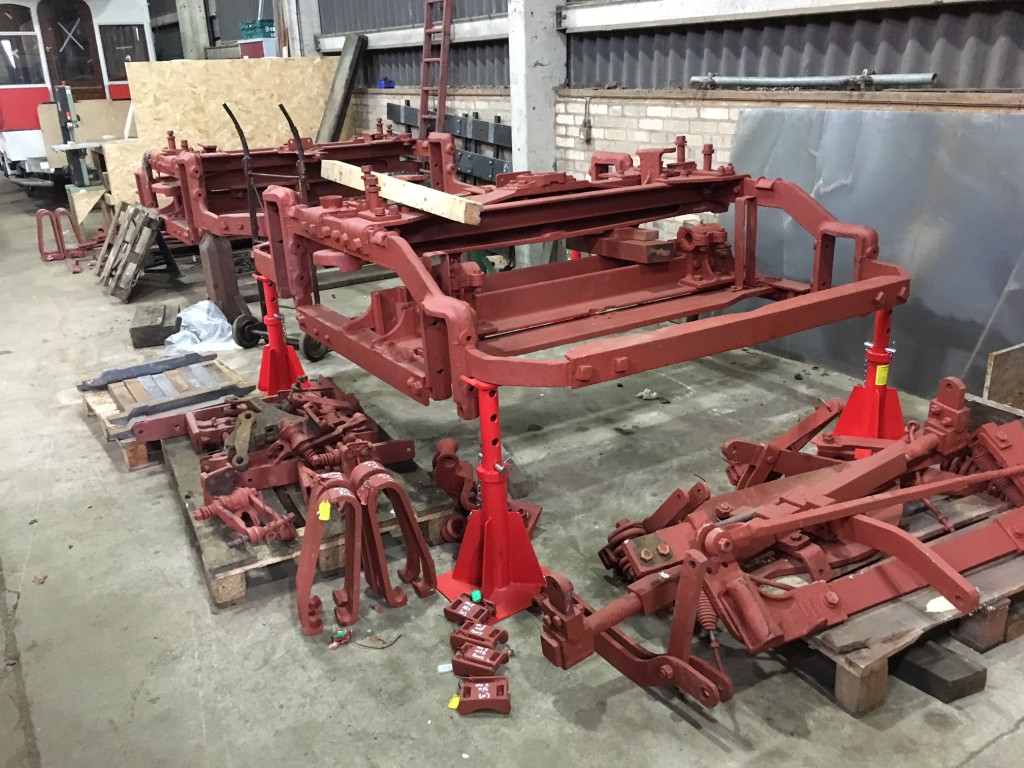 Below: Blackpool 31 returned from Blackpool with what we knew to be well-worn tyres (not such a problem on straight track but certainly an issue on our curved route).  It was decided to proceed with re-tyring as soon as it was back, and after an extensive clean and then mothballing, it was lifted to remove the bogies. 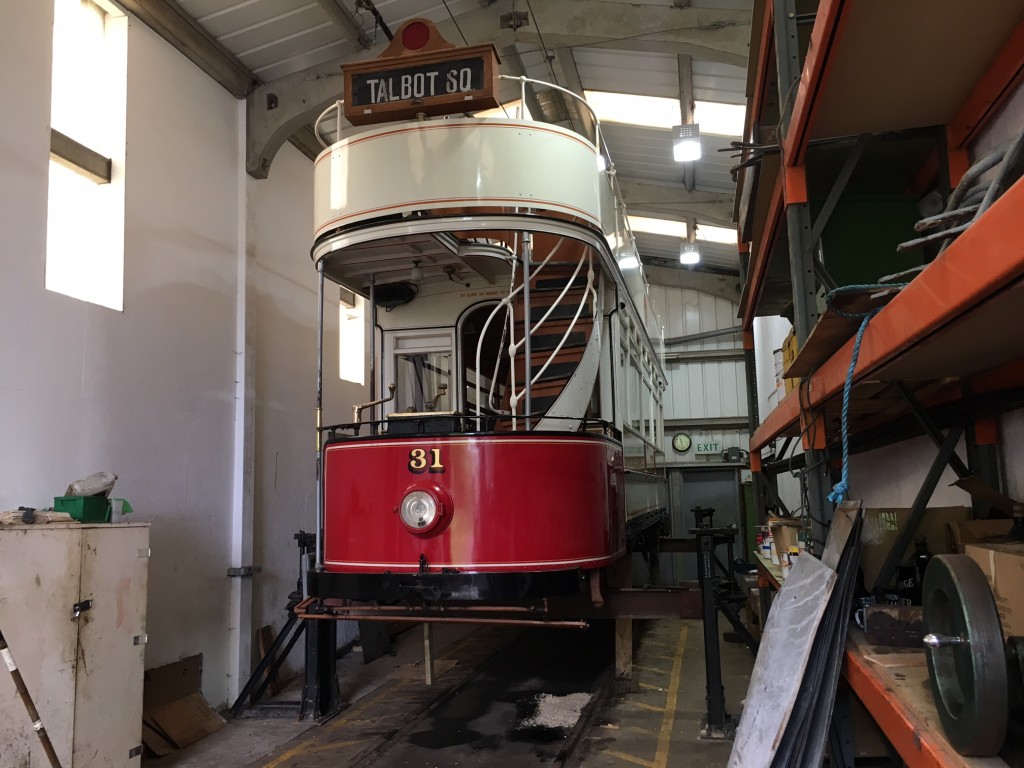 Below: The bogies are seen following removal of the motors and after steam cleaning.  The wheelsets will be taken out this week, then the tyres removed in readiness for the new tyres to be fitted.  There is a lengthy lead-in time for these, which are manufactured to our specification in South Africa and supplied via a UK agency for fitting by the Ffestiniog Railway in Wales.  The motors are also to receive attention, likewise the bogie pedestal bearing pads and some details of the axleboxes.  The intention is to have 31 back in service for the Christmas festival in November…  Visitors will ride the open-toppers in the cold weather, and 31’s entry into service will allow 16 to be withdrawn for tyre turning in the new-year, its high mileage already having accrued somewhere near it’s limit between turnings.  That work will be turned around as quickly as possible so that 16 can re-enter traffic for the spring – and failures permitting, we should have five trams for 2018 with 10 joining as a sixth somewhere in the year.  But as is always the case, the best laid plans do not always follow through and further trials and tribulations with one of 264’s motors necessitated is removal and repair (completed in a matter of days), so we never set our plans in stone these days! 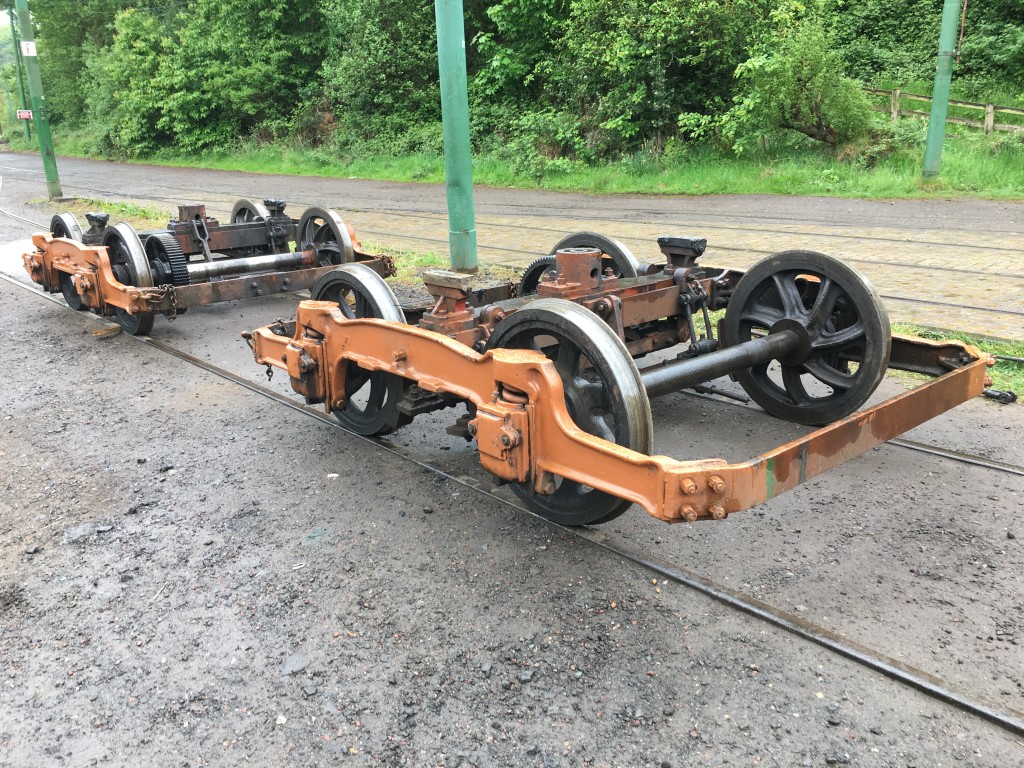 Below: The next road vehicle to enter service will be what was known as the S&N (Scottish & Newcastle) van, which was built by Fleur de lys and has become a very well-worn object in the last ten years or so.  It has had extensive work carried out on it and a repaint will shortly follow – the aim being to return it to its team for use in food deliveries on site as soon as we possibly can, enabling the Morris Commercial to follow it through the same process, again as soon as we possibly can – the need to obviate use of modern white vans on site is a priority. 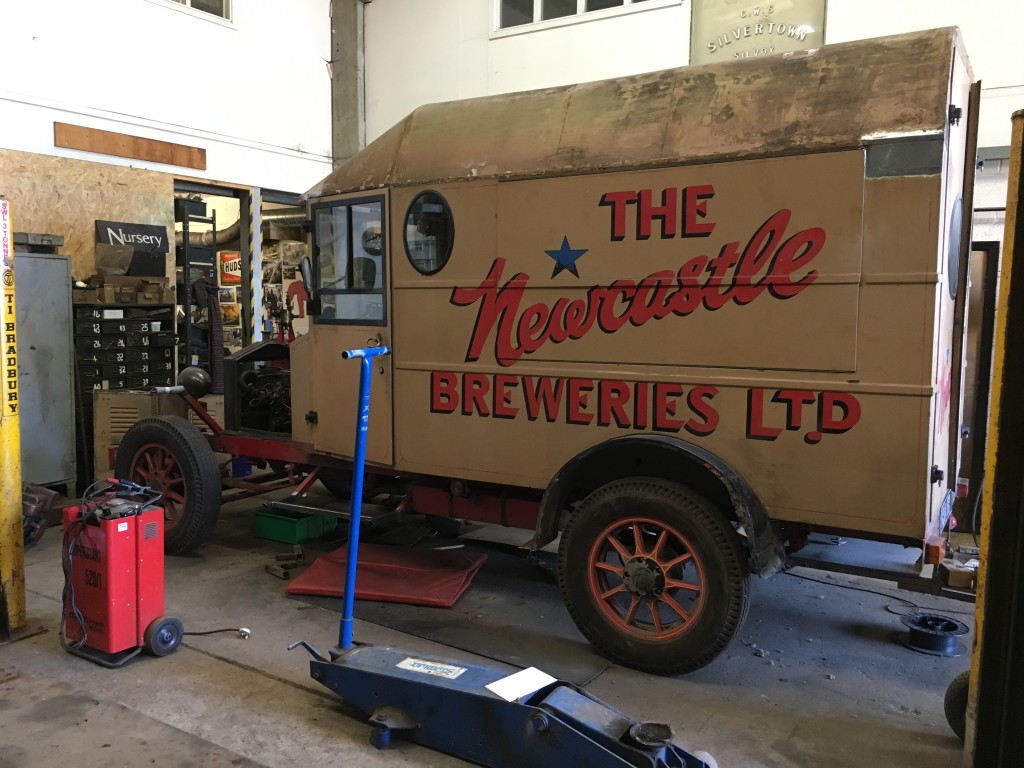 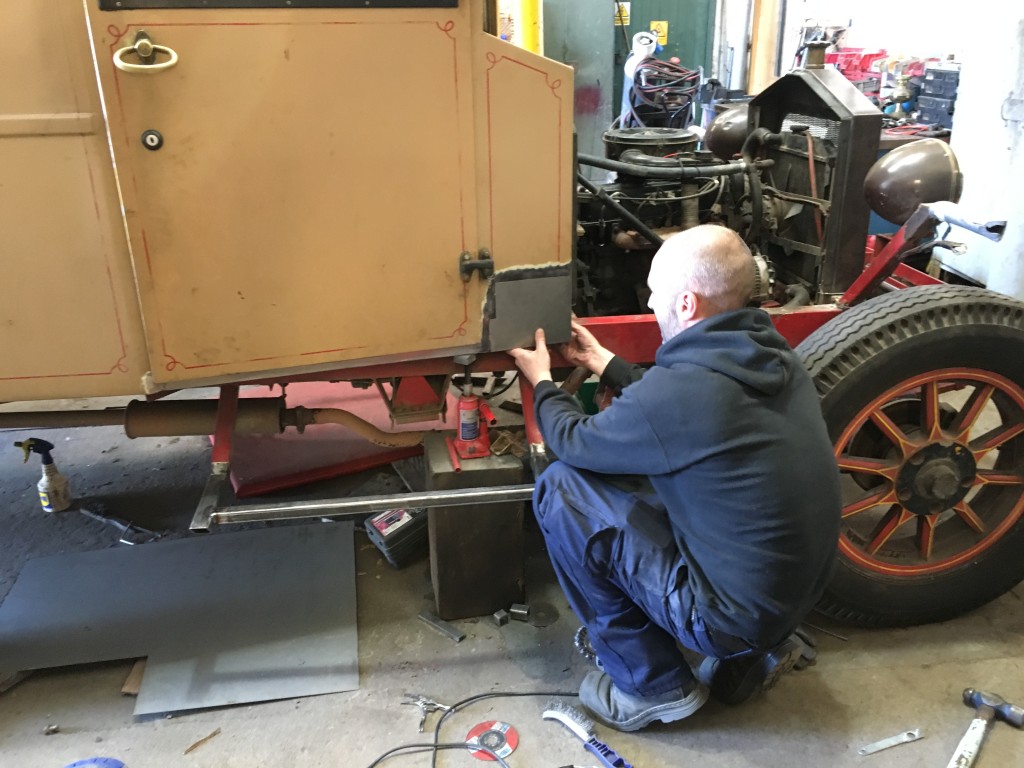 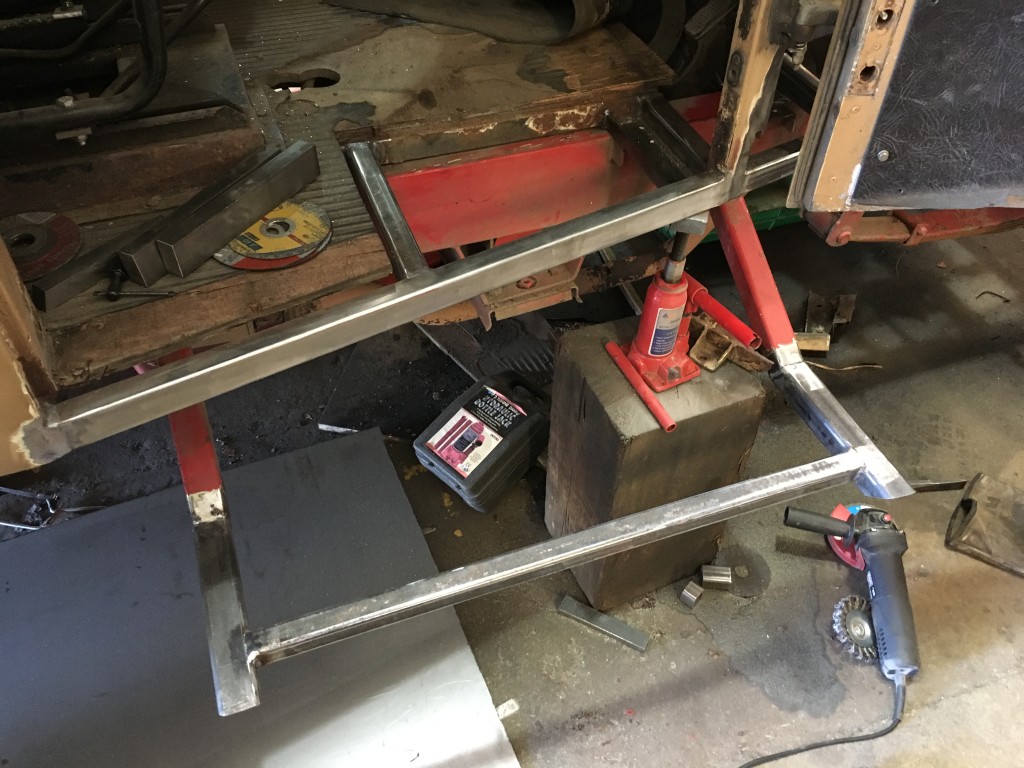 Below: These new barriers are for the ends of the platform at Rowley.  Tony and Matt have made these in their usual blink of an eye timescale, and they will add a rather more railway-like obstruction to the platform ramps, replacing milk churns and brewery barrels in this role.  In the background are some of the footboards for the Duke of Sutherland’s saloon 58A, whose restoration is nearing completion. 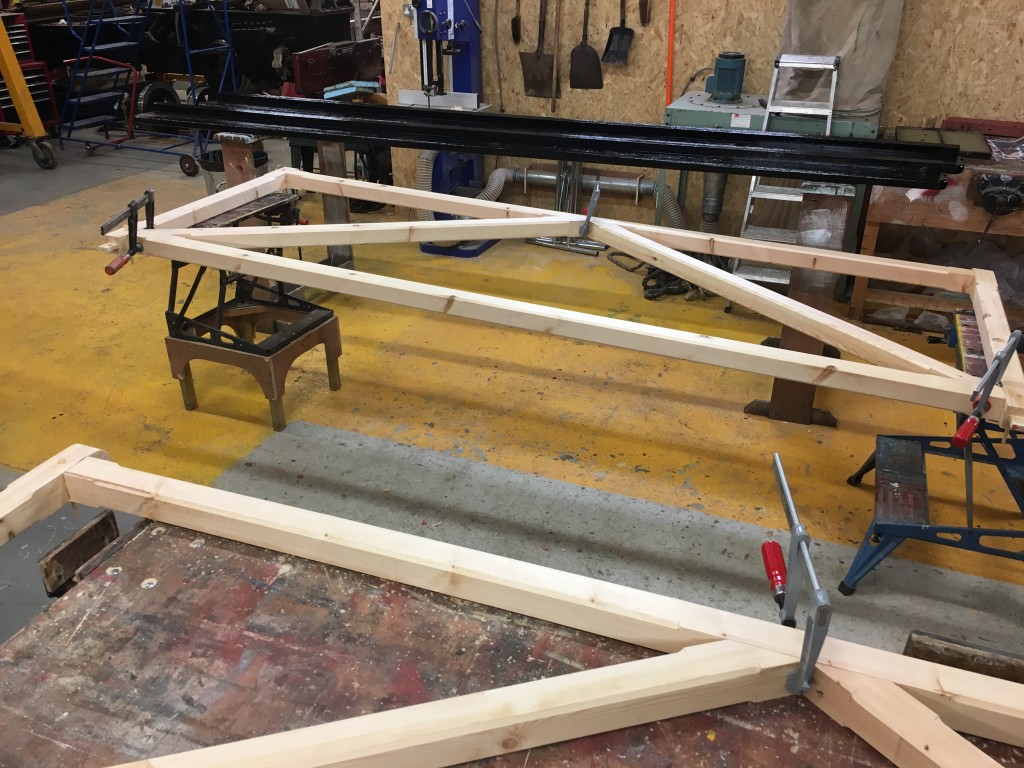 Below: Some time ago, shortly after the Sinkers catering outlet was created, it was realised that additional storage for stock was needed – the demands outstripping the stock the team there can easily store without it being a trip hazard or unsightly.  We initially designed and constructed a shed for use in this role, but which was then appropriated to become the toilet block on the Fairground field.  A metal lock-up garage was then built, but this was again purloined at short-notice to become an auxiliary building for the ice rink.  Clearly we aren’t having much luck with ‘temporary’ building designs so are now proposing to build a row of netties (toilets) in the space shown below where the vertical sleepers stand.  These are based on those that once stood behind Francis Street and externally will look like netties, though internally will be divided into two spaces dedicated to hygienic storage of supplies for the Sinkers.  That’s the plan anyway!  The wooden hut to the right of this view has in the past been used to store refuse materials, but the provision of the skip (and enclosure) in the yard has meant it is now available and Jonathan is looking at a horology ‘works’ as a possible use for the space, once the floor has been rebuilt and other repairs completed.  This would be a working area for our active clock-maintenance volunteers on site and will add another backstreet industry to the Pit Village story.

The design is just been finalised by Steve Elliott, our architect (borrowed, or rather, distracted, from the Remaking Beamish programme for the purpose!) and we will run this project as a maintenance one, as the building team (wearing my other temporary hat) will shortly be starting work on the final dismantling of Spainsfield Farm and then the commencement of the replica of Joe the Quilter’s cottage in the Georgian landscape – the first building of the Remaking Beamish development and being run in parallel to the huge infrastructure contract which will start later this year to prepare the 1950s and Coaching Inn sites for their new buildings. 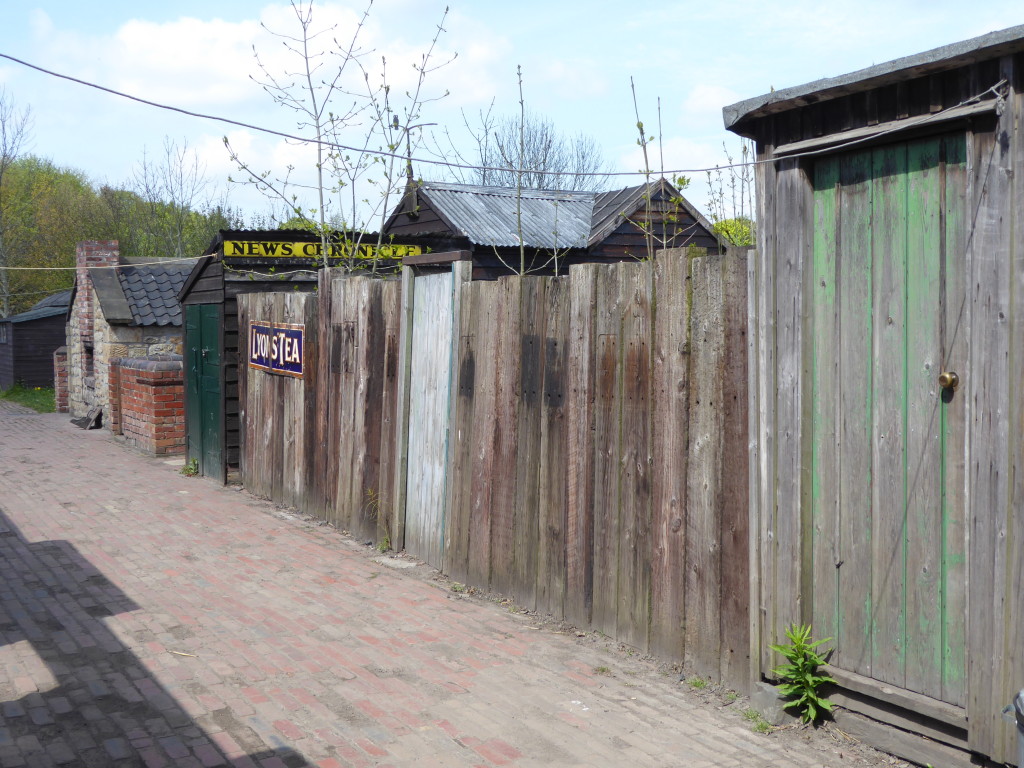 Below: From the railway operation point of view the tipping of ash is a real problem in this area – the ash coming from the cottages and is simply tipped over the fence until it builds up and obstructs the railway and pushes the fence over!  As part of the store development above, an ash ‘clamp’ (basically a concrete apron) will be created in order that all ash can be tipped there for mechanical removal and use on the railway or around site, either by loading the side tipper waggon or taking away by more modern machinery.  Hopefully this will enhance everyone’s lives in the Pit Village as well as saving the repeated demolition of the fence. 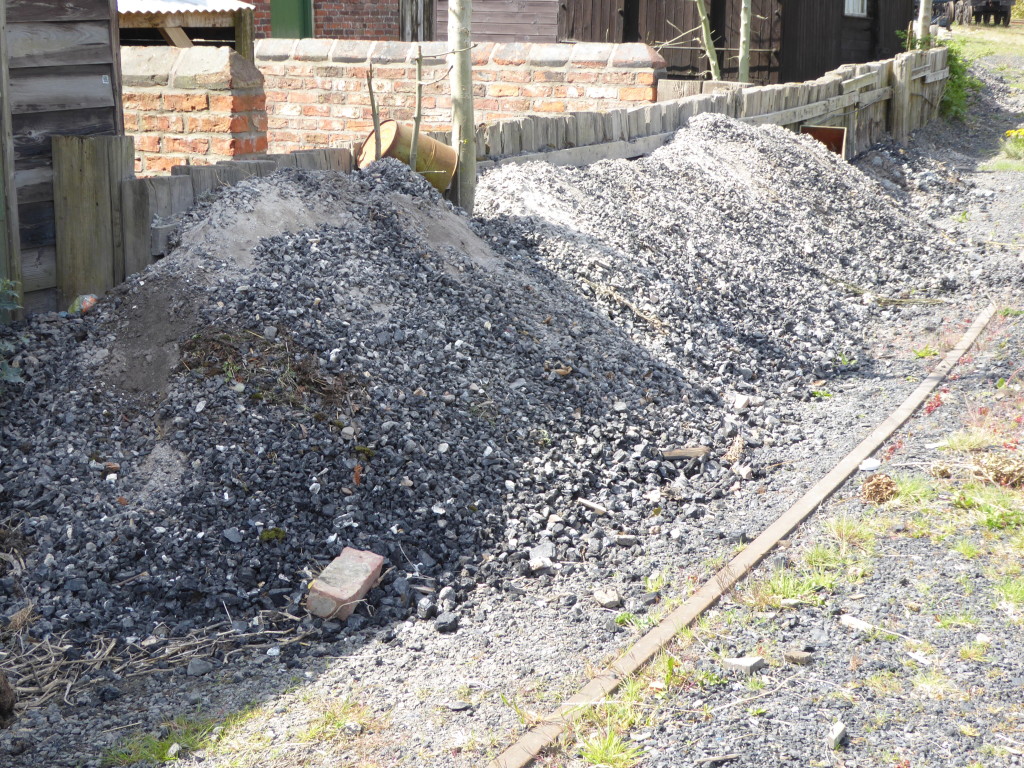 Below: The W H Smiths kiosk in the Town tram shelter is now complete and fitted out, ready for its new occupants (the Period Food team).  The light fittings may be swapped for something more Edwardian in due course. 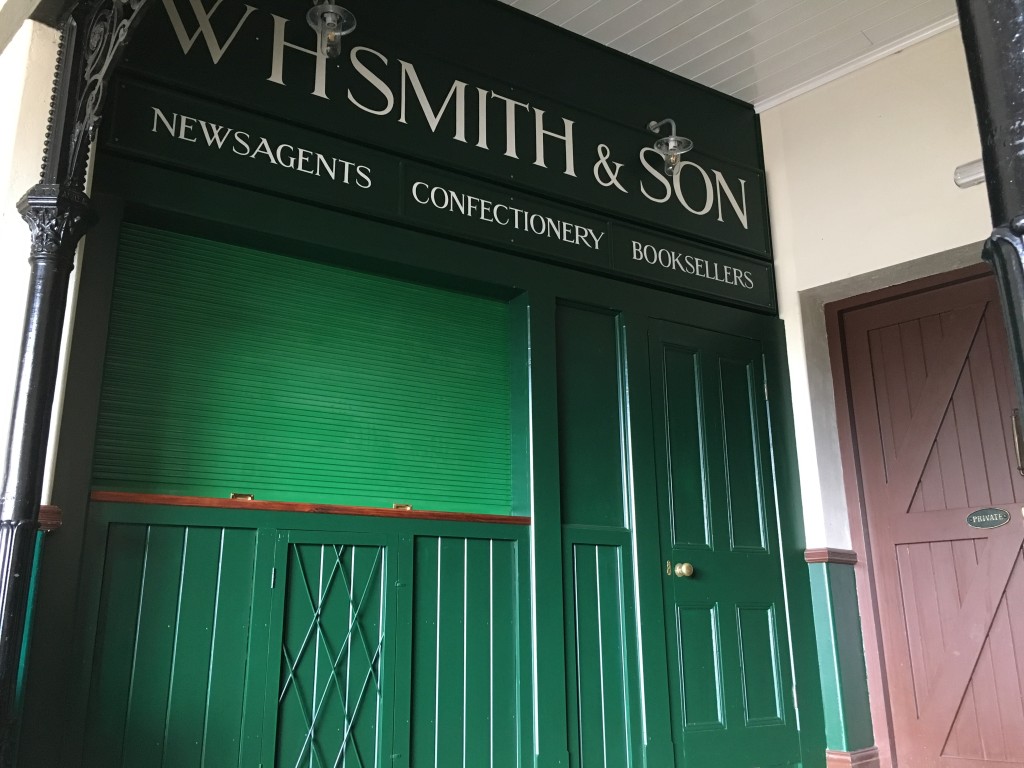 We’ve reached a point in the season where the Colliery standard gauge railway should be in regular operation, and this pattern started, but then ended as soon as it had begun after No.18 was failed.  This naturally timed with some staff leave which means that at present repairs are pending.  Coffee Pot does not lend itself to daily operation, in particular for the have-a-go courses that are run in this area.  Whilst repairs are being undertaken we are looking at our options for a spare locomotive in this area, in order to be reasonably certain of delivering both the operational requirements and the courses.  As 18 is now 140 years old we can expect some problems, but it is frustrating, in particular as the new brasses etc. which are now fitted to all of the coupling and connecting rods were just starting to run-in!

Below:  We start this area with a look at Samson, seen here running at Beamish for the first time with its new tender, whilst assisting with some shunting that was taking place. 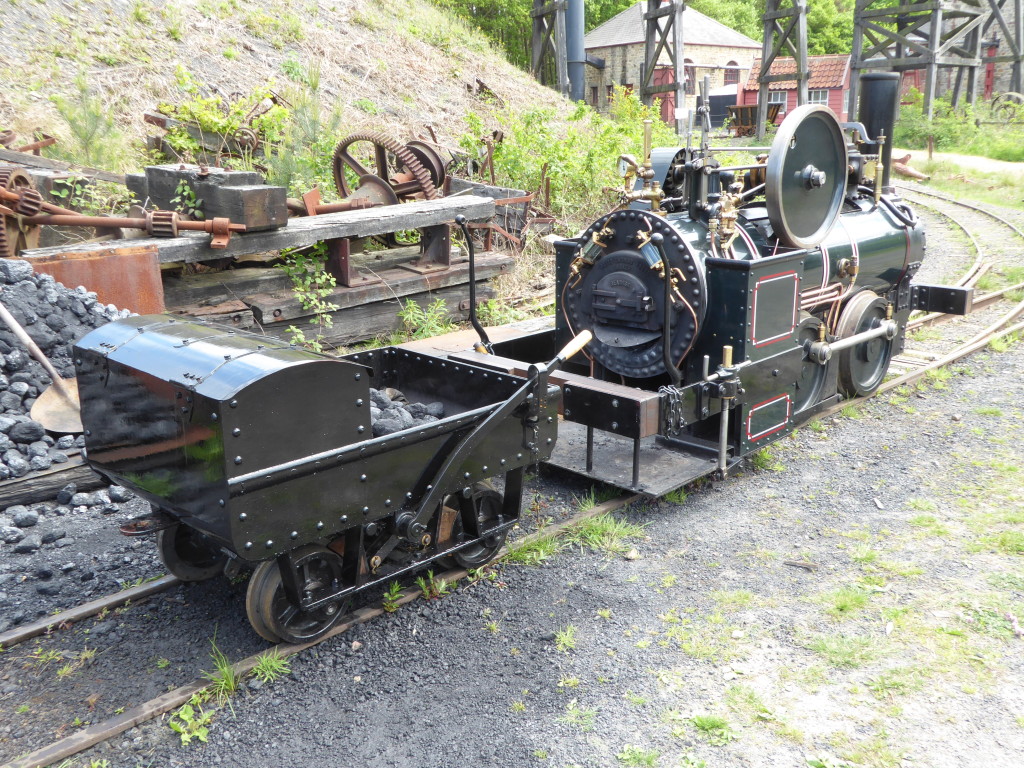 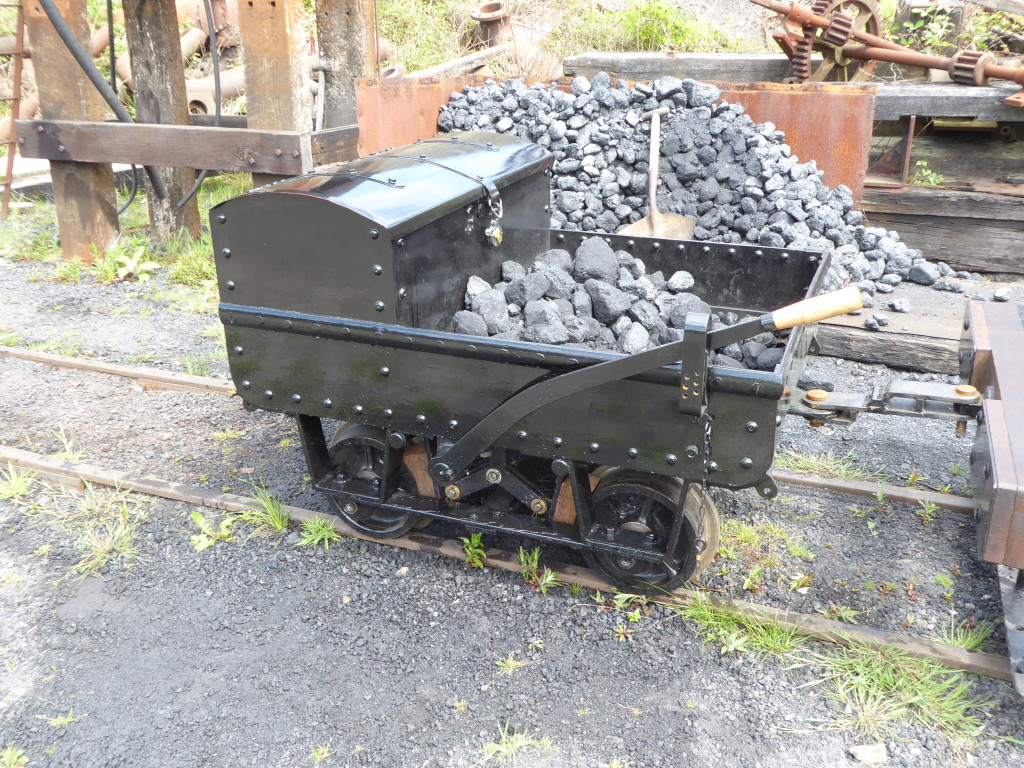 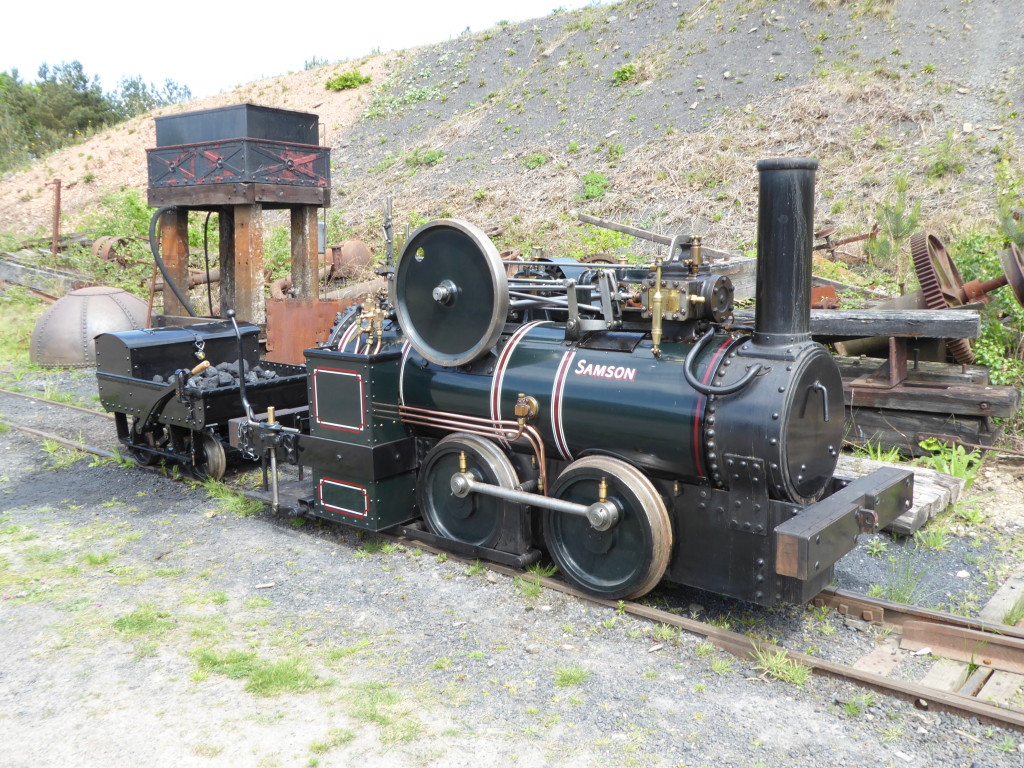 Below: It is amazing how quickly new construction settles down, with the narrow gauge embankments now being green and verdant!  The hot weather has caused some movement in the track and further attention with the Jim-Crow will be needed this year to ease some of the curves back to their desired radius.  The area shown will soon feature (it is planned) some tall gates, to enable part of the old standard gauge trackbed to be used for storage of materials for Remaking Beamish – the gates being needed to hide these materials from the Pockerley direction.  We currently have plans for several additional materials storage areas as there will be quite a critical need for pipeline deliveries to the various construction sites and whilst this location is not ideal from a railway point of view, it is very accessible for collections handling.  As well as the gates, I’m looking at estate railings from the gates, all the way to the fence at Pockerley, to really open up this area for watching the railway operations but also to enhance the landscape here, especially the view as you approach Pockerley from the Town and can see across this area.  I also wonder if we should put a ‘feature’ into this triangle – possible a stone water tower might look nice…!!!  We have a heap of stone sleeper blocks that need re-stacking, plus a tank, so that might form the basis of something useful and also attractive in this area. 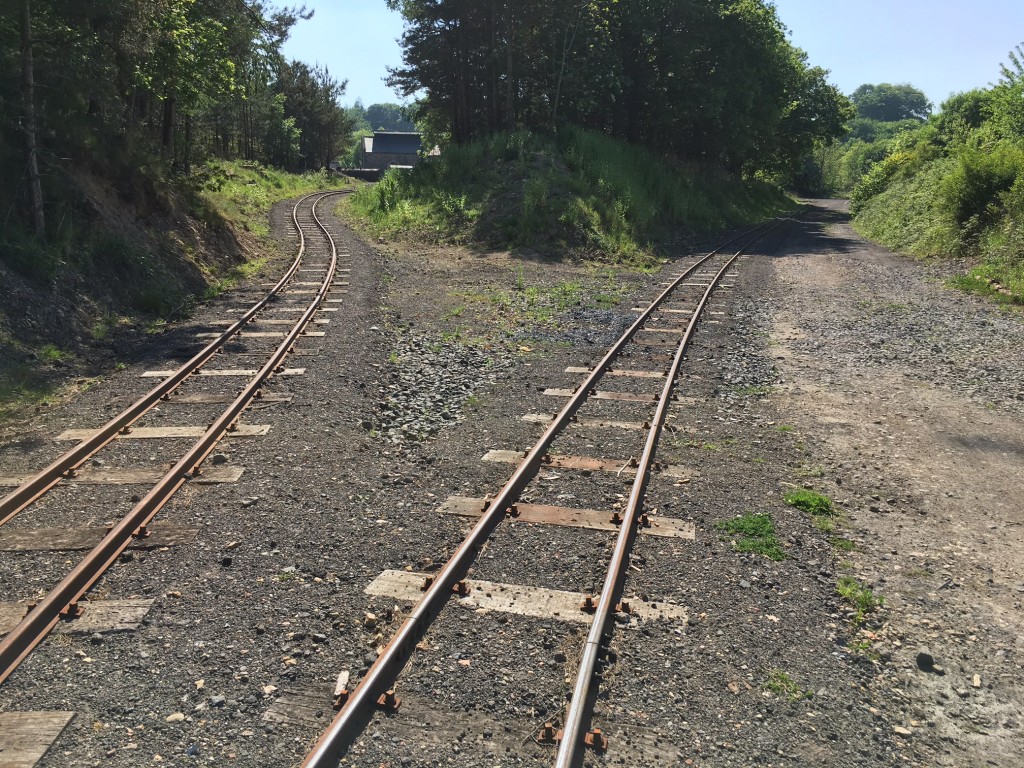 Below: Wednesday and Thursday saw a fair bit of shunting taking place on both Colliery lines.  This was to release Edward Sholto from the flat waggon display and replace it with the Dundee Gas Works Kerr Stuart.  Edward Sholto is to be re-tubed shortly to give us some narrow gauge motive power other than Samson, whilst the Kerr Stuart is a longer-term prospect, so will go on display inside the engine works.  The growth of grass this month has been impressive… 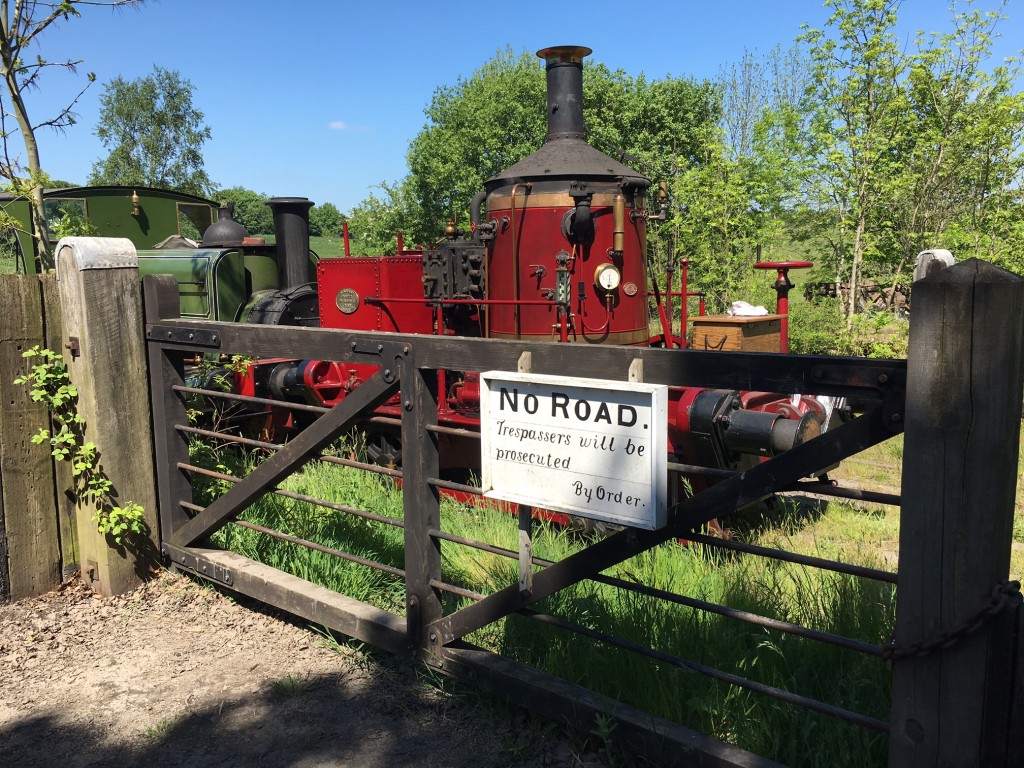 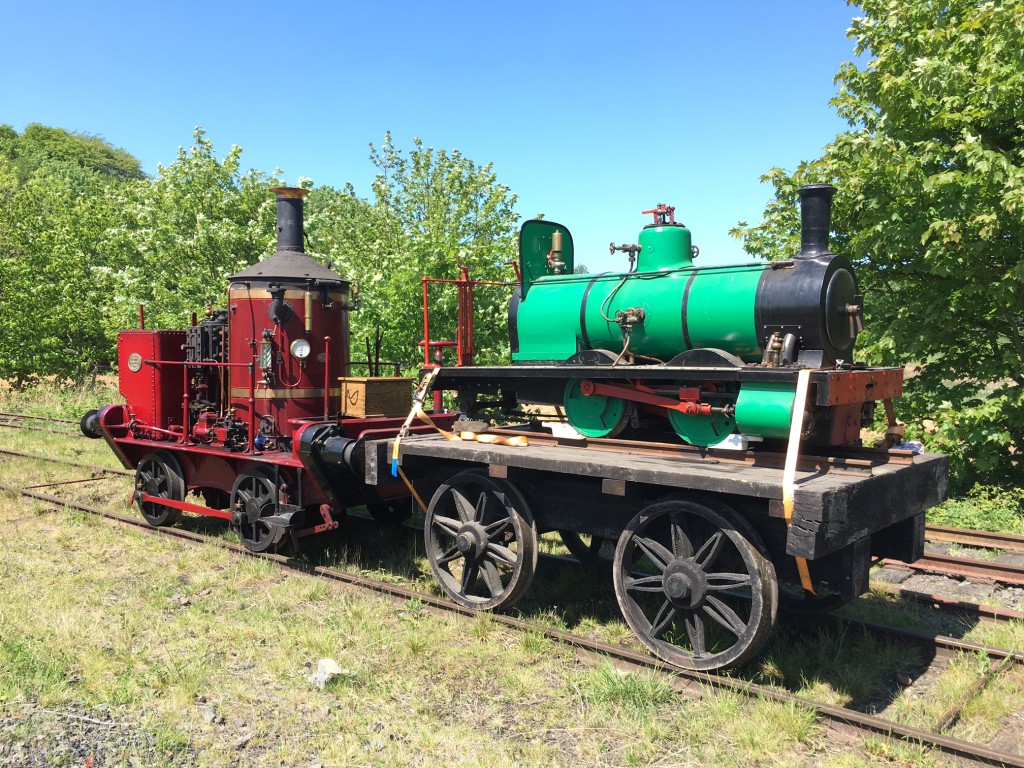 Below: The 40HP Simplex is proving invaluable in shunting the narrow gauge – but in sunny weather it gets extremely warm inside! 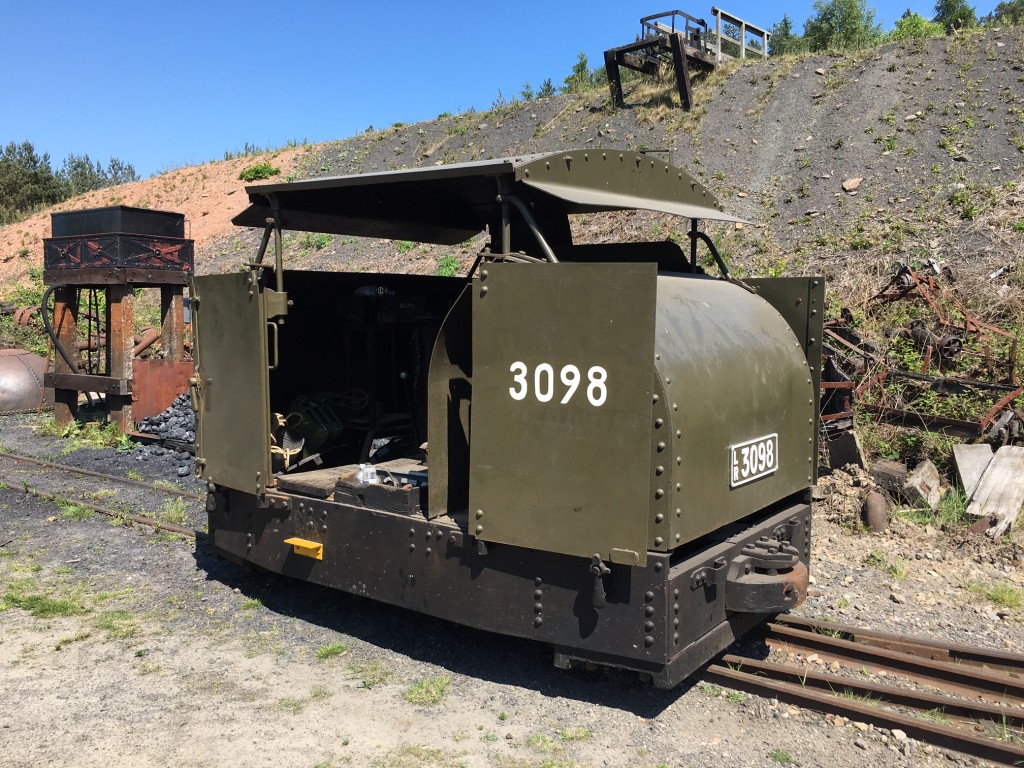