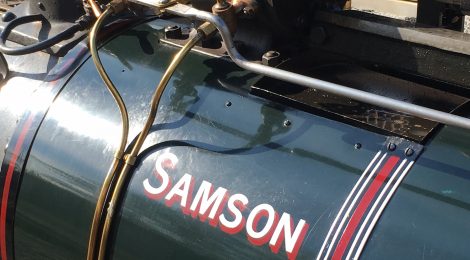 A shameless plug: Samson, a review and reflection (please buy the book!)…

As material for the blog is a little in short supply at the moment, I thought that I would reflect upon one of our relatively high-profile transport projects in recent years, the construction of Samson, our version of the 1874-built Stephen Lewin 0-4-0WTG locomotive supplied to the London Lead Company for use on a tramway (narrow gauge mineral railway) between Cornish Hush and Bollihope, to the south west of Frosterley in Weardale.

You can find all of the relevant posts via the drop-down menu on the left hand side of this page, under the heading ‘Samson’. There are something like 100 posts featuring it now, so it seems opportune to reflect on this rather unusual centenary (or thereabouts!).

As blog readers will no doubt be familiar with the story, I will not repeat much here, except to say that copes of the book are available online here: https://beamish.digitickets.co.uk/products/95480?navItem=192432

If you don’t have a copy of the book, please do consider buying one – the online retail arm of the museum has been vital through this difficult year and will continue to be an important source of revenue for us in the future. Shameless plug over.

It is very sad to report that the designer and publisher of the Book of Samson, Roy Link, sadly passed away recently. Roy was an enormously talented railway modeller and graphic designer, and was instrumental in encouraging me to write the book (originally anticipated to be more of a booklet) and then to turn this into the rather beautiful publication that arrived from the printers.

I had written articles for Roy’s modelling themed magazine over several years, so it was a wonderful experience to write on a much larger scale, and to send images and raw text to him, then see the superb page design that he returned for proofing. Roy was able to see and inspect Samson in steam during the May 2017 visit to the Ffestiniog Railway. He also included updates on some of the additional work we carried out in his magazine Narrow Gauge & Industrial Railway Modelling Review (https://narrowgaugeandindustrial.co.uk). He will be very much missed by those who knew him, and those who know his work.

In a quick trawl of YouTube films, produced by myself or the museum, I’ve found a few of Samson that I am sharing again here for the interest of blog readers. There is also one local news piece and we cover the start of construction with the first runs of the engine unit on air, through the rivetting of the boiler at Bridgnorth to the testing and subsequent launch of the locomotive.

Since we finished Samson, we have gone on to evolve it a little… The tender was an early addition, and the current work to improve the weight balance of the loco is incomplete awaiting reopening of the workshops. I have, however, managed to finally complete the lining, the front boiler band now matching the rest of the loco!

The new front bufferbeam/coupler is yet to be tested, but a new rear buffing arrangement is also planned. The modifications to Samsons valve ports produced a marked change in performance with the loco much stronger than it had been previously, and this is something we hope to enjoy in the years to come. For now, it is stripped for its next boiler examination and awaits completion of the buffing gear whenever we can reopen the workshops. The plan is then to put it into traffic and carry out further driver training so that the operational staff are able to safely and competently run Samson, hopefully more regularly than we have been able to manage previously.