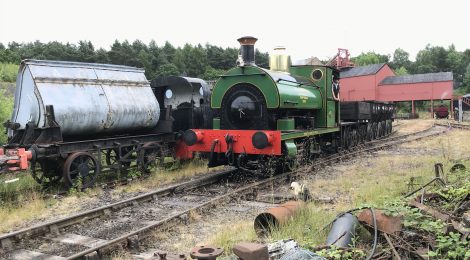 In this post we look at some non-engineering activities that have been underway over the last week or so…  Work is still underway to look at the potential operation of the tramway later this year.  It is, (inevitably) not as straightforward as many would hope, but we will work very hard to try and meet the visitor expectation to see trams operating around the museum as soon as practicable.

Below: With Peckett 2000 having departed for Cornwall recently, and with Peckett 1370 currently based in the Colliery, the opportunity to use the Regional Museum Store (RMS) railway section for storage has been taken.  Several road vehicles are being placed into store (including the Austin Hearse, Commer van and Wolseley car), as well as the gallopers packing truck and centre truck.  With no short-term prospect of carrying out the necessary overhaul on further elements of this ride, and with the arrangement with Arthur North for his travelling fair to be based at the museum working well, we are placing as many related artefacts into covered storage as possible.  The centre truck has resided in the Waggonway shed since it was last used, and the space is required in order to more fully reopen the Great Shed and remove non-period objects from the area.  All of the vehicles placed into store don’t readily fit into our engineering/engagement programme in the short-term, and so placing them into store will help reduce further deterioration or remove them from spaces now needed for other jobs/activities.

Stuart Ritchie (E & N Ritchie, Hetton Le Hole), who is well known to us via his historic vehicle collection as well as haulage work, carried out the movements for us using his ERF lorry (which has been a support vehicle for the Show Organ Society), enabling the work to take place during opening hours and for visitors to watch the proceedings.  We are also still without a tele-handler for haulage work; one of the current cost-saving initiatives as these vehicles can cost upwards of £1200 per month to hire.

Below: Having towed the packing truck to the locomotive preparation area outside the RMS, the ERF was reversed in order to propel the truck into the building, it being far easier to shunt drawbar trailers this way.

Below: The centre truck was then retrieved from the Waggonway, and moved to the RMS to join the packing truck in store. 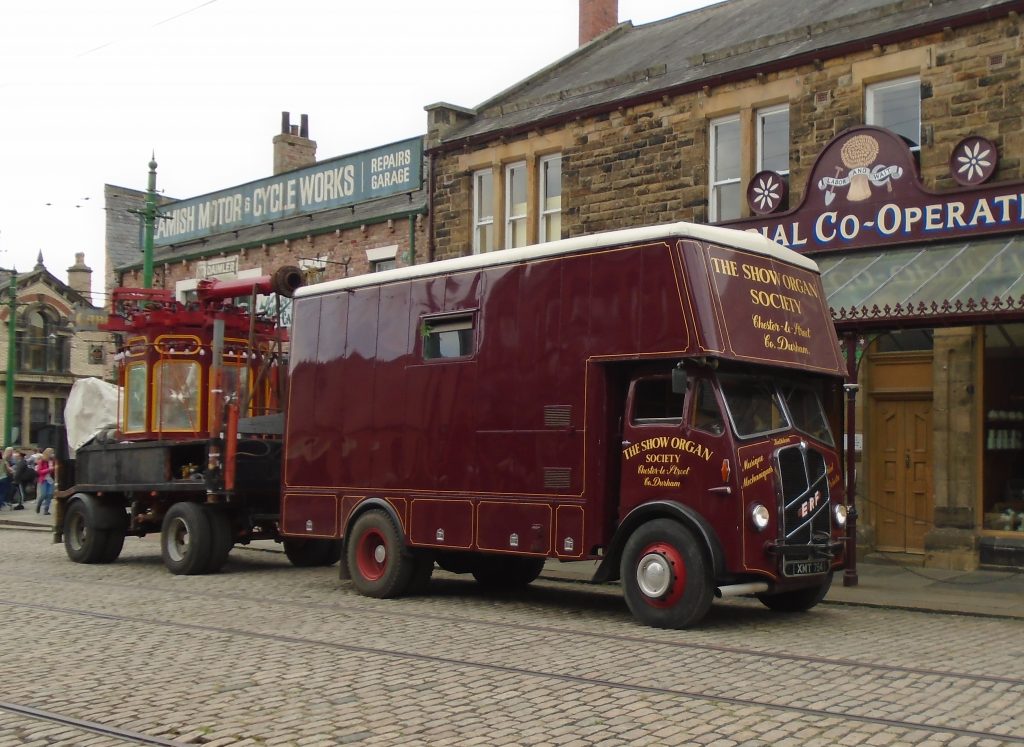 Below: The Wolseley is one of the smaller vehicles to be placed into deep storage.

Below:  The 1933 Commer van is also being placed into store.  It is in very poor mechanical condition now and will be a long-term project to restore to operation.

Below: The two Fordsons to the left, with the Smiths electric van and Austin 20 Hearse have been placed nearer the front of the store.  The fairground organ will fill the space at the front of this view.

Below: The staff at Rowley (for it remains staffed, albeit with no trains running) have started weeding the track.  The poorly drained ash ballast is a fertile environment for weeds, even with weed killing treatment.  This is an important aspect of the maintenance of a North Eastern Railway scene, but certainly a time-consuming one to retain. 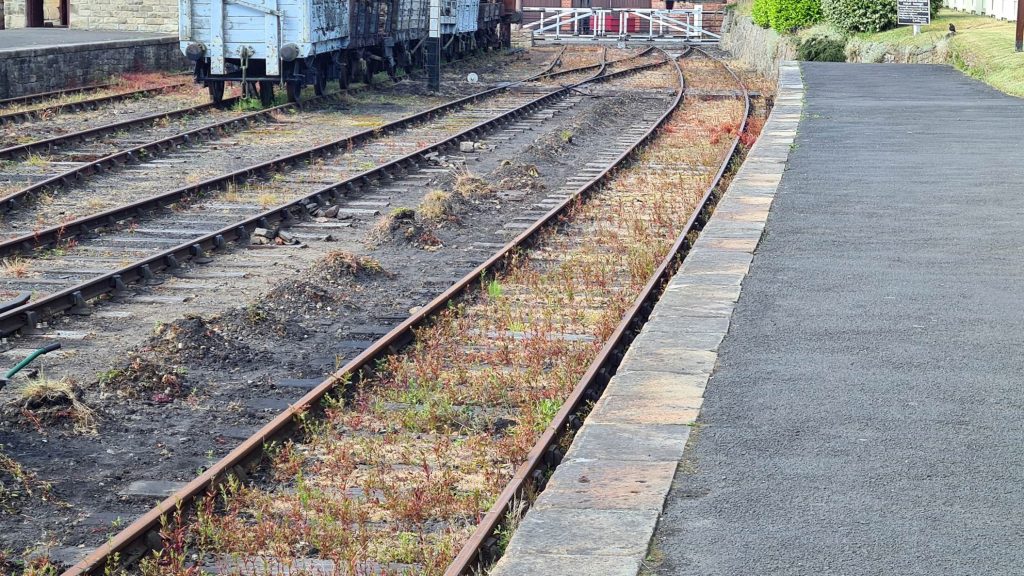 Below: The fencing to the rear of Francis Street has been completed.  This includes a gateway into the area used as the 15″ gauge station in 2019, and will also allow ash to be removed from this area too.  No.18 was in operation when Matt took these photos.

Thoughts on a bus running day…

We’ve had quite a bit of interest from visitors and enthusiasts in the historic bus operation at the museum.  This, alongside expressions of interest in riding on Crosville 716, has prompted us to consider a one-day bus event in the autumn.  We are still developing the idea and looking at staff/vehicle availability, but hope to announce a date for this in due course.  It will probably be a mix of circular tours (such as might be run by 716) and service buses.  It would also coincide with (hopefully!) some operation of the tramway too.  For more on this, watch this space…

This month’s day for operating Coffee Pot No.1 took place this Friday.  Coffee Pot No.1 was joined in operation by Peckett 1370 and Glyder.  Time was spent preparing the new viewing area in the top yard of the narrow gauge railway, in readiness for opening this to visitors and making this area of the Colliery yard accessible.

Below: The process of installing the new fence brought to the surface a lot of large debris, that would have been a hazard to visitors walking in this area.  To cure this, the stones are being raked up and loaded into a skip, giving Glyder a purpose today (and me a lot of aches and pains!!!).  Here are a couple of views of this somewhat pedestrian activity. 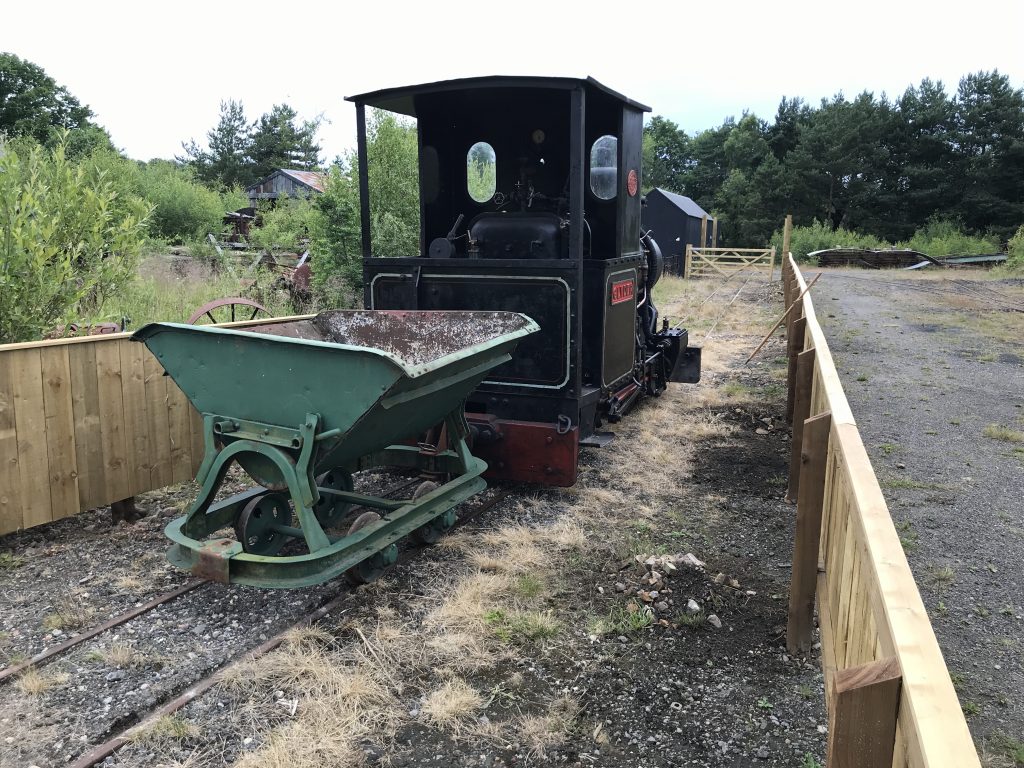 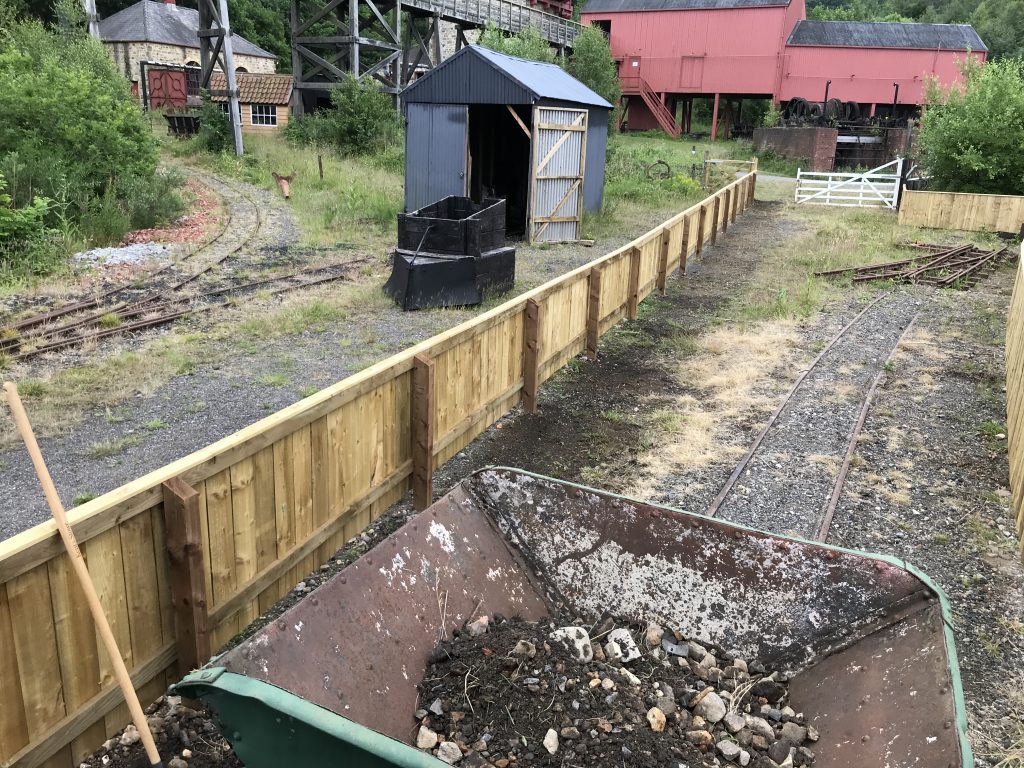 Below: Peckett 1370’s owner was enjoying a day on his engine – the weather was very warm but the sun remained elusive so the photos I took are a little dull, but this one is included to illustrate the occasion. 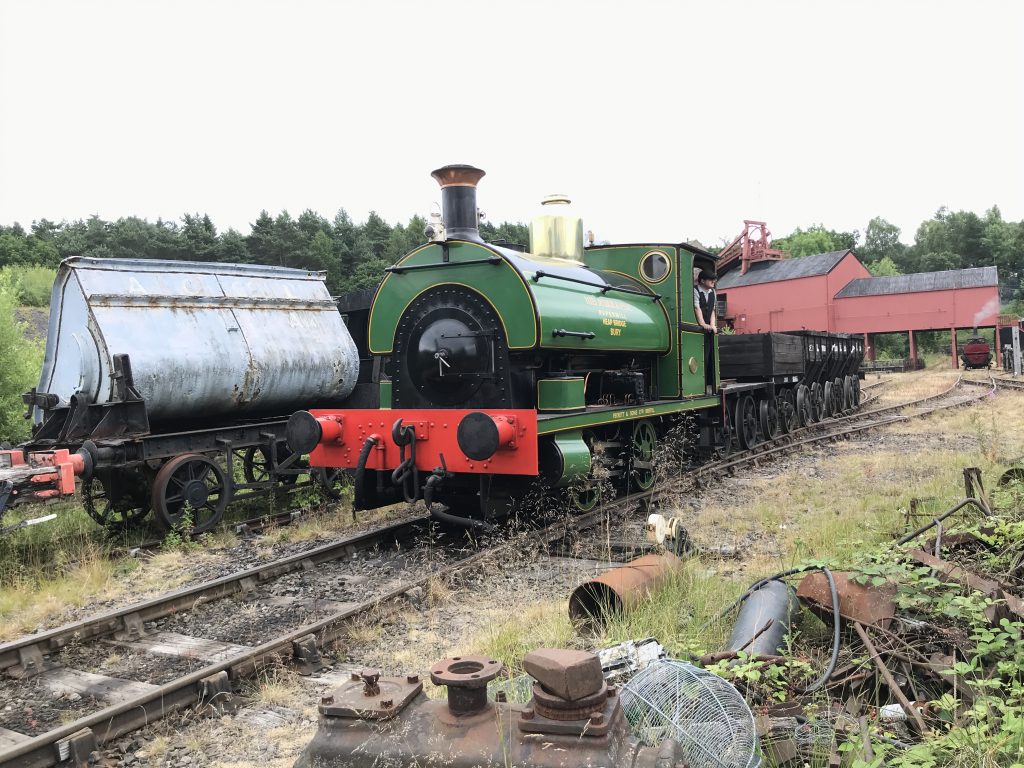 The next running day will be the 13th August.