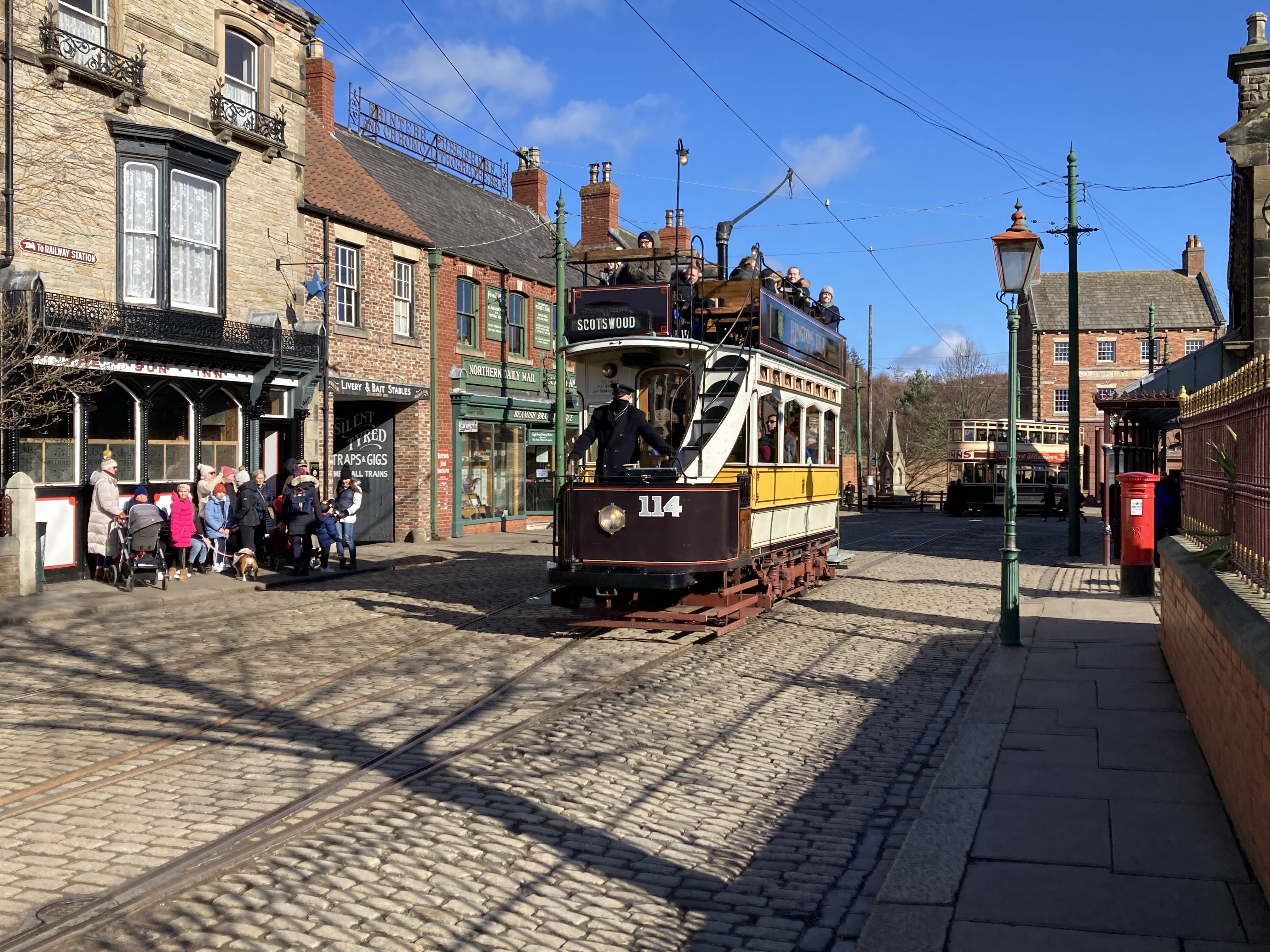 This week has been half-term at the museum, so we have been open every day and welcoming a steady stream of visitors – many coming to see the newly opened first section of 1950s street.  Meanwhile, behind the scenes we have been receiving an extensive audit of our railway safety management system, against an Office of Rail and Road document titled RM3 – a risk maturity model.  We appointed an external body to carry this out, as we do not have sufficient capacity in-house to do this in a suitably independent way within the organisation.  We await their findings, but the process has been very interesting so far, and also very stimulating – though Matt and I are aware of the inevitable work that will follow!  RM3 is an increasingly common set of initials within the heritage railway sector and we were keen to embrace the opportunity to have an independent review of our systems, knowing how close we are to them and that a degree of objectivity would be a very healthy thing!

Below: Two views of the nearly completed bus shelter roof at North Bay Railway Engineering Services.  The glass is to be cut to fit, then stored for later fitting by the manufacturer, once the roof and columns are painted and assembled at Beamish.  When you see it like this, there is quite a lot of it!  Rather more than the collection of parts that we had at the start of the project, certainly! 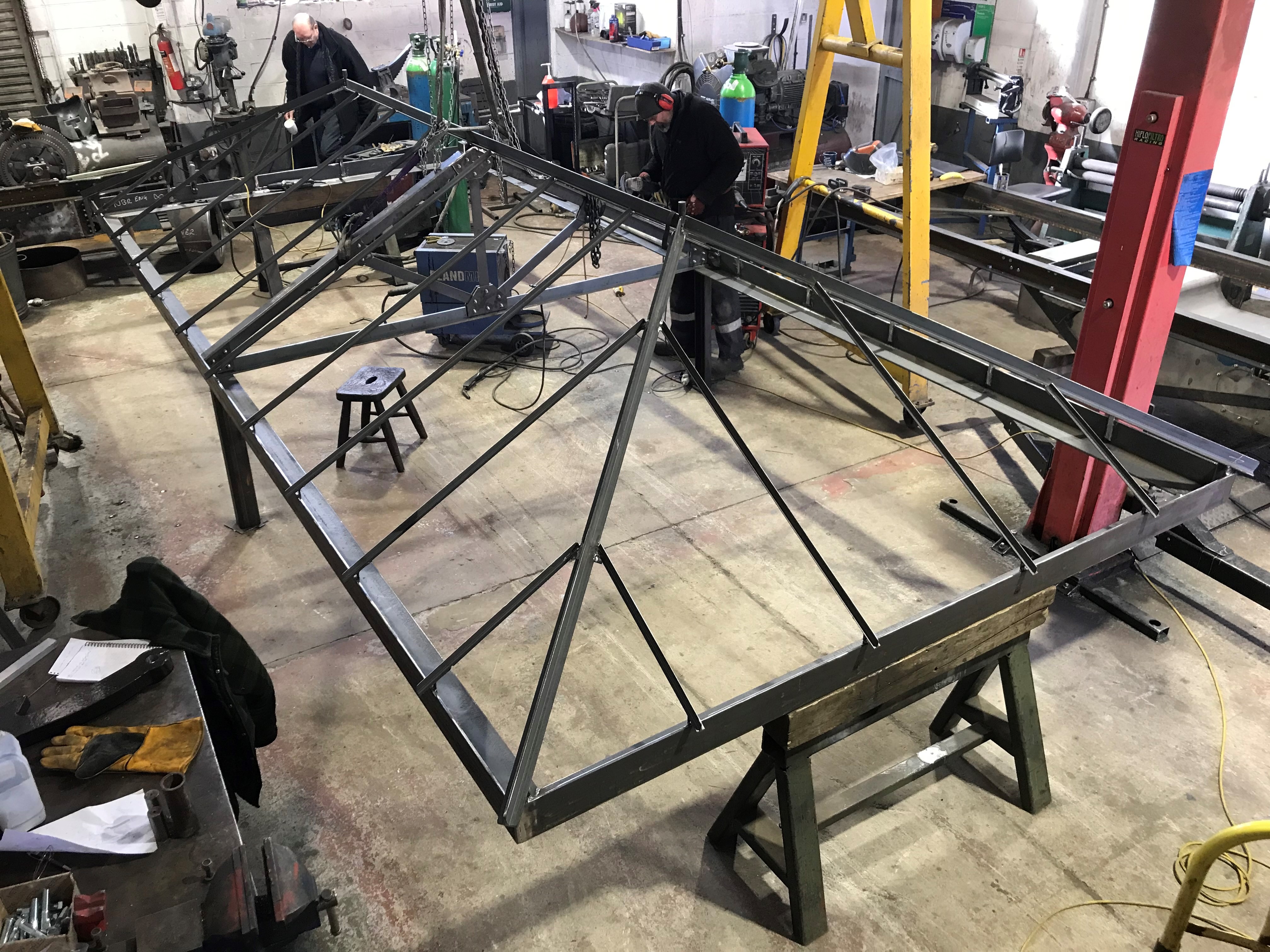 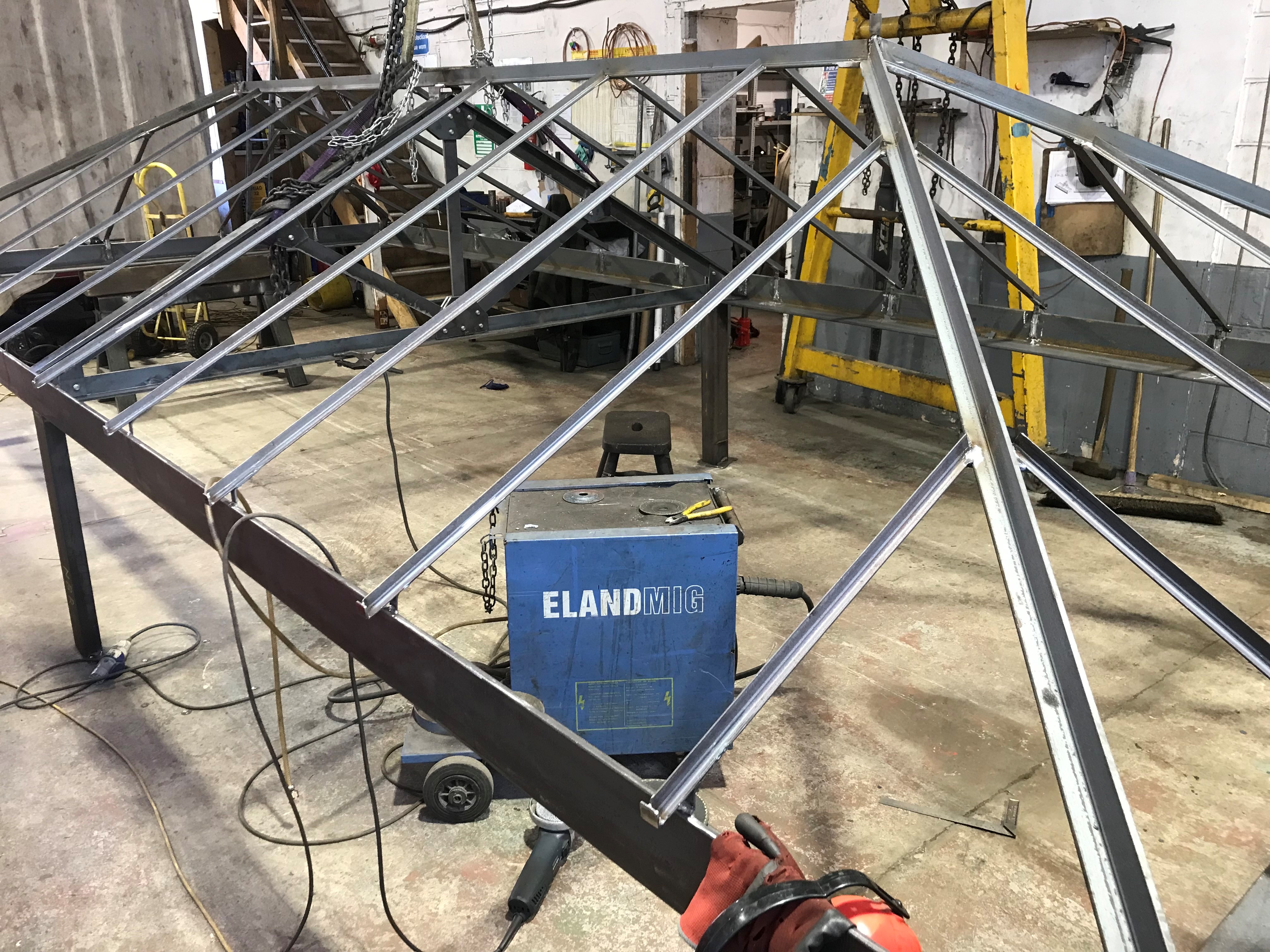 Below: The cast iron guttering, primed and ready to be painted once it is back at Beamish.  Readers will recall that this project is being supported financially by the Association for Industrial Archaeology. 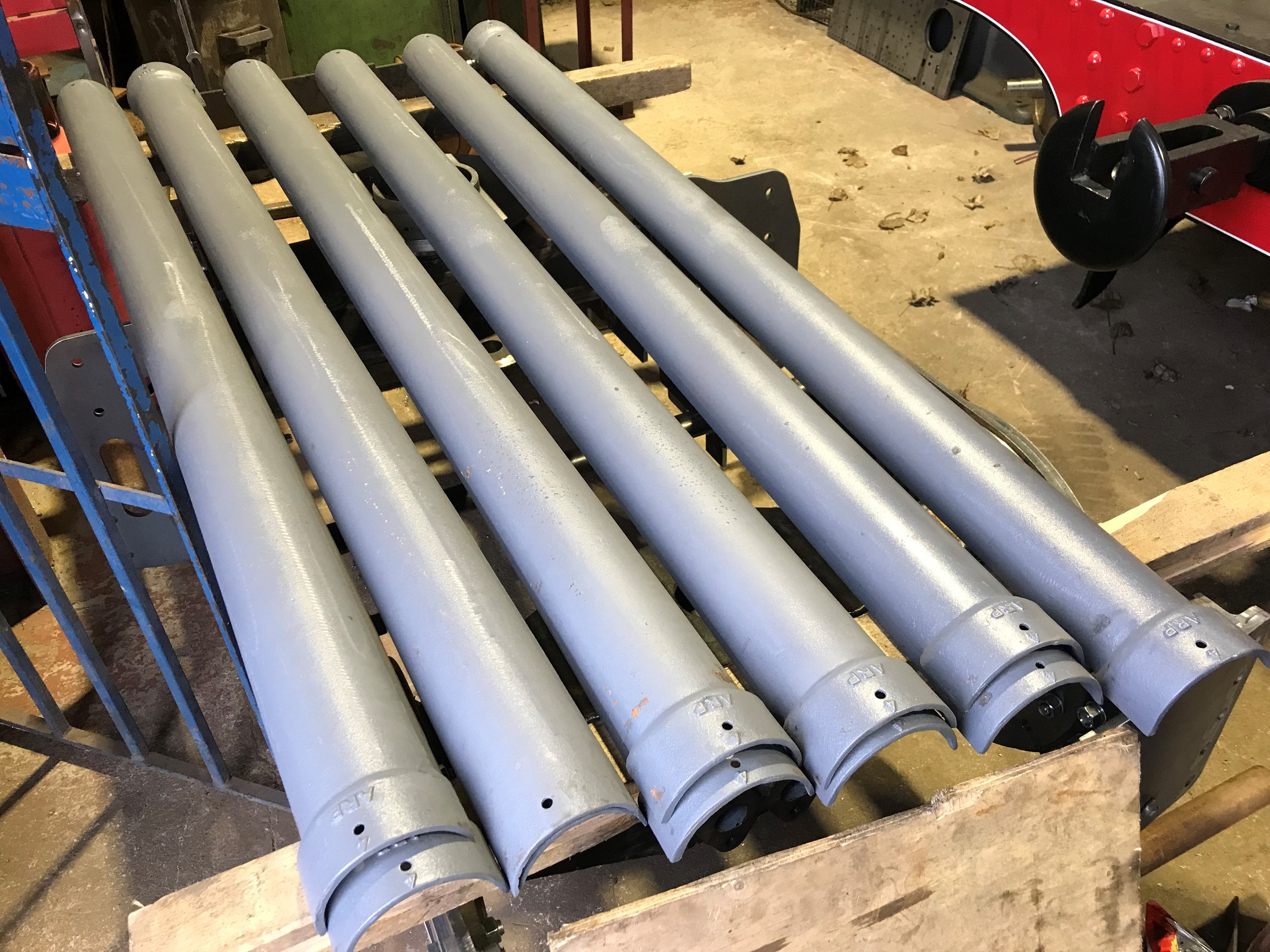 Below: A sunny (but cold and windy) half-term day, with Newcastle 114 venturing into service, its driver well-braced against the weather! 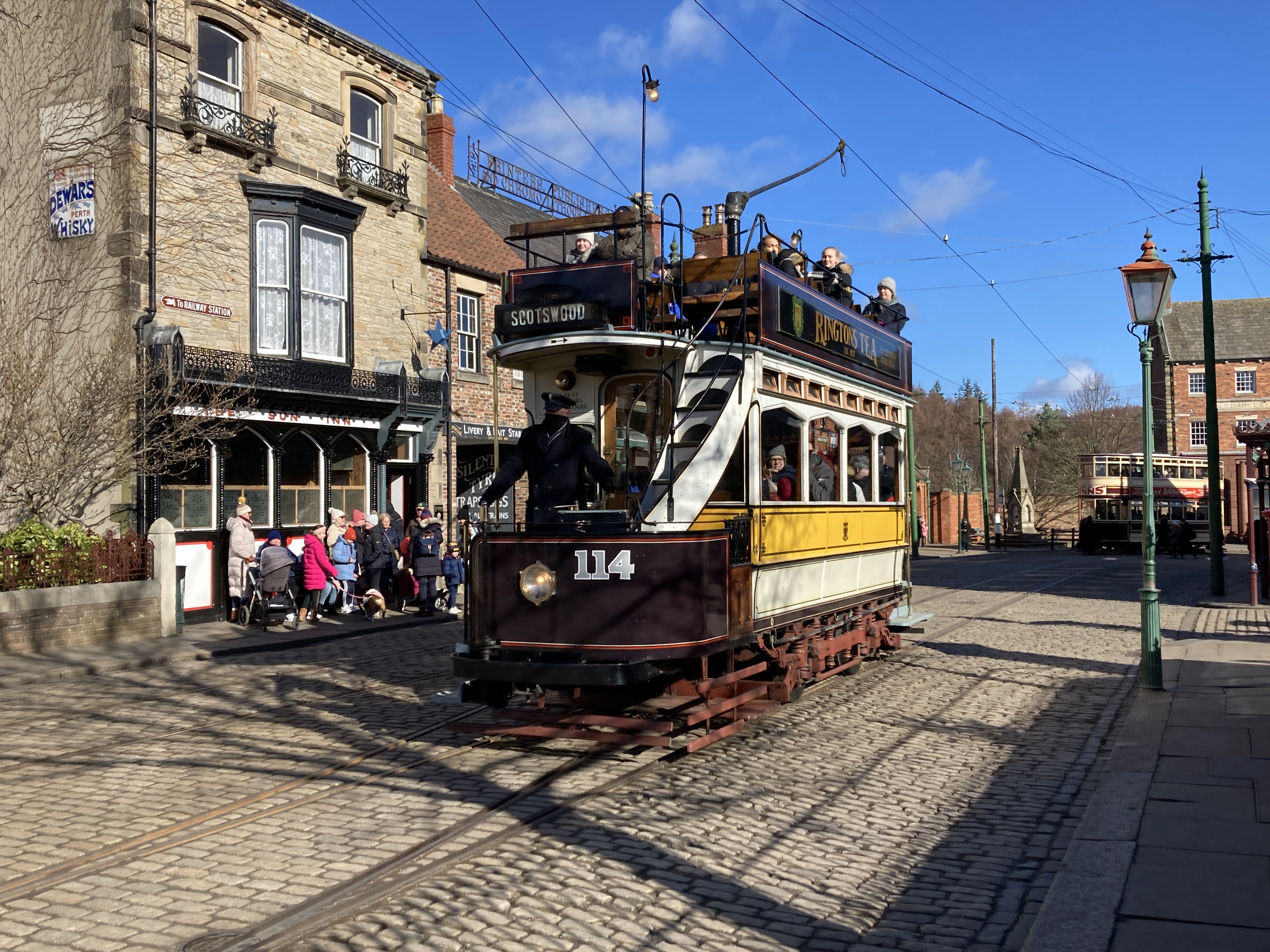 Another modification/improvement to Puffing Billy has been the fitting of drain cocks to the cylinders. Interestingly, the drawings for the loco specify “automatic drain cocks to be fitted into tapped hole”. These were never fitted. The loco is very wet in service, with the steam at 55psi very quickly condensing in the large and relatively cold cylinders. This is exacerbated when the loco has stood for a long time. Most locomotives have some sort of cylinder drain to drain condensate which can then be closed when the cylinders reach a working temperature. This feature is seen as desirable with Puffing Billy.

With any modifications to the replica locomotives, we want to hit a sweet spot where the loco is reliable and maintainable in service but without detracting from its appearance or introducing something which would be totally inappropriate. The lower cylinder covers already had tapped holes in them, so these could be used. The top side of the piston remains without a drain, as it would be almost impossible to fit one in an invisible manner, but also because its effectiveness would be close to non-existent with vertical cylinders. Any condensate on the top side of the piston would more than likely leak past the piston rings in any case.

A fitting was manufactured to reach the tapped holes in the lower cylinder covers, the “cylinders” as the loco is viewed being a cosmetic surround to match the original loco, containing the casting inside them. The pipes then pass to the inside of the frame, where there is a valve and then the pipe to direct the drains away from any bearings/motion. As can be seen, the cylinders are very close to the wheelset, so the fitting avoids this nicely. Whilst the wheelset does move slightly in the frame, the work undertaken in summer last year means that the clearances on the wheelset limit this movement such that the fittings and wheels do not foul each other.

Below:  The bottom of one of the cylinders, showing the outlet pipe.  Note too the outer jacket on the cylinder – they were manufactured so as to appear to be fashioned from lapped plate riveted together, but these sleeves are purely cosmetic.  The proximity to the wheel flange can also be seen. 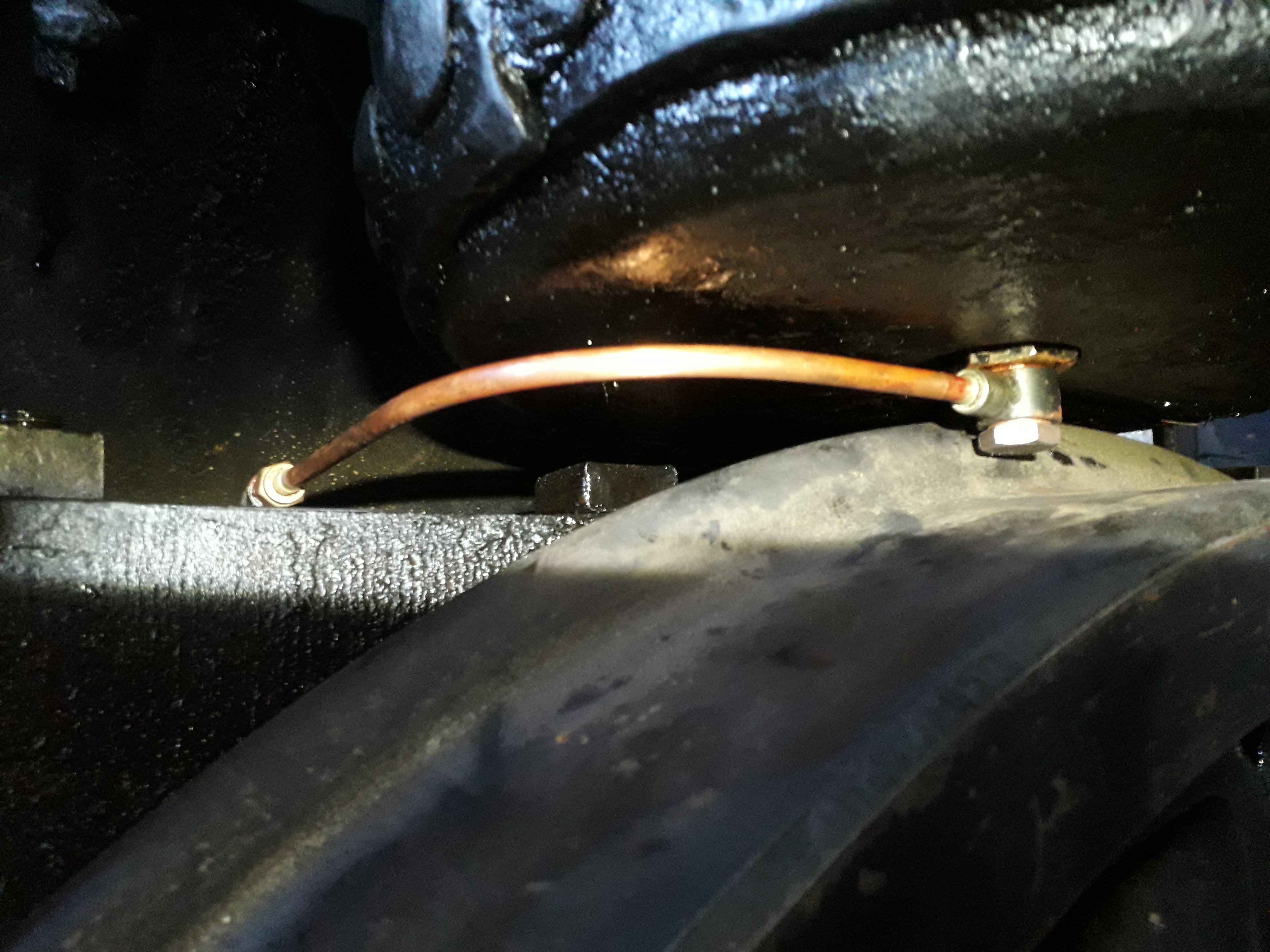 Below: The drain cock seen from below, with the drain pipe running on the rear of the timber frame.

Below: The other side of the loco sees the drain pipe take a slightly different route to the outside World. 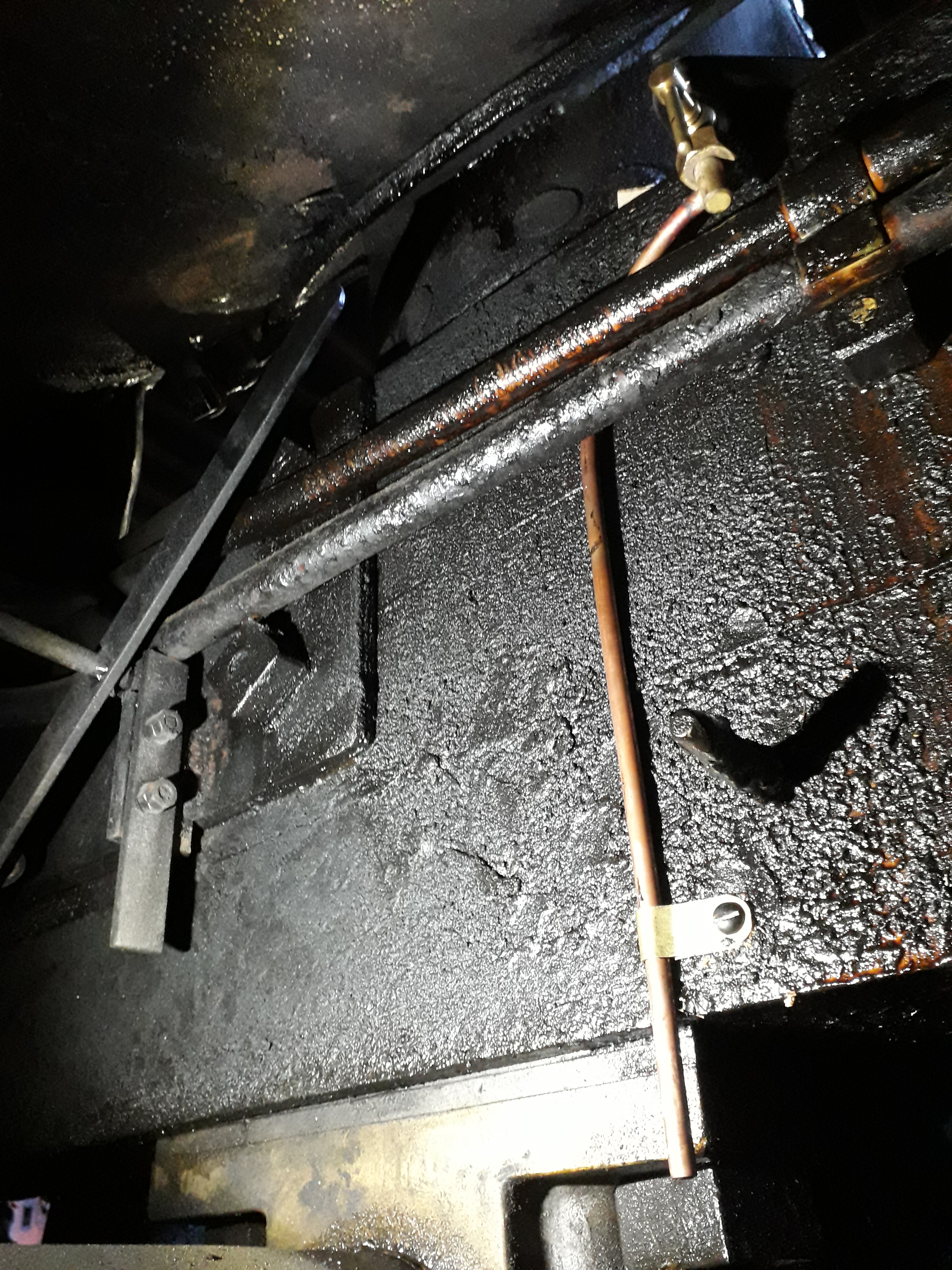 The recent strong winds have caused no end of operational challenges (and even two days of closure) at the museum.  Most of this can be attributed to structural damage and fallen/damaged trees.  However, the doors on Crosville 716 have also become victims to the strong and near-constant winds lately, the wind being sufficiently powerful to overcome the door catches that secure the rear doors of the bus in the open position.  To combat this, and because the hinges form a straight alignment when open, clips have been made in the fabrication shop that drop onto the open door’s hinge, and secure it in place against any interference from the wind.  Changing the hinges or catches already fitted would have been too intrusive and entailed breaking the paintwork on the bus – something we definitely want to avoid!  The clips will be painted yellow then introduced into service along with a suitable staff notice regarding their safe use. 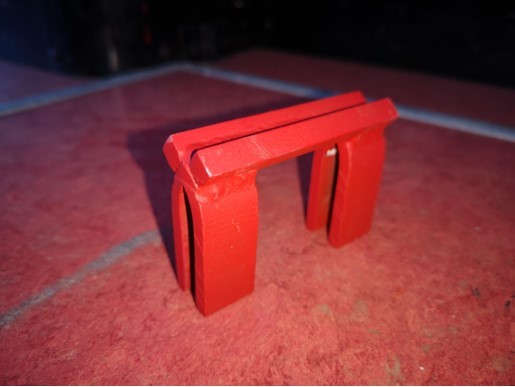 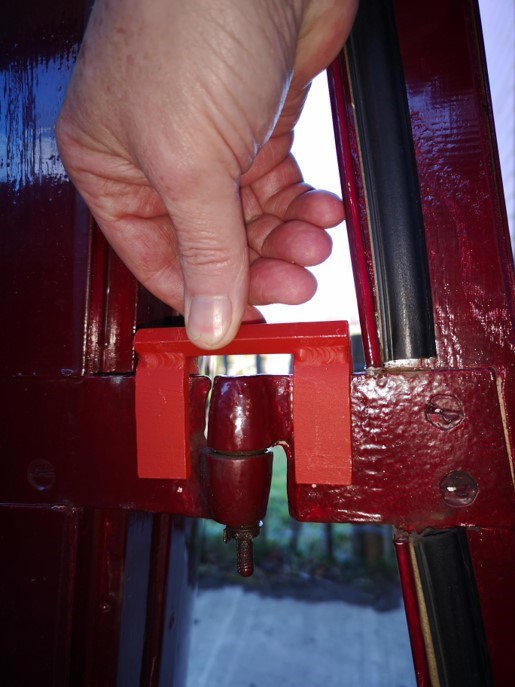