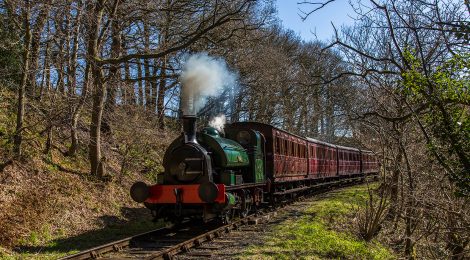 There is something of a bus theme this week! However, to provide some balance, the steam locomotives are included, whose steam tests ahead of the 2020 season have been taking place across the museum.

We start with an update on the new WAV (Wheelchair Accessible Vehicle – Crosville 716), whose restoration and adaptation is nearing completion at a local contractor’s site.

Peter Barlow, one of the long-established Beamish Tramway Group has unearthed some slides showing the little Dodge bus during its years in the hands of the VK club. Peter was one of the club’s members, alongside Les Brunton (another stalwart of the Beamish Tramway Group), long before the idea of the bus becoming part of Beamish’s collection was explored.

All images copyright Peter Barlow and reproduced here with his permission.

We are very pleased to confirm the first visiting locomotive for the Great North Steam Fair (April 2 – 5). More are to follow this announcement, along with some news on the theme of the road steam at this year’s event…

The locomotive in question is standard gauge (its been a while since we’ve had a short-term standard gauge visiting locomotive), and it will be based in the Colliery. Thanks to the cooperation of the Tanfield Railway we will be operating 1911 built 0-4-0ST Keighley Gas Works No.2 throughout the steam fair. This is a new locomotive to us, being very similar to the Tanfield’s Sir Cecil Cochrane that visited us during the first year of the revitalised Rowley Station in August 2010.

We are very grateful to the trustees and volunteers at Tanfield for making this loan possible, and look forward to welcoming No.2 to Beamish next month.