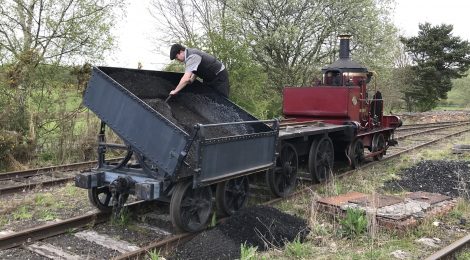 There is quite a bit of news this week, so I’ll break it down into a sequence of posts, starting with a quick look at last week’s running day with Coffee Pot No.1 and progress on Gateshead 10’s now extensive mechanical overhaul.

Below: The day was quiet so the time with No.1 in steam was put to good use to carry out some housekeeping around the railway.  Here Matt is emptying the ash from the Hodbarrow side tipper.  This isn’t railway ash, but that generated by the cottages in Francis Street and ‘helpfully’ thrown over the fence for us to remove.  A JCB makes loading of the tipper fairly quick work however. 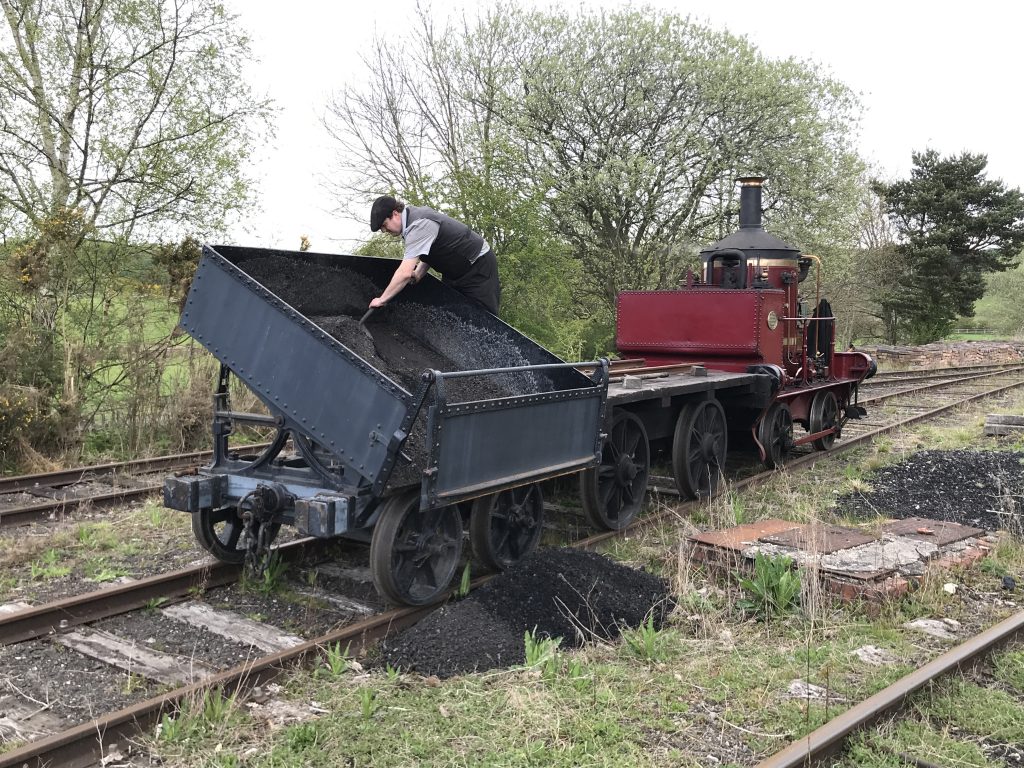 Below: Dave young was able to reaquaint himself with Samson, after a gap of over a 18 months. 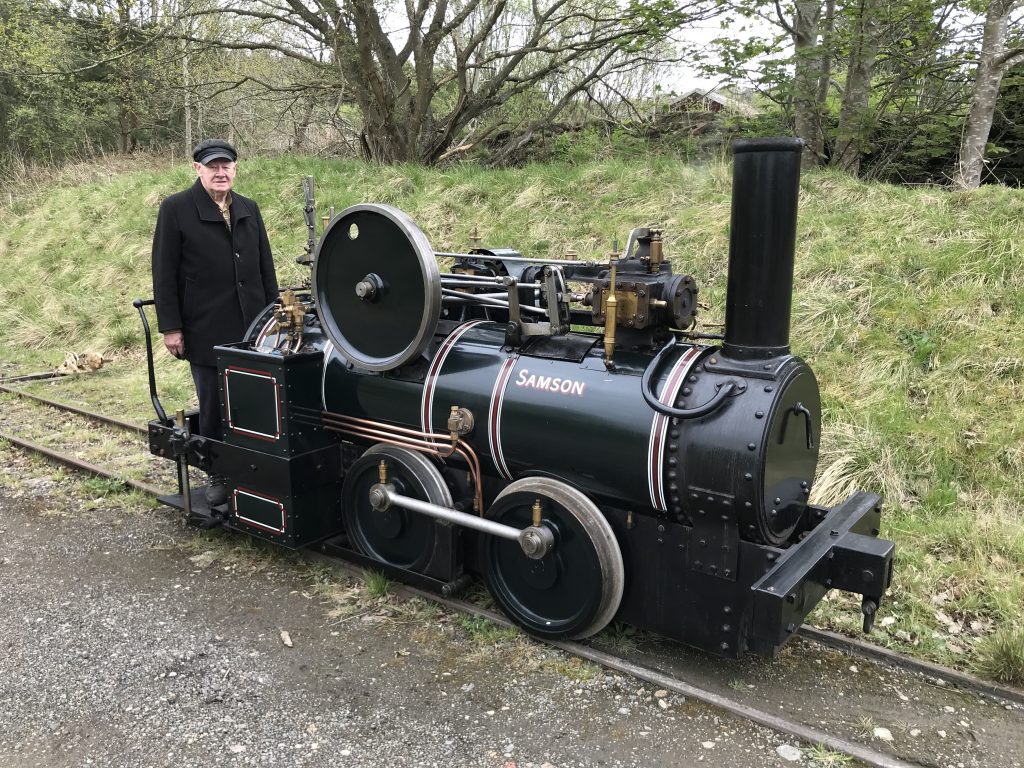 Below: Samson’s new cast iron bufferbeam has worked well, more or less eliminating the oscillation of the locomotive when running, and with a useful centre buffer for coupling to the variety of stock we operate.  This also brings it closer to the original design on the 1874 original. 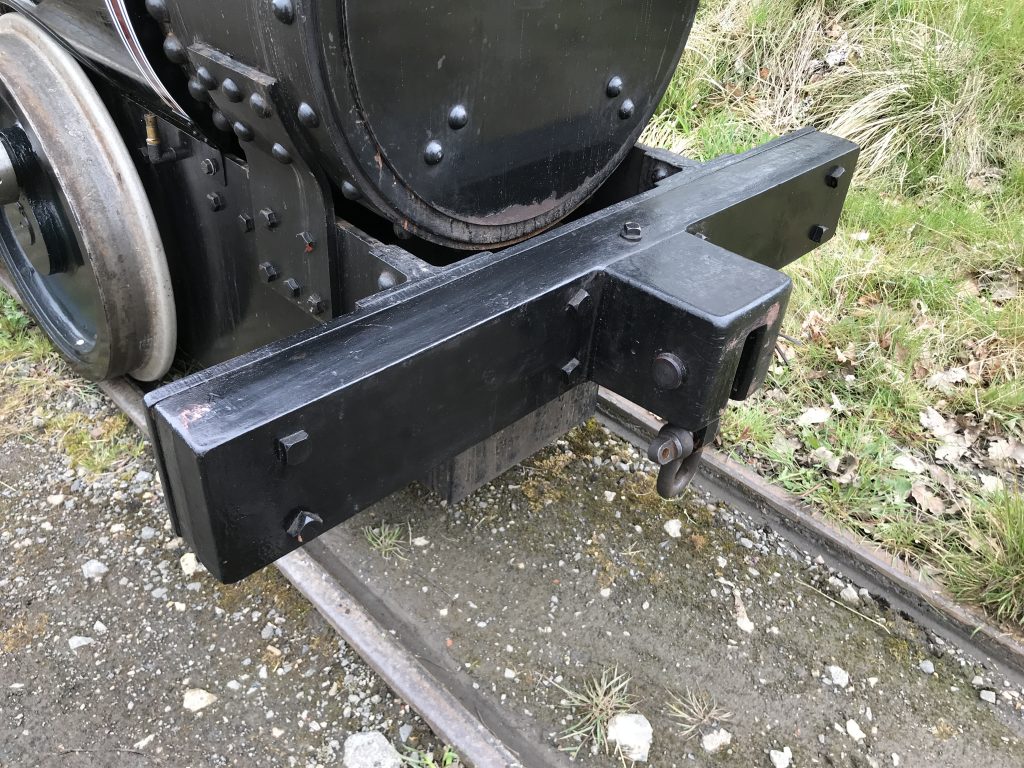 Below: Glyder was also steamed, to enable it to move to the inspection pit (shunting it up there cold would be more than Samson would be able to manage).  Uncleaned and simmering away, it does look very workmanlike here! 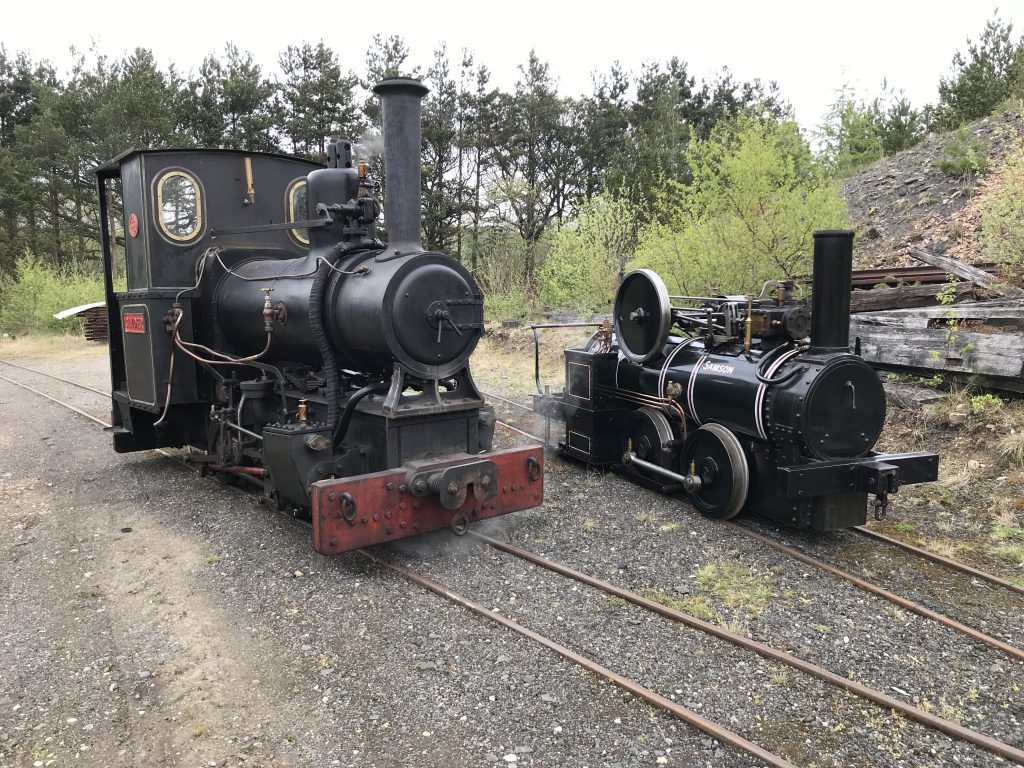 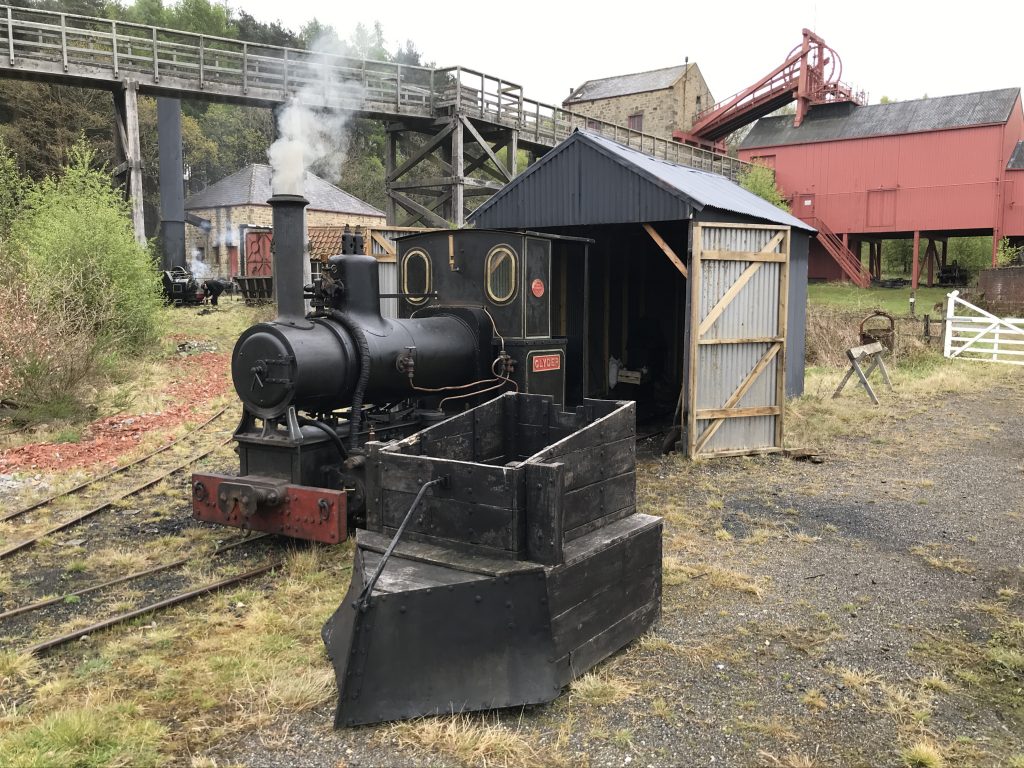 The next runnign day for Coffee Pot No.1 is the 11th June, whilst No.18 is in operation every weekend.

With a limited resumption of work for part of the engineering team, we are now looking at our very-much revised programme of work for 2021/22.  We are currently prioritising an upgrade of the machine shop, as the first step in a number of workshop area improvements.  This is partly to improve the working environment for the engineering team (in particular as we now have two staff based there, whose permanent workplace it is – no longer a space for use by anyone and everyone!) and also to arrange the shop to make best use of the tools that we have available.  One day I hope that we can expand the machine shop to include a working area large enough for tram trucks/locomotives to be worked on, but for now a very good tidy, sort and some re-wiring/new lighting is underway.

Their priority is then to progress Gateshead 10’s mechanical overhaul, which has stalled (for obvious reasons).  This tramcar is essential to our recovery in coming years, as it will be needed in service to cover the withdrawal for a similar overhaul of Oporto 196, and mechanical overhauls needed on the rest of the fleet as they come due.  We no longer have the capacity or capability in-house to carry out the overhaul of 10’s body, so will consider this concurrently with the mechanical overhaul, as it may need to be a contract job.

The next priority will be the mechanical overhaul of Steam Elephant, which is required by late 2022 in order to replace Puffing Billy at the Waggonway (which in turn will then be overhauled).  The apprentice project, Kerr Stuart 721, will carry on as a side-job, with some volunteer input where possible.

At some point I will discuss the future transport operations, rolling stock requirements and workshop support of these, but we are some way off this and the work that we had lined up in 2019/2020 will have to be re-examined as we will only be able to do some of that programme, and we need to focus on the core operations in the next few years.  We also have to consider succession planning and what situation we will find ourselves in, in three to five years.  Ideally we would be recruiting apprentices now, but in the straightened times of a pandemic, funding such roles will be a considerable challenge.  We can only hope that people will return to museums and heritage attractions this year (they aren’t yet, not in any numbers) in order to bring in the all-vital income that we (and others) so rely on…  Please do support organisations like us, even if not Beamish, but your local museum or heritage railway – the headlines around Culture Recovery Funding or successful public appeals really only scratch the surface of the enormous challenge our organisations all face, and the lost year+ of momentum.

Matt Ellis, Keeper of Transport (and who directly manages the engineering team) adds:

Work has recommenced on Gateshead 10, which as long term readers will know is undergoing heavy overhaul. Often we hear in preservation circles or read on forums phrases such as “it just needs a truck overhaul” . In this case, the truck overhaul required is extensive. Remember, the trucks under this tram are as a minimum third hand to us. Evidence on these trucks and Gateshead 5 at Crich would indicate that they had a very hard service life, with some ad-hoc repairs prior to preservation [it is possible they were second-hand to Gateshead, then significantly altered by British Railways for use on the Grimsby & Immingham Electric Railway – PJ]. These are hard to trace and require a certain amount of detective work to provide answers for some of the issues we are discovering on the trucks today.

Below: Trial assembly of the wheelsets and axleboxes within the bogie frames. 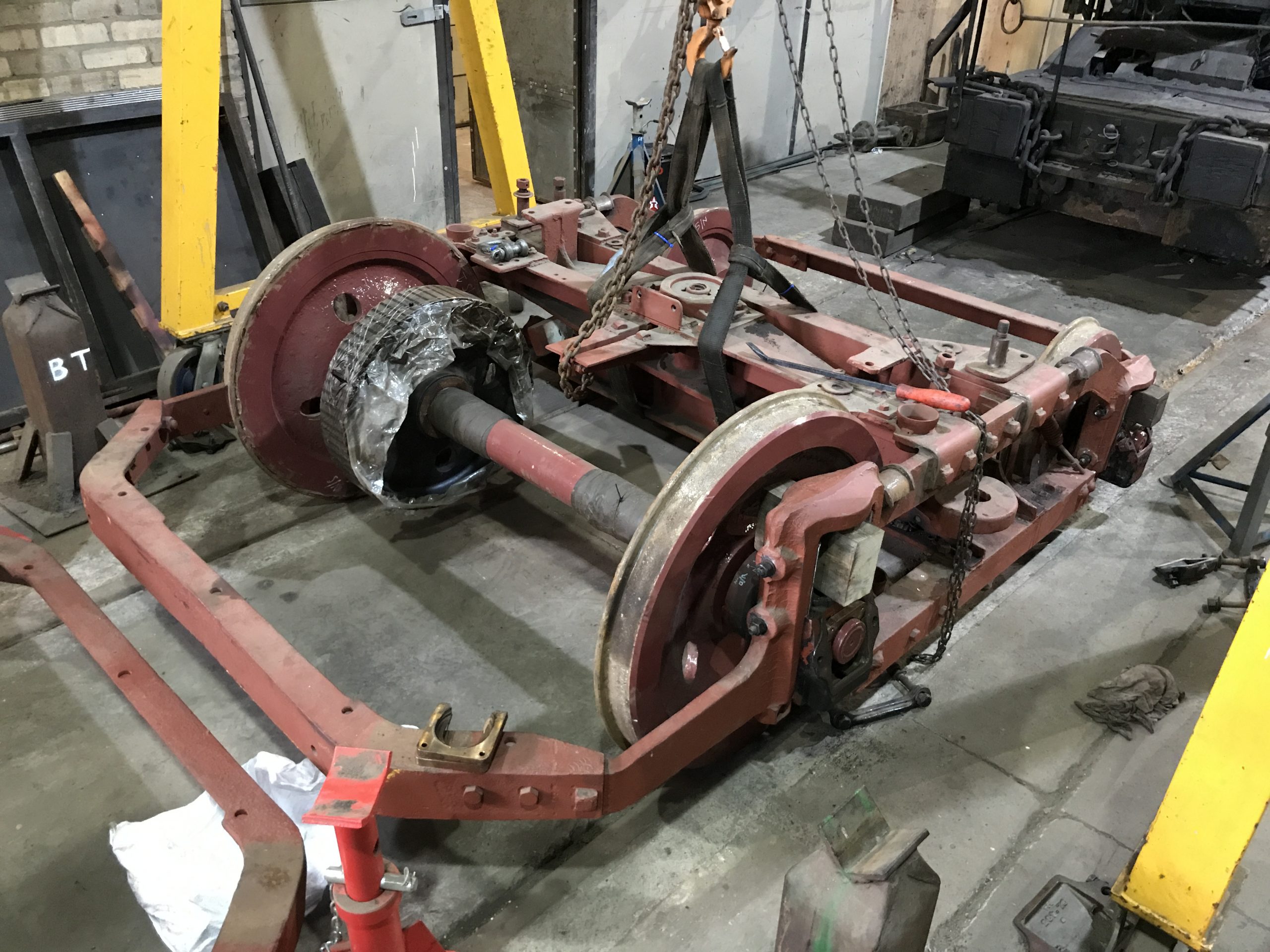 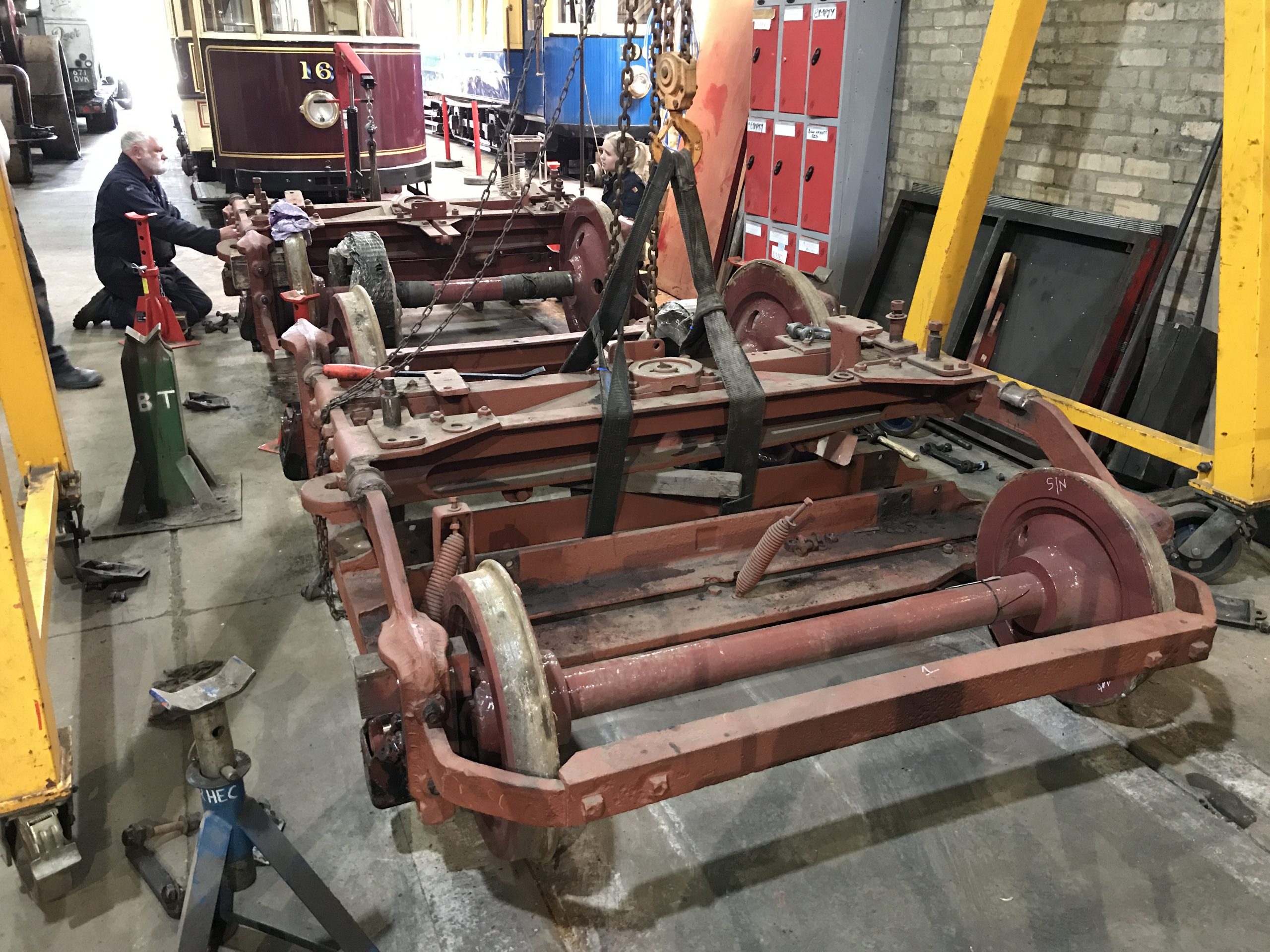 Admittedly there have been delays to Gateshead 10’s overhaul and work on it has frequently been knocked back by other more pressing needs. However, a lot of work has already been done mainly on individual components. An example of this work is this pallet of components which has recently returned from Railway Brake Services. This contains the air brake cylinder, driver brake valves, air system safety valve and brake system emergency valve. All these components have been overhauled and now await the reassembly of Gateshead 10, before testing.

The work on the trucks will now be picked up by Don and Zoe, our machine shop team,  this is due to the volume of component re-work and manufacture that is required for this overhaul. The photo below shows the progress that Don and Zoe have made on the trucks this week, with both trucks wheeled. Don’t get too excited at this sight, in what will be a long journey to completion, this can be seen as merely putting the key in the ignition. The trucks are wheeled for assessment and measuring of axle box clearances prior to dismantling once again to carry out the required remedial work required on the axle boxes and horn faces. The work to these will likely include building up of the horn faces and/or the axle box faces, followed by machining to size to provide running clearances. 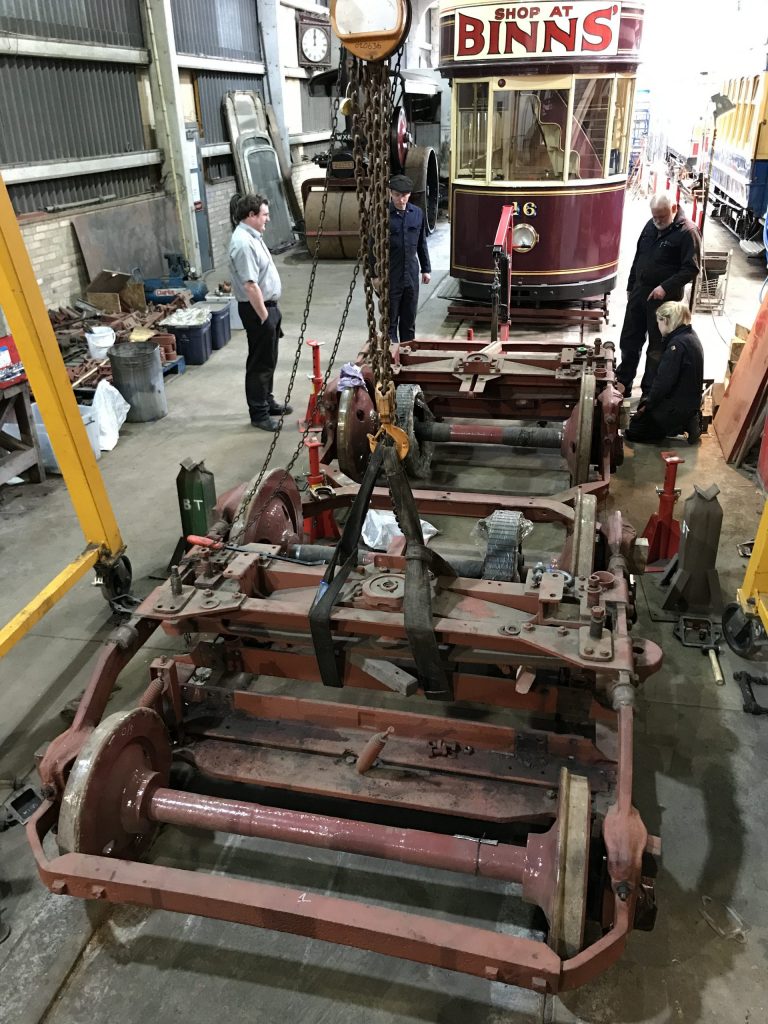 As the work progresses we will of course keep a record of it through the blog for readers to enjoy. There is an order of works which will see each main set of components (Wheelsets, Motors, Track Brake Gear, Tread Brake Gear, Bolster suspension) all worked on in turn. Each of these stages can be further broken down into trial assembly, measuring, component re-work/manufacture, proof assembly, dismantle & paint final assembly. Add to that that some of these assemblies have many individual components, then you get an idea of the work ahead.

Below: Here the horn faces are seen bolted into the frame casting, with the axlebox below.  This slides up and down, guided by these faces, so a high-degree of precision in aligning these parts is required in order that they can move freely.  A coil spring sits on top of the axlebox, and locates into the underside of the truck frame at the top of this view. 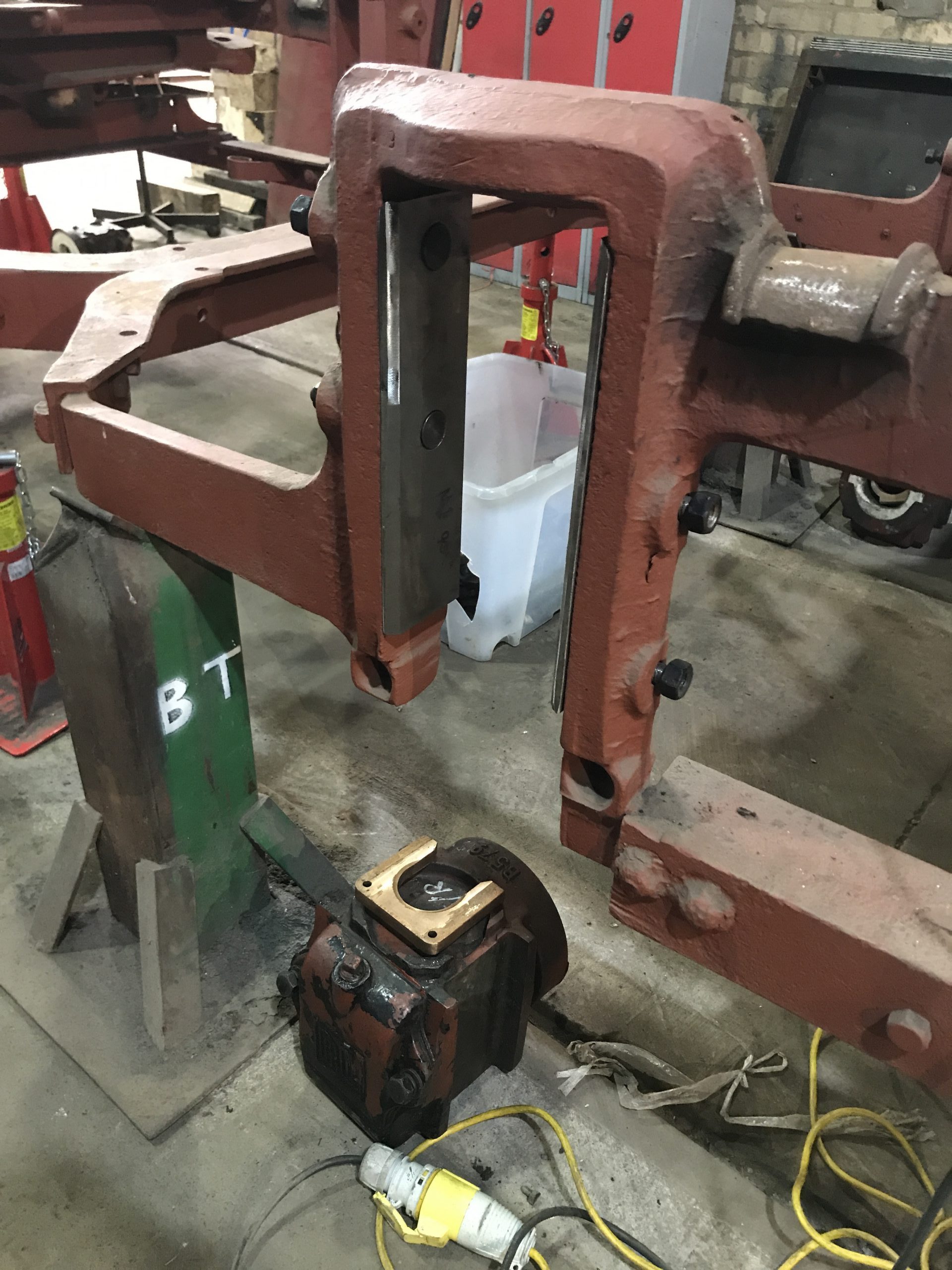 We haven’t set a timescale for the work as it is impossible at the moment to know where we will be in coming months (in particular if there are further lockdown restrictions), but the completion of the two bogies is now the first target, with the re-mounting of the body onto the bogies, completion of the air braking system overhaul and electrical refurbishment to follow. We aim to test 10 in this guise, before turning to the body and, finally, repaint.  We have been fortunate with this work in that much of the engineering is labour at present, so costs can be contained.  Most of the material and contract costs in this phase were accrued in 2019/2019 so we have plenty of components to work with and prepare for installation onto the bogie frames.

Below: The No.2 end bogie, with wheelsets and axleboxes in position and the overhead crane unloading the weight of the frame.

Below: There will be a lot of lifting and lowering in order to establish the machining programme for the axleboxes.  As Matt mentioned, there is a lot of work to do on these bogies, and quite a lot that wasn’t anticipated at the start of the week!

Once we are in a position to bring further staff back from furlough, we will make a start on the tramcar commissioning (September is the target for having the first tramcar available to offer rides, though this is dependant on the national picture as well as track and overhead line inspections/works, the former only having just recommenced in May and with a short week for the two staff who carry out work on the track at Beamish).