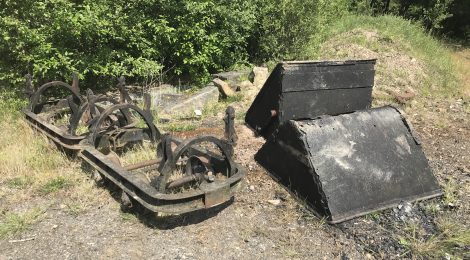 Below: A few years ago we were put in contact with a member of staff working at Foxton Locks (owned and operated by the Canal & River Trust, CRT) who was looking to find a new home for two narrow gauge skip wagons that were located on site there.  As the wagons presented a danger (due to deterioration and being a tempting climbing frame for visitors) the site managers were keen to remove them to a suitable home.  The wagons themselves were actually owned by the Foxton Inclined Plane Trust, who operate a museum at the site and whose website is worth exploring for the history of the inclined plain that was constructed to bypass the famous flight of locks at this location on the Grand Union Canal in Leicestershire.  https://www.fipt.org.uk/boilerhouse

Following a lot of delay, due in the most part to the Coronavirus pandemic, we finally were able to make arrangements to collect the two skip wagons last Sunday (20th June) and remove them to Beamish.  A team of staff and volunteers met on site, as an outreach ‘BINGE’ exercise, and in the hope that we would have sufficient manpower to remove the wagons safely.  In the end we were somewhat over-resourced, but this made the loading all the easier and by Monday 21st the skips were safely located in the Colliery at Beamish.

Here are the two skip wagons (I’m using a single ‘g’ for these, being later examples of the waggon type) at Foxton. 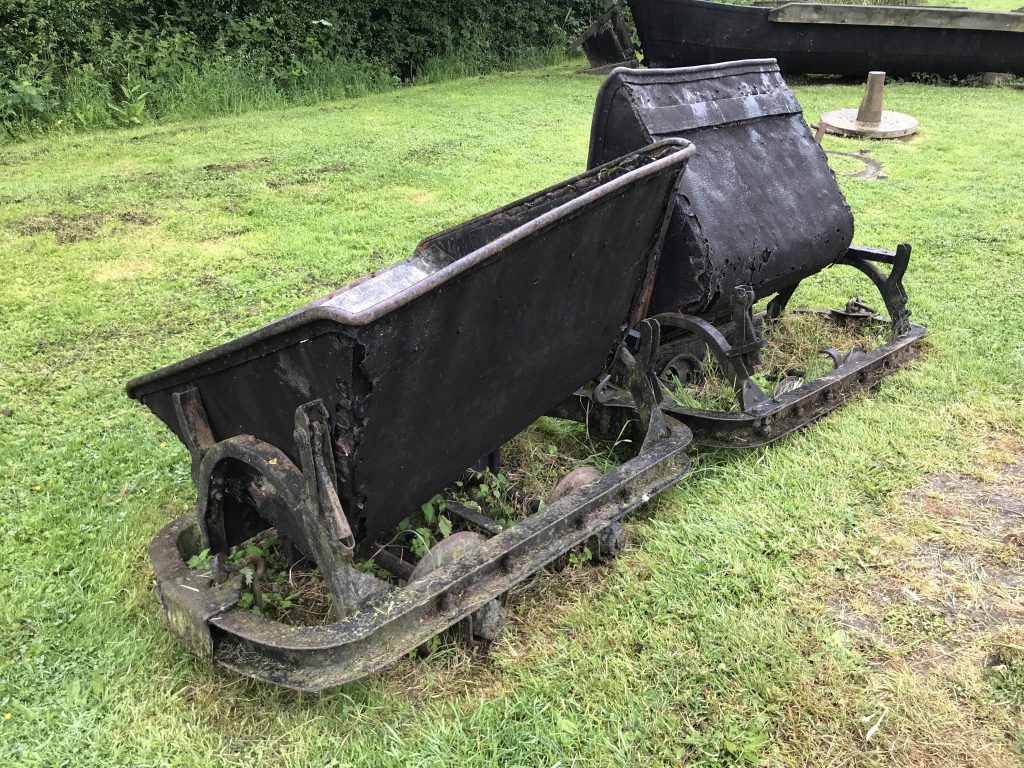 Below: The adjacent plaque, which describes an element of the construction project to build the lift at Foxton.  A number of wagons actually used on site are preserved as part of the museum display (seen in the following image).  The wagons that we have collected were not used on site at Foxton. 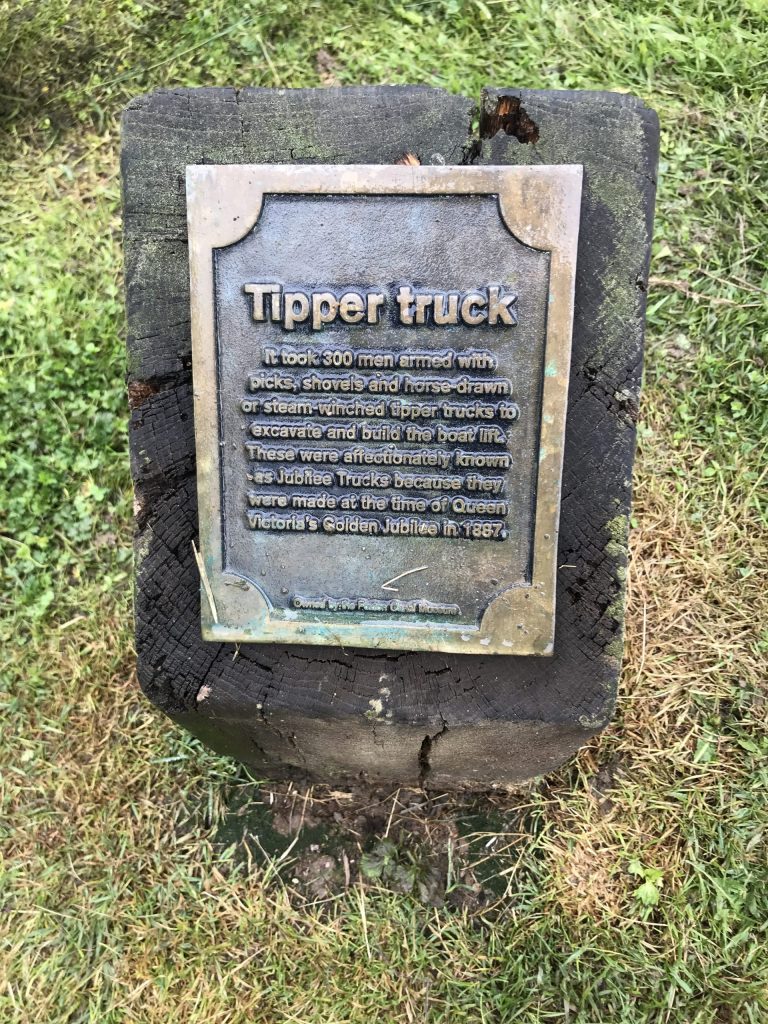 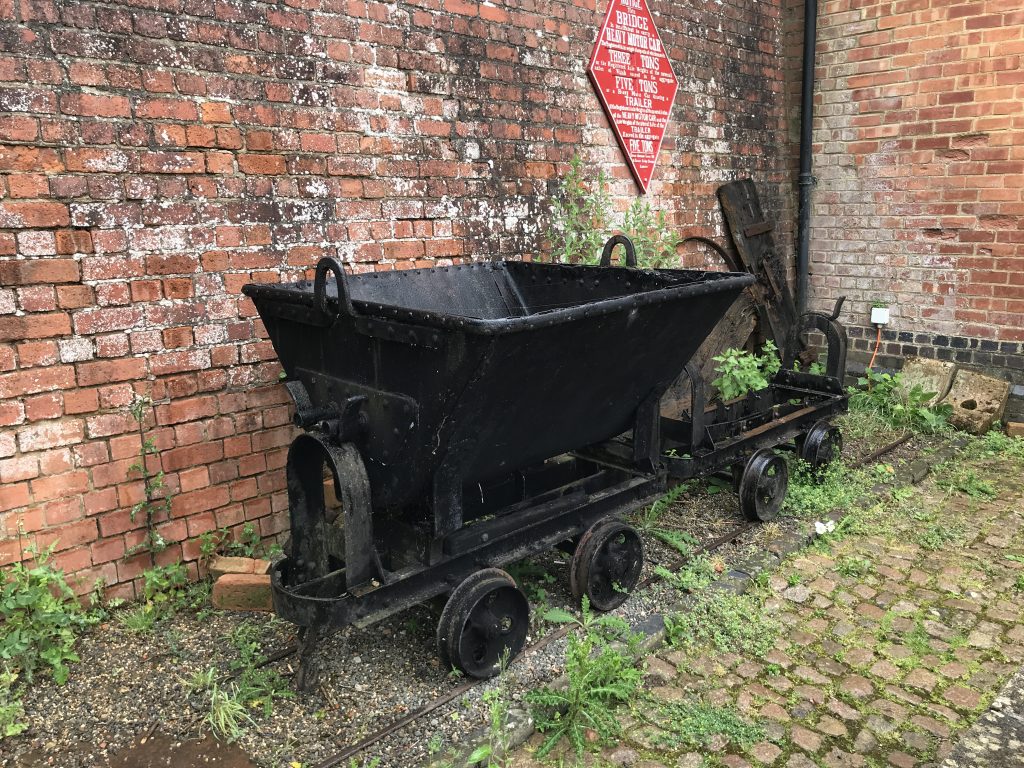 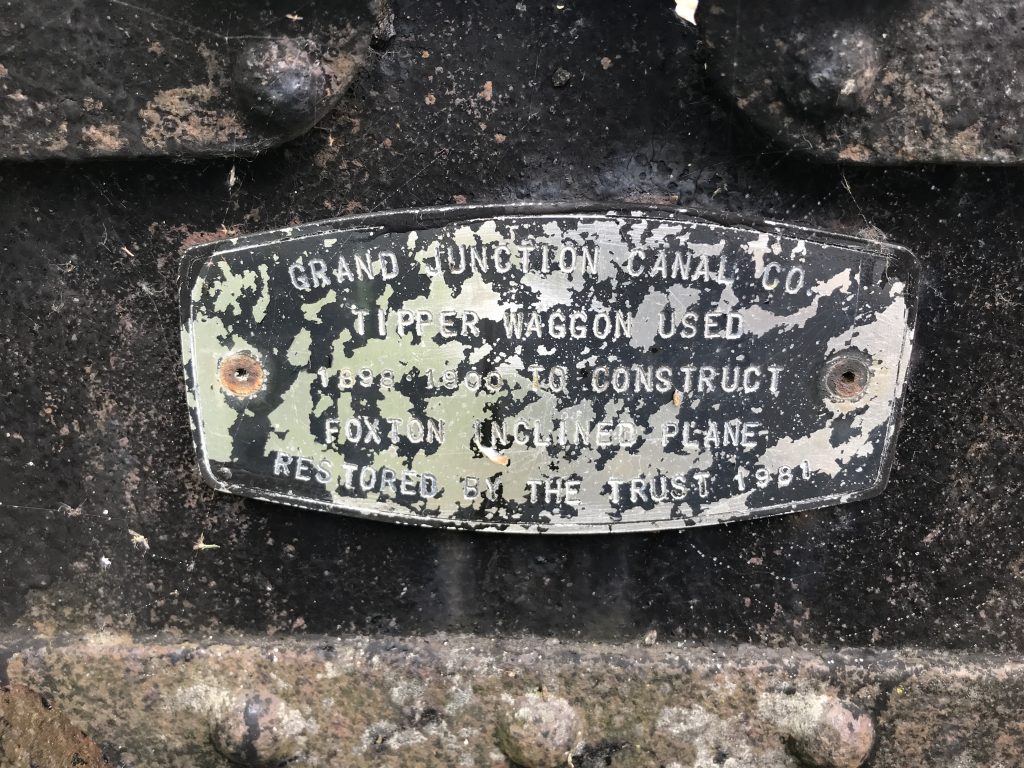 Below: Many hands make light work, as BINGE volunteers Paul and Chris swing into action and load one of the demounted skip bodies into the van. 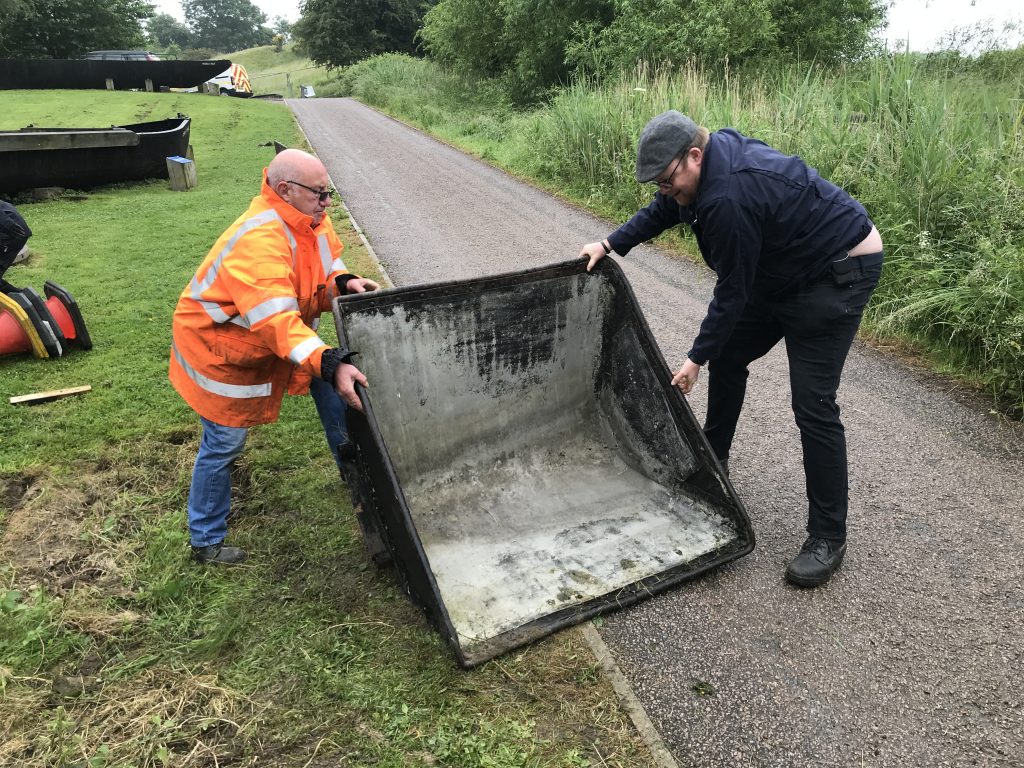 Below: The wagons at Beamish.  They are not actually two-foot gauge, being 20 inch gauge.  Our plan is to narrow this further, and use them to carry ash on the 15 inch gauge siding behind the cottages at Francis Street, largely an attempt to prevent ash being tipped against the fence (and rotting it from the bottom).  We will need to make tipping clamps, in order to prevent them overturning on the narrower gauge (or we could add another rail to allow them to run on 20 inch gauge I suppose!). 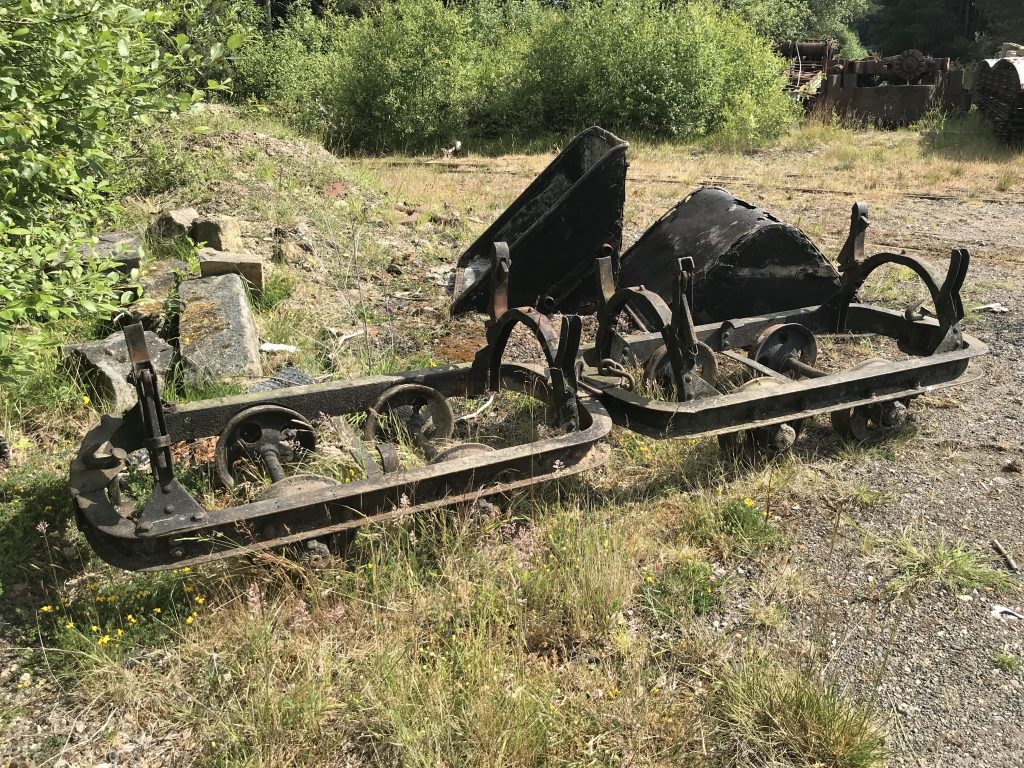 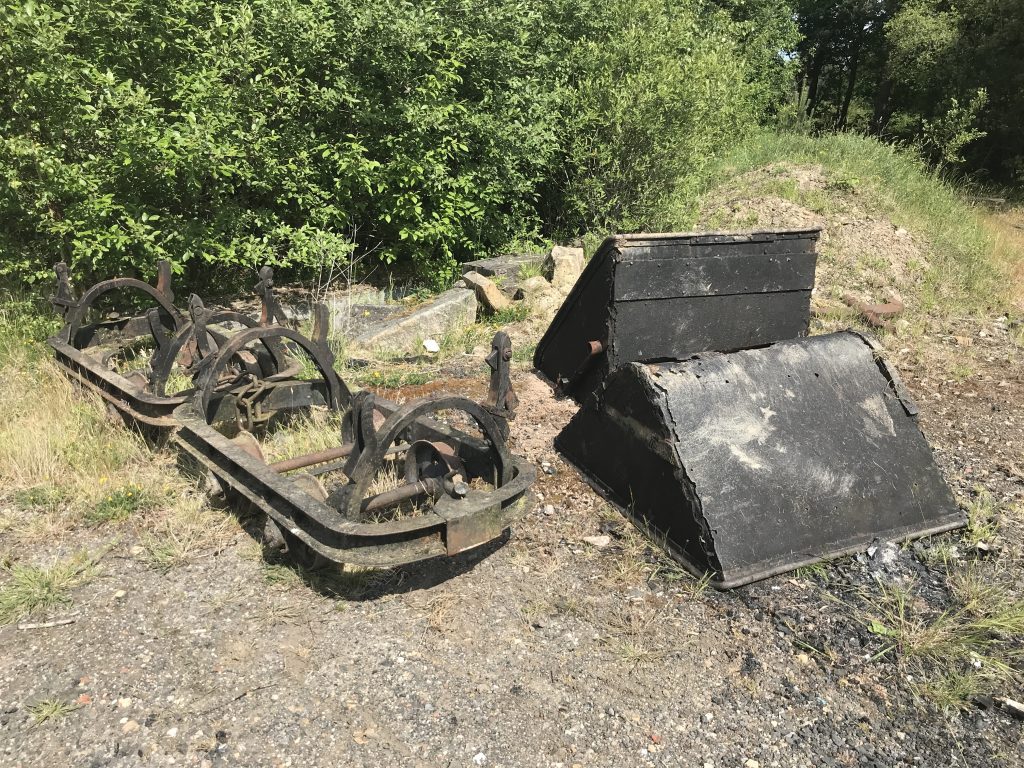 Below: The plate affixed to one of the bodies makes clear the origins of these two wagons: 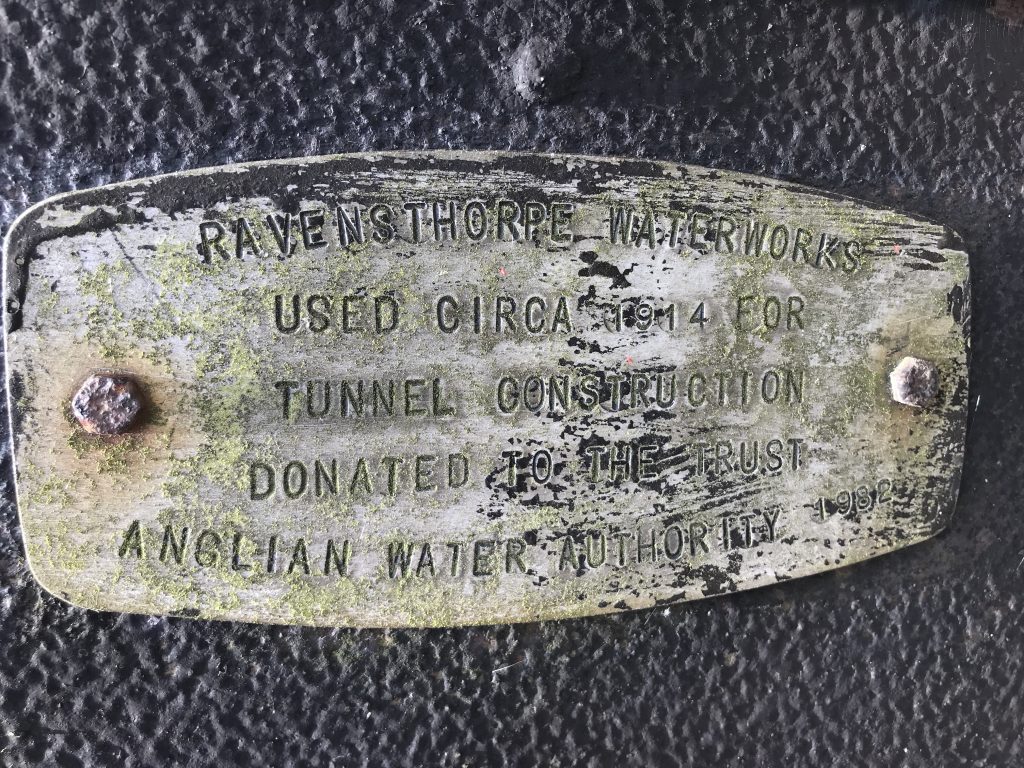 Below: The two steel bodies have extensive corrosion throughout, but someone has attempted to repair them and make them usable at some point in the past, as the lined interior reveals.  The bodies will need extensive restoration and renewal of plate, though in particular retaining the top beading and end brackets. 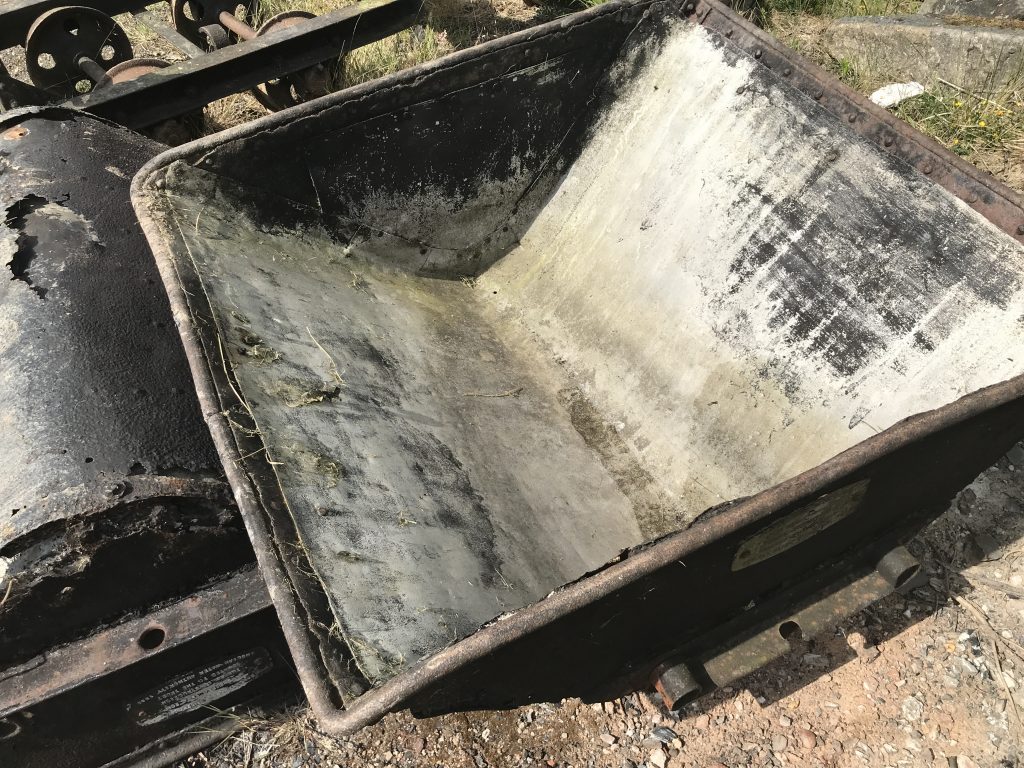 Below: We have two othe skip wagons on site, these being two-foot gauge and used on the narrow gauge railway here.  Both need restoration of their bodies, but they are serviceable and are seen here in 2013 following shot-blasting and repainting.  These originated from the Abbey Light Railway in Leeds and are believed to be of Allens (Tipton) manufacture. 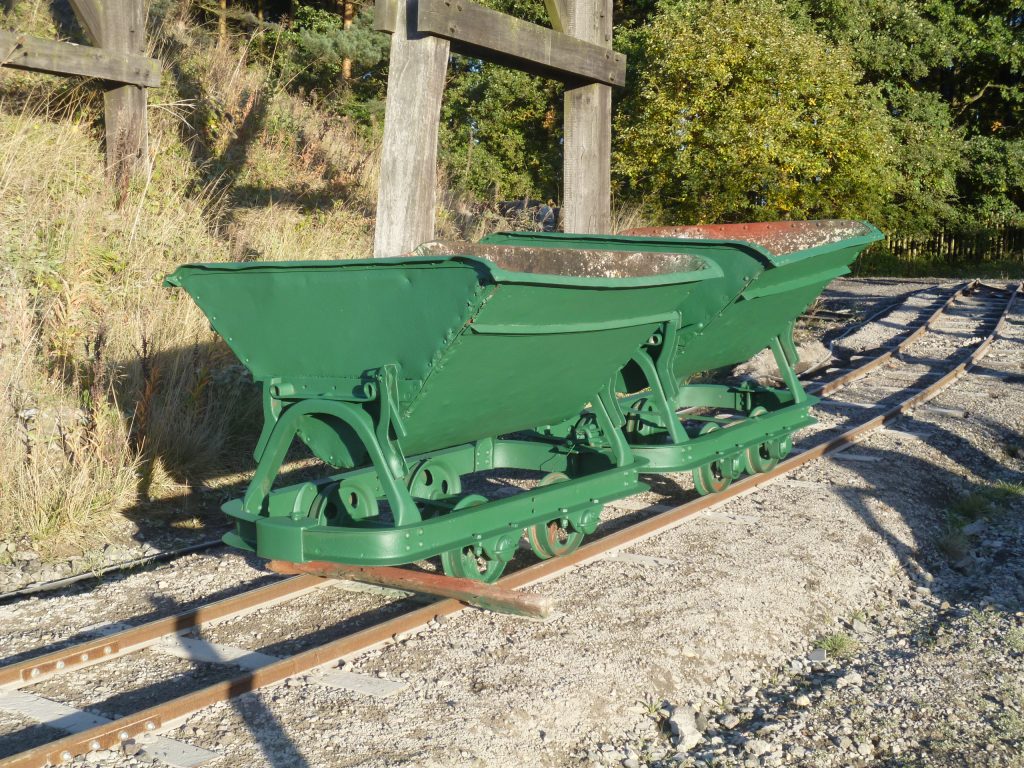 The history of skip wagons on narrow gauge railways is not widely recorded, as they were regarded very much as a means to an end, no more important than wheelbarrows or dumper trucks.  Their origins are regarded to be French and German, with the Decauville firm being a proponent of portable railways from 1875, and the Orenstein & Koppel firm following suit in 1892.  Both had military applications and were widely developed for the French and German armies.  You will often see O&K on escalator tread plates, this being another element of what became an enormous engineering entity.

In the UK, Robert Hudson Limited in Leeds was following suit.  Founded in Gildersome, Leeds, in 1865, the company developed an extensive range of iron and steel products for use in the construction and mining industry, and became particularly well-known for its portable and industrial railway equipment.  The company also had offices in South Africa, India and Egypt as part of its determination to supply the global market.

In 1875 Hudson patented the side tipping, or ‘skip’, wagon, usually known as the Victory range.  The distinctive ‘V’ shape enabled the wagon to be empted to either side, this action being either manual or triggered mechanically.  Hudosn’s designs were lighter, due to the use of innovative manufacturing processes, and the familar shape of the V-Skip soon became established, huge numbers being manufactured by the company in a variety of sizes and range of gauges.  The early designs were very similar ot the O&K examples also seen in large numbers, and others also imitated the format, in particular Allens of Tipton.  Variations on the theme produced the narrower ‘U’ shaped mine tubs that abound even today at heritage sites and even underground still.

In the 1930s, Robert Hudson introduced the Rugga range of wagons.  The skips were of a distinctive design with pressed components for the skip itself, a reversed channel frame and sealed ball bearing ‘Faro’ axleboxes.  Thousands of this design were produced and the majority of skips seen on narrow gauge railways today are of this design.

I have been keen to acquire the earlier types of skip for use at Beamish, these fitting the museum’s curatorial dates more accurately (the Rugga skips would be too modern for our purposes).  Therefore, the opportunity to add two more to the collection, in this case dating from the First World War period, was one not to be missed.

Below: An extract from the 1915 Robert Hudson Limited catalogue of Light Railway Material, showing the outside journal (axlebox) Victory skips, the range of sizes and options as well as information on the materials and features included/available. 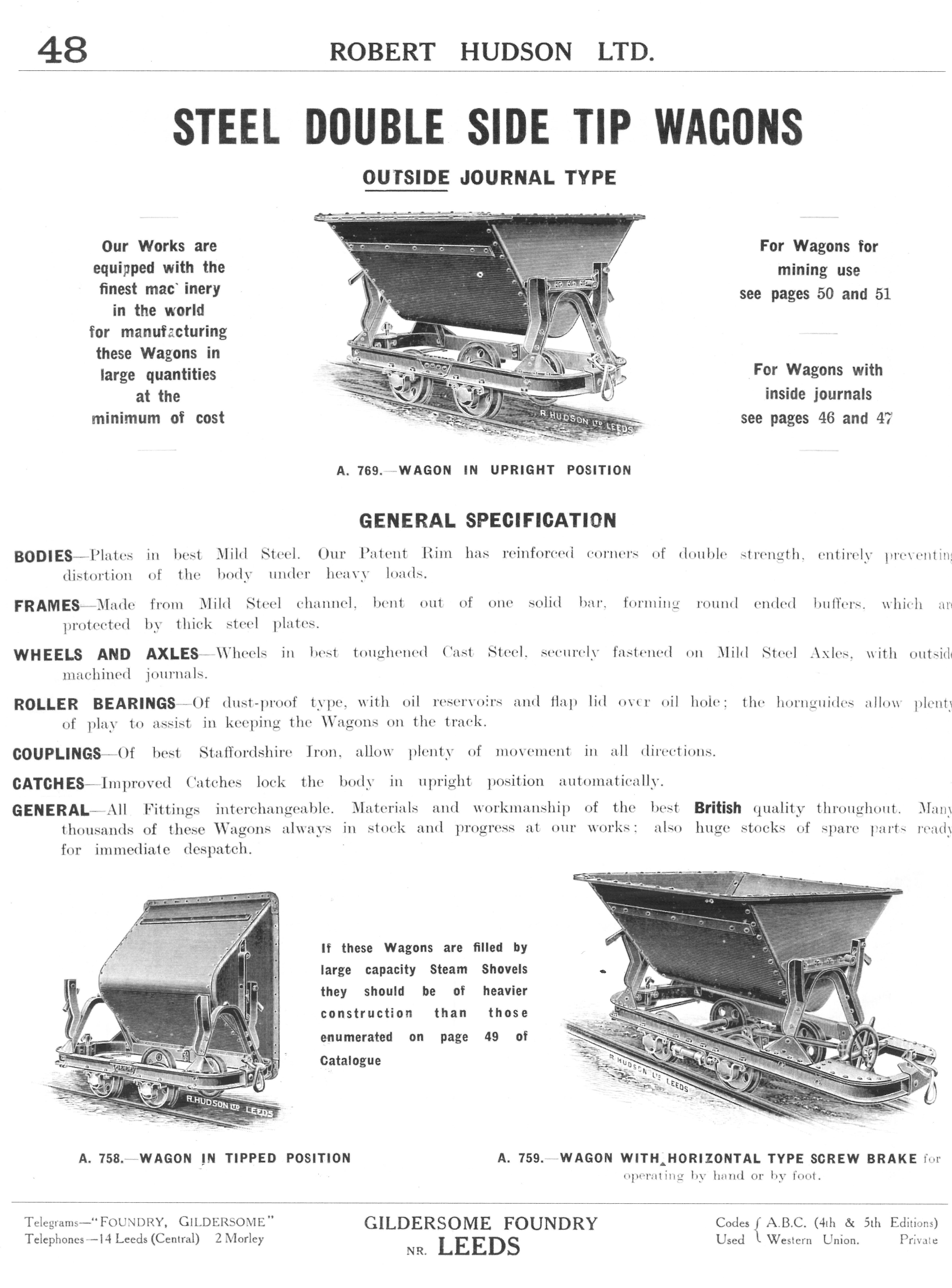 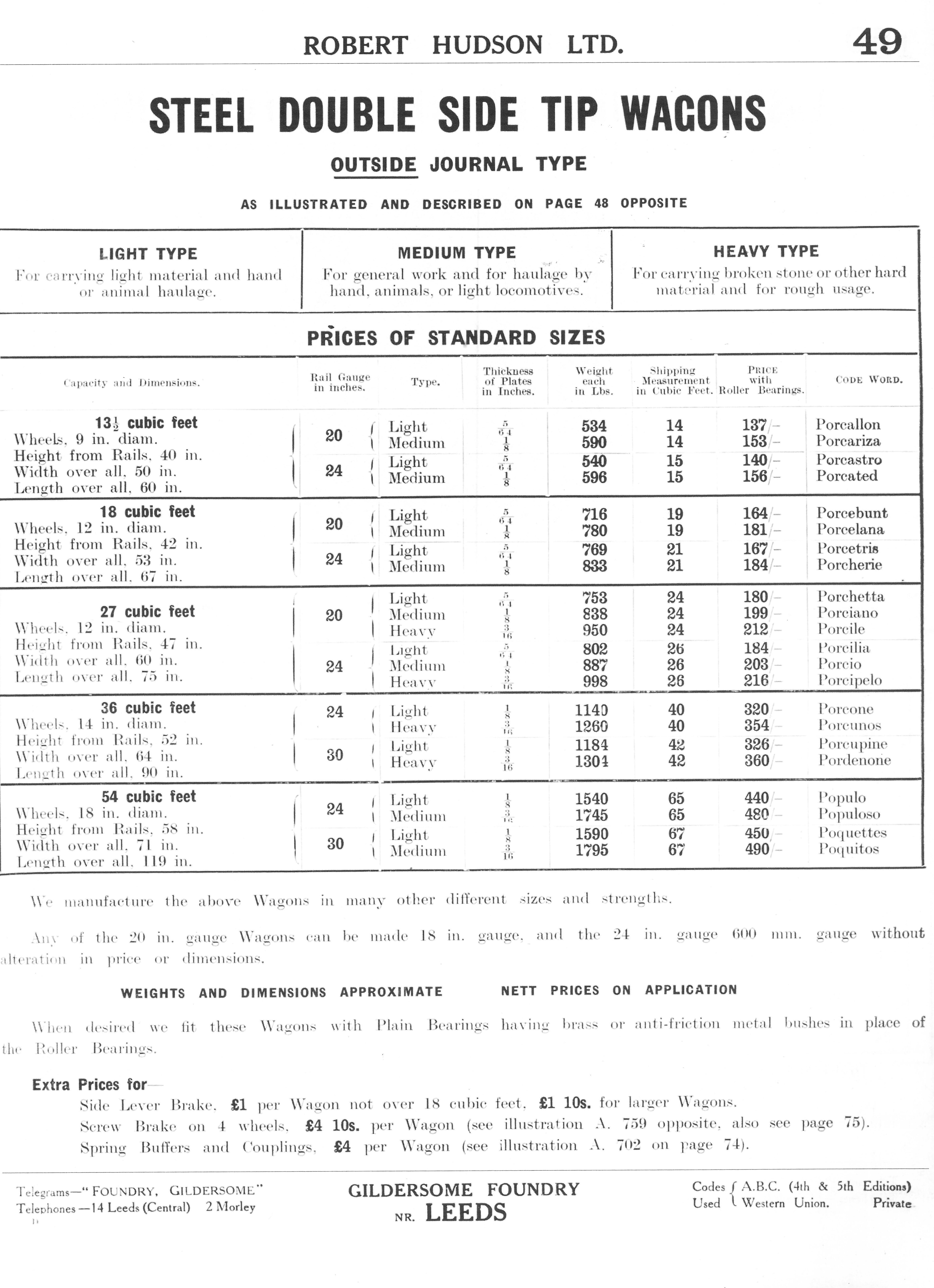