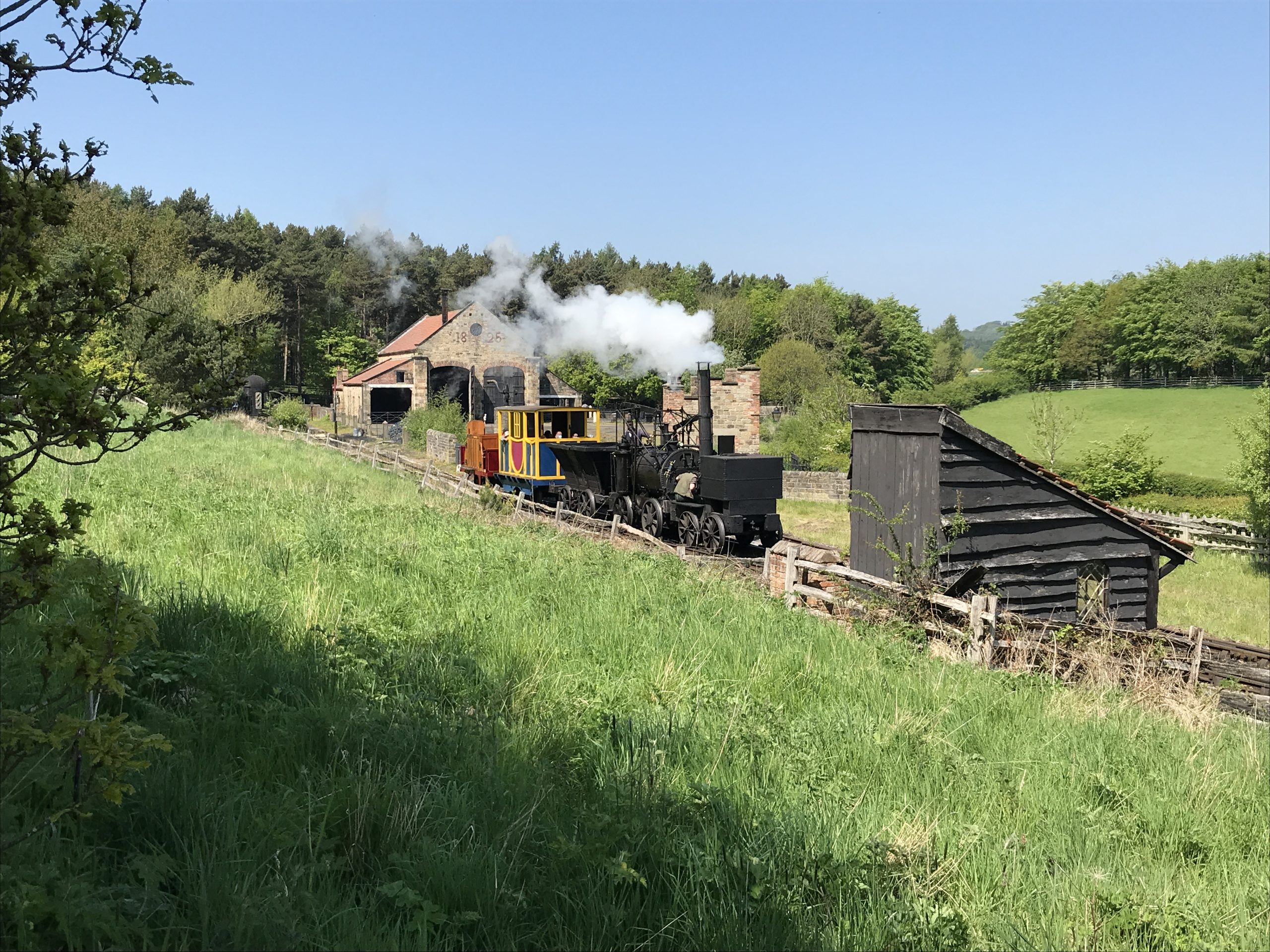 We’ve reached the summer half term holiday, including a Bank Holiday Monday within it, and the museum has certainly become much busier.  We had targetted the weekend (just gone) for a return to operation of the Waggonway, which entailed preparing the railway (infrastructure inspections and some spot-resleepering), the locomotive and rolling stock and carrying out crew refresher training and competence assessments.  As a result, a ‘soft’ opening was possible on Friday 28th.  This warm-up was probably as well, as Saturday was very busy and operating in a socially distanced manner plus a shorter train (the semi-open coach being withdrawn in 2019 for work on the body, work it is still waiting on) has ensured that the intensity of operation is very much higher than that previously experienced.  To this extent, we are going to amend the staff shift pattern to ensure we can cope with demand and offer visitors the best chance possible of having a ride.  This comes at a price however, with the weekend operation of No.18 on the Colliery line being cut from the programme as the staff there will be required at the Waggonway.  We are looking at some alternative arrangements to give No.18 a run out once a week, probably on a Friday, so at least those who wish to see the Colliery line running will have a chance to do so.

We have also discovered that the more intensive working puts pressure on the water supply – the current locomotive supply being ‘adequate’ but no better and somewhat outpaced by the operation of more trains.  So, that’s another thing for the list as we get used to operating the museum under these new circumstances.  Staff numbers are depleted as we have had a number of the team find other work during the closure period, and others have had changes to their circumstances that reduce their availability.  This was something we could see coming, but not fully evaluate as the furlough scheme masked the reality of who would and wouldn’t be returning.

So, for now we must focus on creating a reliable operation, pretty much everyday, and if possible, with more capacity for visitors.

Below: Puffing Billy gets back into its stride at the Waggonway, with the reduced train formation (offering three separate compartments for socially distanced family bubbles).  This does, at least, ensure that there is plenty to see going on here! 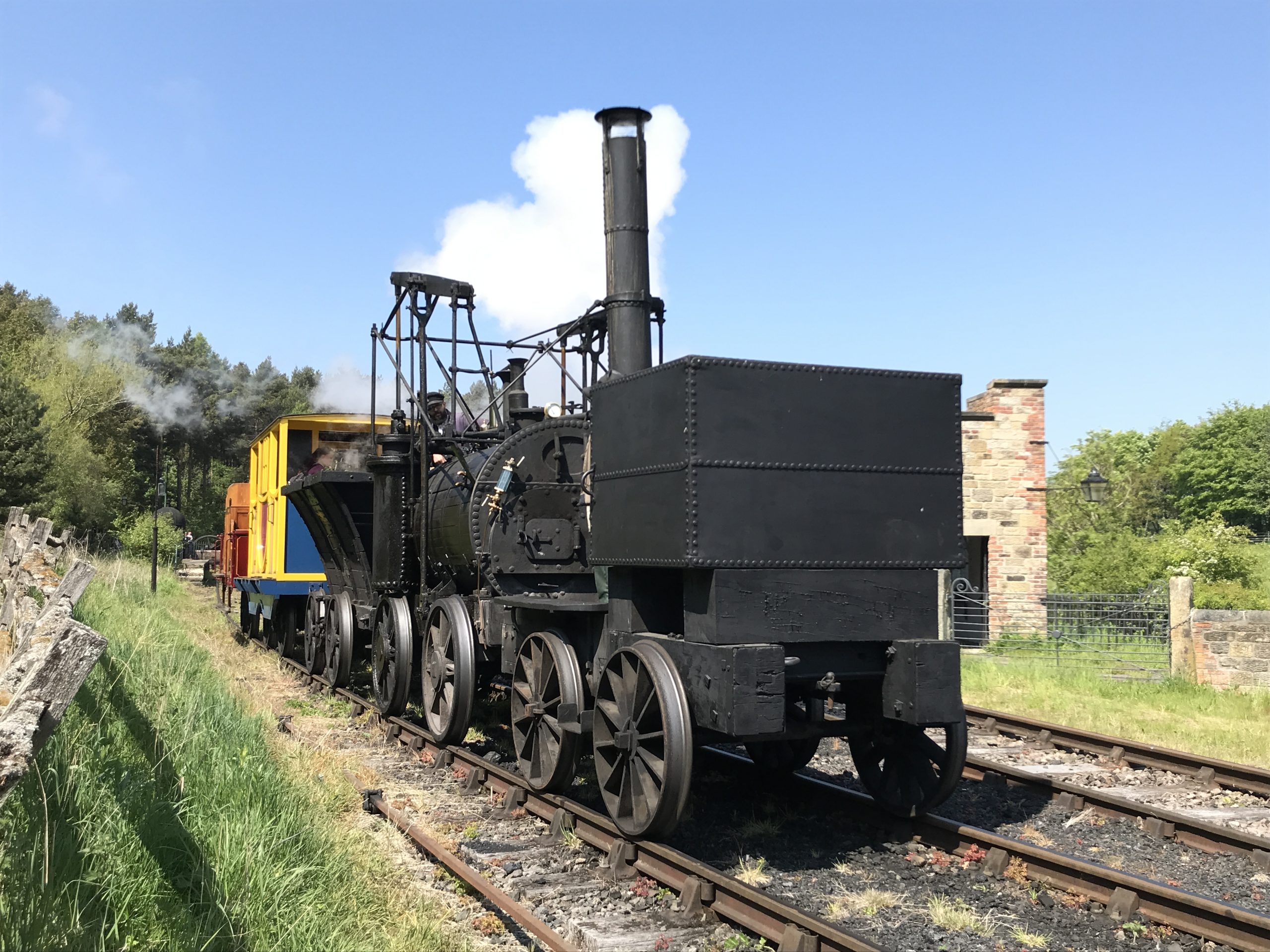 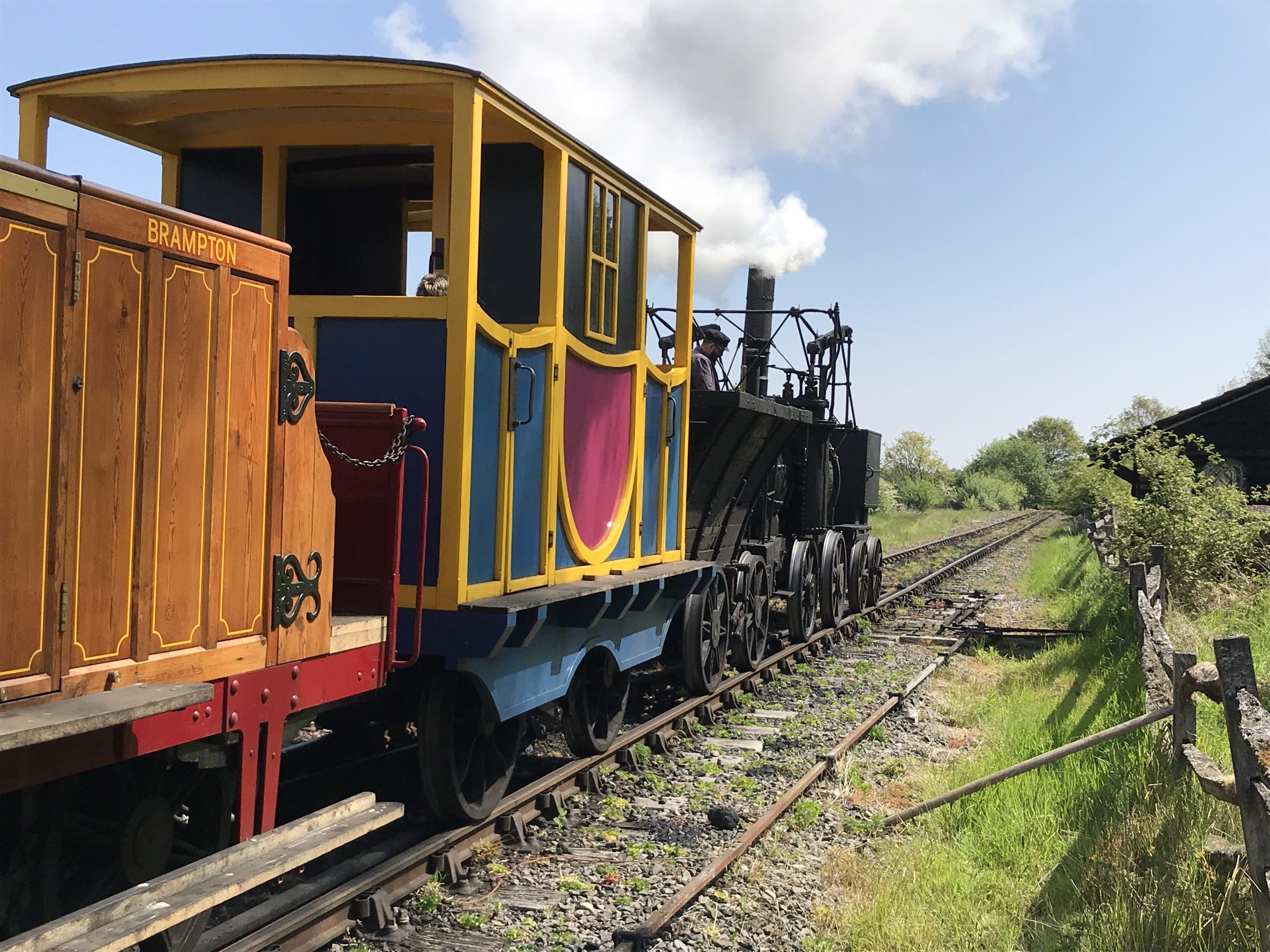 Below: A view of the Brampton Dandy, which acts as coach, guard’s accommodation and push/pull vehicle.  Note the panel behind the guard’s head, to provide some physical separation from the passengers inside the compartment – clearly no roof equals ‘outside’ here too! 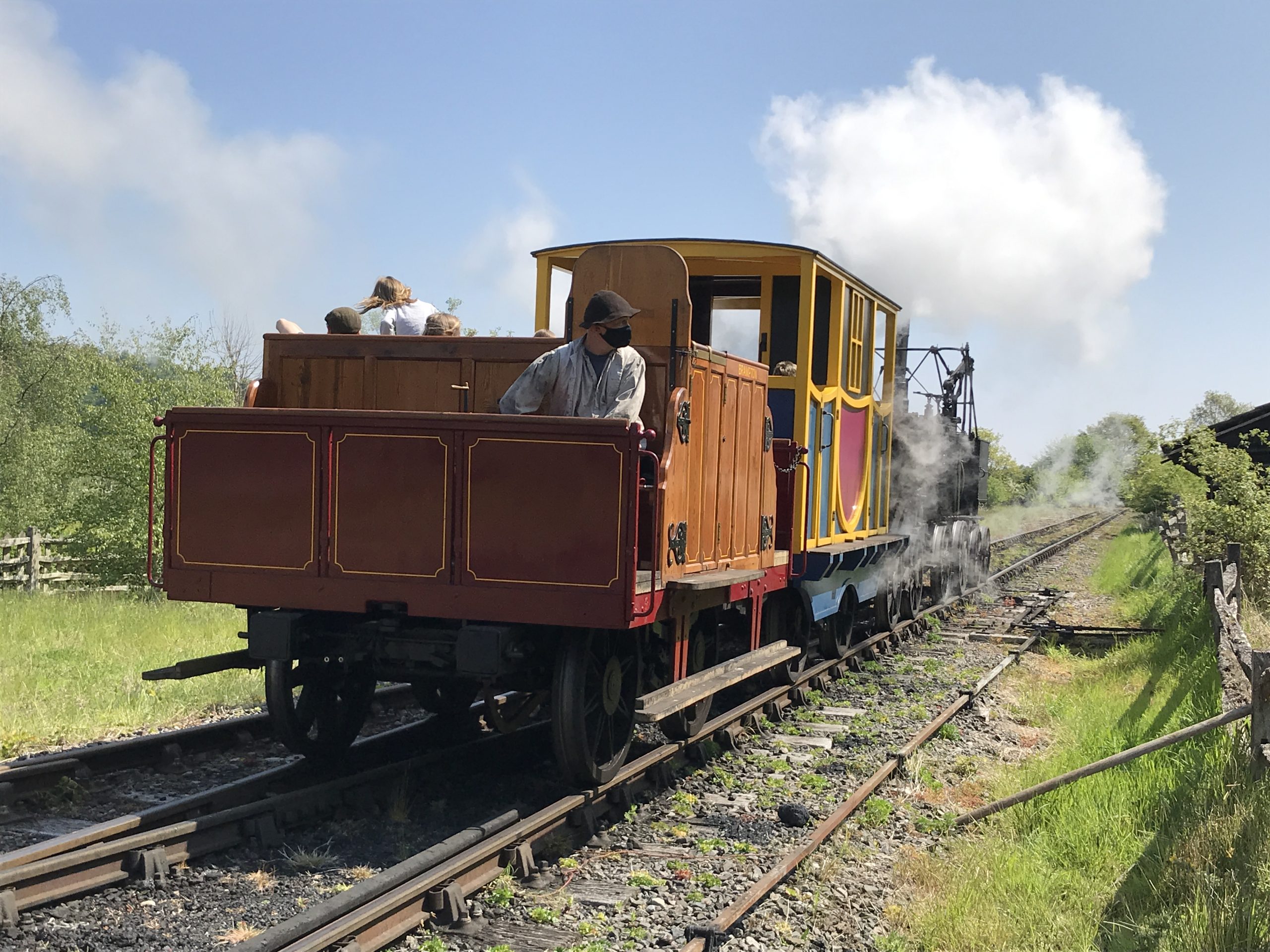 Below: It is very nice to see the Waggonway operating once again and animating this area of the museum’s landscape.  St Helens church is to the right, Pockerley Old Hall on the hill behind and the Quilter’s cottage is visible just behind the enclosed coach.  Puffing Billy had some issues with the locomotive brake on Tuesday which curtailed the operation for the rest of the day.  Without a spare loco, unfortunately we are left with little option but to cancel, though the engine remained in steam and the team chatted to visitors who had arrived looking for a ride.  Steam Elephant will replace PB from the 2022 season (all being well with its overhaul), and the overhaul of Puffing Billy is likely to be quite involved as the frames require significant attention.  Therefore operating with one locomotive is likely to be a feature of the Waggonway for a few years to come (though, of course, Locomotion No.1 managed on its own prior to the arrival of Steam Elephant). 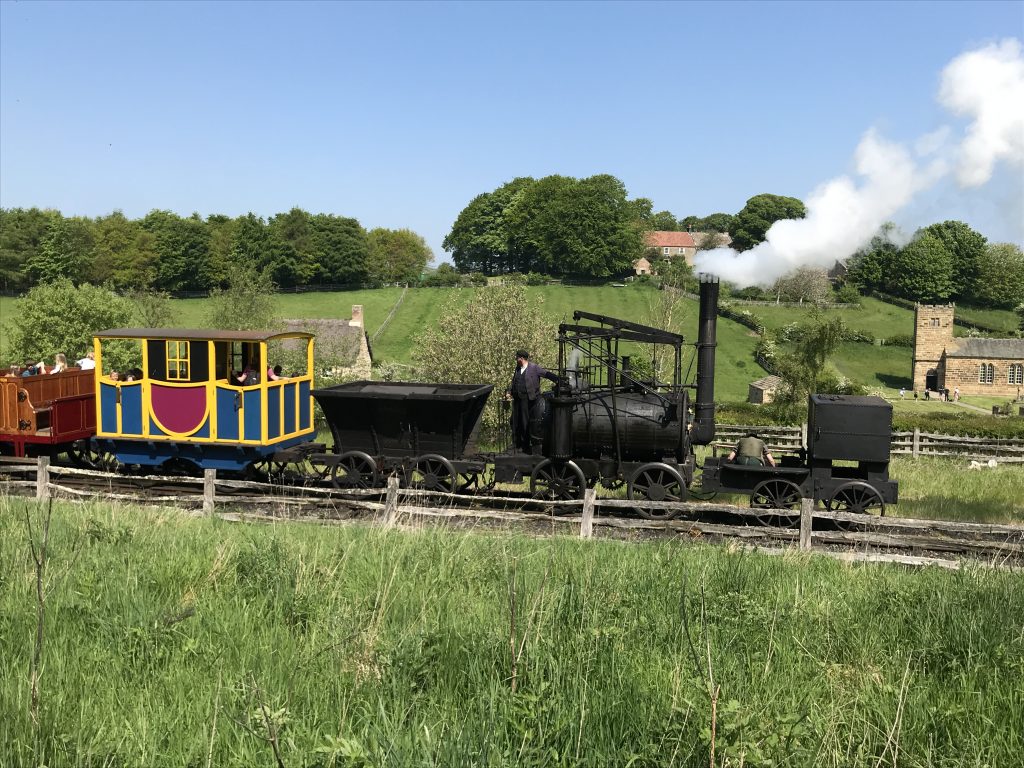 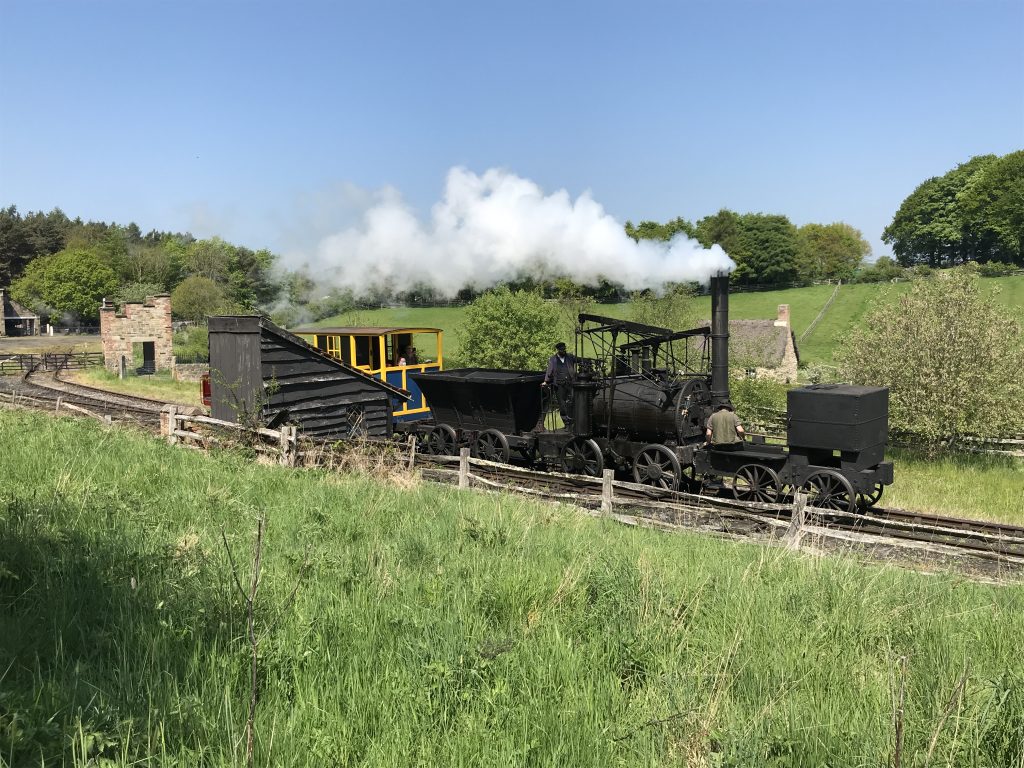 Below: The original S&D open coach was rebuilt several years ago, and given a roof.  This matched watercolour images of early Stockton & Darlington railway passenger coaches and provided more comfort to visitors on wet days.  This coach has now become quite weak in its structure and it was withdrawn in 2019 for a rebuild.  This did not occur, and at the moment we are investigating an interim programme of work to strengthen the coach end to end (the primary weakness it suffers from, which results in the doors being awkward to close) and enable it to return to use with just the centre (accessible for wheelchairs and pushchairs) in operation.  This would have been the COVID-19 Secure limit in any case for this coach.  Hopefully we can find an economic way to return it to service for the summer holidays…  Meanwhile, once funding is obtained, plans are being developed for the rebuild of this coach including substantial renewal of the body and frame, perhaps in 2022. 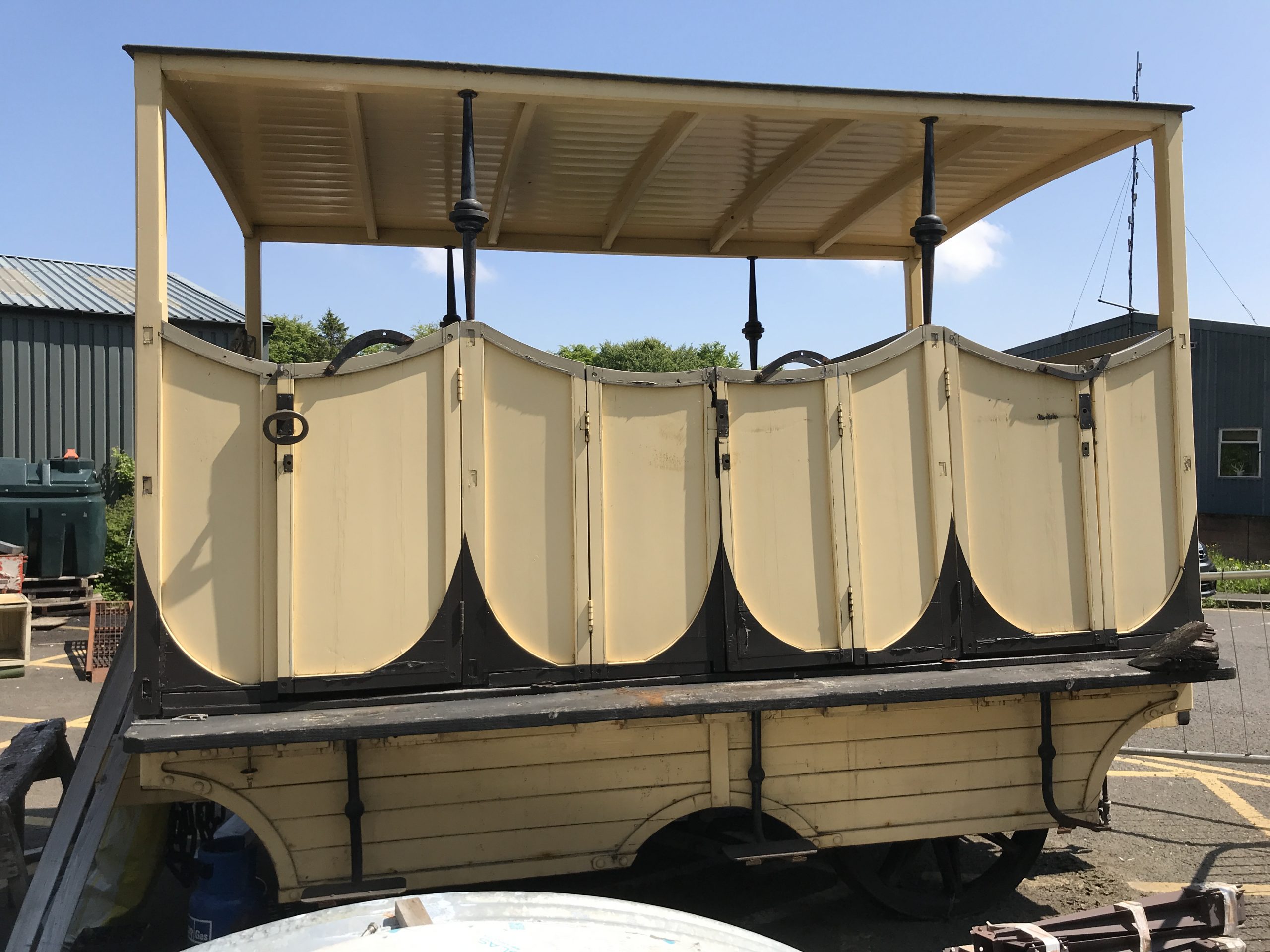 Below: Over in the Colliery, spot-resleepering is underway to replace a number of the timber sleepers with plastic ones.  We have a substantial number of these sleepers in stock, obtained for the Tramway, but with little prospect of being able to implement the original ambitious programme for these, we are using some of them for running repairs, whilst the rest will be used to spot-resleeper the Tramway between Pockerley and the Town area.  The rails are now fastened down by clip and screw, rather than spikes, which provides a much more secure anchor and once less susceptible to movement, particularly as these sleepers will not rot.  As can be seen here, once in place, they are virtually indistinguishable from the timber sleepers.  The point lever seen here is also earmarked for replacement by a weighted lever from a stock of components that we have recovered from other areas. 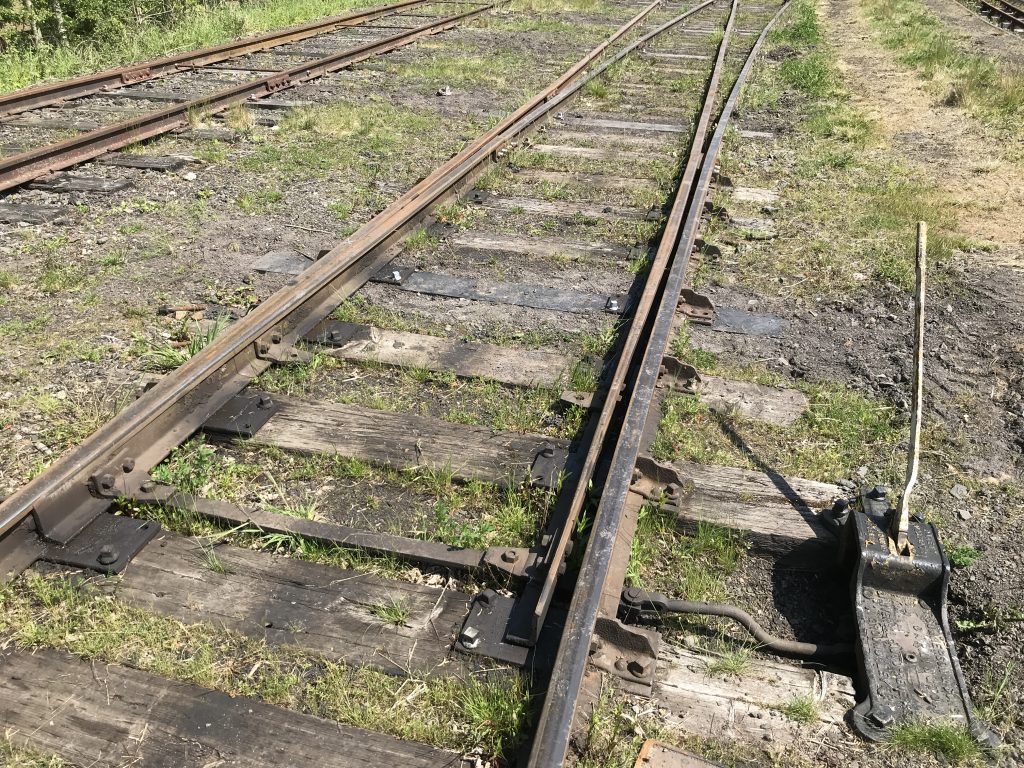 Below: A clearer view of the plastic sleepers in situ.  The main clue to their installation is the fact the rails are fastened to them using clip and screws (though re-sleepering using timbers have also utilised these fastenings in recent years).  Currently, one in four are being replaced in the middle road to the rear of Francis Street. 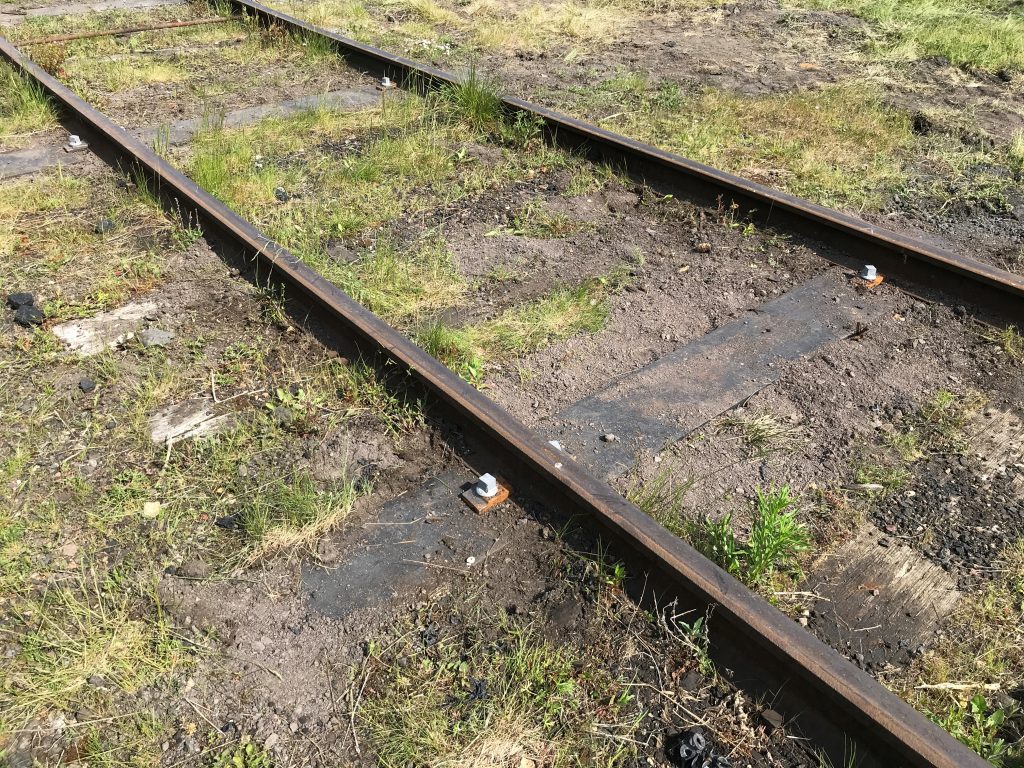 Below: The buses have been vital to transporting visitors this week, and have not stopped, one seemingly passing the office window every few minutes.  Rotherham 220 and Darlington 4 are operating the core service, with the Daimler D-Type coming out in the mornings and afternoons to bolster the service and assist visitors returning to the Entrance.  The first photo shows 220 calling at the Welfare Hall stop, whilst the second shows the D-Type departing Pockerley on a short working (Pockerley to Foulbridge via the Entrance).  Meanwhile, regarding Crosville 716, watch this space for some news on it very soon… 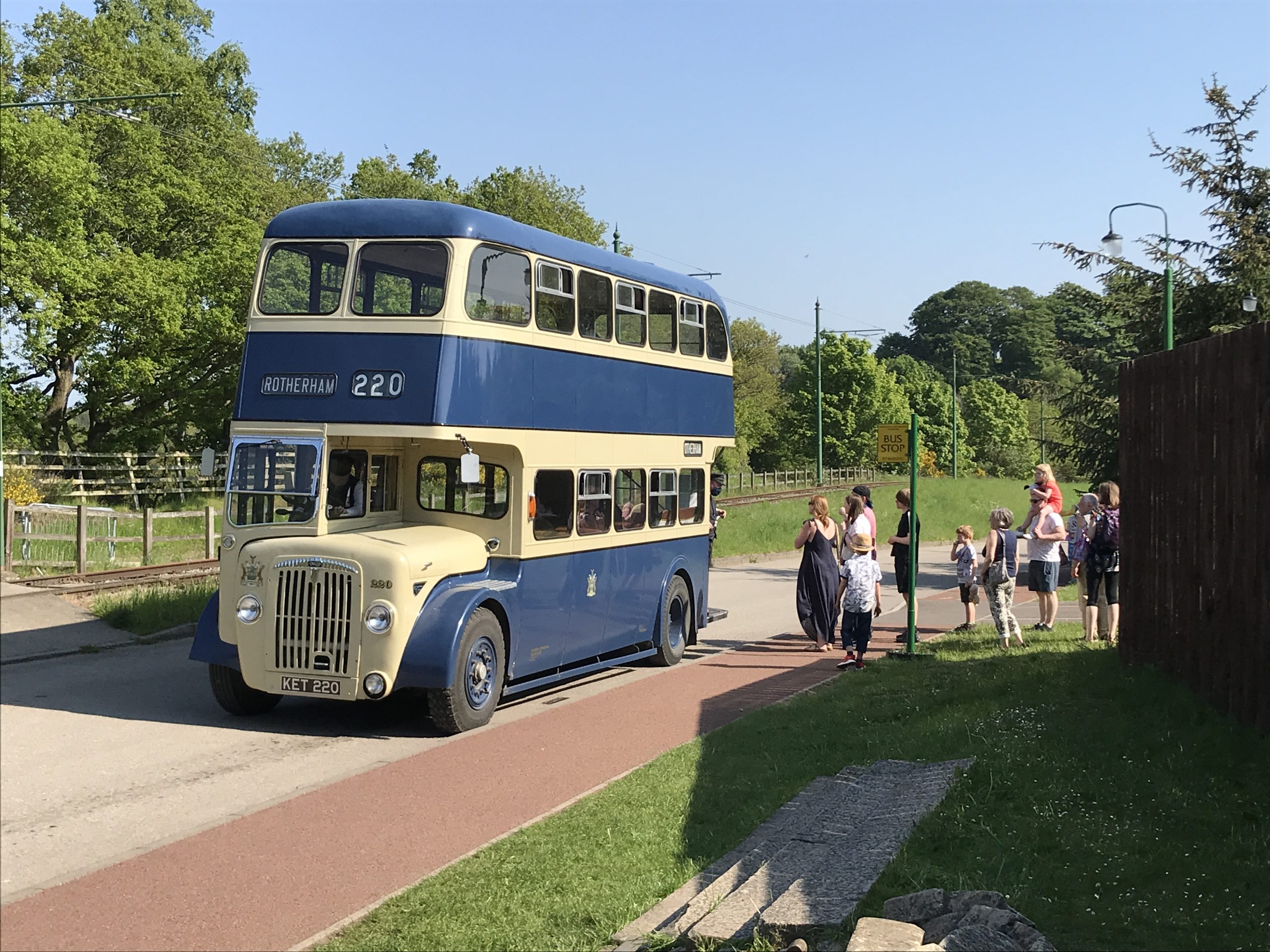 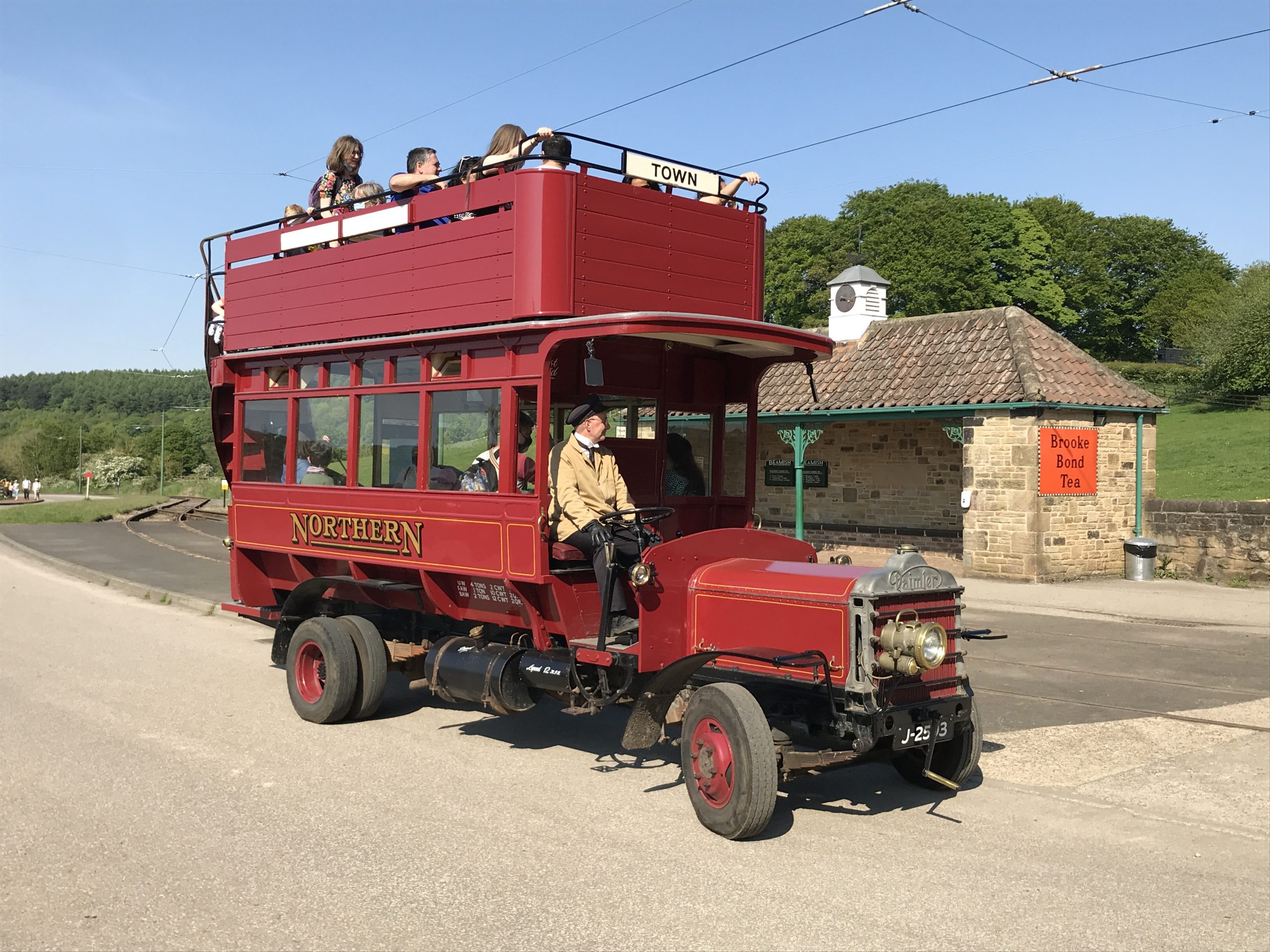 Below: The farming team’s Fordson Super Major has been receiving repairs for a leaking cylinder liner.  The parts needed are on order and hopefully will arrive before the workshop team are back at work for their three days next week.  Their other tractor is also waiting on parts, leaving the horses and a little Fergie to carry on with the farming work at the moment. 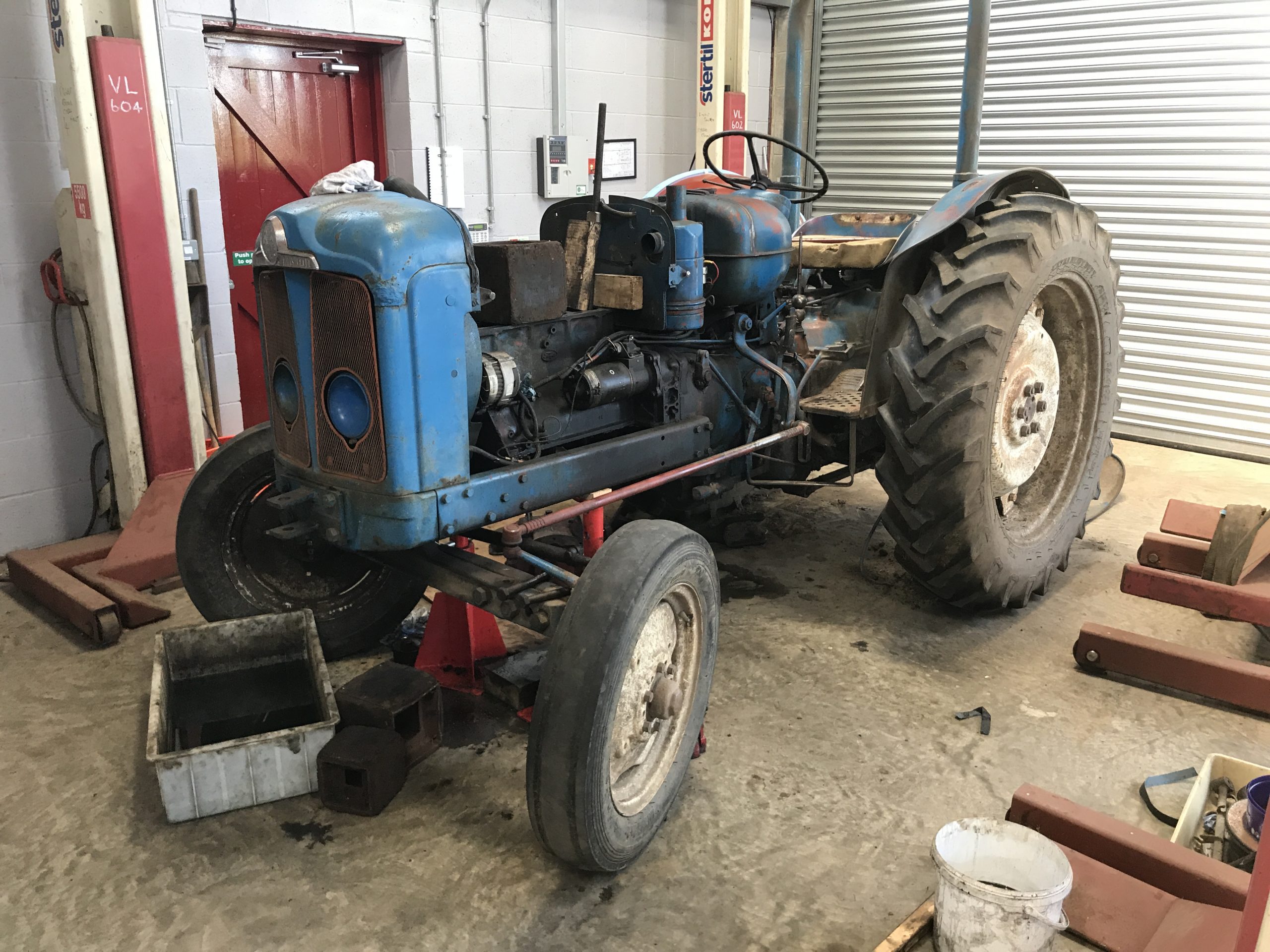 Below: With our own fairground rides being unavailable this year, and the team who would carry out restoration work on them being engaged on other work required on site, we have a visiting travelling fair, owned by Arthur North, based at the museum at present.  There are a variety of rides and sideshows available, and these will be rotated across the season to spread wear and tear and create interest – for instance I believe there will be even more rides for the summer holidays.  I thought it would be useful to record this on the blog as the current operation, with an external owner, might be of interest to readers. 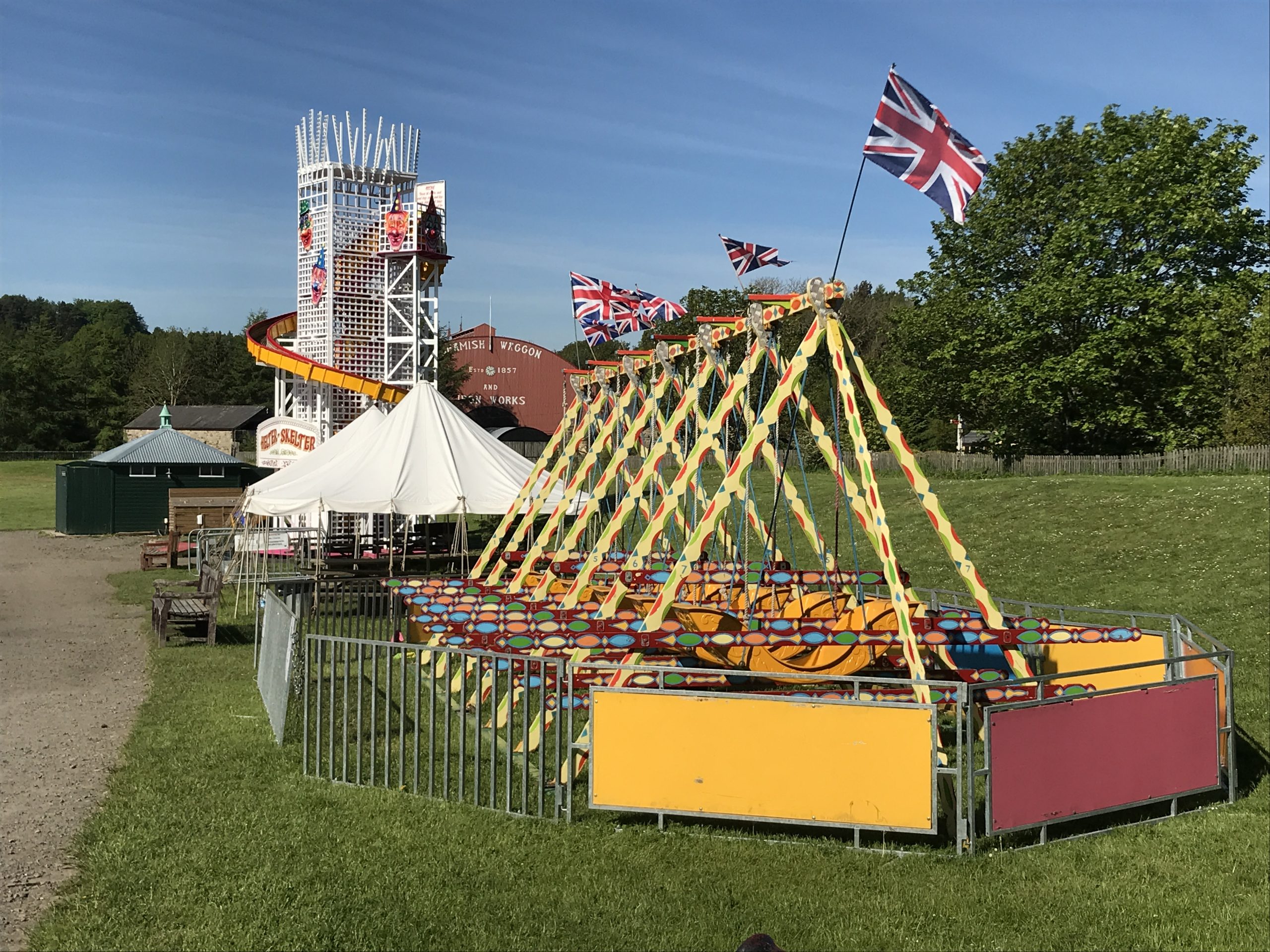 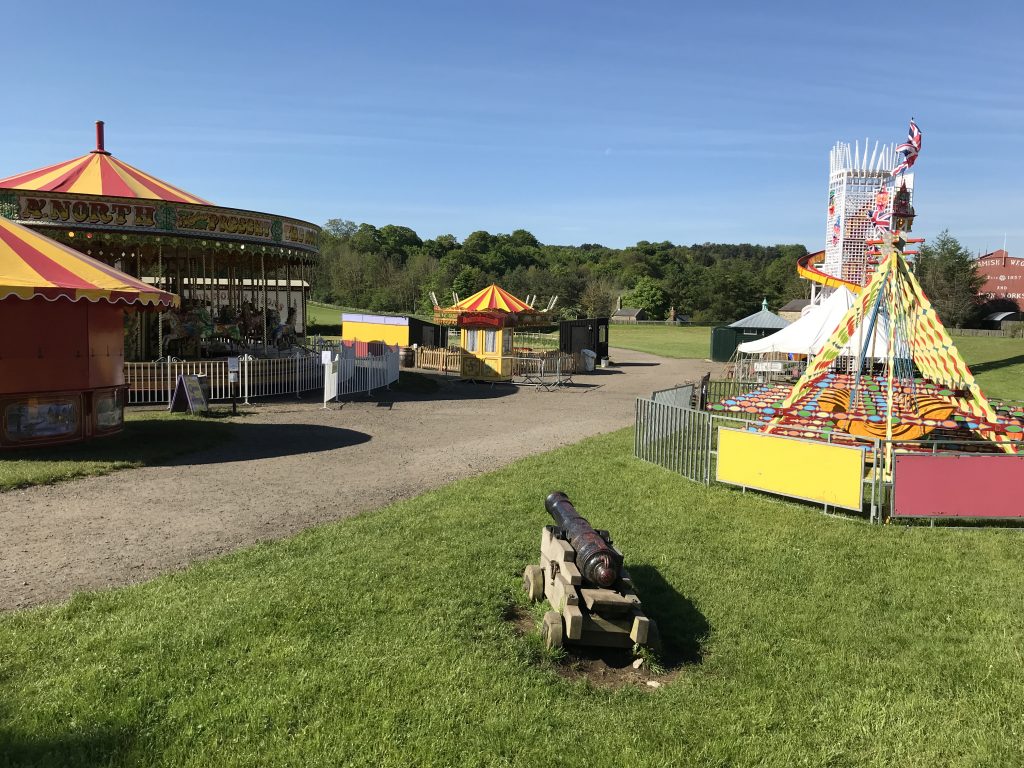 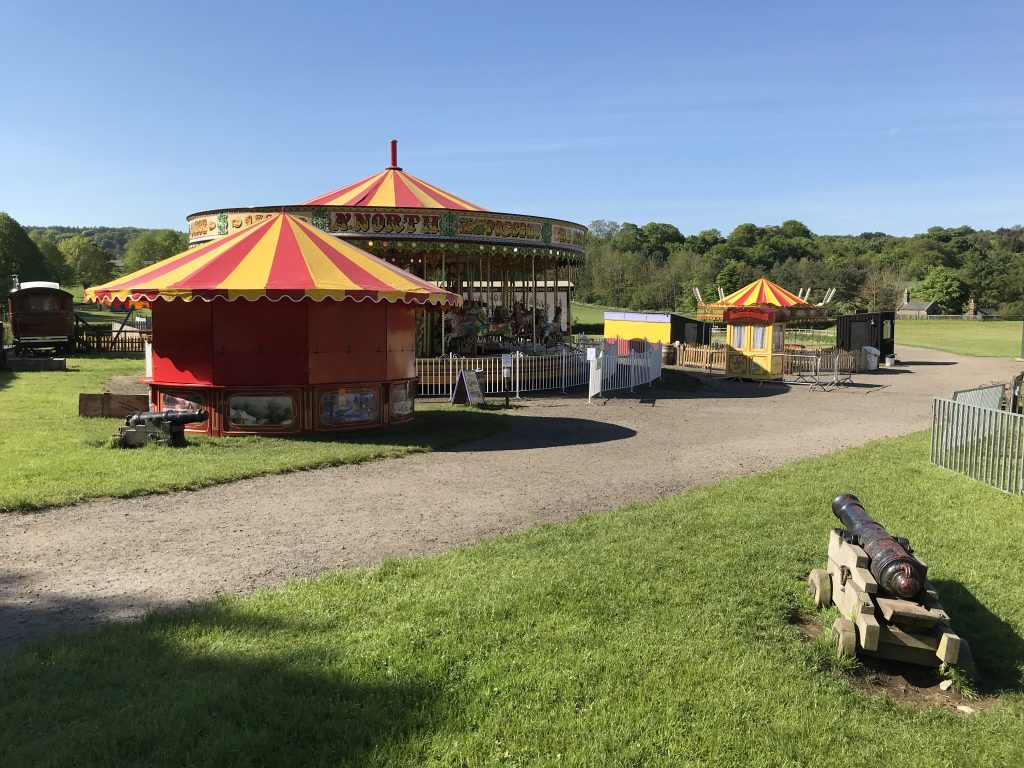