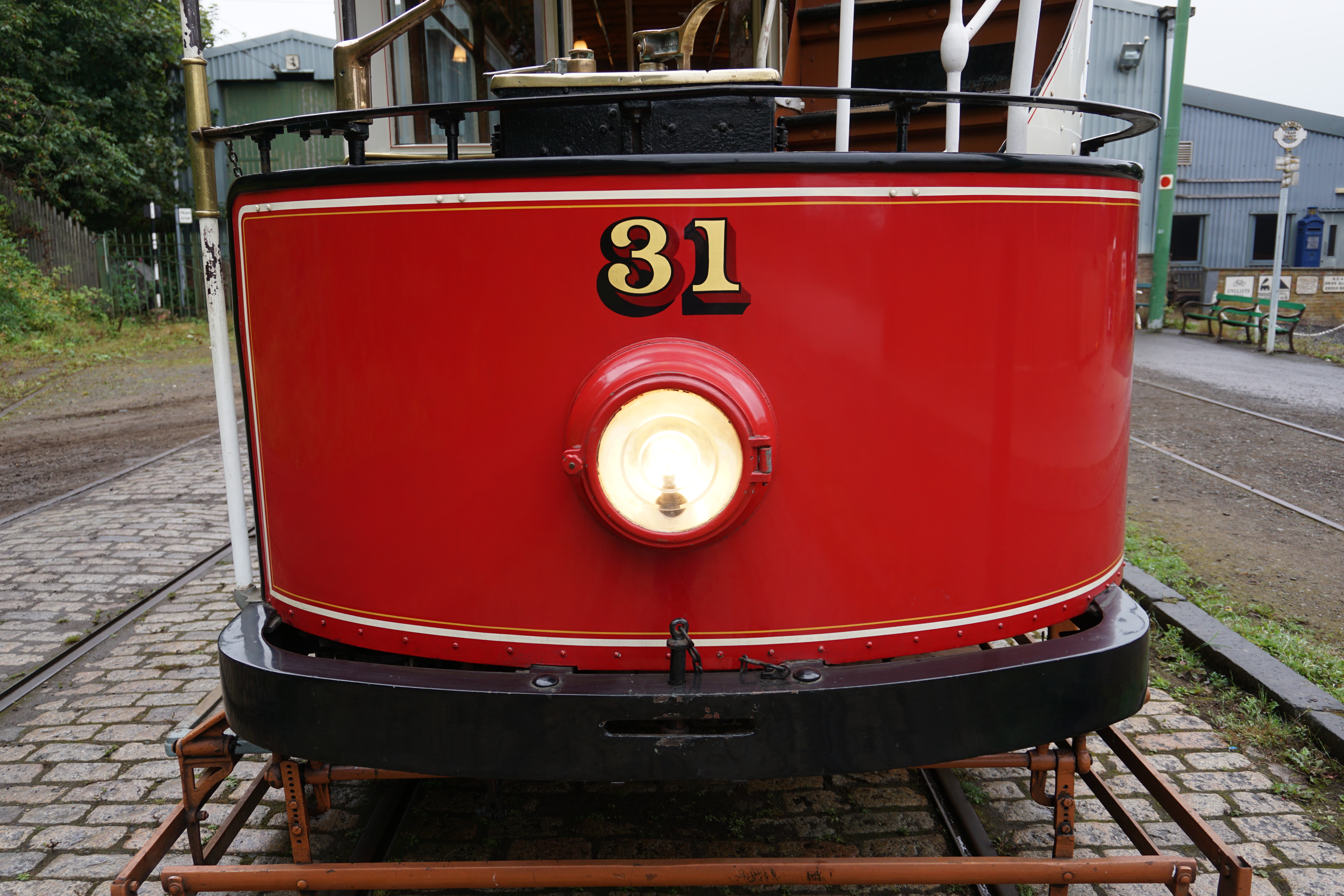 Return of the trams!

We’ve waited a long time for this day, and it has been something we know visitors have keenly missed up to now.  Saturday 4th September marked the re-start of a public service on the museum’s tramway, operating between Foulrbridge and the eastern end of the Town.  We hope to extend the operation into the Town’s High Street this autumn – for which some non-tramway related matters need to be resolved (not least, the external queues for various buildings which occupy the northern side of the street).

Below: In the preceding weeks, crew refresher training and re-assessment, along with tramcar inspections and some permanent way works were completed, in readiness for the targetted resumption of services on the 4th September.  Here Sheffield 264 and Blackpool 31 sit outside the depot, whilst Oporto 196 and Sunderland 16 were shunted around the depot.  264 had just returned from a venture to the Town as part of its inspection, whilst 31 and 196 have been in regular use for the training runs.  In the background Newcastle 114 sits in readiness for its motors to be refitted (readers may recall this work was about to commence, when we were closed for the first lockdown in March 2020).  This work will recommence in due course.  Further in the depths of the depot, Gateshead 10’s overhaul is proceeding.

It is fully in my mind that 2023 marks the fiftieth anniversary of our tramway, and it is a milestone we intend to celebrate!  Ideally, 10 will rejoin the fleet at this time, and a couple of guest tramcars are being considered too.  I also hope to update the tramway book, sold out some time ago, to mark the anniversary and update the public transport story at the museum – as by then we should have construction of the trolleybus route underway, as well as there being quite an increase in motorbus operations (including the new depot) to chronicle.  The aim is to have a substantially different book to the previous edition (Forty Years of Service), so that it is appealing to add to the bookshelf as a second volume for those who already have the first (and so make it commercially viable too!). 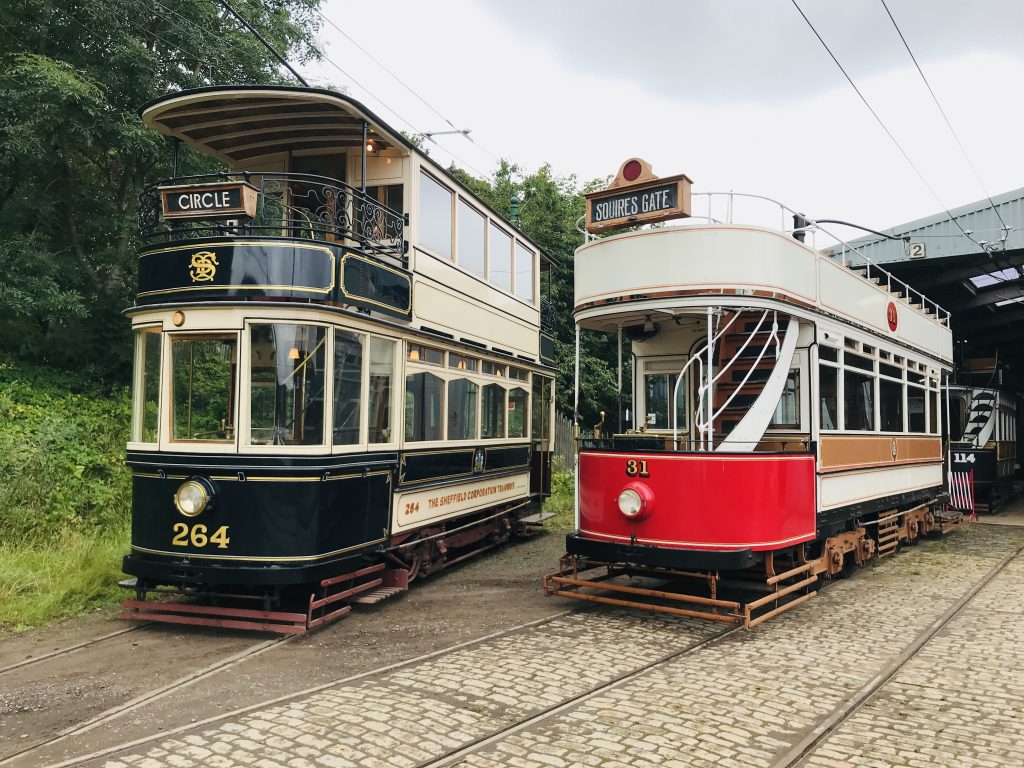 Below: Saturday 4th September, Blackpool 31 exits the depot en route to the Entrance to pick up the first passengers to be carried on the tramway since March 2020…  Sheffield 264 has also been prepared, and if the weather deteriorates further, the two trams will be swapped around. 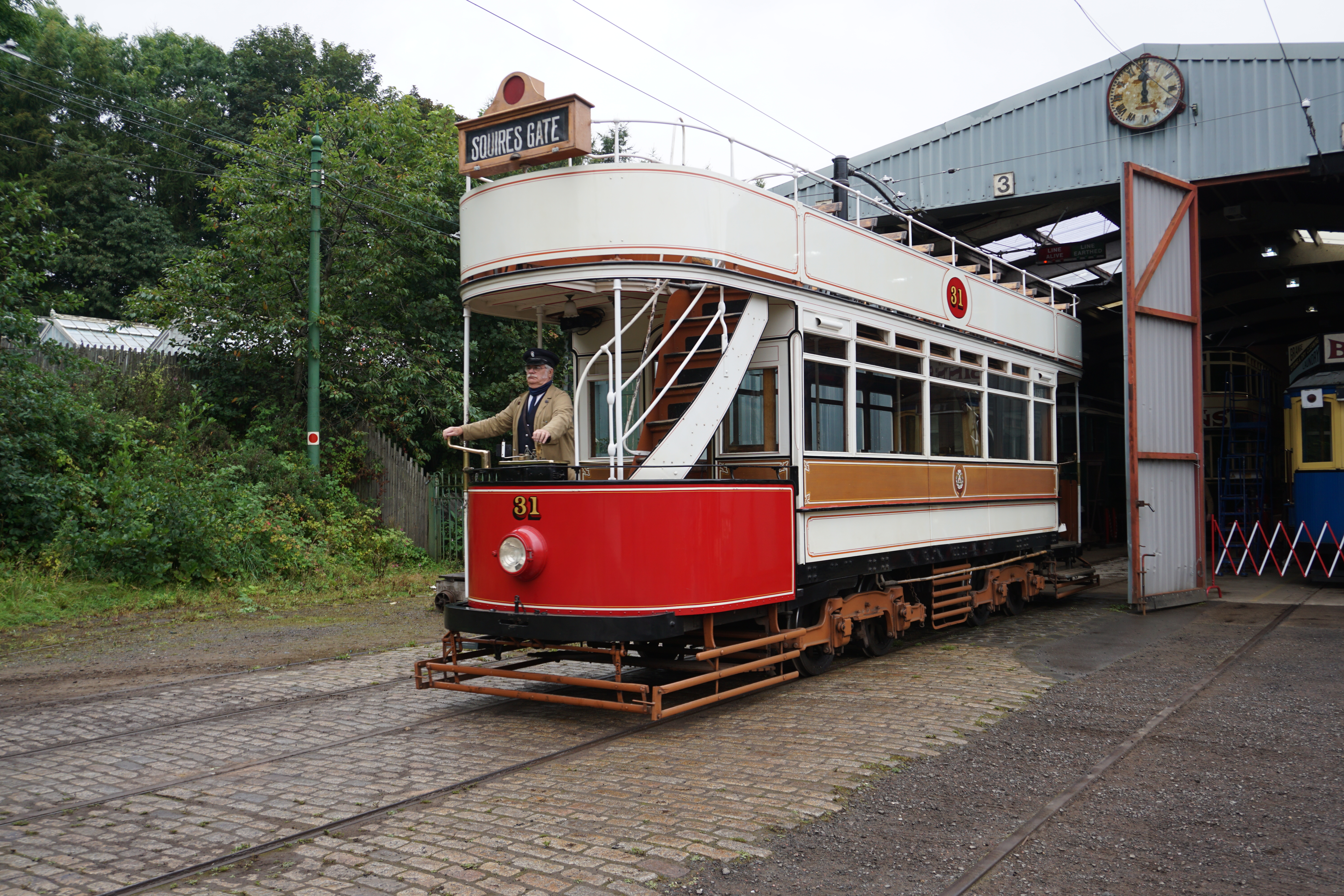 Below: Darlington 4, Crosville 716, Rotherham 220 and the Daimler D-Type are also in service today. 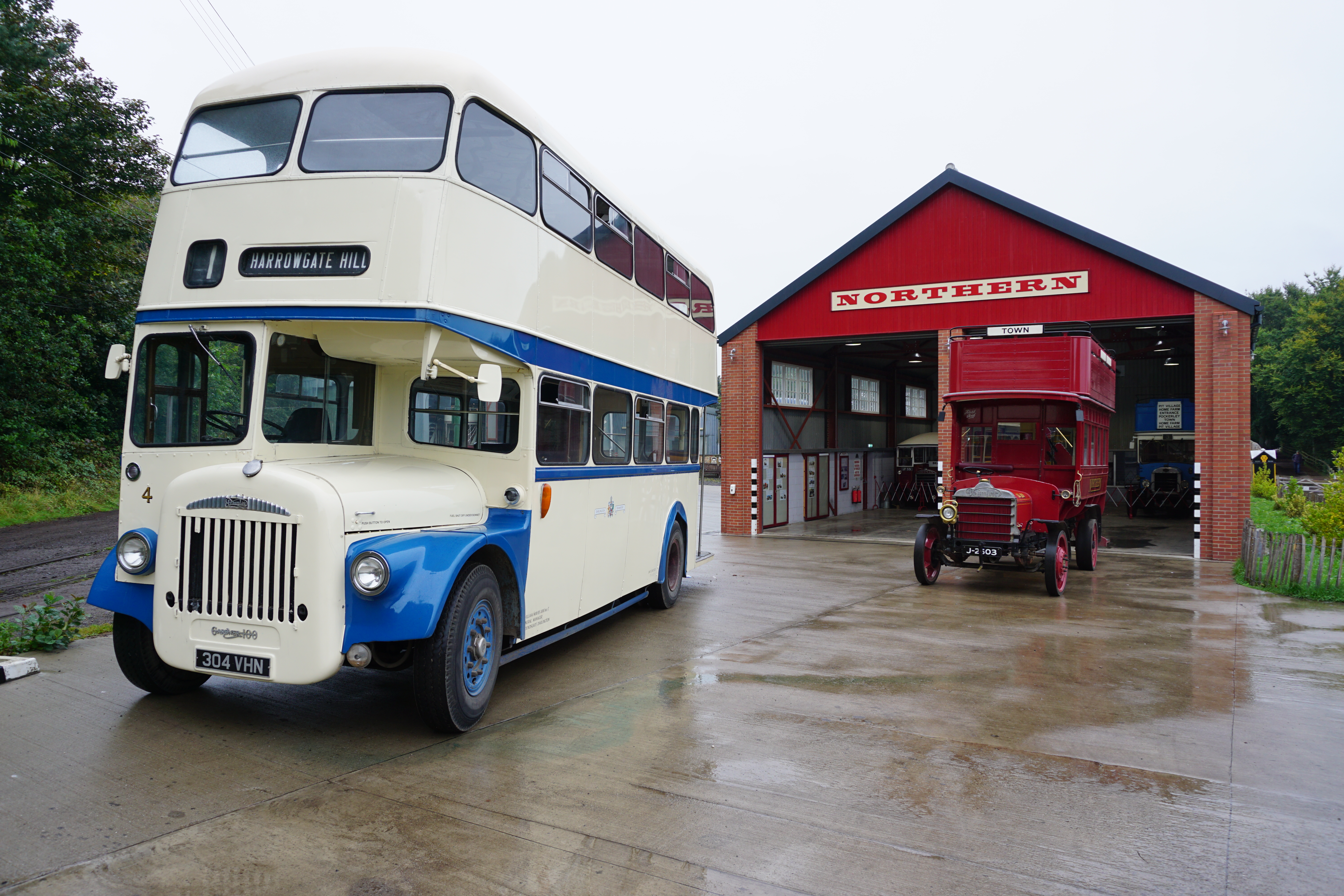 Below: The first passengers board 31, in readiness for their run to the Town.  At present the operation is limited to one tram, but the plan is to introduce more frequent services in October, and extend them into the Town’s High Street for reversal on the crossover there. 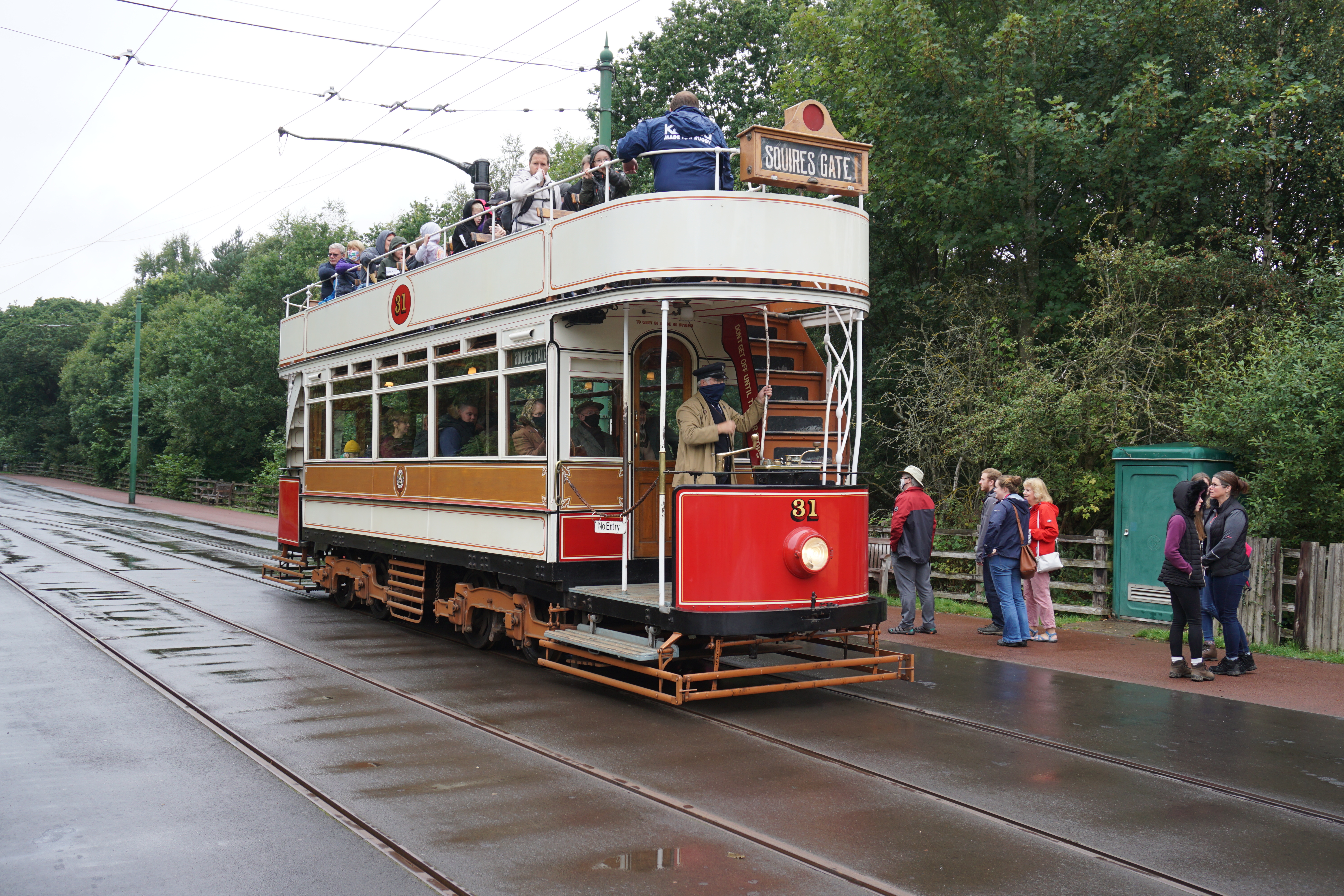 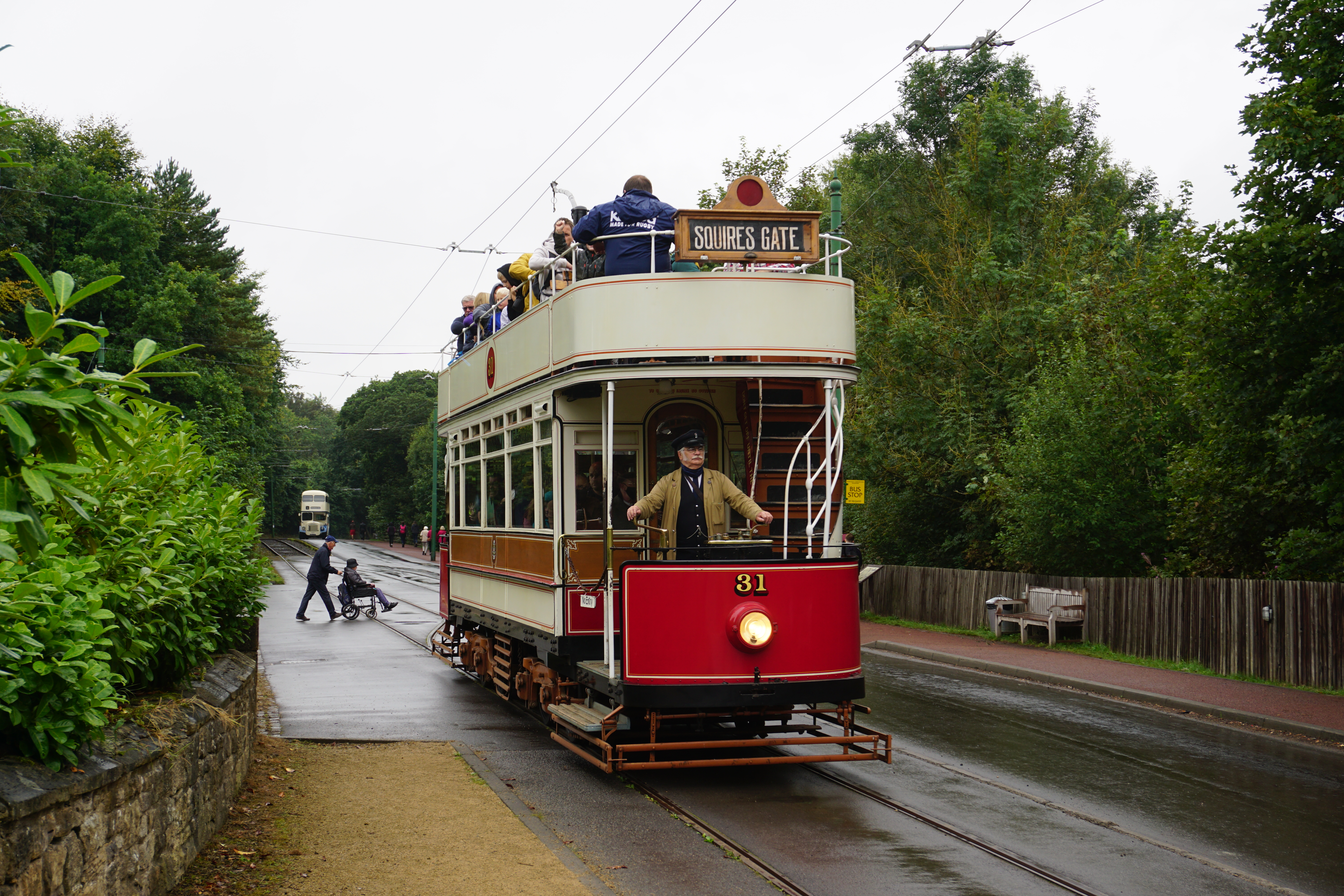 Below: On its way back to Foulrbridge on the first service outer-circle.  The weather is not being particularly cooperative today! 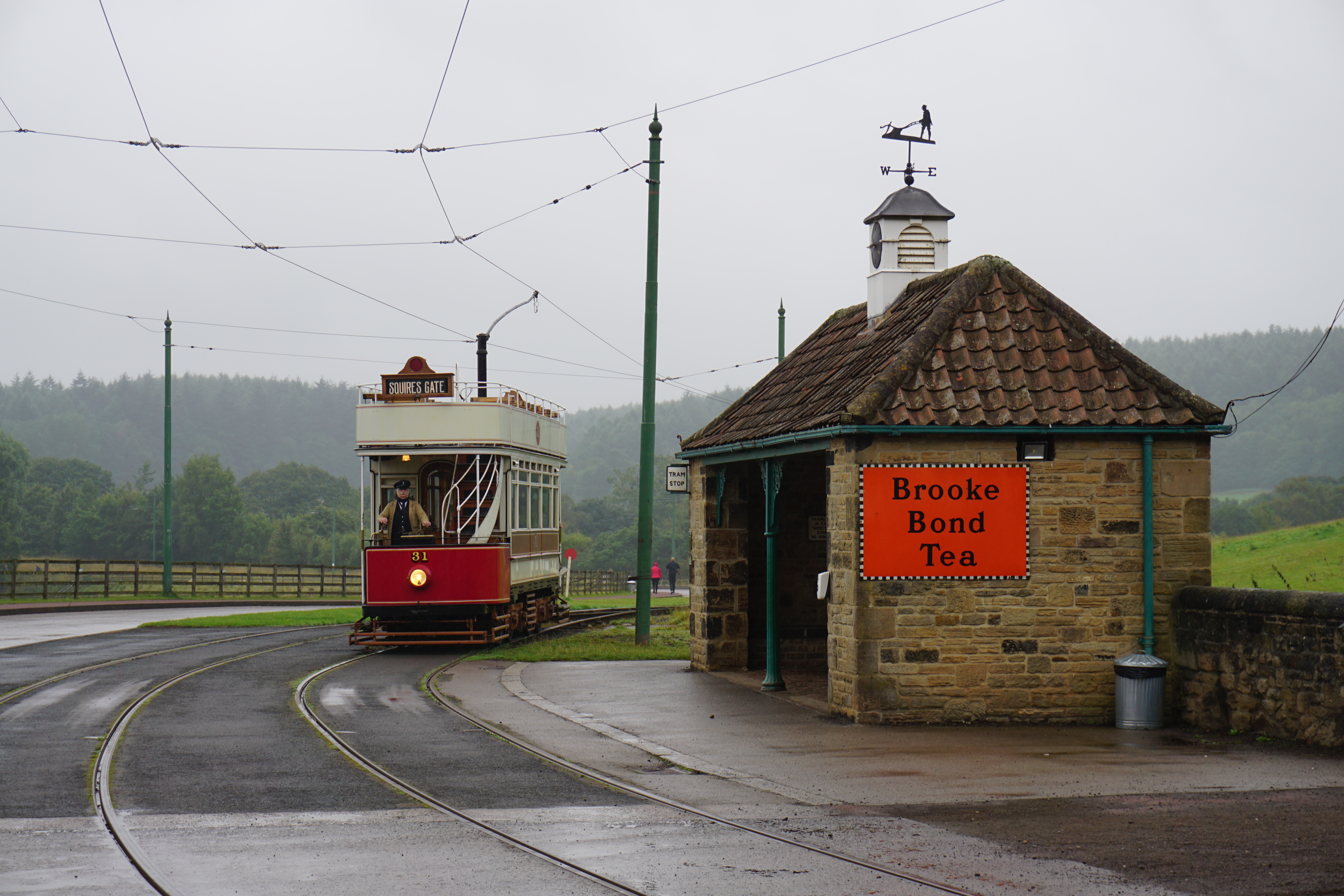 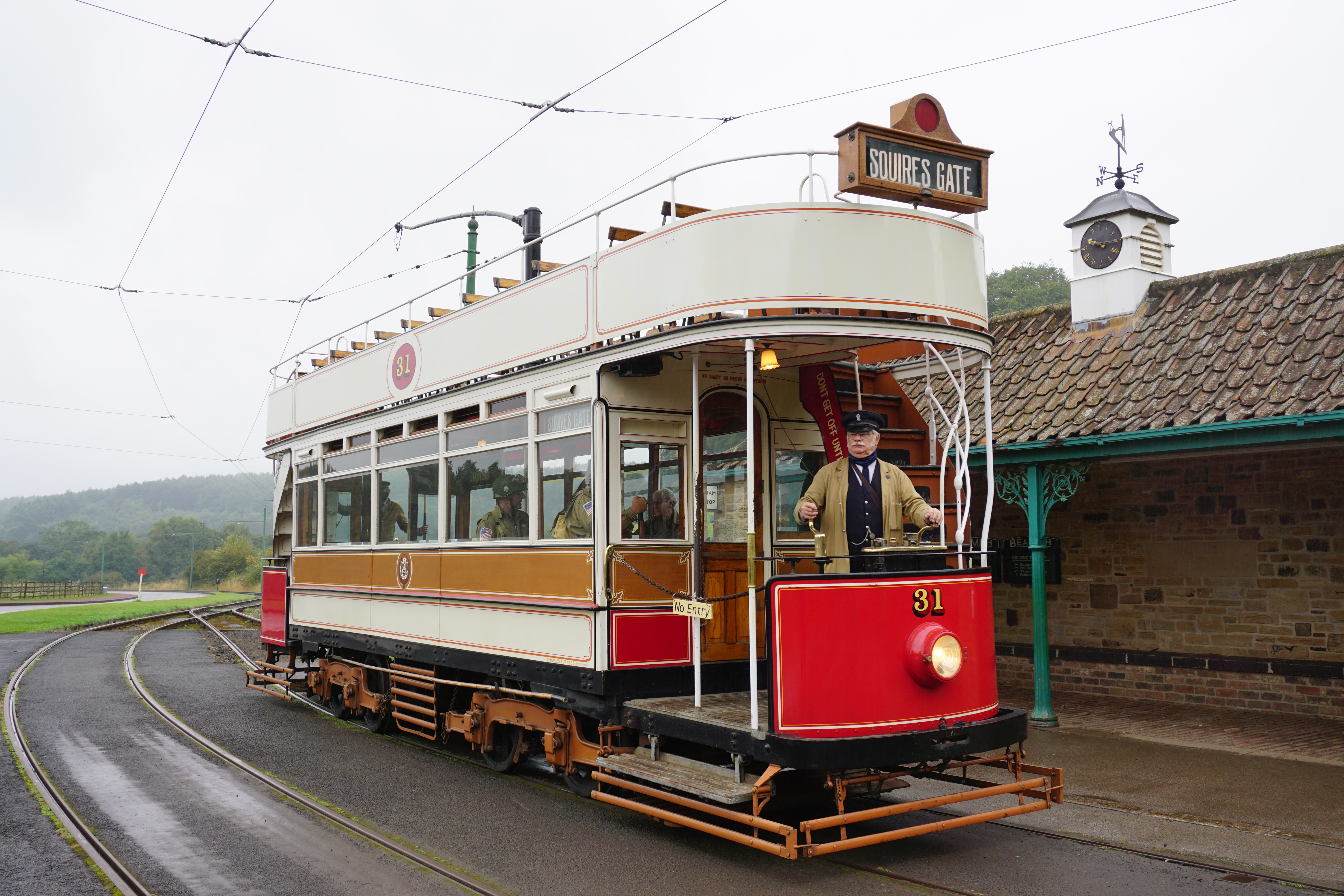 Below: The museum, in particular the Beamish Tramway Group, retains a detailed interest in the restoration of Rotherham Trolleybus 73, which has been rebuilt to a very high standard by Tim Stubbs and his team.  Readers may recall a post back in 2017 featuring 73, but I have re-posted it here for convenience:

Out on the road…

A recent open day gave Les Brunton, from the BTG, the opportunity to see (and photograph) 73, and view progress on what has been an extensive restoration.  Here are a couple of photos, showing progress on the bus.  Photos courtesy of Les Brunton 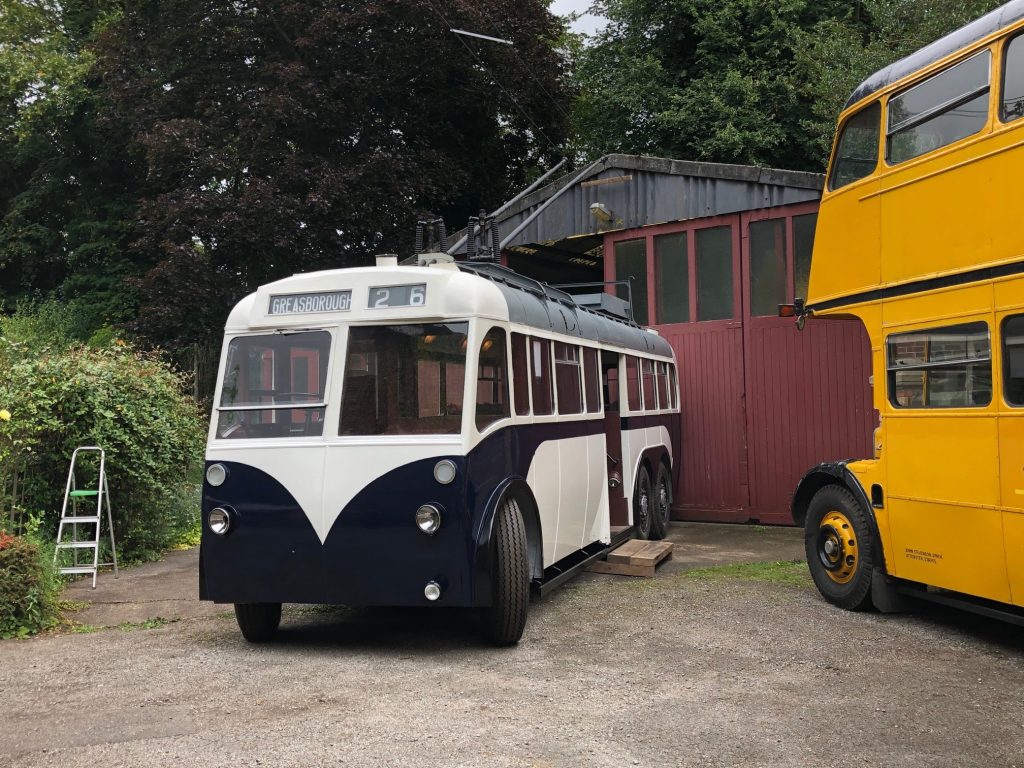 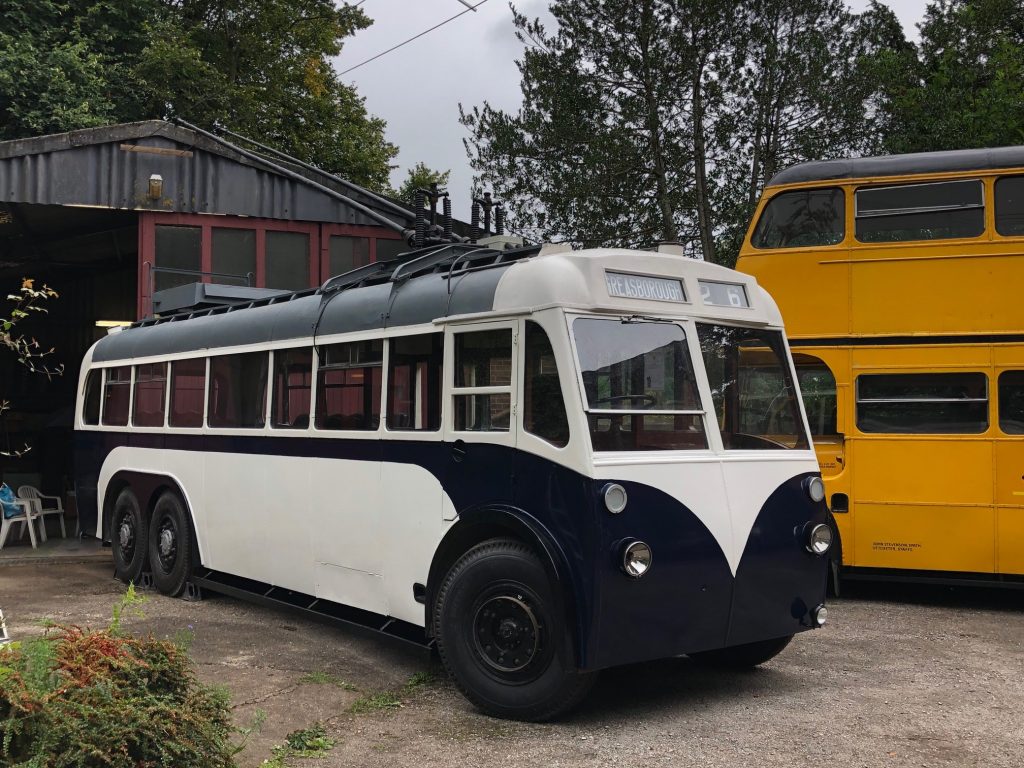 Below: I’ve included a gallery showing some of the WW2 military vehicles that have been on display as part of the Dig for Victory event this week.  The numbers seem to grow each year, with most of the equipment being of US origin.  It has become an impressive display, and runs until the end of the weekend for those who want to see it (including various runs and parades around the museum).  Whilst photographing Blackpool 31 this morning, the column of vehicles was taken around the site to orientate and brief drivers – it continued to pass me for quite a while, giving those visitors around quite a good sense of the endless lines of vehicles that were amassed in the south of England before D Day in 1944.  I suspect this is an event that will grow and grow, as it seems to be very popular with visitors, and fits in well operationally as the use of the events field is entirely appropriate for what is quite a decent sized camp.  The event continues tomorrow (and includes other actives on site, in particular at Home Farm). 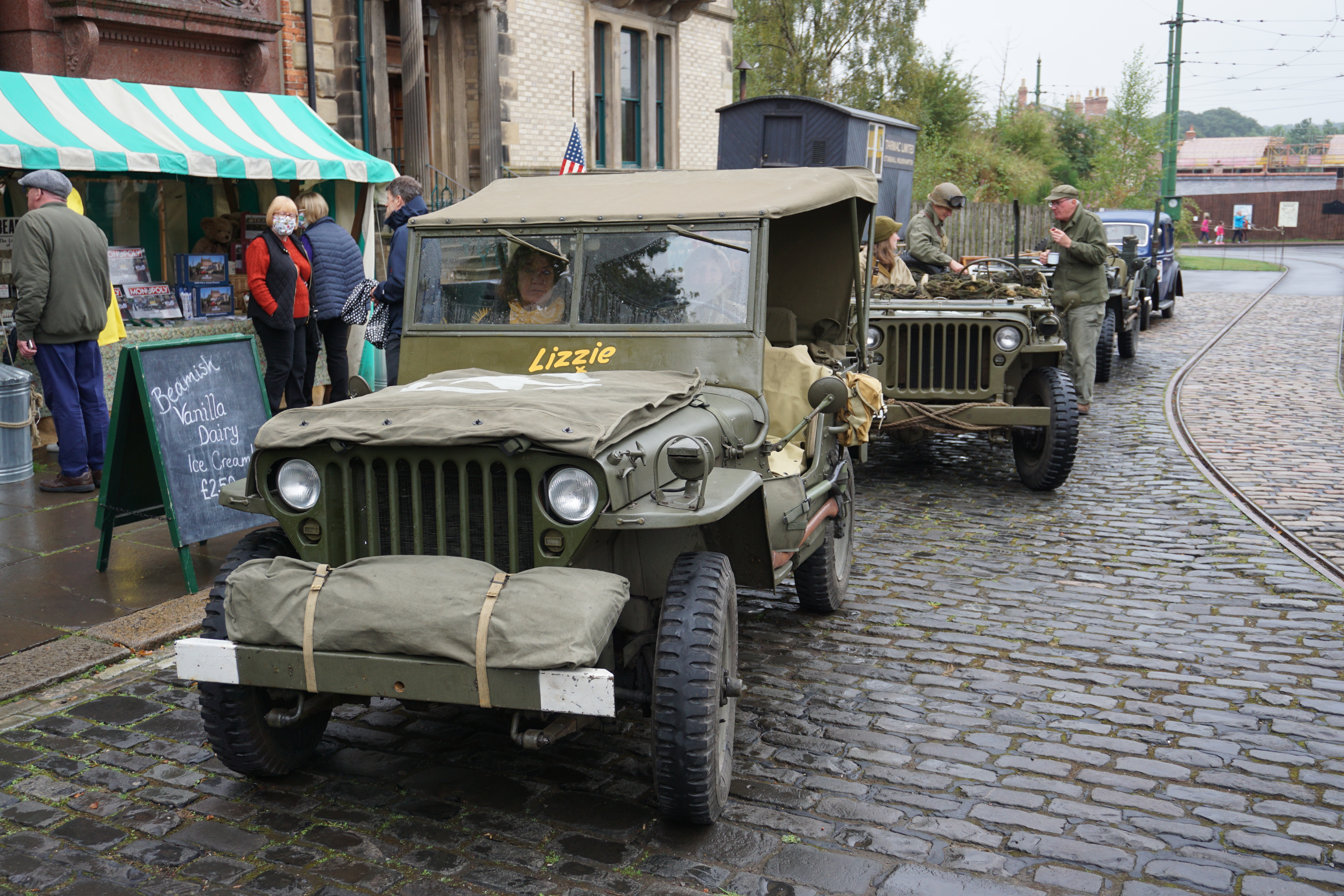 This is quite short notice, but we are very pleased to be in a position to announce two events this autumn:

For the Autumn Transport Gala, the museum will be aiming to host 50+1 working transport exhibits, including rarely-seen items from its own collection, to celebrate a return of the popular transport themed events to the museum’s calendar, following the cancellation of our fiftieth anniversary celebration sin 2020.

The museum will present an array of road steam engines, motorcars and motorcycles, bicycles, trams, buses and railway locomotives throughout the weekend.  Exhibits include at least ten traction engines and steam rollers, 20 pre-war Morris cars, the museum’s own trams and buses, five locomotives on the Colliery railways (standard and narrow gauge), the Pockerley Waggonway and a variety of historic motorcycle, bicycles and commercial vehicles from Beamish’s own collections.  Coffee Pot No.1 will be in steam, celebrating its 150th anniversary this year, a remarkable survivor, built by Head Wrightson on Teesside, in 1871.  It will also be one of the last opportunities to see Seaham Harbour Dock Company No.18 in steam, as the locomotive will be retired from operation in October, pending overhaul.

Vehicles will be in action around the museum site, as well as on display in several locations.  Visitors will once again be able to ride on the museum’s tramway (between the Town and Foulbridge), as well as on the replica Georgian Waggonway, behind Puffing Billy.

The Vintage Bus Running Day idea is intended to give visitors a taste of riding and viewing a number of restored buses, both from the museum’s own collection and some visiting vehicles.  We ran a similar event a few years ago and it proved to be fairly popular.  It is also planned to place Crosville 716 on ‘tour’ duty, to provide an opportunity to ride on the bus for a lap of the site, something not usually available as the bus is committed to providing wheelchair accessible transport on site.  Visiting buses are yet to be confirmed, but we hope to make more announcements on this front in the weeks ahead.  This event is dependent on attracting some visiting vehicles, and we’ll confirm it as soon as we can, but I thought the date would be one that some readers might want to pencil onto their calendars.

I appreciate the announcement of these events is rather close to their occurrence, but we felt confident to run some events, following a busy summer and the much-appreciated support of local vehicle/engine owners, who have indicated that they are keen to return to the museum.  It will also give us the chance to try some ideas ahead of what we hope will be a more familiar programme of events in 2022.