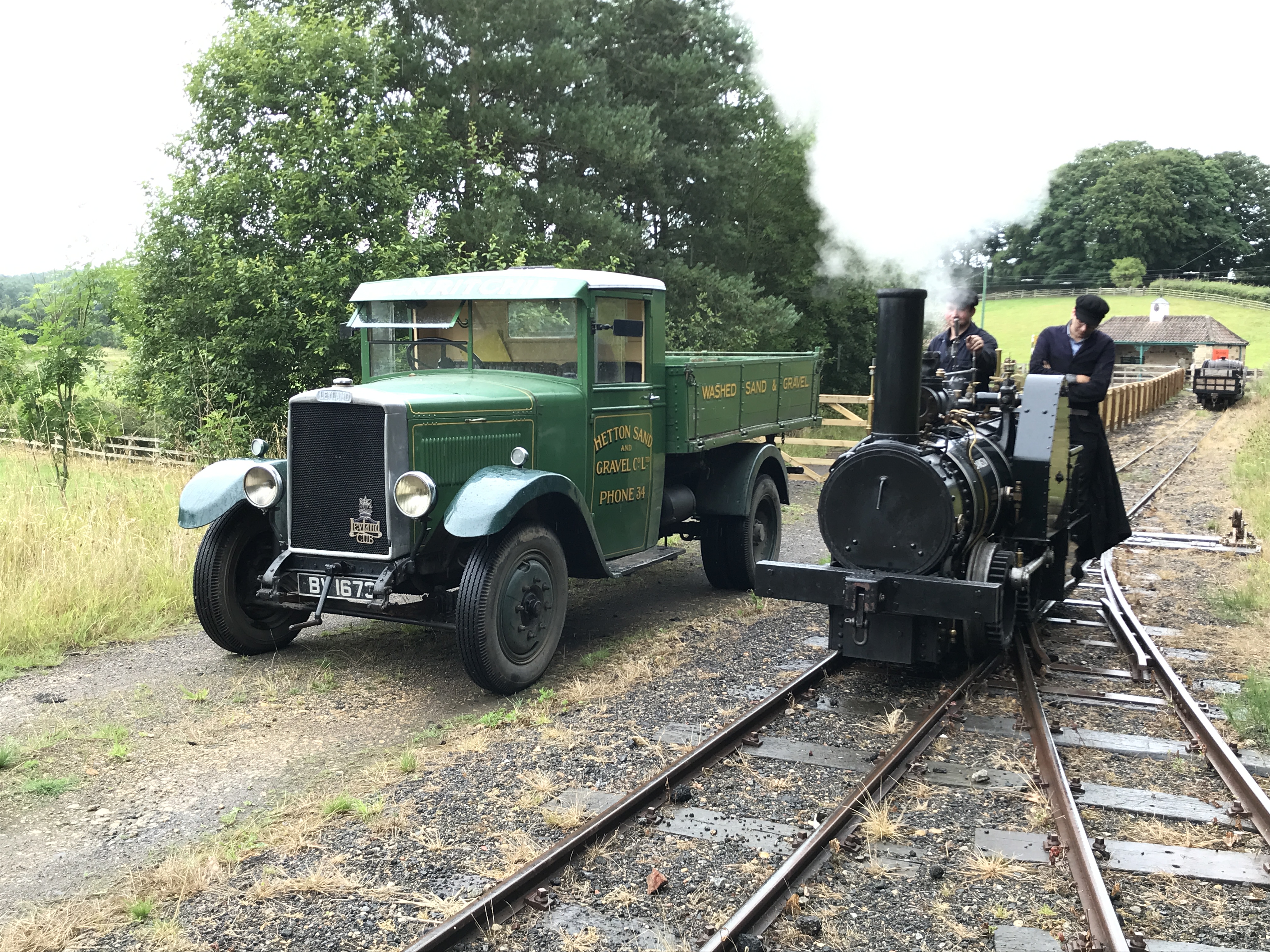 I haven’t managed to take as many photographs this week – the site being generally very busy with visitors (which is good!) and the back-of-house work not catching the eye (or camera lens) as much.  I’ve put together a short post, with some images that I think will be of interest to readers.  Fortunately Matt took some in the machine shop, and we’ve thrown a few in of our Friday afternoon activities, just to add some variety to the content.

Below: Some new road mileage for the museum – contractors are at work laying pavements and building the road that will serve the Front Street Terrace.  This will initially be a stub from the Pockerley – Town road, but in time will form part of a new network of roads around the 1950s area that is being developed to the south of the existing Edwardian town. 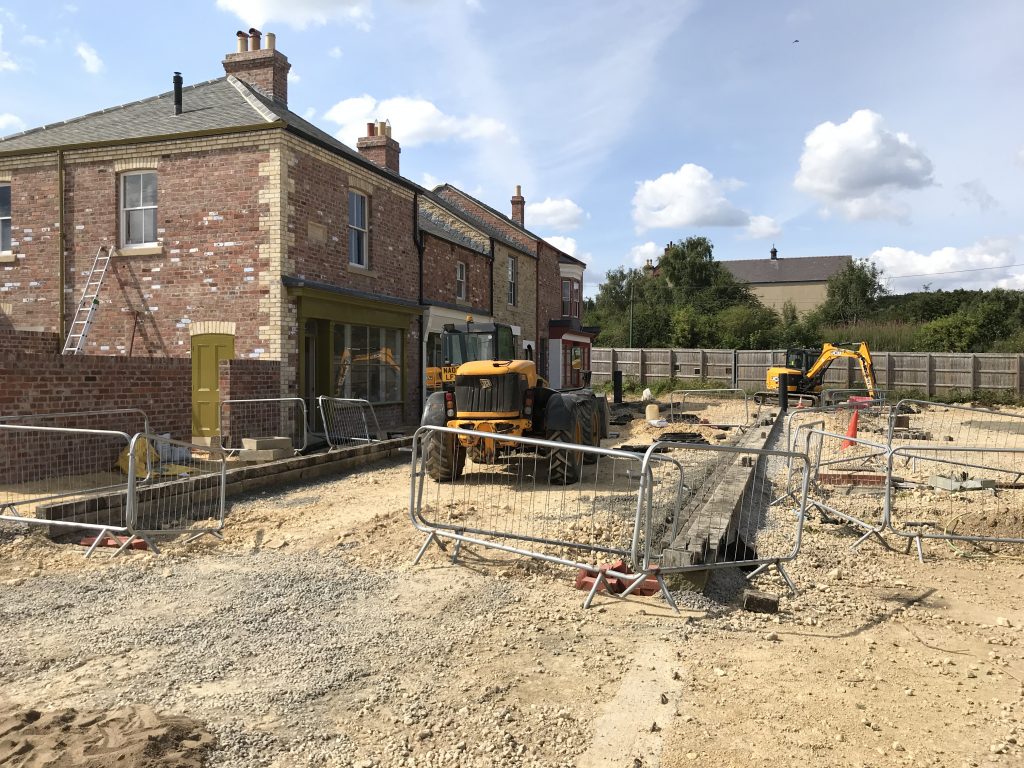 Below: Dan, with some assistance from Chris, has almost completed the machining of the new bottom tank for the radiator of the Fordson N. Next week should see the assembly of the radiator with the original top and side castings, with the new core and bottom tank. There is other work to carry out on this vehicle before it re-enters service but this was the largest piece of work required after its collision with a tramway traction pole. 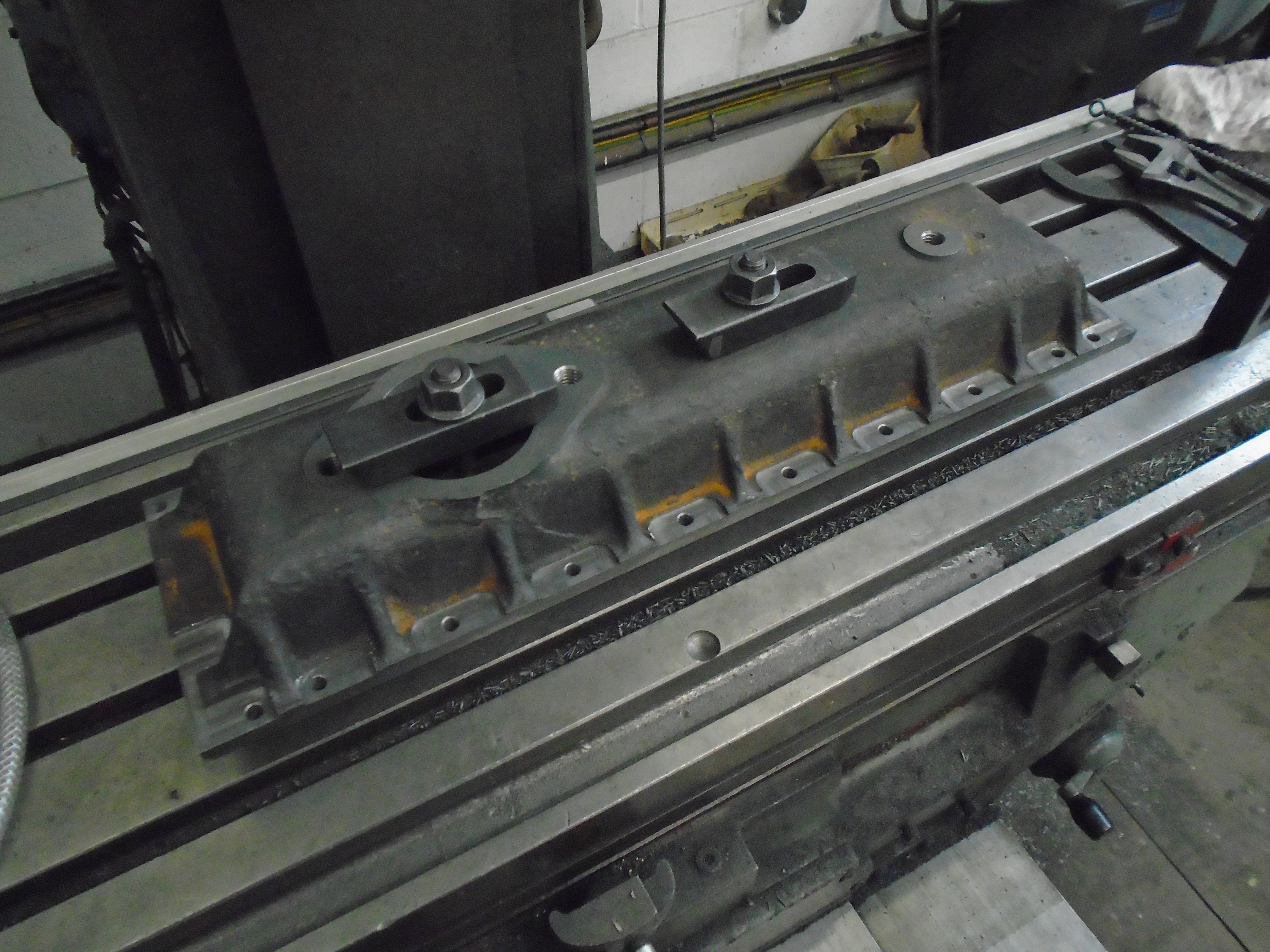 Below: Elsewhere in the machine shop, Don continues his work on components for Gateshead 10.  Matt promises a full write up of this package of work when the point of assembly is reached. For now though, for those with an interest in machining and interesting set ups the following photographs are offered. Here Don is using a smaller diameter tap as an internal full form screw cutting tool. They do have tipped, full form, screw cutting tools, but did not have the correct hand and pitch for this internal thread. This method has worked well, and saved the time taken to create a full form thread (with radii in the root and crests) with chasers after single point screw cutting (which leaves a sharp thread crest). 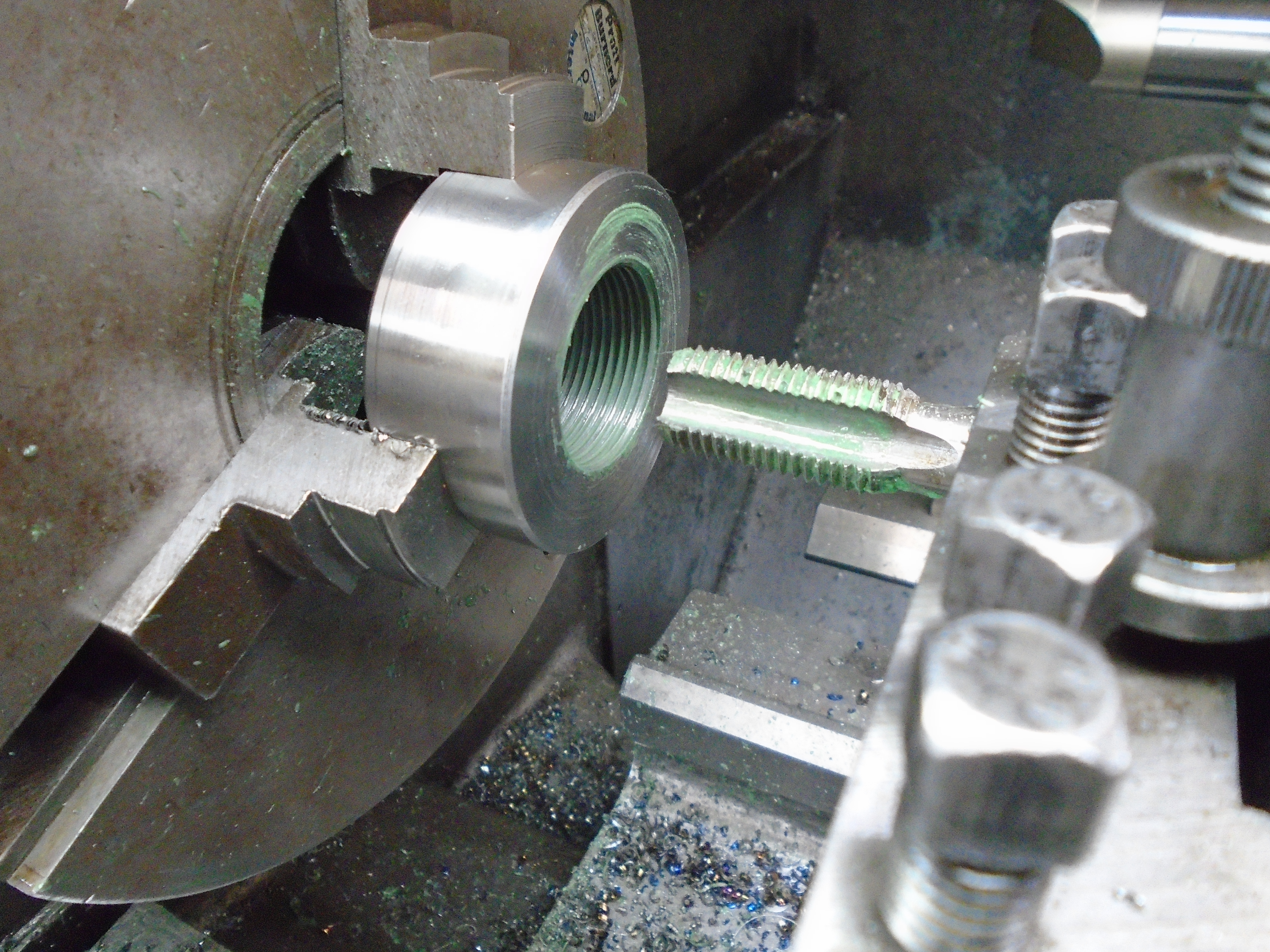 Below: Zoe continues to develop her skills on the borer. Having completed the horn faces on two of the four pony axle boxes (the other two are still in the process of being built up with weld), she has now set up to machine all eight (driving wheel and pony wheel) axle box brasses.  The set up here allows the brasses to be machined to the correct radius and depth. The sleeve seen supported on the vee block around the boring bar (to the right of the view) is one of those seen in a previous post.  It will be used to check the fit on the brass as machining progresses, supporting it in this way allows Zoe to test the two components together without disturbing the set-up.  Again, full details of this work to follow.

We knew Gateshead 10’s mechanical overhaul (rebuild in fact) was going to be a big job, and this has certainly been proven, with some of these jobs being individually quite involved and taking considerable preparation and set-up.  The axle box, wheelset, horn face and frame interface has been a very substantial job (probably one of the most complex undertaken by the Beamish team), but an end is in sight at last!  The work has involved the two machinists working 4/5 of a week, for several weeks.  It is interesting to note that when you read in the railway press or other sites about mechanical repairs, overhauls or ‘machining’, this is the reality – and it probably goes some way to explaining why the cost of such work is so high, particularly as these artefacts get older, more worn, and need greater restoration (in the truest sense of that word) to their original specification and tolerance.  I’m looking forward to Matt’s report on this sequence of work, which will appear here as and when the bogies are reassembled. 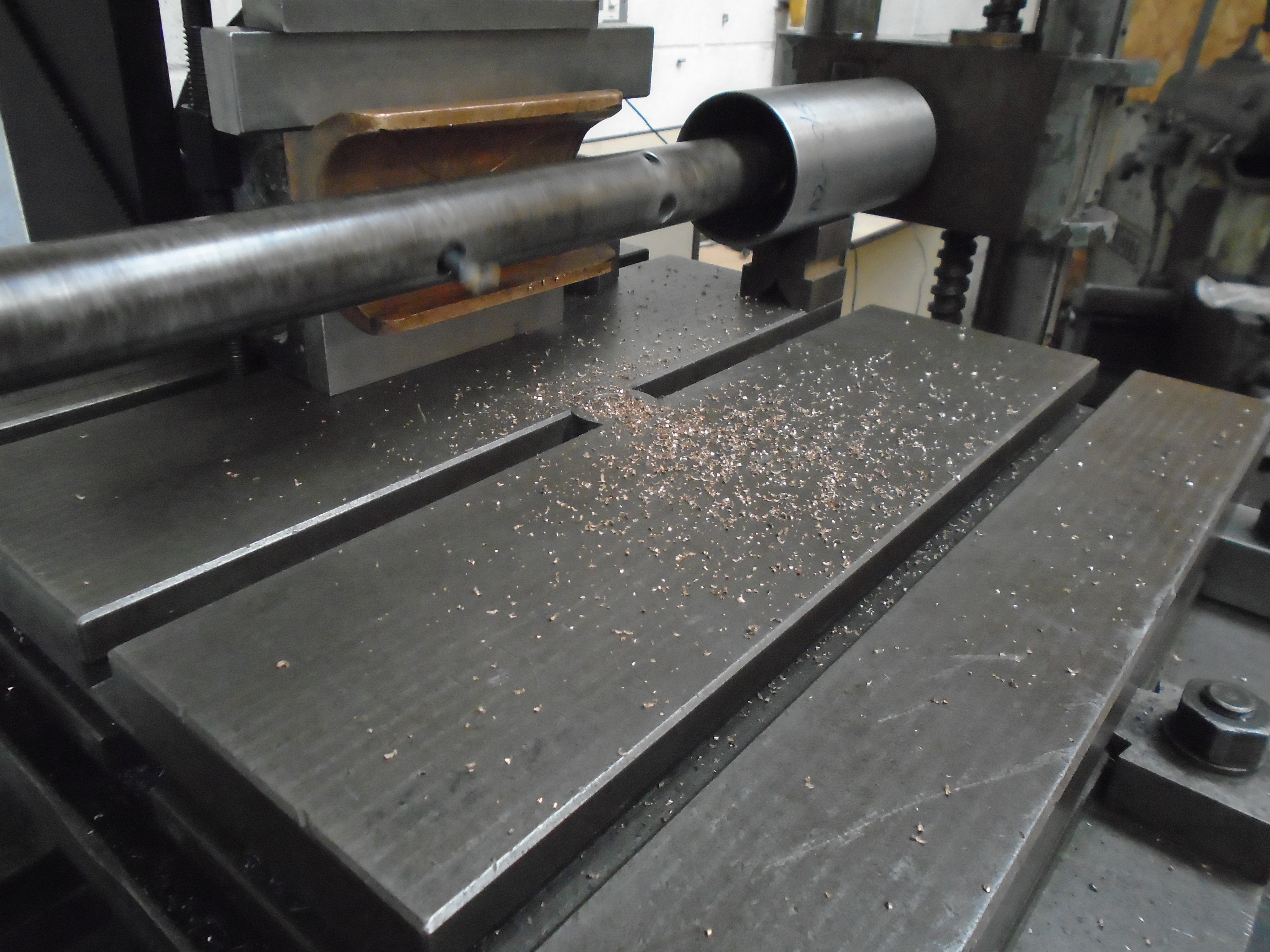 Below: A ‘quick’ job – Alan spent the best part of a day changing he head gasket on the Landrover used by the gardening team.  This was turned around and returned to them the next day. 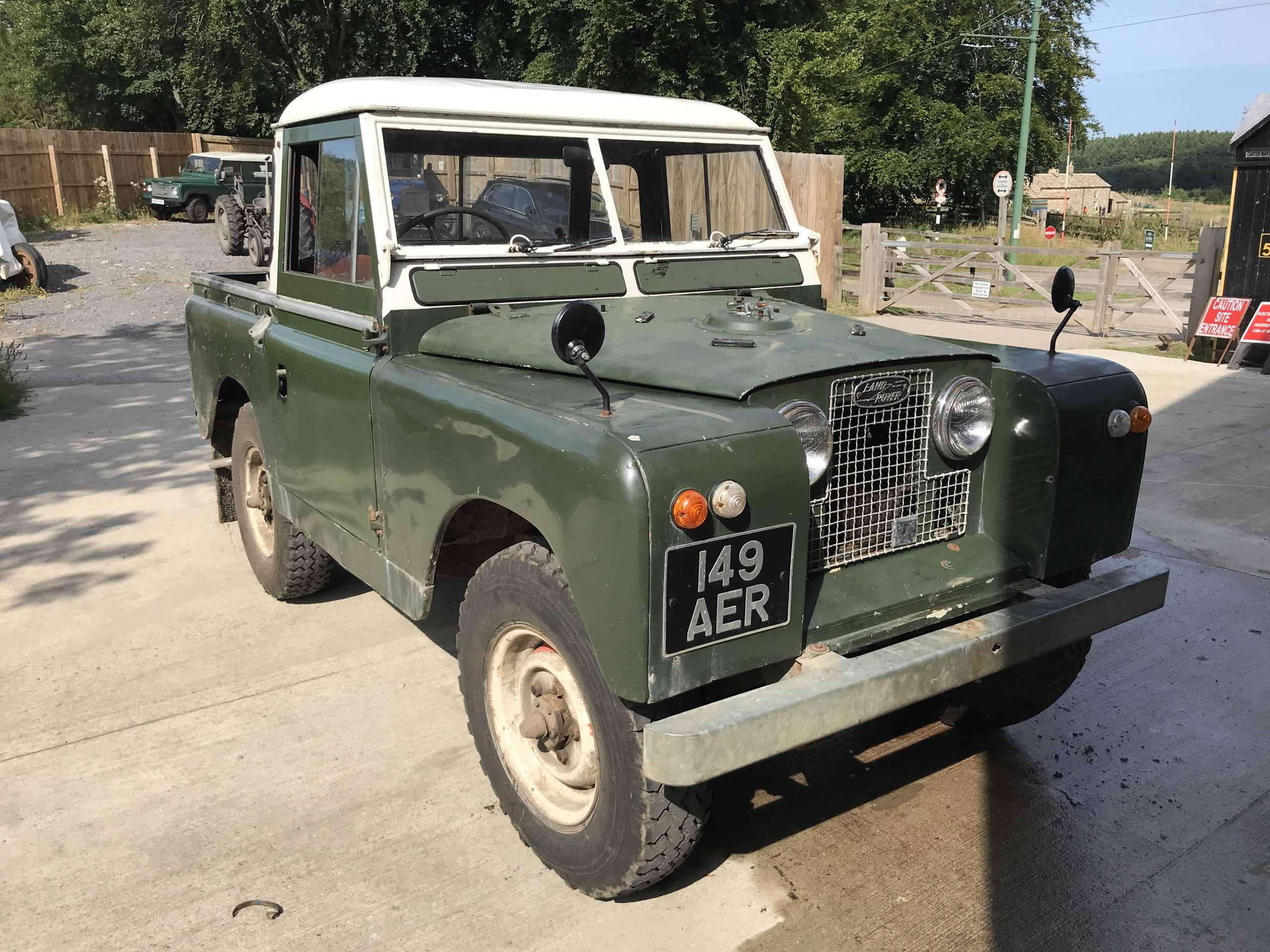 Below: We had a number of jobs to do that had accumulated on the ‘to do’ list, so Matt and I tackled these this afternoon, using the Leyland Cub tipper as our run-about.  First job was collect old pallets around the museum.  These appear on a daily basis, being left by contractors and delivery drivers (a healthy stocl always grows around the back of the tearooms).  We’re able to break these up and use them for lighting up steam locomotives, so they are worth collecting, and to be honest, I don’t think anyone else would, so its better all-round from a tidiness point of view!  After these were delivered to the Waggonway store, the new gates around the Colliery needed chains and securing loops making up, so that we can lock the railway off from the outside World to prevent trespass when we are operating.  Samson was in steam for testing of its safety valve, which tends to close quite slowly, so Antony was using up some steam when he passed us at Pockerley Bottom.

Below: Next stop, coal.  We went to the Waggonway for this and loaded as much as we could lift without completely wearing ourselves out, particularly as we then had to unload it the same way (the tipper mechanism would have been handy here, but it hasn’t been inspected for some time so we didn’t want to chance it – something for a future event though as it is a three-way tipping body). 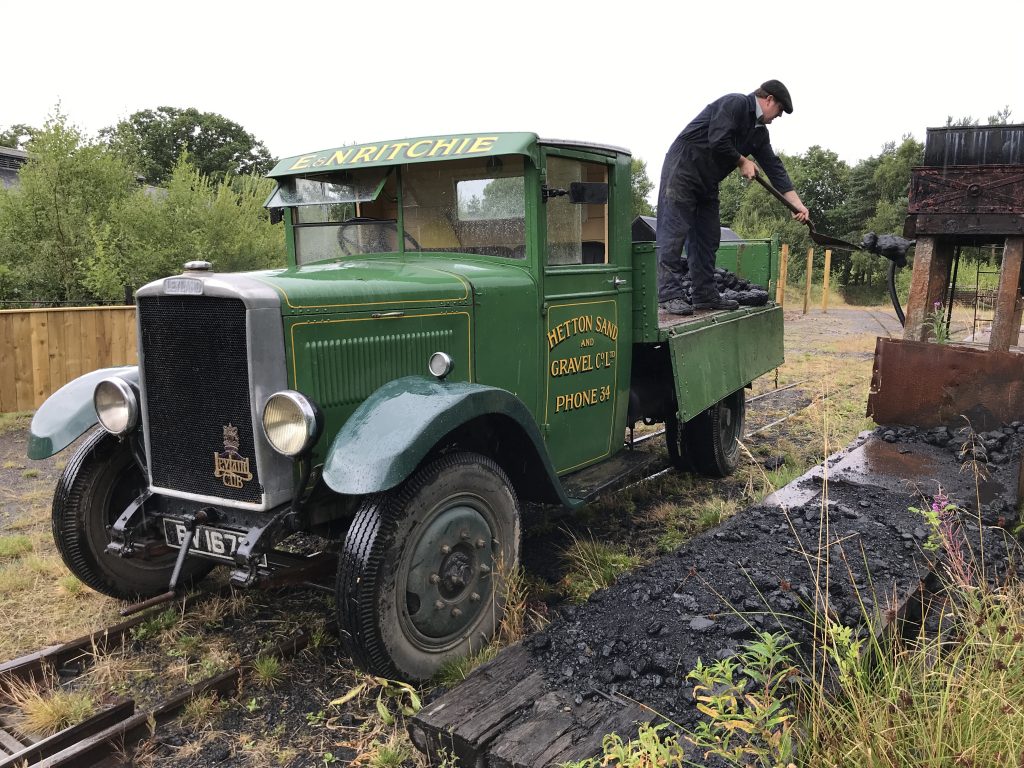 Below: As we’d been handling coal, and the lorry was dirty from recent use on dusty roads, a wash and shampoo completed it’s afternoon at work. 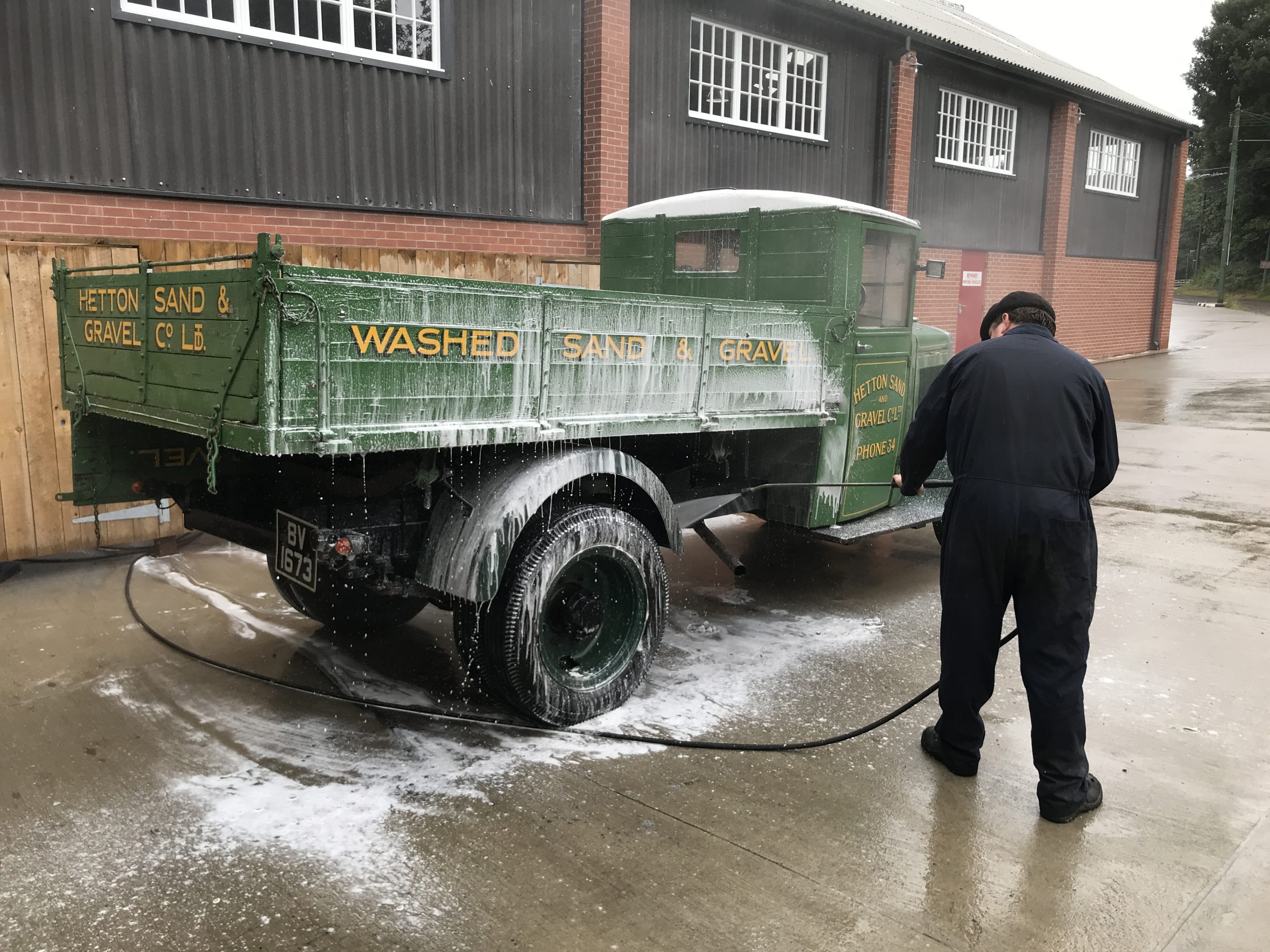 Below: It is probably only because they were so slow that obscured visibility like this when wet and warm didn’t lead to the concept of road haulage being abandoned!!!  Crouching down to see through the narrow aperture created by the open windscreen is no fun, and in this view the windscreen wiper is actually operating – there being more moisture inside, it has little change of fulfilling its role though! 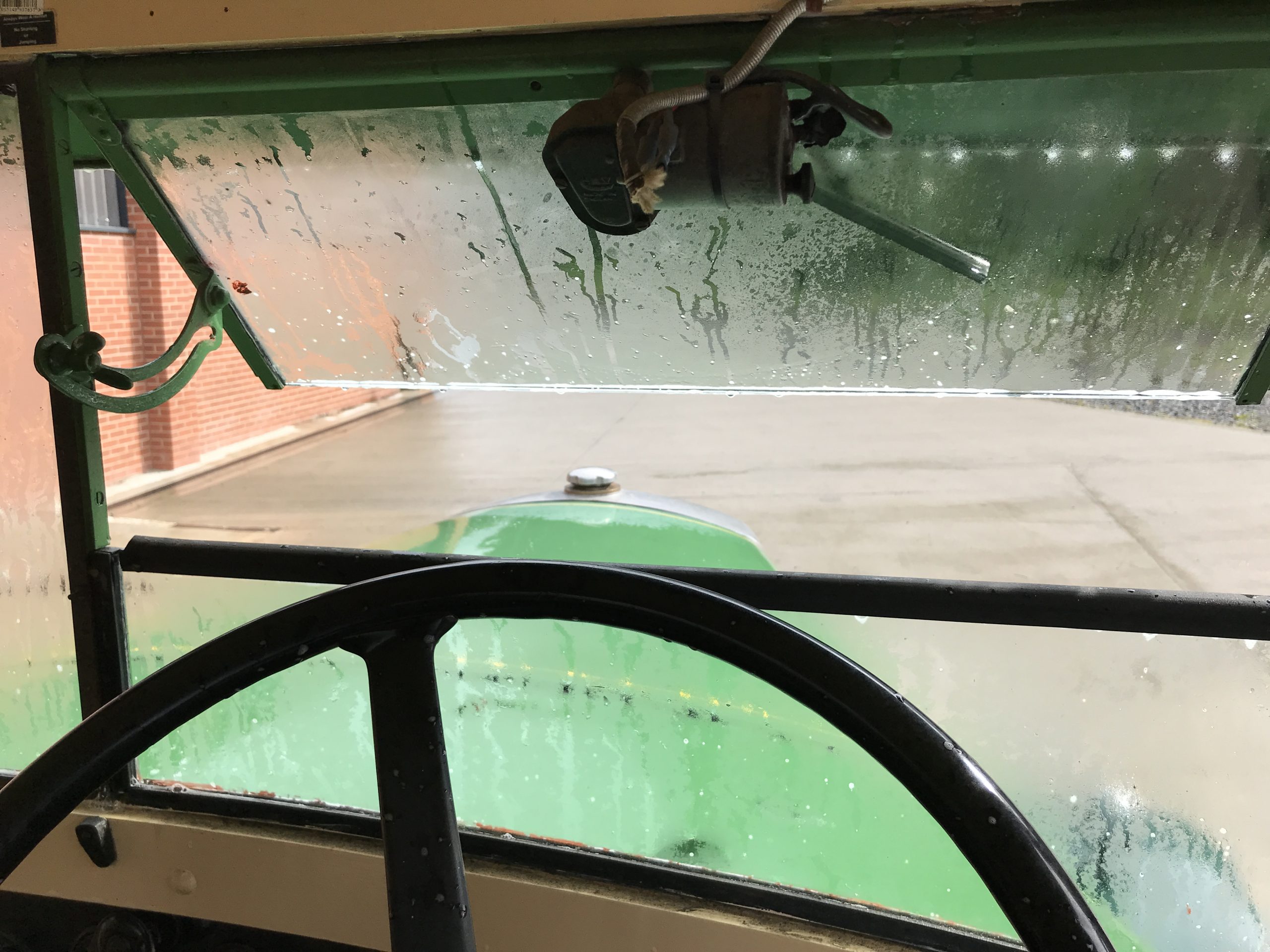 Below: We’ve seen a lot of the Cub bus lately, so here is a portrait of the Leyland Cub tipper! 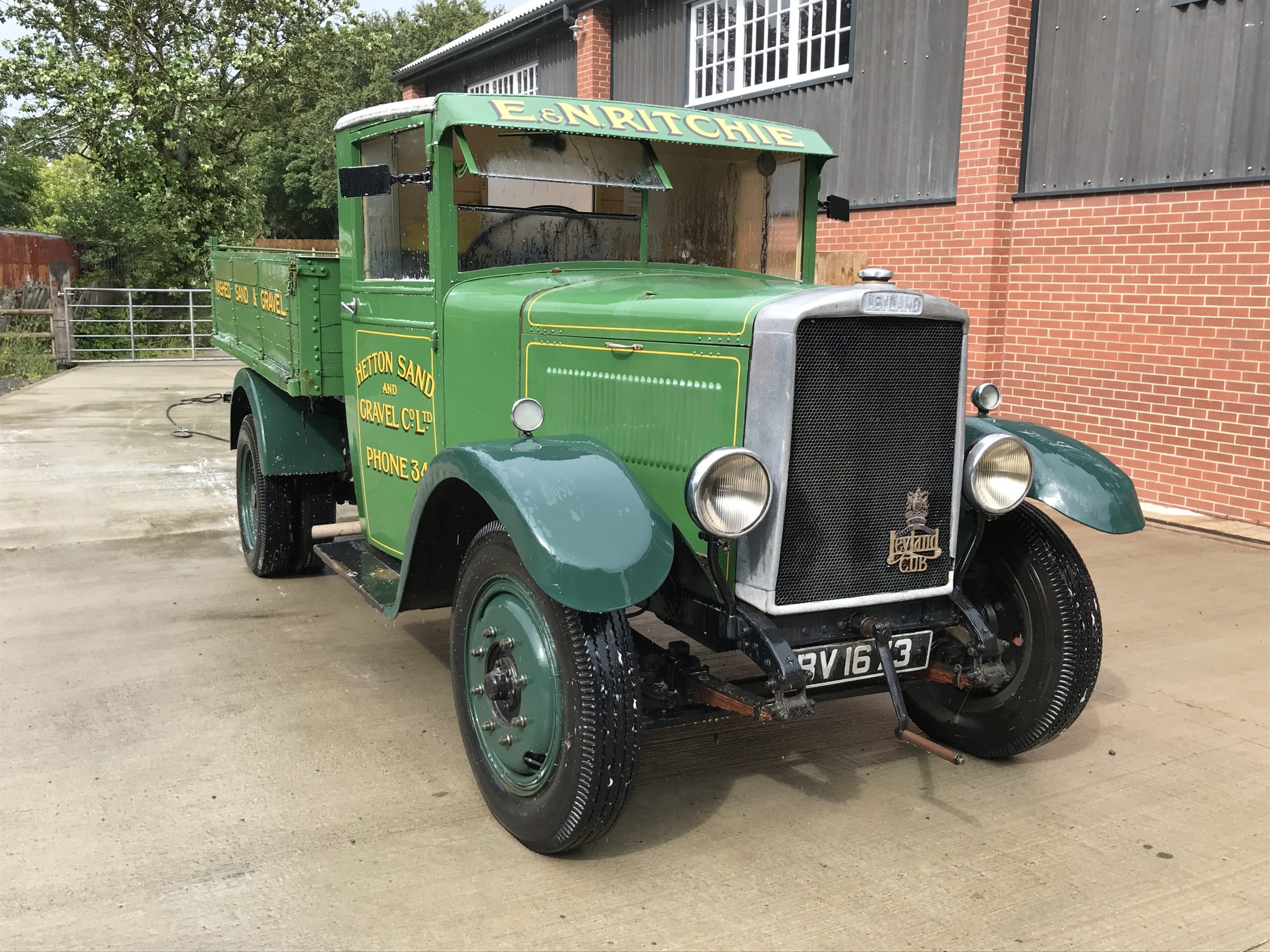 I visited Kirby Stephen East for a meeting about proposals for the overhaul of our NER luggage composite coach, 818 (which should be 3071).  Whilst there I was also able to see the restoration work taking place on the NER stores van (No.2) which was once a long-term resident at the museum, before being transferred to the Locomotive Conservation and Learning Trust, along with the J21, 65033.  See: http://www.lclt.org.uk/ner-stores-van.html

As can be seem the change in appearance is striking, with the stores van nearing completion. 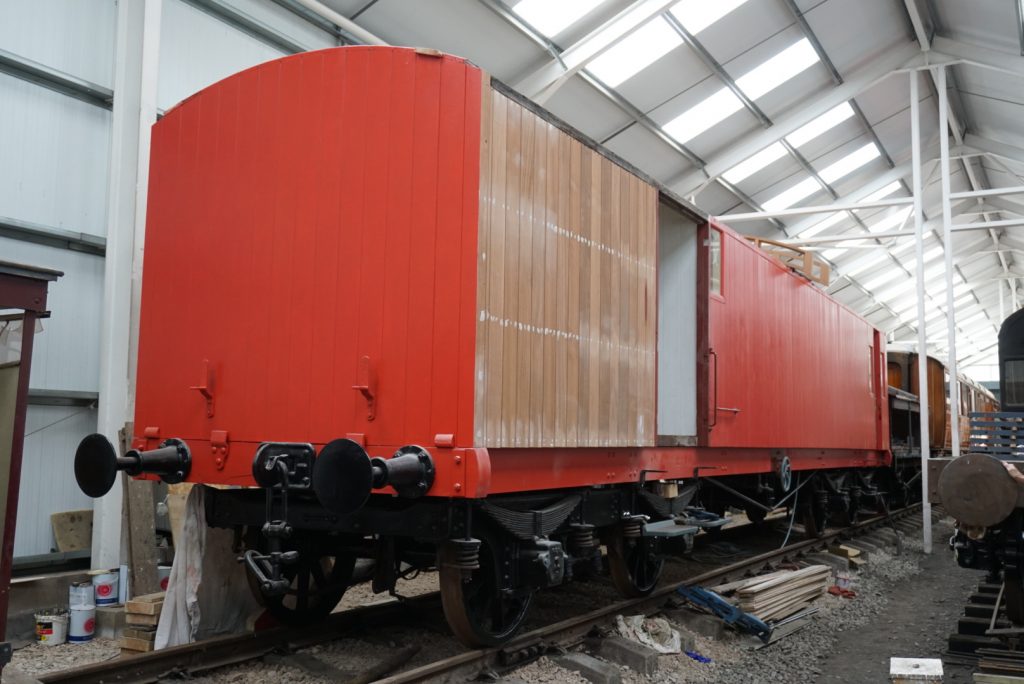 Below: Internally, the van has been completely rebuilt to the same standard as the exterior.  An exhibition will be installed within this space. 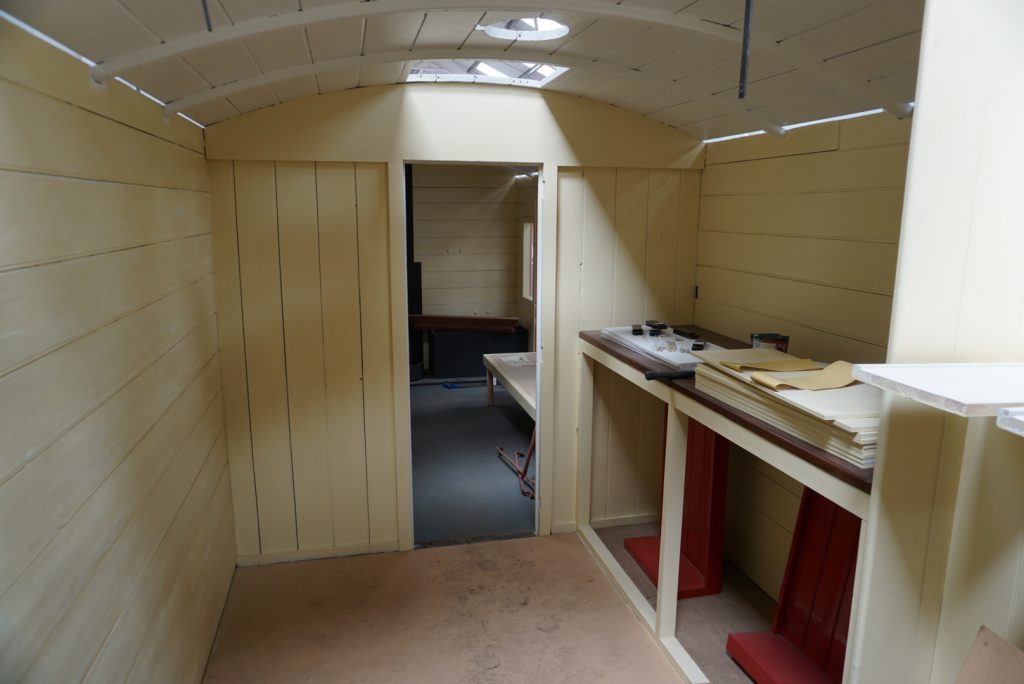 Below: A particularly interesting feature of the van, and an important element of the reconstruction to reinstate, is the raised ‘birdcage’ guard’s look out at the centre of the van.  Here the framing can be seen in temporary position. 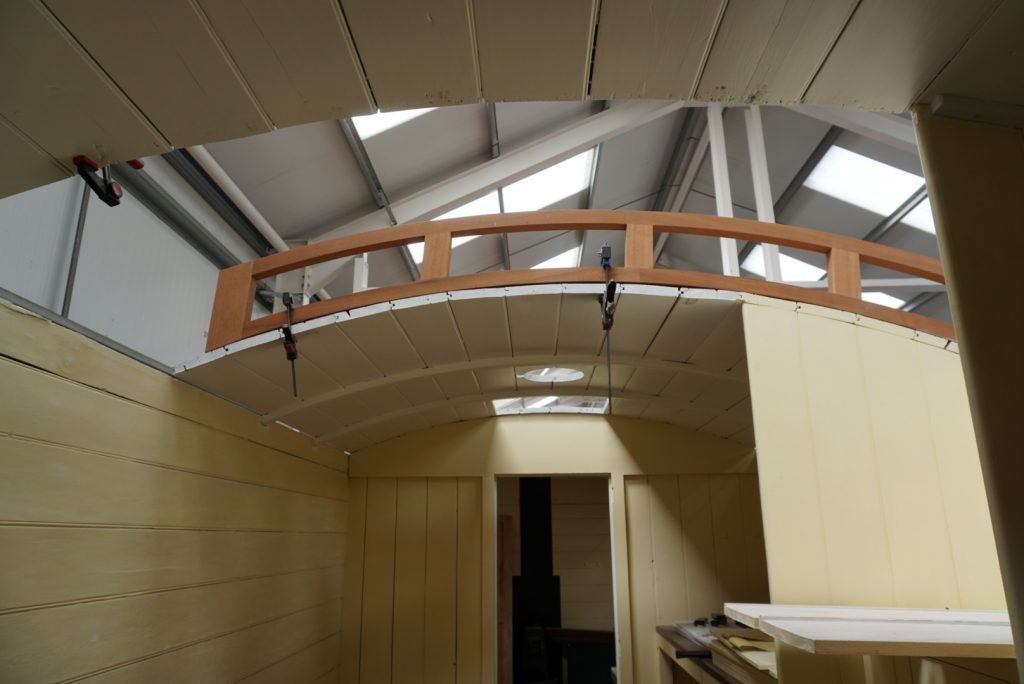 Below: The main reason for the visit was to view the work underway to assess 3071 (let’s use it’s most likely number and the one it will carry in due course).  Some years ago, water penetrated the roof canvas leading to quite extensive damage to some of the interior panelling.  Some of this has been patch-repaired during the last few years, but now a more robust solution is proposed, which will tackle the rot, fix the leaks and reinstate the internal panels.  Some re-upholstery will also be undertaken.  A mechanical inspection has revealed work needed on the underframe (though nothing particularly significant has been discovered thus far), whilst the coach will also be fully repainted.  It is hoped that substantial progress will take place later this year, with the team’s plan being approved, and so a start can be made. 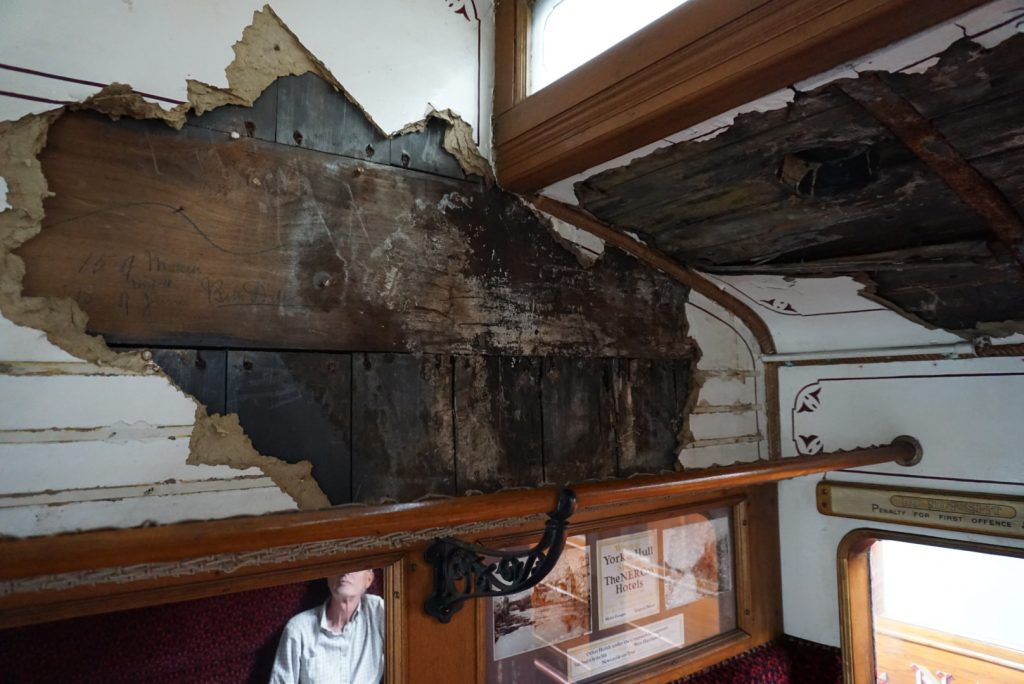